If you check out my About page, you’ll see that I have a past as a programmer and composer on the Commodore 64 and PC. I used to be part of the demo scene where loads of demos and chiptunes were released both to entertain and of course to brag about our abilities.

Although I stopped messing around with that stuff in the end of the 90’s, I still keep an eye on it in Facebook where I have several nostalgic friends that used to be part of this old scene. I have also liked a few relevant groups and fan pages.

One of the giants of the old Commodore 64 scene was Maniacs of Noise. They made excellent music both for demos and for games such as Cybernoid, Myth and Turbo Outrun. Their compositions and instruments were often of an unprecedented high quality.

Recently, Maniacs of Noise opened a fan page on Facebook, and here they posted a massive tune lasting 23 minutes with contributions from Jeroen Tel (NL), Mick Rippon (AU), Thomas Mogensen (DK) and Thomas Egeskov Petersen (DK). You can also check it out here:

END_OF_DOCUMENT_TOKEN_TO_BE_REPLACED

This is the second part (of four) in a blog series about what shows I’ve watched and what I thought of them. Just a few remarks for each of them. The text will be with only minor spoilers, so it should be relatively safe to read this in case you’re curious about shows you haven’t seen before.

Don’t miss out on Part 1 with an introduction as well as opinions about 24, The 4400, Alias, Battlestar Galactica (2003), The Closer, and Criminal Minds.

END_OF_DOCUMENT_TOKEN_TO_BE_REPLACED

I was reading the for the upcoming Update 3 for LOTRO the other day, and one thing immediately caught my eye:

“Fog of War” on the world map no longer exists. You will now be able to see the world map in its entirety without having to visit every area.

I guess a lot of players would immediately find this to be a nice change. No more guessing, no more not knowing. It also fits with the latest trend of dumbing down our MMORPG bit by bit. But it actually saddened me, even if the “Fog of War” in LOTRO was only the crude version.

Is “Fog of War” in MMORPG slowly becoming an endangered feature, soon to be extinct?

My opinion about blogging after four months: 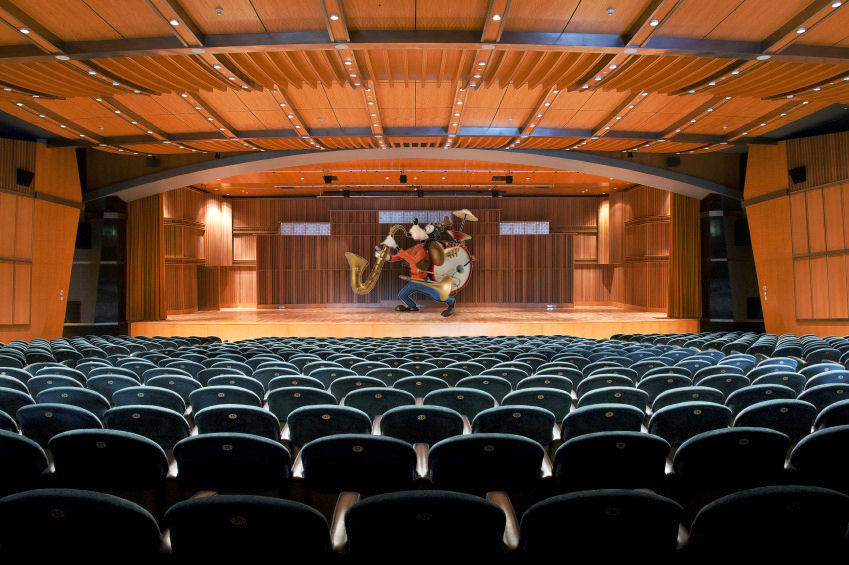 END_OF_DOCUMENT_TOKEN_TO_BE_REPLACED

One of my favorite pastimes is to watch TV shows from one end to another. That’s the great thing that this millennium brought with it – season boxes with several discs, making it possible to watch the shows continuously without the fear of missing an episode.

In the beginning I went crazy and watched maybe four of six episodes one weekend and then another batch again after a few days. Later I learned to save the better TV shows, especially as I started having trouble finding the good ones.

I even have a movie night each week where I watch selected shows together with my family. It’s a tradition we’ve had ever since the first season of Lost was released, and throughout the years we’ve been through a lot of shows. I always buy the cakes for the 9 o’clock coffee.

So, I’ve decided to write a series of blog posts about what shows I’ve watched and what I thought of them. Just a few remarks for each of them. The text will be with only minor spoilers, so it should be relatively safe to read this in case you’re curious about shows you haven’t seen before.

There will be four blog posts about the season-based TV shows (listed alphabetically):

Click a link to immediately jump to the section about that particular TV show.

I’ve discarded a lot of shows to get down to these four parts. Some of them were skipped because I’ve seen too little of them to comment on them, while others have been skipped because of being too old – I wanted the series to be about relatively modern shows. I have seen all the Star Trek spin-off shows too, but I thought that perhaps they should have their very own blog series at a later time. Star Trek has a special place in my geeky heart and thus deserves a special treatment.

So, without further ado, let’s start with…

I was reading a new blog post by Tobold and found a link to a pretty disturbing preview of Star Wars: The Old Republic. This is a promising MMORPG developed by none other than BioWare; the creators of so many excellent single-player RPG. I loved the two Knights of the Old Republic games. Needless to say, I’ve had my keen eye on this MMORPG ever since it was announced.

And then this preview pops up with unsettling news about how the game actually plays. Here are some quotes from the preview that I took special notice of:

Our opinion of The Old Republic, formed over two solid days of playing, is that it’s one of the most boring titles we’ve ever had to endure. It’s plain and staid and deathly dull. It’s both exactly the same as every other MMO we’ve played, but at the same time so much worse because it promises so much more.

Okay. You’ve got my attention now. 😯

What would have normally take an hour or so in a standard RPG now takes an entire day of play. The local Jabba stand-in always has one more errand to offer you.

We found ourselves wading through an almost obscene amount of combat too, usually against the type of wild beasties and bandits that typify every RPG, ever – but in greater quantity and in an area which felt far smaller. In some cases we’d clear out an area, walk into the next room, turn back and face the exact same enemies we’d killed only moments before. Once or twice we even saw foes respawning over their own corpses as conversations distracted us – very, very anti-fun.

These two quotes had me worried a lot because this is one of many reasons I’m not having as much fun in Rift as I’d like to. Too many mobs all over the place, fast respawning, and frequent revisits back to the same area for just another solo boss to be killed. Looks like I’ll have more of that in SWTOR, whether I like it or not. Sigh.

There are many other interesting paragraphs about the game in this preview. If you’re just remotely interested in the game, I really recommend you read it.

Basing an opinion on just one preview is not wise, of course, and I’ll still have an eye on the game as it moves closer to release day. That the game is going to reuse a lot of common theme park rules – well, we already knew that. I was hoping that the story elements, the universe, and the developer’s experience would still add something unique and refreshing to the genre.

Come on, BioWare, old buddy, don’t let me down!

I found this wonderful image posted by Haaken at the official Rift forums: 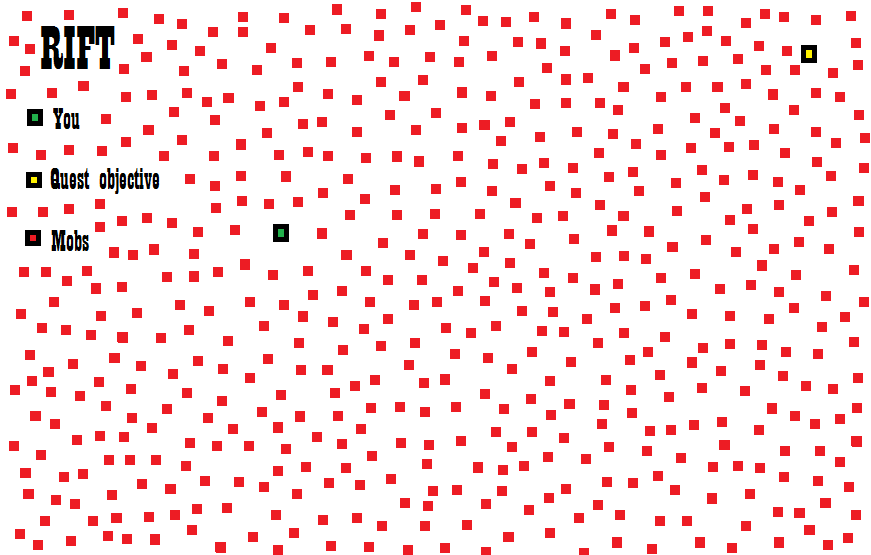 A few days ago I was exploring the northern ridge of mountains in Droughtlands, partly looking for cairns and artifacts as usual, but also to see if I could peek into the forbidden gray area north of the zone. Needless to say, there were lots of invisible walls and of course an insurmountable final ridge. But much to my surprise, I did manage to get close enough to notice weird names pop up on the map of the forbidden Neverland. Actual roads? Real areas? Your guess is as good as mine.

What I’d really like to know is, why did the zone designers bother to add these names? Did they originally want to have more zones, but eventually had to cut back in order to reach a deadline? Or did they just start building a zone for an upcoming expansion (or patch) while having some sort of invisibility flag on, only to have someone like me discover a bug in the invisibility mode?

Maybe it’s caused by some sort of algorithm that dumps the names on the entire continent like salt and pepper. But does that really make sense in a world that has probably been handcrafted?

Perhaps they added them to see if blog posts like this would emerge, pondering their existence. 😉

END_OF_DOCUMENT_TOKEN_TO_BE_REPLACED

I’m now level 41 and barely started in snowy Iron Pine Peak with lots of chilly winds coming out of my loudspeakers. Droughtlands and Moonshade Highlands are both behind me. Since most rifts are often conspicuously left alone on my shard, I decided to do quests in both of those equal level zones to avoid hitting orange quests. I also tried healing in a dungeon (King’s Breach) but soloing has occupied 99% of my time in the game.

The more I play, the more I have to say that Rift doesn’t rub me quite the right way. It’s indeed very slick, beautiful, it has an impressive range of features for such a young MMORPG, and the rifts are a lot of fun to do with many players. Soloing with quests drags the game down, however, and I’ve seen in reviews and on other blogs that the game generally gets a lot of criticism in this area. There’s something about the quests that feels like working in a factory. Here, have these five quests. Go to these yellow circles over there and complete them. Return and deliver. Get another five quests. Go to the yellow circles right next to where the other yellow circles were. Rinse and repeat.

Quest grinding is not a new thing and I’ve seen the like in other MMORPG too. It can be spiced up with more imaginative quests (Wrath of the Lich King and Cataclysm), intricate story lines like the book quests in LOTRO or just with enough variety to keep it interesting. In Rift, not only does it feel a little like a job, there’s also something about the game itself that feels shallow.

In both LOTRO and EQ2 I’ve been happy about the atmosphere because it actually feels like an interesting fantasy or alien world. Sometimes this can make all the difference. I played Morrowind for a long time after the quests were pretty much completed, merely exploring various caves just because the world felt so intriguing. In Rift, the world feels exactly like what it really is; a game world. Nothing more. When I’m climbing the mountains looking for artifacts, cairns and hidden puzzles, I’m not really walking on mountains. I’m walking on polygons and textures.

END_OF_DOCUMENT_TOKEN_TO_BE_REPLACED

Here’s something that’s been nagging me for quite a while in various MMORPG. Take a look at the stuff sold by this barterer in Lord of the Rings Online (in Caras Galadhon in Lothlórien): 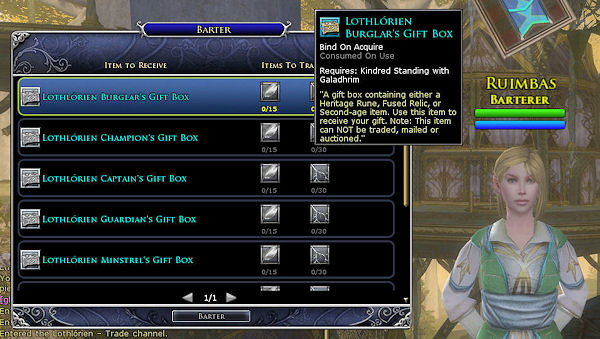 These items sell for quite a lot of tokens. Would you ever want to waste use anything this precious without knowing exactly what you get?