Once upon a time, back in May 2005, I logged on my Paladin in World of Warcraft. I went to Silithus to grind Dust Stormers in the hopes of acquiring a few drops of Essence of Air for crafting. It was tedious business as I had to kill a lot of them for just a few measly drops of those, but that’s what I did back then and I actually enjoyed it.

But just as I started killing the umpteenth Dust Stormer, my World of Warcraft client froze. Oh no, I thought – it’s going to disconnect, and when I return, I bet the Dust Stormer finished the job. I was right. Disconnect, relog – and my Paladin was dead. Cursing and shouting commenced.

Being killed because of a disconnect was rare for me back then as it is today, as I usually make sure I have a stable computer and ditto internet connection. Not much I could do about it anyway, so I ran back, resurrected, and continued killing Dust Stormers. A few minutes later, something extraordinary happened; one of them dropped an epic item. This one, to be precise: 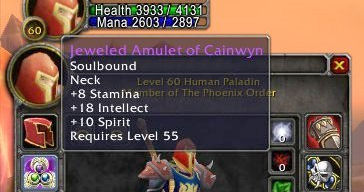 It doesn’t look like much today, but back in 2005 it was pretty good. It cheered me up and I instantly used it, but it also had me thinking. Was a GM looking over my shoulders, saw me disconnecting, felt sorry for me, then decided to make it up for me? Nah. Probably just a coincidence. Occam’s Razor and all that. I continued grinding and that was that.

Fast forward to May 2011 – actually it was just yesterday. I logged on my Cleric in Rift. I went to Shimmersand to do some solo quests for XP, as I was only level 48 (still not quite there yet). Killed some basilisks around a pond and a few humans. I took another look in my quest log and saw that I needed to kill four Volcanic Flames, so I walked into the relevant canyon and spotted one.

Hm. It’s elite? Strange. Perhaps there’s a trick about finding a thing that will weaken them, so I didn’t think more of it and walked past a few of them. Then I took another close look at one of those fire elementals. It was indeed elite, but it didn’t look all that tough. Only about 11K health. I decided to give it a try and pulled it. It was a tough fight and I had to use a few potions, but I actually thought I was on top of it. I could have won it.

But then the game client froze. Oh no, I thought – it’s going to disconnect, and when I return, I bet the fire elemental finished the job. I was right. Disconnect, relog – and my Cleric was dead. Cursing and shouting commenced.

I thought this felt familiar, but never mind. I took a look in my quest log and only now I realized that the quest was for groups of three players. Bleh. I abandoned it and went back to the pond to kill some more basilisks and humans.

And then, just a few minutes later, this item dropped from an unimportant solo mob: 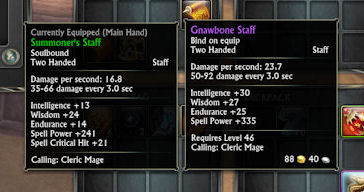 Not only was it an item I could use for my class, it was also a pretty cool update. How convenient, wouldn’t you say? I’m not buying this anymore, developers. You have some kind of “Disconnect Gift” algorithm going on, don’t you? If someone is disconnected in the middle of a solo fight and dies, you activate a high chance of getting an epic item within the next few minutes. Just as some sort of apology and to make sure the player doesn’t do anything stupid like, say, rage quitting.

Actually, this could still all be a coincidence and I just got lucky both times and there really is no trick going on. But how about you? Have you ever had a suspiciously cool drop in an MMORPG shortly after a death due to e.g. a disconnect?