END_OF_DOCUMENT_TOKEN_TO_BE_REPLACED

Finally a game that made me very happy to still be a PC gamer. This one was fascinating and had me glued to the screen for the two hours it lasted. Sure, that’s not exactly long – but the main gimmick does get a little exhausting and so I was actually glad it wasn’t longer.

As a first person exploration game, I spawned in a tent in the bottom of an enormous cave system. The tent itself had the only static light in the entire game. Outside, I picked up VR goggles and a hand-held scanner. The scanner could be activated to shoot out a cluster of lasers for drawing dots on the walls of the cave. Holding the scanner in the same direction added more dots for more details. 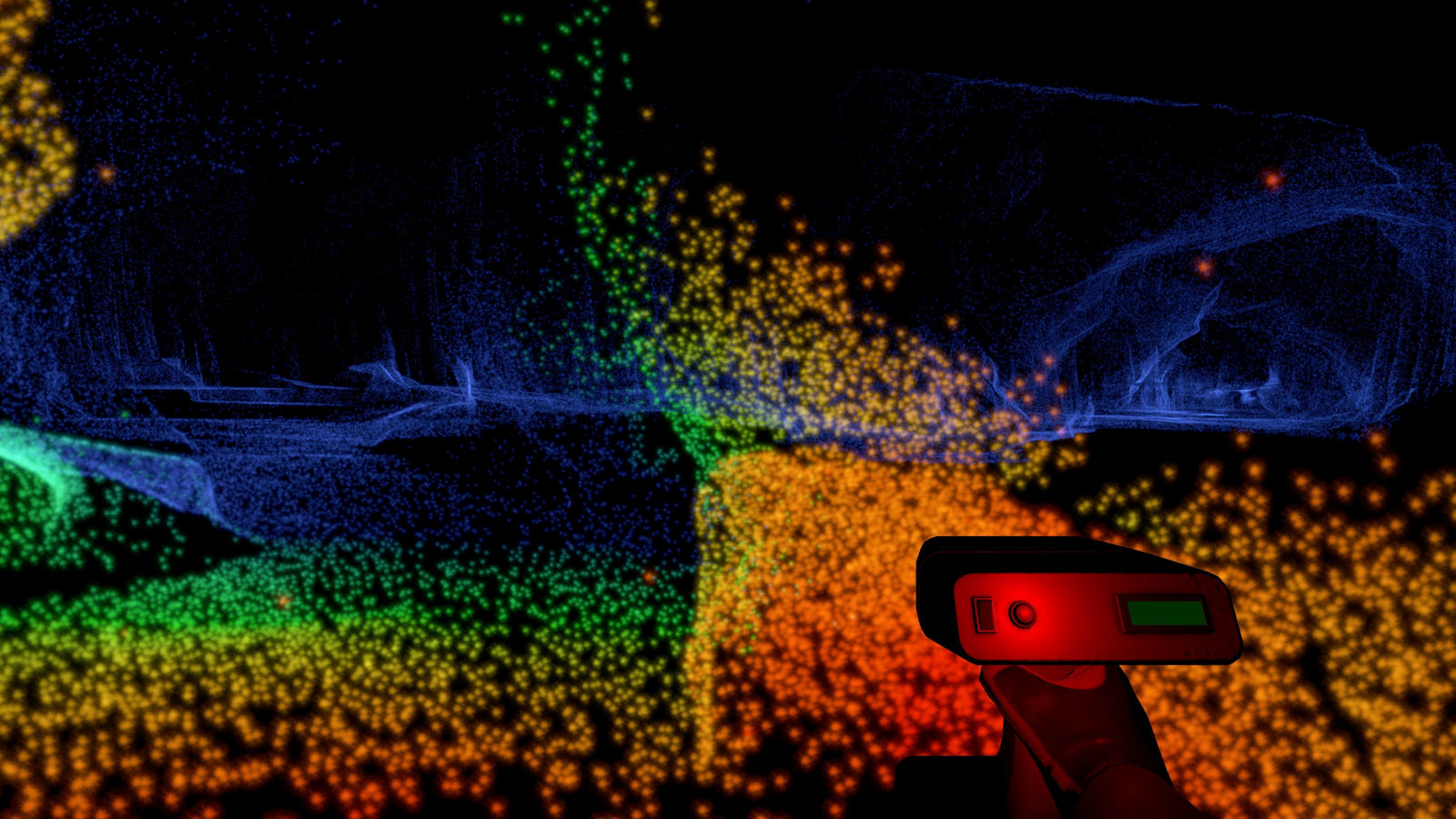 It was quite clever and immediately made the cave feel deep, vast and unexplored.

END_OF_DOCUMENT_TOKEN_TO_BE_REPLACED

I completed this short facile adventure in less than two hours.

It was a first person horror game taking place in a dark and foreboding abandoned amusement park. As a mother, I was looking for her son Callum that ran away from the car and into this park. I could call to him with the right mouse button, but he never came back. He just wanted me to follow his lead.

Along the way I came across various dilapidated big amusements such as a slow swan boat, a ferris wheel, a roller coaster, etc. I could even ride most of these, typically while the mother told me about her strained relationship with her kid – or a story told in some other way. 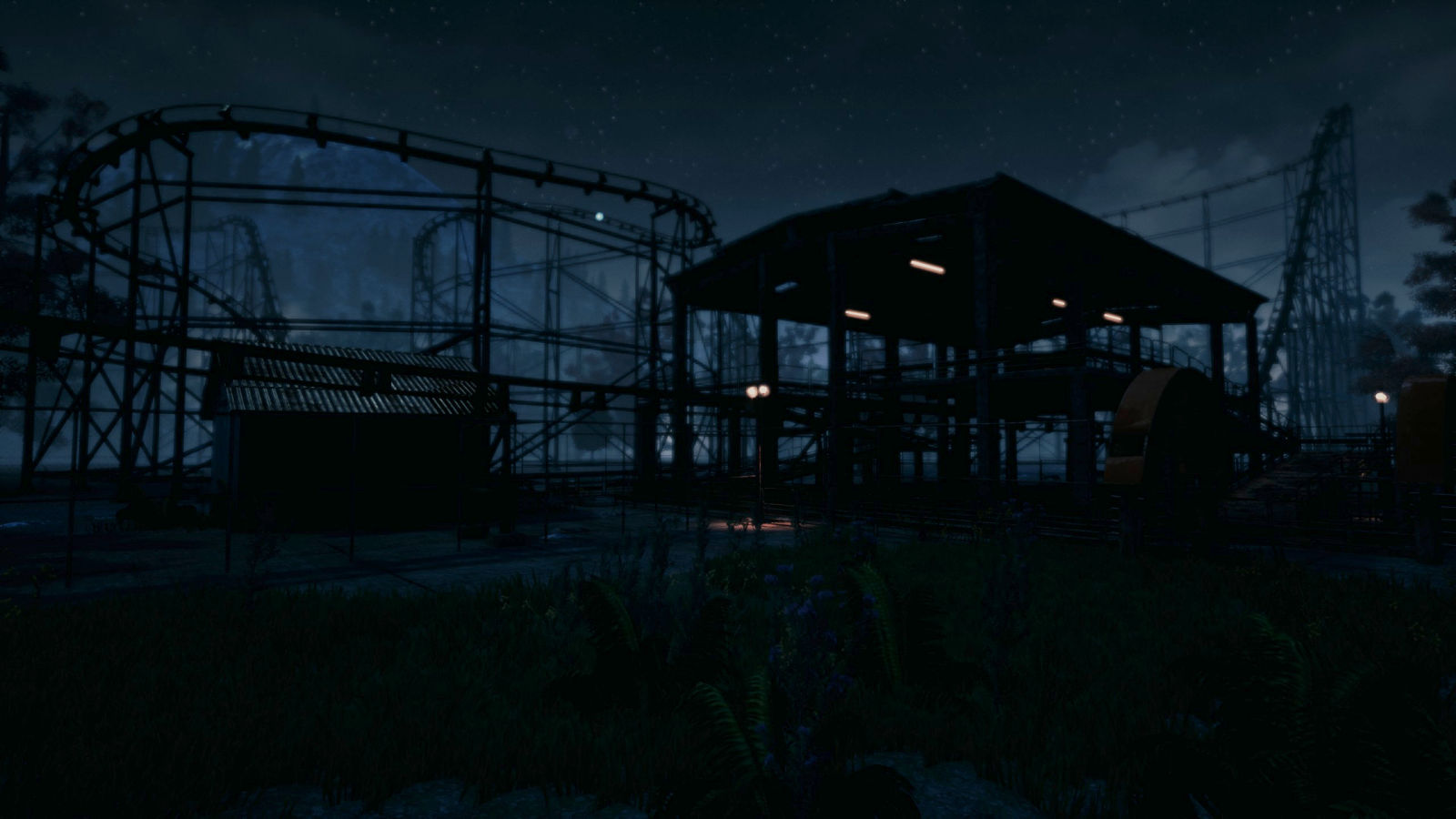 This wasn’t exactly the most engrossing game of its kind. It was linear and also very low on interactivity. I could barely click to read letters along the way. That was pretty much it. It did have a few jump scares and a good ambient background sound, but if you follow my blog, you know it’s almost wasted on me. I didn’t get spooked even once. In fact, I sometimes wonder why I keep playing these types of games at all.

END_OF_DOCUMENT_TOKEN_TO_BE_REPLACED

This was a free expansion to STASIS, or a standalone DLC if you like. It took place in the same universe and had much of the same gameplay, graphics, atmosphere and mechanics. It too had static isometric screens that flipped to the next by the exits. A lot of PDA diaries, a quantum inventory, mostly on my own…

A lot of it was indeed more of the same.

This time I was in control of Hadley, a young woman pregnant in her ninth month, as she woke up in a sinister laboratory. Like in STASIS, I had to find my way around the dilapidated facility with almost no one around. This time I did meet a couple of humans on my way, but mostly I was on my own – except for a dark voice in my head. It didn’t take much pondering to figure out where that voice came from. 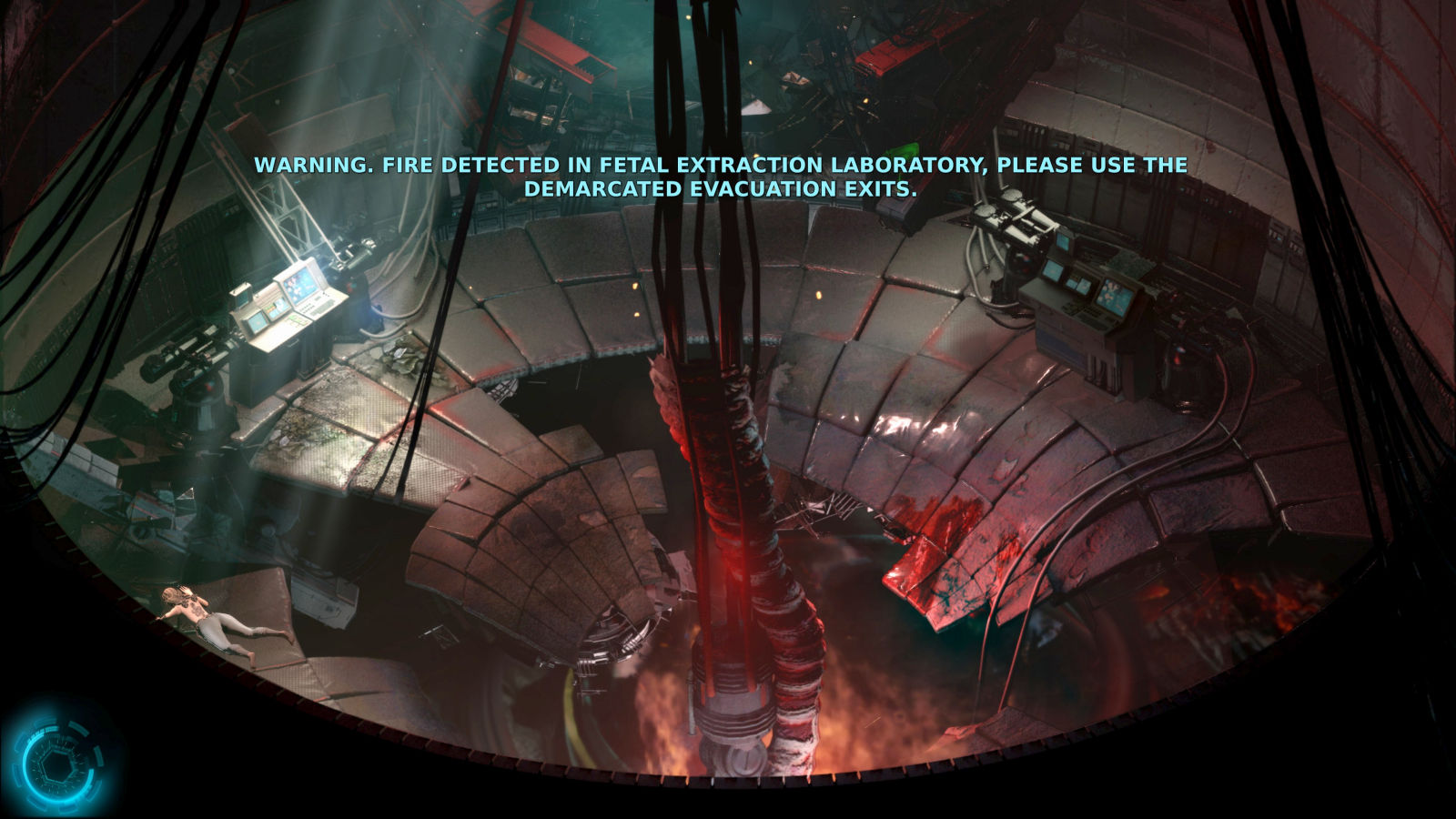 While the atmosphere and the story was still good and most of the puzzles were logical, I must say that I didn’t enjoy this one nearly as much as STASIS. It had a big font that looked uninspired, as if it had merely been slapped on in a hurry. A few puzzles also crossed logical boundaries that STASIS for the most part honored. Especially a blueprint puzzle by a locked door was quite the stretch.

END_OF_DOCUMENT_TOKEN_TO_BE_REPLACED

This game had the most excellent sinister atmosphere with a great background soundtrack to go along with it. It reminded me of both SOMA and the old In Cold Blood – both great games to be associated with.

It also felt quite oldskool, like it belonged in the same time period as that latter game. The lovingly detailed isometric screens were static and flipped to the next by the exits. A quantum inventory could be brought up from the bottom left corner, and it even had manual save games. Pointing and clicking was as simple as doing just that. Sometimes I could view a PDA, or a console with a few commands (or a puzzle). 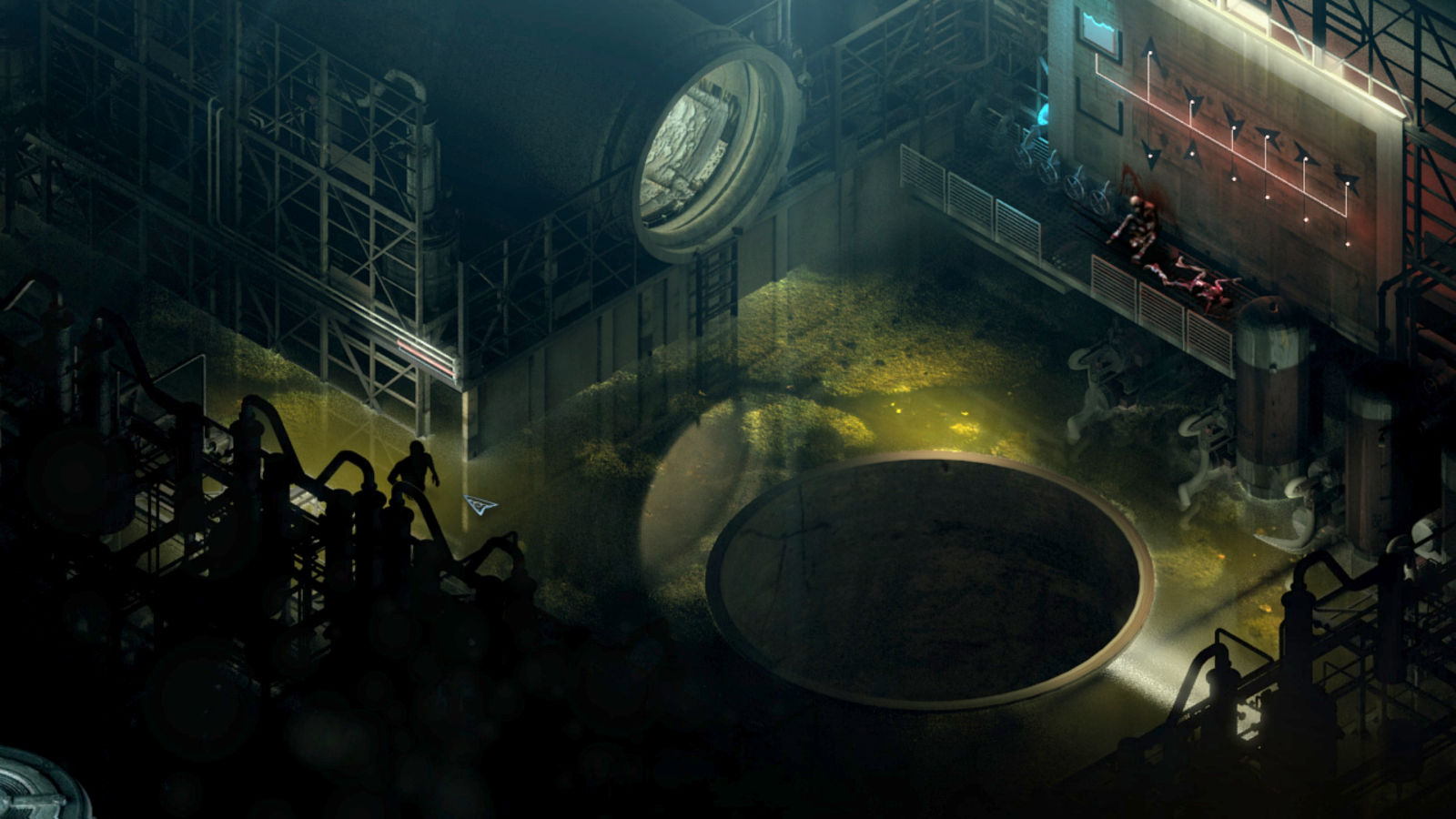 The story took place on a dilapidated spaceship, almost abandoned, with skinned corpses to be found and bloodstains everywhere. You probably know the drill. As the flappable protagonist John, I woke up when a stasis tube broke. I was slow and prone to a cardiac arrest. After getting fixed at a medical bay close by, I could run when double-clicking the exits. John had a wife and a kid. Where were they?

Time to go searching for them.

END_OF_DOCUMENT_TOKEN_TO_BE_REPLACED

This was learning towards being both a kids game as well as tablet first, both of which normally doesn’t sit well with me, but it was so damn cute and charming that I couldn’t help myself completing it anyway.

It also felt very much like a spiritual successor to Zanzarah. 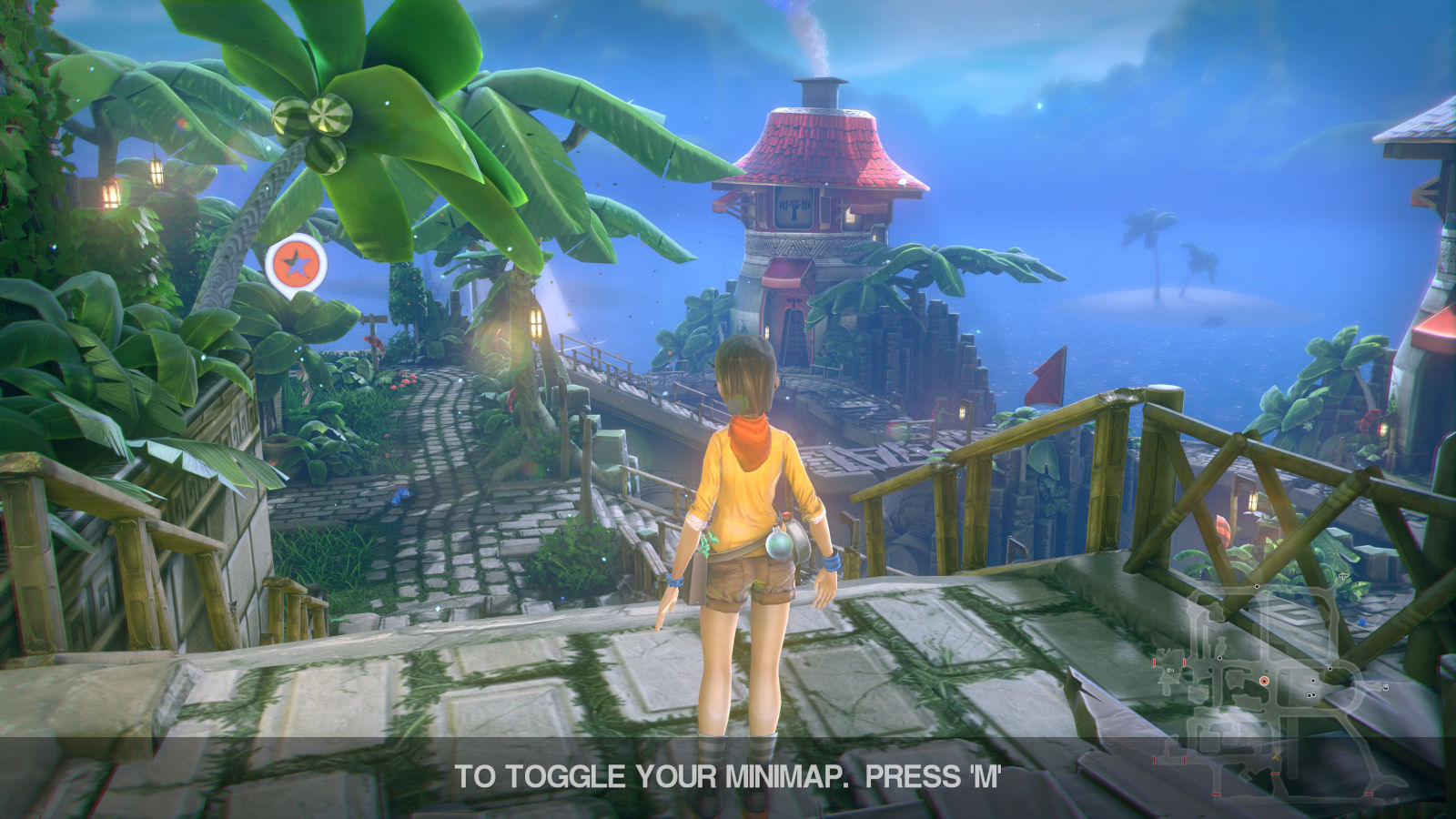 I was in control of a girl with glasses in third person, running around in four areas collecting flowers, kicking vases or chests for coins, unlocking doors with keys bought with flowers, and solving quests. There was also a shop for better equipment and even simple level-up stats. Sometimes a mailman flew down from above and offered a letter for me to read – usually from her dad.

END_OF_DOCUMENT_TOKEN_TO_BE_REPLACED

Late to the party as I pretty much always am these days, I was pleasantly surprised by the “oldskoolness” of this FPS from 2014. It didn’t have the modern nuisances such as only carrying two weapons at a time and no HUD. It leaned more towards the style of yesteryear regarding those things, and I liked that a lot. 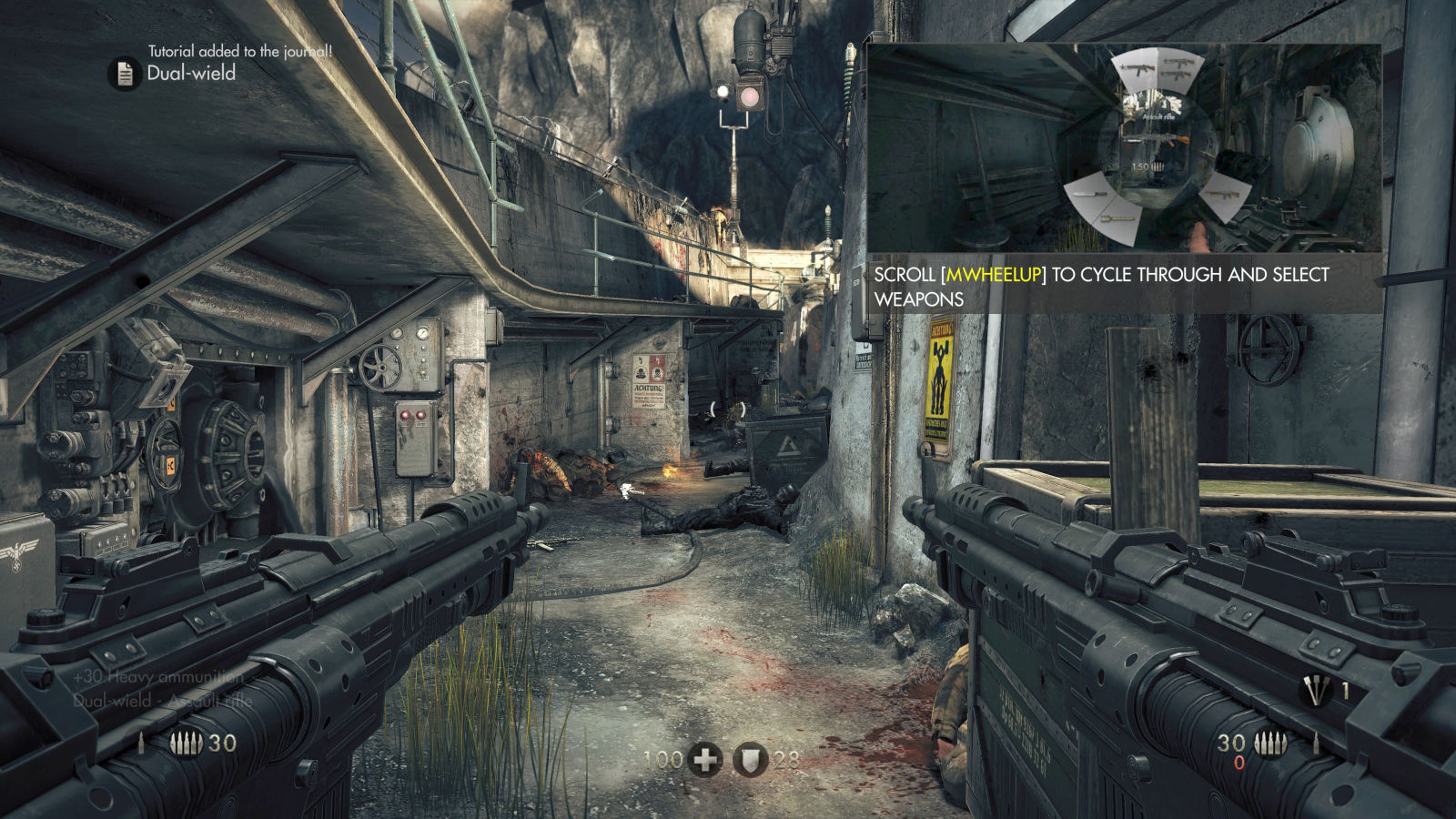 There was a prologue in 1946 that lasted more than an hour. Hardcore action hero Blazkowicz was on a war plane dashing for objectives such as putting out fires, dumping cargo, turret shooting, even jumping to another plane in mid-flight. Soon I was on foot dual-wielding rifles against Nazis, mostly on my own but sometimes in a group – like rope climbing a wall with Nazis shooting out of windows.

I never saw a timed task or a dependency, and the Nazis were easy to kill – so far so good.

END_OF_DOCUMENT_TOKEN_TO_BE_REPLACED

This was a cute puzzle platform game with a small Eskimo girl and a white fox. It sometimes felt like it was inspired by both ICO and Limbo. It could be played either as a true co-operation game, or single player by alternating the two characters. The latter worked well enough on its own. 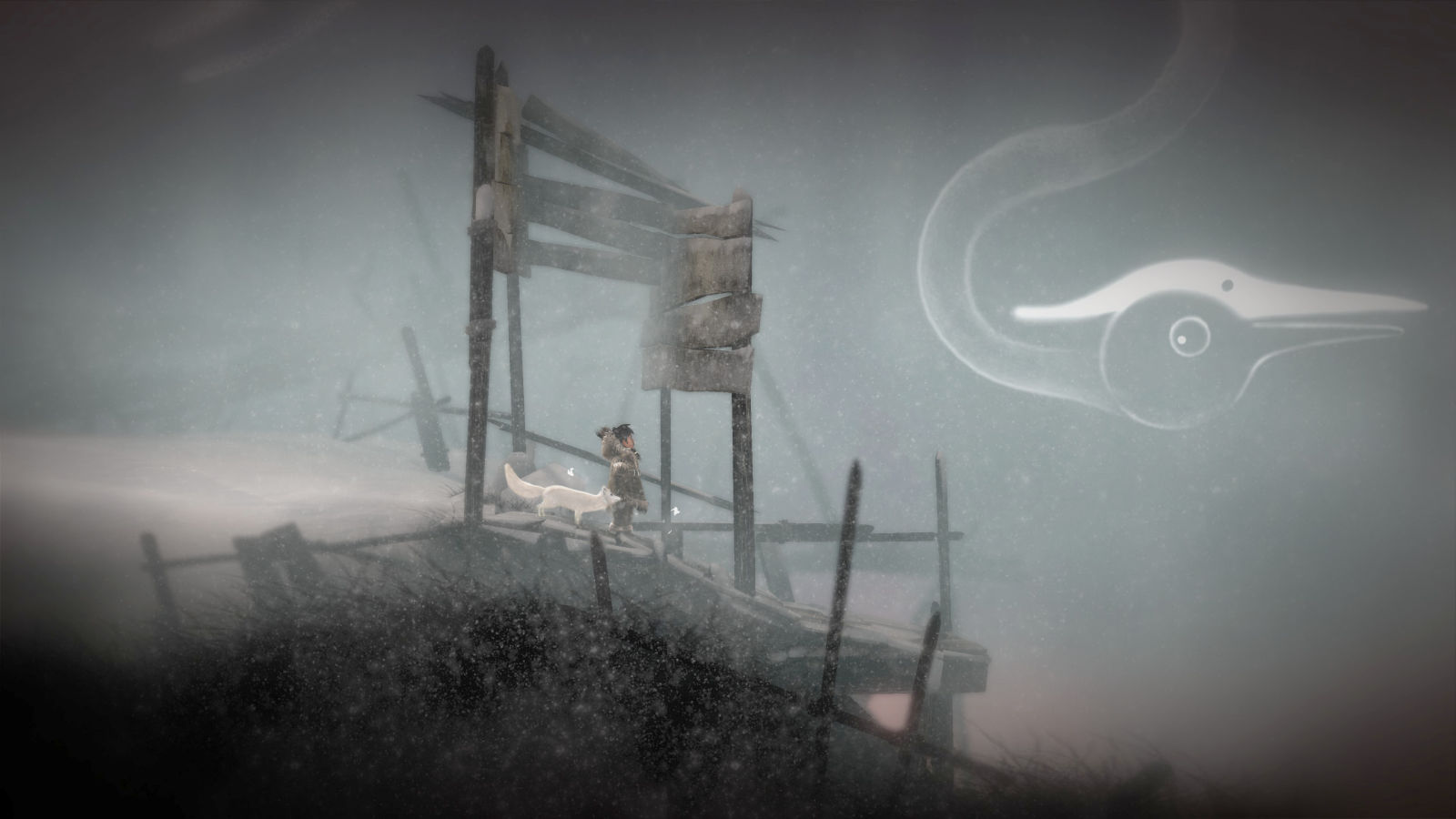 The game itself was a side-scrolling puzzle platform in very convincing icy landscapes with a cold blizzard sometimes delivering gusts of wind that made it necessary to crouch down. Jumping and climbing was very easy for a while, in fact so much that it felt like it almost belonged in the facile adventure genre.

Without spoiling too much, I was fleeing an ice bear on several occasions, a bad guy throwing fireballs, there were cooperation puzzles, even swimming through tunnels. The girl soon got hold of a bola to throw at targets – like ice to break it down or fragile wooden boards – which was also the only use of the mouse to aim her arm in the direction she wanted to hit. Everything else were keys only.

This game was a mixed bag. It had a lot of clichés and was really too repetitive, but it was also pretty and atmospheric. It had enough of the latter to see my through to the end – about 3½ hours later.

It was a horror adventure that took place in a dark and of course haunted mansion. There were enough opening doors to mock it as being a door opening simulator, and it was also not very original. It reminded me of other horror adventures such as e.g. Outlast and even used the popular interactive gimmick of dragging the mouse to open doors and drawers. 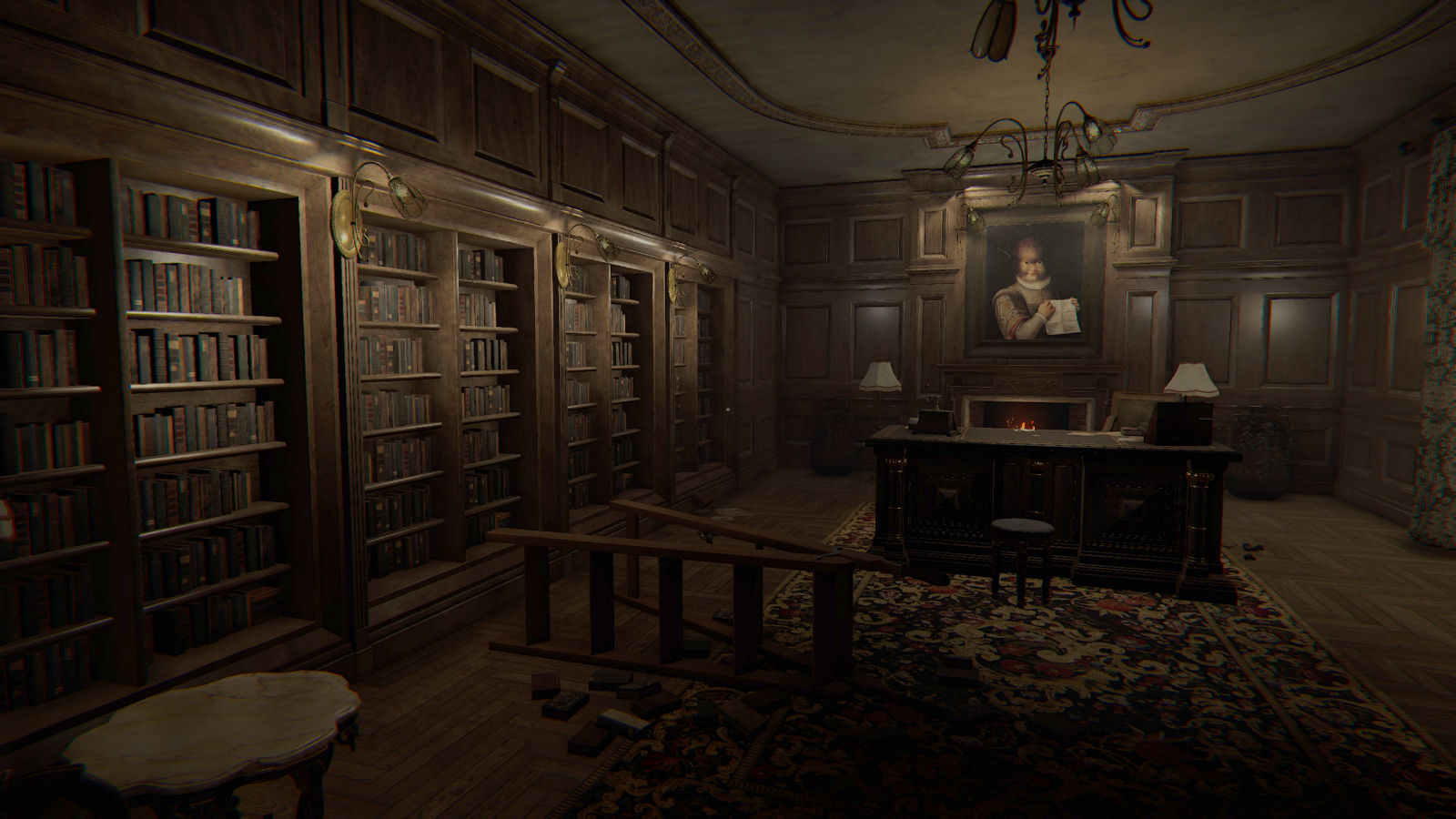 It was quite linear and frequently used the trick of changing the rooms and hallways. There were too many jump scares and ghostly transformations, while actual puzzles were easy and far apart. This, together with the linear nature of the game with no real dying, made it feel like a haunted funfair attraction.

And it had an abundance of almost pitch black rooms.

What I did like about it was the idea of having to find six objects, each time returning to a small atelier to continue a painting with this object. The protagonist, which was a man barely visible in blurry mirrors, had a limp and walked to the rhythm of a heartbeat. After a stretch of uninspired hallways I also found a set piece in the office that suddenly turned into a vertical challenge hunting down ringing telephones.

This part even gave me vertigo – it was unexpected and made it worth persevering.

END_OF_DOCUMENT_TOKEN_TO_BE_REPLACED

That was a really cool game. Sure, it was pretty short – I completed it in about 2½ hours – but it was also very atmospheric and often fascinating. And to think I’ve postponed playing it for the longest time because I heard rumors about having to deal with a psychopathic computer AI. It made it sound like an excruciating experience. Like masochism – or sadism – however which way you want to look at it. 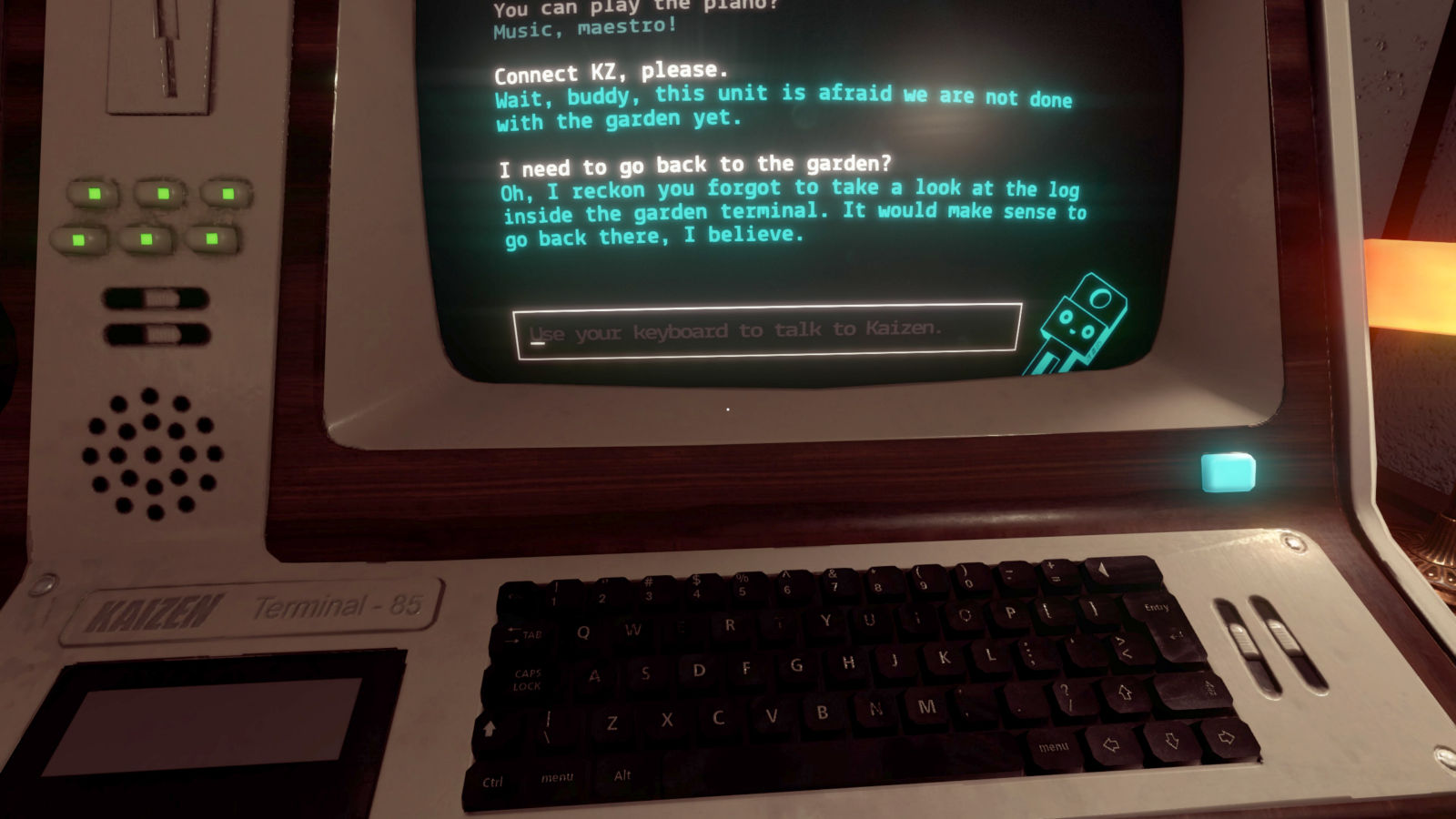 Instead it was a sweet first person adventure where I sometimes had to talk to the computer AI, Kaizen-85, using oldskool terminals, in order to make it open doors, show logs, or move an elevator for me. It could get a little stubborn a few times, but it was friendly and usually approved of my request. That being said, I did decide to roleplay a very friendly and forthcoming attitude. Lots of asking using the magic word.