I finally dinged level 30 in Scarwood Reach, which is the zone following Scarlet Gorge. It seems I’ve fallen behind quests, as I’ve had to do a number of orange quests. I’m not sure what I’ve done wrong. There was a small batch of quests in Gloamwood which I skipped, but I went back and did them to make up for it. This did turn the quests yellow, but after a batch or two more, the quests were orange once again.

Orange quests, and thus orange enemies (i.e. 3-4 levels higher) is a big problem in Rift, at least for my Cleric even with heavy emphasis on the Inquisitor soul. Enemies up to yellow are easy enough to kill, but orange enemies resist a lot, take forever to kill, and hit hard. I met orange solo mobs in Scarwood Reach that could get me down to about 20% health before I managed to kill them.

That’s just not fun for a casual player like me, so I’ve decided that I need to go back and grind some footholds and invasions, maybe even try some dungeons. As mentioned in the previous post, rifts are mostly empty after Silverwood on my shard with its medium population. I was hoping it would catch up after Gloamwood, but it hasn’t been much better in Scarlet Gorge nor in Scarwood Reach.

Am I too fast and the public haven’t caught up? I don’t really think so. A lot of players in my guild are much higher level, and besides, I’ve actually not played all that intensively. An hour or two per day, perhaps. My guess is that people are concentrated on questing and dungeons while keeping rifts in the back of their mind as something they can always do later.

Regarding the old hackneyed argument about being two-shot off the mount and enemies becoming extra strong when fled from; I’m actually not all that annoyed about that anymore because I think the problem lies elsewhere. Some quest areas in the zones simply have too many enemies scattered all over the place. Often it feels like about two thirds would have been better, with a slightly bigger distance between enemies. Also, there are too many enemies close by the roads.

Why is this a problem? Well, consider this. In World of Warcraft and EverQuest II, you can often avoid the enemies as long as you plan your route and zigzag between them. This was a problem in Lord of the Rings Online in the early days because of the enormous aggro radius of the enemies, but luckily the developers saw the light and tuned it down (in my opinion it was much needed). Of course, if you just beeline through enemy areas you are going to get pummeled and maybe eventually dismounted, and that’s really as it should be. But if you are the cautious type and zigzag carefully while riding through such an area, I believe that should be possible.

However, this is often not possible in Rift at all. In many areas the enemies are so close together that even if I really try to zigzag as mentioned, I will still get one, two, three of them on my tail. It’s not always the case, of course – there are areas with less density of enemies – but in my opinion, there are still too many areas where you just can’t avoid having to fight your way out. Maybe I’m a lazy sod wanting things to be easy for me, but that really bothers me.

Other than that, Scarlet Gorge was a relief after the bleak Gloamwood. It has this western look with steep cliffs and elevators on the side. I was a little surprised it didn’t have more Guardian quests than it did, though. Before I knew it I ran out and got a breadcrumb for Scarwood Reach. I then took the opportunity to explore the bottom half of the zone. Turned out that it was Defiant property. 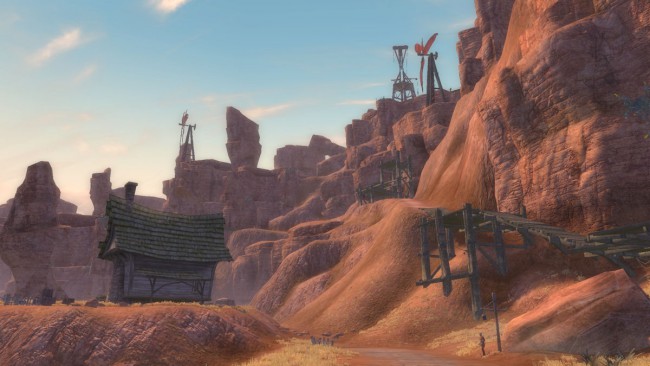 A lot of roads high up on the cliff sides of this bottom half only had non-aggressive enemies, which was a really nice break finding artifacts and crafting nodes without having to plan how to avoid the next set of bloodthirsty critters. Later I was on another set of roads with Defiant guards on them.

One of them got on my tail and I quickly noticed that him hitting me didn’t automatically flag me for PvP. I seem to remember that was different in World of Warcraft. Maybe the auto PvP flag off option made sure I wasn’t flagged now. When I returned later (getting back on track) I decided to kick his ass, and not too surprisingly that did flag me for PvP.

One thing I really liked in Scarlet Gorge was the introduction of the “Activate Ancient Wardstone” ability. The way this works is that you find an inactive Ancient Wardstone somewhere in the field. You then use the ability on this Wardstone to activate it. Immediately after a quest NPC runs in, plants a banner and raises a tent, and then offers a quest. It felt like creating your own personal quest camp, which was really cool. The first camp I “created” like that had a quest where I had to perform a typical deed, and when I delivered the quest, the NPC said that he now wanted to make the camp more permanent. After a few seconds the tent was bigger and the camp more solid.

The idea with these Wardstone camps that you can create yourself is unique and marvelous, but I can’t help but think that it needs to be clearer to the player. The first quest NPC that gave me the ability didn’t really explain it well enough, and we had quite a few questions in guild chat from other players that was wondering what this ability was all about.

If you do get to Scarlet Gorge and stumble upon these Wardstone quest camps, make sure you find a traveling merchant named Bahlmus of Shimmersand. He offered a series of quests that was longer and more intricate than the usual stuff. After getting some things for him, I had to escort him up a set of natural stairs towards a cliff side. Spiders spawned about three at a time, but before long they completely swarmed us like they were coming out of a cornucopia. Bahlmus then gave me access to an explosive AoE ability. I failed the first time because I thought it only worked once, but it turned out that it could be spammed pretty quickly. Make sure you put it on a temporary action bar slot so you can use it often. You’re going to need it.

On the small wooden bridge walkways high above the ground (I would never have had the courage to walk on these in real life) I made a sad discovery. It turns out that you can’t use a knock-back ability to send an enemy screaming to his death far below. The game simply stops him right at the edge of the walkway, as if he met an invisible wall. It felt really cheap, although perhaps it can’t work any differently in an MMORPG like this.

I’ve only done about a quarter of so (maybe more) of this zone, but I like the looks of the zone. Lots of tree stumps and even a big “Path of God” walkway. Unfortunately this is also where I started getting orange quests, so I’m going to have to take a break as I go back and grind a bit. 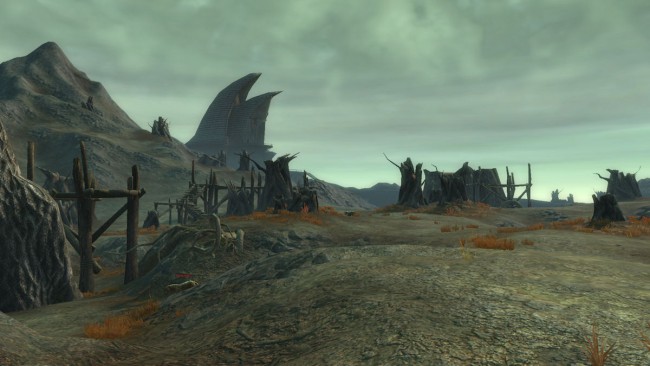 In an earlier blog post I claimed that the game could use a little more humor. Generally that’s still true (especially regarding the quests stories) but at least some of the enemy animations and in particular their death animations sometimes look hilarious. Make sure you check out the death animation of the flapping bird creatures as you arrive in the eastern part of the zone. As they die, they plunge directly into the ground, beak first, and with their claws sticking up in the air. Beautiful.

Another thing that came to my attention for the first time in Scarwood Reach was how invasions try to destroy the Wardstone in the quest camp. As soon as the Wardstone is destroyed, all the quest characters will fade away. Somehow I knew this already from earlier zones, but it hit me how you can prevent it from happening by actually healing and buffing the Wardstone. Too often I found the next camp in a zone with a Wardstone down to 10% of health. I then immediately healed it up to 100% and buffed it with additional endurance. Now, every time I find a new camp in the game, I always buff the Wardstone as well as healing it up, if it needs it.