During my time on Steam, I’ve received the odd game here and there that didn’t necessarily align with my own taste in genres. It may have been free games, games given to me by a friend that had several keys of the same game to give away, or games that for other reasons just kind of popped up in e.g. my Steam library without me knowing how they ever got there in the first place.

Instead of just discarding these game straight away, I thought I might at least play them for about half an hour or so, now that I have them anyway. Who knows, maybe one of them would turn out to be a surprise that I would actually want to finish.

This will be the first in a series of blog posts.

The Adventures of Shuggy

The first was an oldskool 2D platform game with a Dracula-style sprite clearing levels in castle rooms. Most of the rooms were static (i.e. did not scroll) and reached from big hub halls that did scroll a little bit. Doors here were unlocked as rooms were cleared which also obtained a key from each. Collecting enough keys made it possible to open larger doors to other dungeon hubs halls.

The sprite could be controlled with keys for direction, jump, and an action key that changed depending on the rules of the room. Death meant the room was reset but there were sort of unlimited lives.

Controlling him with the keyboard was not cool. A gamepad would have worked much better.

I was surprised by the variety of rules for each room. The general goal was to obtain all the green gems, but everything else was arbitrary. Some rooms could be rotated depending on which way I was facing. Others had energy fields that were removed when stepping on buttons. In one room there were three versions of me that I could swap between. To spice things up, they were rotated differently from each other. 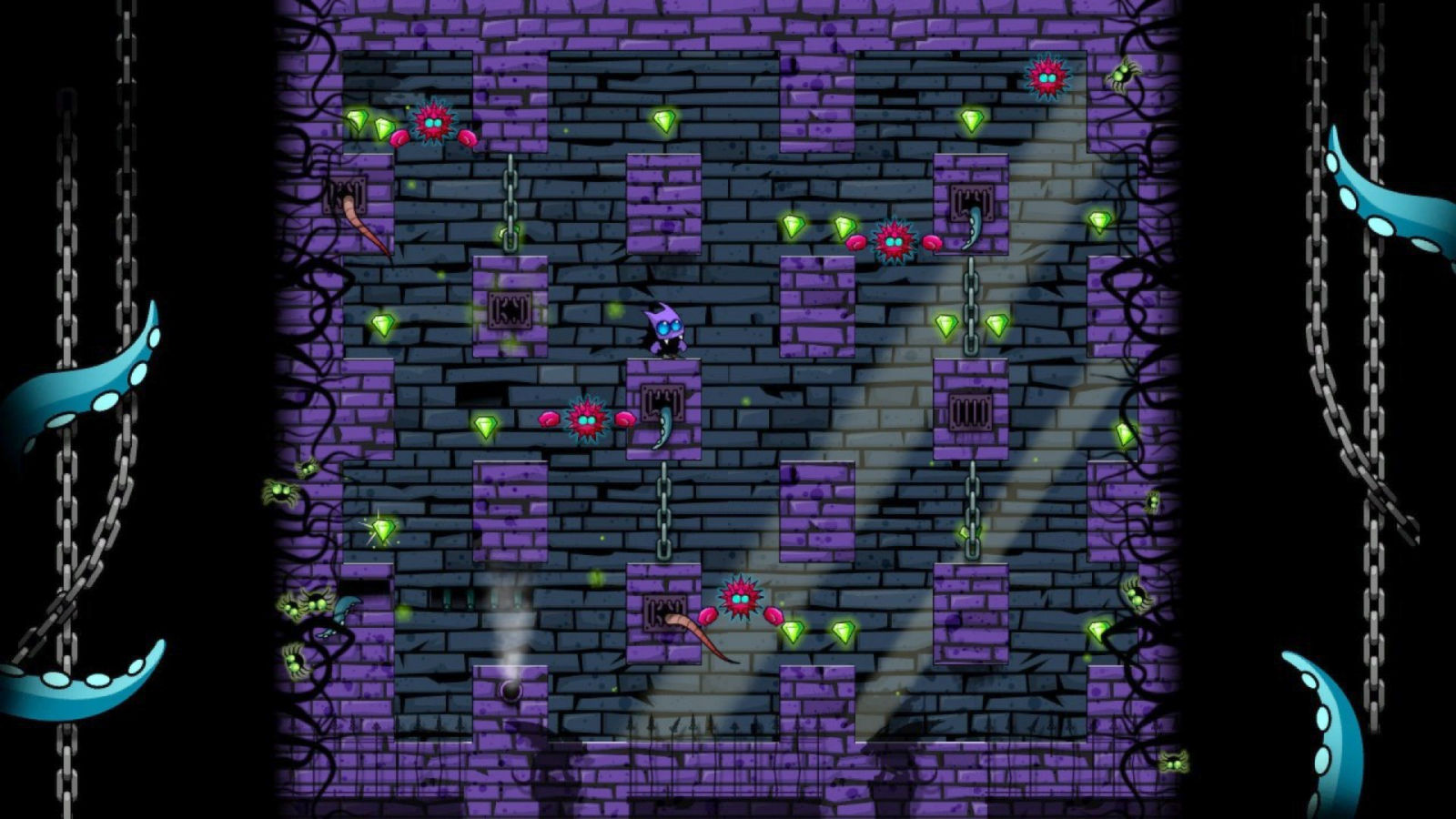 Probably the most fun room I found in the short time I tried the game was a “Lemmings”-style room where small orange walking dots could be scared onto other platforms. The goal there was to make them spring into small cages containing green gems, thereby releasing those for me to pick up.

The most difficult versions were those where a timer went down, eventually spawning an earlier version of myself tracking the same route as sort of a ghost. Touching this ghostly self was fatal, and the timer reset for more to come. Especially that type of room reminded me of the platform puzzle game Braid. 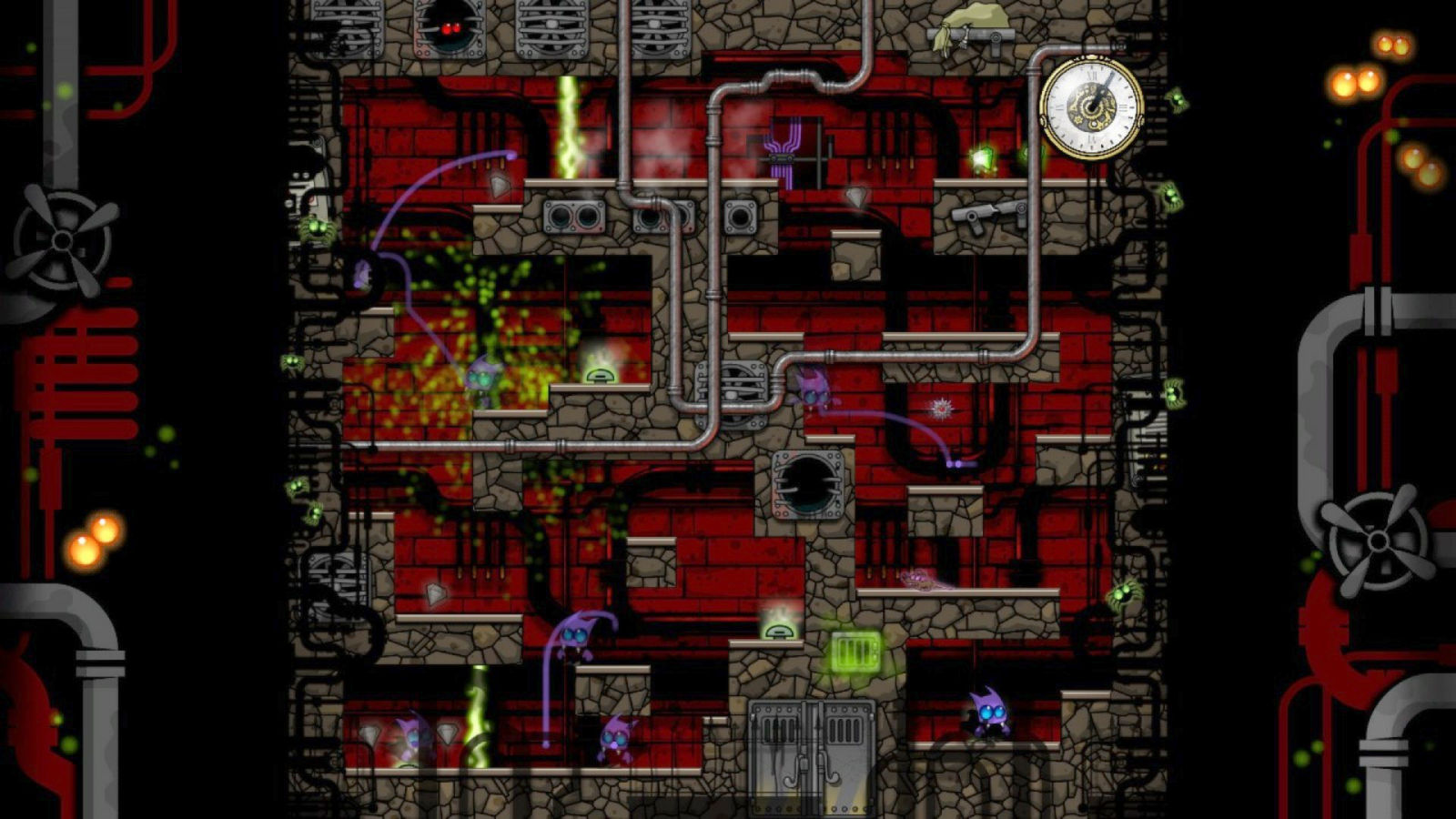 I could feel it was getting a bit more challenging as I cleared rooms and especially the room with the ghostly doppelgangers annoyed me, so I was happy to move on after half an hour.

I’ve never been into this series because of its focus on online multiplayer warfare. Absolutely not me. I think Battlefield 3 was one of those I procured when it was offered for free in EA’s Origin, but don’t quote me on that. Anyway, it included a single-player campaign so I decided to check this out.

EA tried their best being straight on annoying as I tried to start the game. My Origin had not been started in years and had to auto-update, but this failed. After a few progress bars it claimed my version of Windows was wrong. I had to uninstall and then install Origin from scratch before it started up properly. And then starting the game by double-clicking the desktop icon opened a web site in my browser. WTF?

I don’t care what, when, where and why, this is not a cool way to start a game.

After logging into the web site, clicking the button for playing the campaign told me that some plugin was wrong and I had to try again without it. Then finally the game started. It behaved liked a normal PC game from then on. Logos, intro, and a 4K resolution using the Frostbite 2 engine. Good.

Starting the single-player campaign offered me the usual three difficulty levels. I chose the easiest one, as always doubting that the game would respect it. These kind of games never do.

I was immediately thrown into an intense terror action sequence onboard a brisk train. I picked up a gun and shot a few terrorists. Got a rifle. Smashed a window and climbed to the roof and shot more terrorists. Sometimes there was a QTE. This frenzied intro wasn’t that difficult actually, but it was abruptly cut short by being knocked down by the main bad guy, and then came the rewinding of the clock.

Next level took place in a city together with a small team of soldiers. It immediately reminded me of Black Hawk Down. After running to a parking lot, all hell broke lose. First, a sniper. Then a regular beehive of terrorists started shooting from behind cars. One car exploded. Screaming and shouting.

I really tried staying secure behind cover, occasionally getting up to pop an enemy or two. Within the same minute or so, I died twice within about three seconds. Remember, this was on the easiest difficulty level. I will never understand why FPS developers never respect this setting.

But on the other hand – thanks EA, for making it easy for me to leave this game.

This retro platform game was quickly left behind. It was clearly designed for children and way too cute and simple for my taste. Sometimes there were even helpful direction arrows since it obviously wasn’t easy enough. It also had a strong stench of mobile port, with enormous easy-to-hit buttons.

It was actually kind of a strange twist coming from a rock hard FPS to this walk in the park. 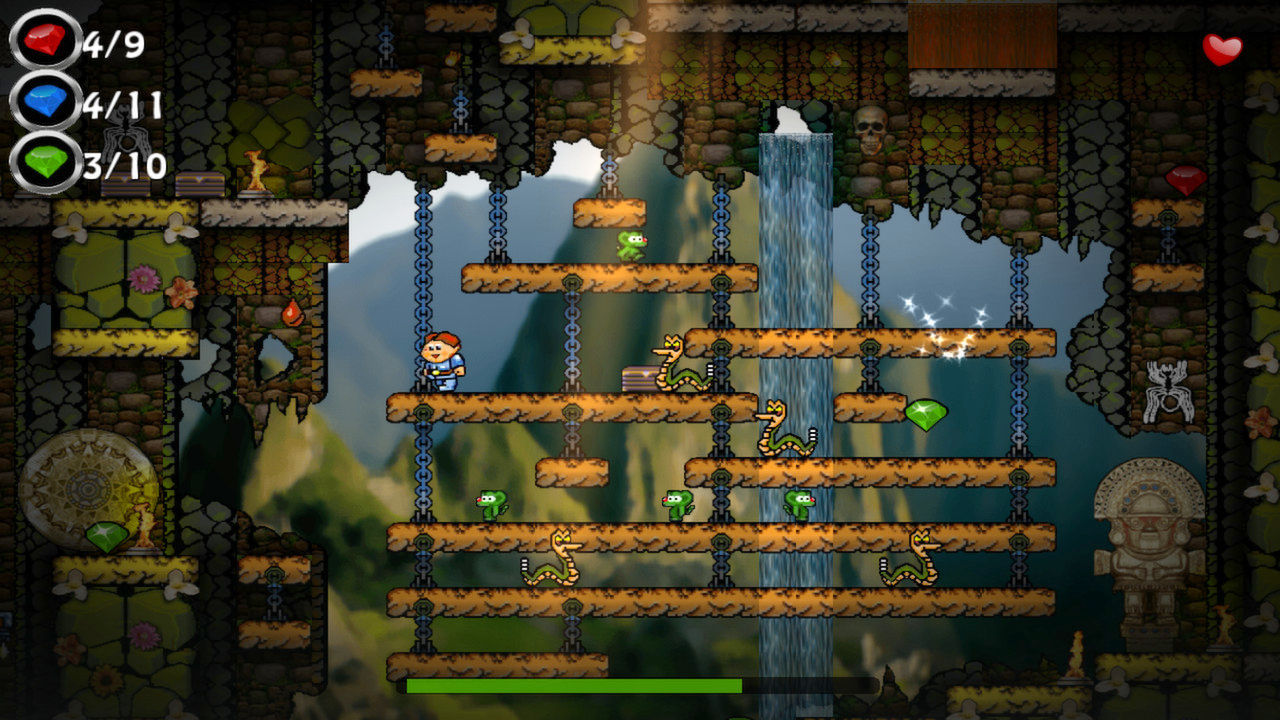 According to the developer, there were 50 scrolling 2D platform levels. All I needed to do was collect gems or coins, optionally jumping on creatures to stun them. Collecting everything opened an exit portal.

Jumping on the snake killed it with a small fart sound. I liked that.

This was actually pretty damn fun. I was driving recklessly through the streets of Paradise City with pop hits playing in the radio, cutting corners to try out new routes on the way. The open world city was like the 3D Grand Theft Auto games, only without people on the sidewalks and with less cars in my way.

Racing games are normally not my thing, but I had a silly grin on my face the whole time.

I drove through auto-repair shops, gas stations for a refuel, even a paint job. They did the job in a quantum second as I drove through illegally fast. I could smash through road blocks and perform jumps through billboards. There were also super jumps across industrial canyons. 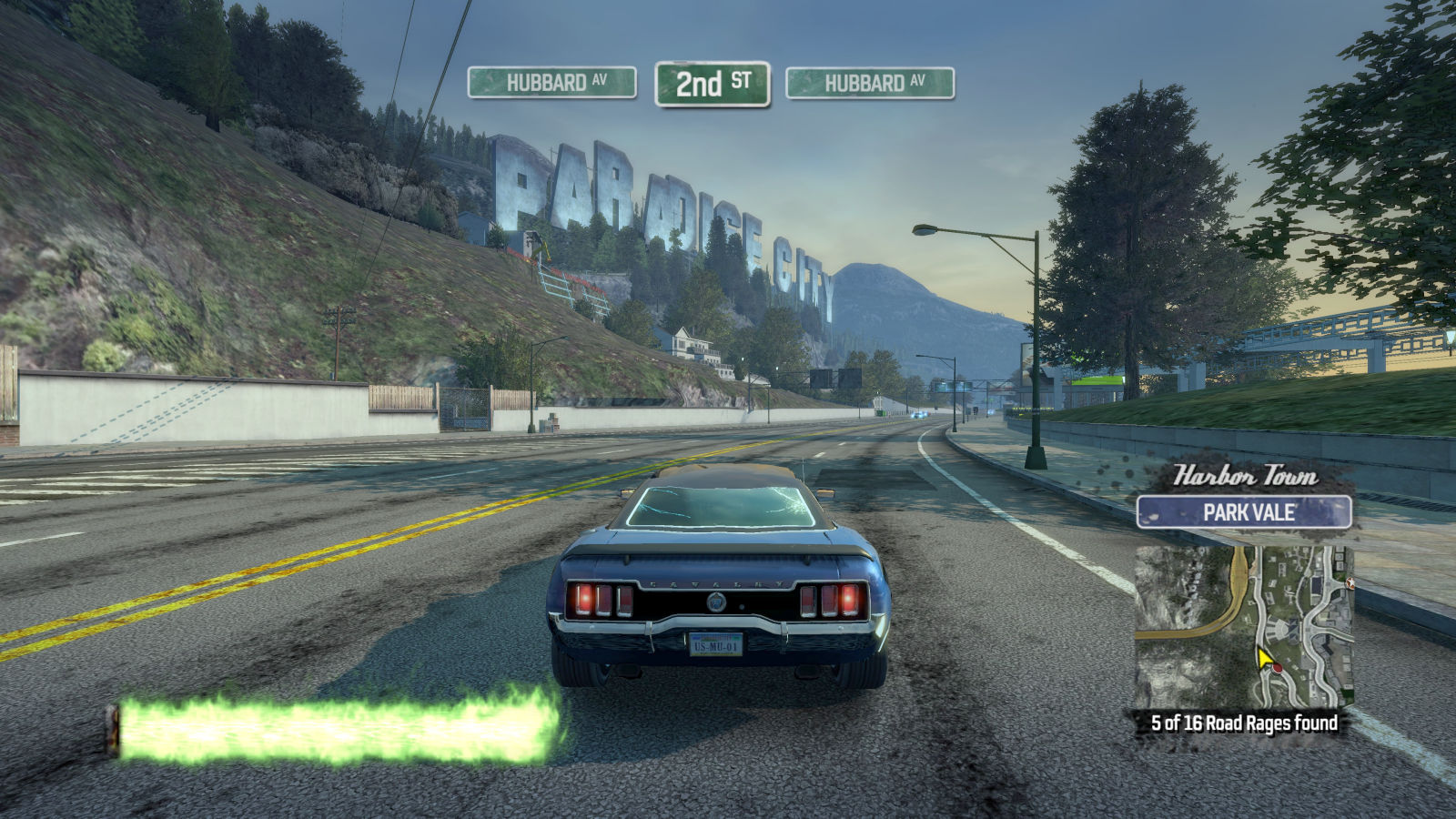 It was well designed. The city had tons of detail and there was a male voice with tips, explaining new things as I found them, like doing the jumps through billboards. The steering with the cursor keys and two more for accelerating forwards or backwards felt well balanced.

I imagine this game is great fun in multiplayer, but sadly this didn’t work with Steam. Someone mentioned in a user review that EA have since moved to Origin servers. Why am I not surprised?

The last game was a top-down 2D driving simulator for parking a car. I first thought this would be a silly and somewhat offensive game, but it was actually okay. I could flip the gear forwards or backwards, drag the steering wheel for tweaking the direction, and it had good sound effects and comfortable music.

Why was this game not on Steam anymore?

The parking lot in each level had one, two or three star booths. More steering and tweaking was involved to get the higher star ratings. Touching small posts or cement areas was fatal and restarted the level.

But to me, it was more relaxing than rage inducing. Then again I only tried four parking lots.