This was a mix of a simulation and a puzzle game as an immigration officer at a border checkpoint for the fictitious country of Arstotzka in 1982. Inspecting the passports and papers of the arrivals from a massive queue was split up in days. In between a family had to be supported with the income, and if I had too many validation errors then maybe they would starve, be cold, or even die.

On various new days there were a change of rules, possibly introducing a new tool. Sometimes it was just additional papers, at other times confiscating passports, detaining, searching for hidden weapons after a couple of snapshots, even using a key to open a locker with a weapon and shooting a runner.

I didn’t expect this one to grab me as much as it did. Normally I’m not always keen on these simulation kind of games, and I had prepared myself for one of those that I played for one hour (the unwritten backlog rule) and then abandoned. I even selected easy mode with an additional income to avoid having to break too much of a sweat supporting my family. But within just a few minutes I was really hooked.

One reason was the terrific atmosphere – the dark, dystopian scenario, with perfect muffled talk sounds. Another reason was that checking up on details in passports, papers and fingerprints spoke to my tad of a perfectionist gene that I made good use of in my 12 years as a software tester. Not that I didn’t get quite a few error receipts. Sometimes the game did feel a bit unfair as if it wanted me to be downright wrong about a decision no matter what I chose. But that feeling of nailing a wrong piece of information and maybe even detaining someone, it was mysteriously fascinating.

I liked the bombastic MOD style piece of music on the title screen, complete with a logo jogging to its rhythm. There was also a nice piece when completing the game (even though I got a sad ending).

If I have to put my finger on something and frown, it has to be the slightly steep learning curve. I actually played a while in the beginning, failing a few control sessions that I didn’t quite understand why, until I started using the rule book more thoroughly to keep track of the various types of passports. It also helped when I discovered that the audio log could be parked back into its tray instead of taking up space. 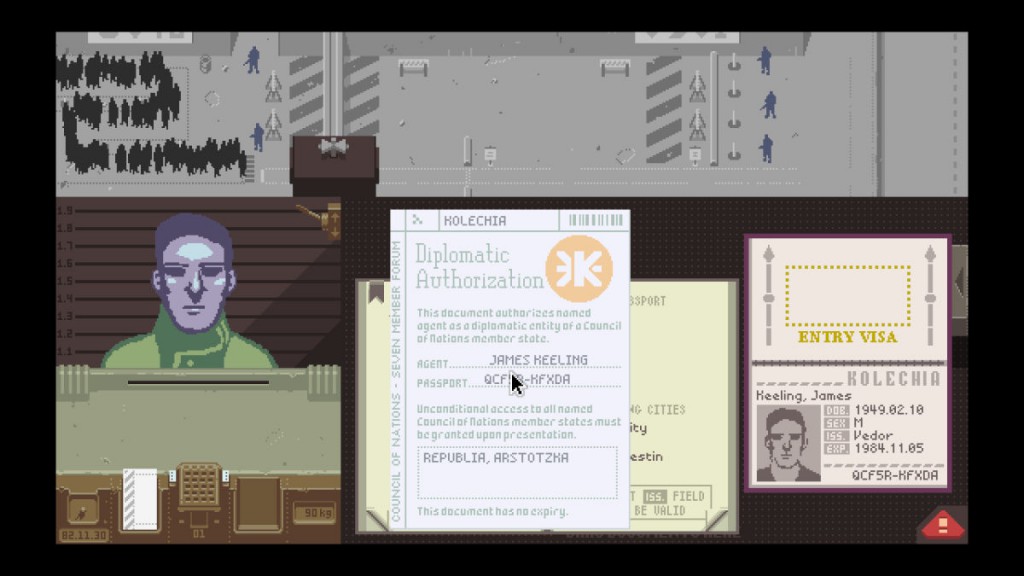 Also some of the new stuff added at various days had me wondering if I could figure out the new rules, but I got used to how the game mechanics worked and what to expect of the gameplay. And then it was just all down to meticulous attention and double-checking everything. That said, one thing I don’t think I ever got hold of was forged passports. Sometimes I got an error receipt about it and was confuzzled.

Booth upgrades was just earning hotkeys instead of clicking the mouse? Certainly a unique reward. I’m not sure I’ve seen anything remotely like this before. I bought the upgrades offered, but only because I was playing on easy mode and had the money. Otherwise it would have been an unnecessary waste.

I couldn’t stop grinning at the overweight women arriving with dilated chins and a description in the papers that agreed with me, yet the same ID also mentioned that she weighed approximately 60-70 kg. That’s being overweight!? Maybe this game takes place in a dome city on Mars.

Apart from the more or less random arrivals to check up on, there were a few scripted encounters as part of the story. Some were visits by a secret organization with folded black letters and a plea to support their cause by doing something shady. There were also visits by guards, thankful for detaining many arrivals or for shooting terrorists, and there were visits by my superior.

There was a lovingly old fool returning multiple times. In the beginning he had a drawn passport and I had to refuse him several times as he got better at forging the papers. Finally his papers looked good to me and I accepted him, for which I got a coin and a Steam achievement. Later he returned again, this time smuggling stuff that I for some reason never caught up on. Sneaky fellow. But he also tried to save my hide when the ground started burning under my own feet. He gave me his own passport and offered information about whom to contact in order to forge new ones. 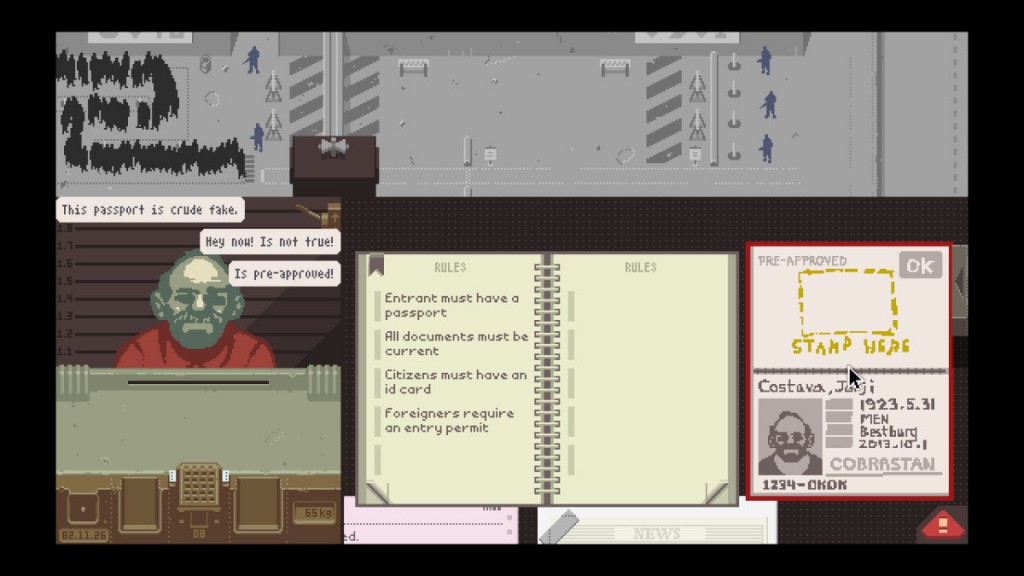 After the old geezer trying to help me, the day ended and I got the usual list of bills to pay. My wife found a photo for the false passport, and then I actually had the option to flee the country all by myself. I don’t think I have ever been so sure of not using an option in a game before. Leaving my poor family behind like this, I could never do that – not even in a pixelated game like this.

Besides, I still had about two days left before an inquisition came up. I had time. Or so I thought.

The very next day, a superior came by again. It started well. He said something in the line of maybe I wasn’t doing such a bad job after all – then he turned around and saw the pictures I had put up on the wall. Once before he had asked me to remove this. Second time was regarded as violating direct orders, and I was immediately sent to prison. Ending number 11 out of 20.

Being sent to prison for having a few pictures on your wall. How about that.