After some random exploration, various side quests and most of the quest line for the Minutemen, I have finally decided that I’ve seen what I want to see of the vanilla version of Fallout 4. Maybe I’ll be back for some DLC later. I got to level 55, with 264 locations discovered and 108 quests completed. I maximized hacking and lockpicking relatively early and kept to mostly using single shot rifles, sometimes assisted by an automatic rifle with explosive bullets whenever I had ammunition for it.

The game generally had a bit too much street fighting for my liking. There were hardly any place I could go in the world where a gun fight wasn’t taking place somewhere in the distance. It often sounded like New Year’s Eve. Brotherhood of Steel was also quite aggressive and often had a Vertibird or two flying around. Hey, we have a skirmish over here, come on over and help us out! Sometimes it spiced up the action and was fun to take part of, but as said before, I still think they overdid it. There were situations where I just wanted to do a quest and was constantly pestered with skirmishes on the way.

By the way, I have a weird tip for you in case you’re bored watching loading screens. You can rotate the model by holding down the left mouse button and then move the mouse around. You can also toggle the green soda filter by hitting the V.A.T.S. button. I wonder if there’s more that can be controlled like this on the loading screen? It’s important.

Some more stray observations after a total of 88 hours and 50 minutes.

There was a period of time after having acquired the X-01 power armor where I had trouble obtaining aluminum because of both repairing it and also wanting to upgrade it fully. Slightly annoying. But as soon as it was upgraded completely, I started naturally accumulating aluminum again. I also had some weapon modding going on at the same time, all of which meant that I actually bought some of the shipment stuff at the merchants. I didn’t think I had to since I had been observant and always picked up the right junk. I guess the need just piled up all of a sudden. 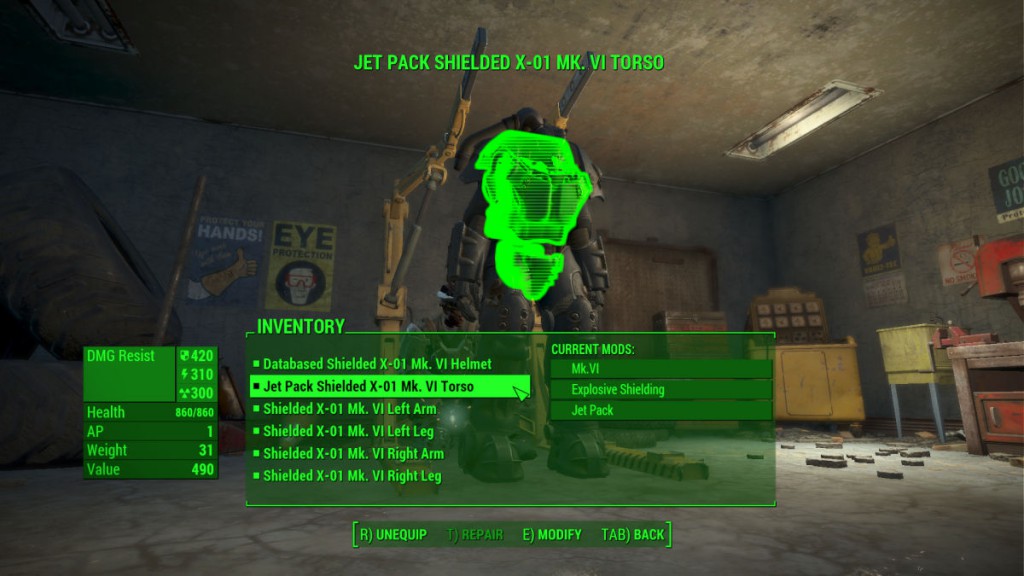 While upgrading my X-01 power armor I also added the jet pack. Using it was slightly weird – a tap on the jump button to, well, jump, then press and hold the button again to actually fly upwards. At first I was very disappointed that the fly distance was tied to the action points. It meant that you could barely fly up on the roof of a low building and that was it. It also used up a hell of a lot of fusion juice. But after a while it made a lot of sense and I understand why they did this. Flying up on top of towers would have been way too overpowered, and using it to bypass fences and enter holes was still quite useful.

I know I have this thing with invisible walls in video games and often complain about them, but honestly, why add them to the perimeter of the open world area when you can just add some impassable rubble, fences and mountains? But maybe it takes more time to do properly and was on a low priority?

I also wasn’t too keen of the way many buildings were reset after visiting them once. I had entered buildings where I had picked all locks and hacked all computers, yet upon returning much later, everything was locked and protected all over from scratch again. You could perhaps argue about raiders returning and locking it all up, but I would still have preferred it to have been left as it was. 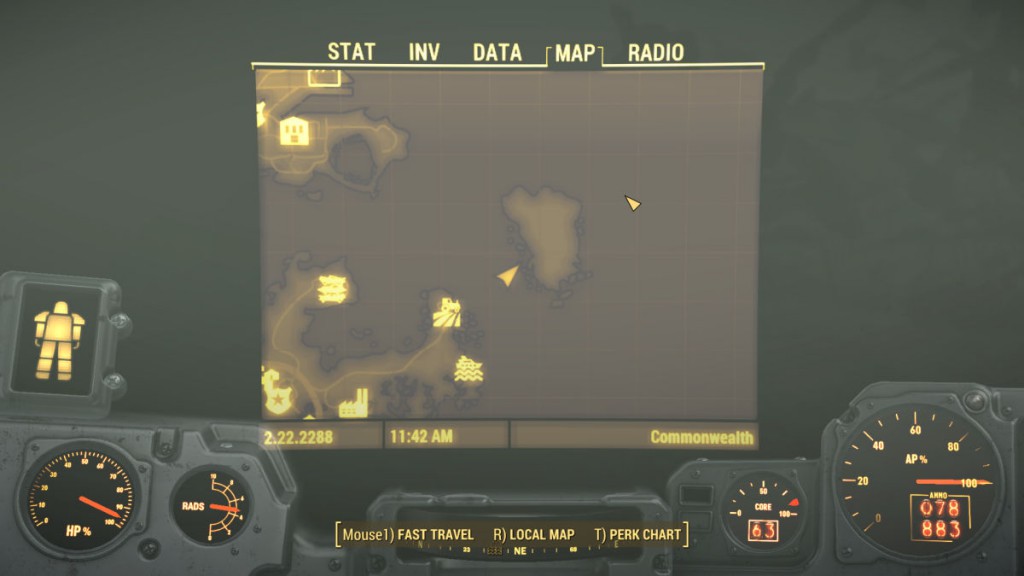 There was a remote island called Spectacle Island to the south east where I had to walk on the bottom of the sea in my power armor to reach it. I love small, remote islands like this in RPG, always have. It’s sort of a miniature open world all by itself. A few buildings, enemies, a stranded container ship, even a radio tower and some good loot. I wish there had been more islands like it.

I started using Cait a bit after meeting her in the Combat Zone, a place I thought was going to be an arena game but thankfully wasn’t. She was a pit fighter with a strong Irish accent and a drug addiction that she managed to get rid of in her personal quest, strapped to a chair in another dilapidated building originally swarming with enemies. She talked much and wasn’t the worst companion, but I still liked Nick better.

I liked the dig quest with Bobbi, the female ghoul thief with the rusty voice. Yes, in the end I actually turned against her and shot her as we were confronted by Hancock’s lackeys, because I felt that was the right thing to do – and because I wanted to try Hancock as a companion later. But the long trip through underground tunnels was fun. One of her companion thieves had a hovering Eyebot that could zap holes in fragile elements of walls. It added a refreshing exploration element trying to find the next fragile wall. 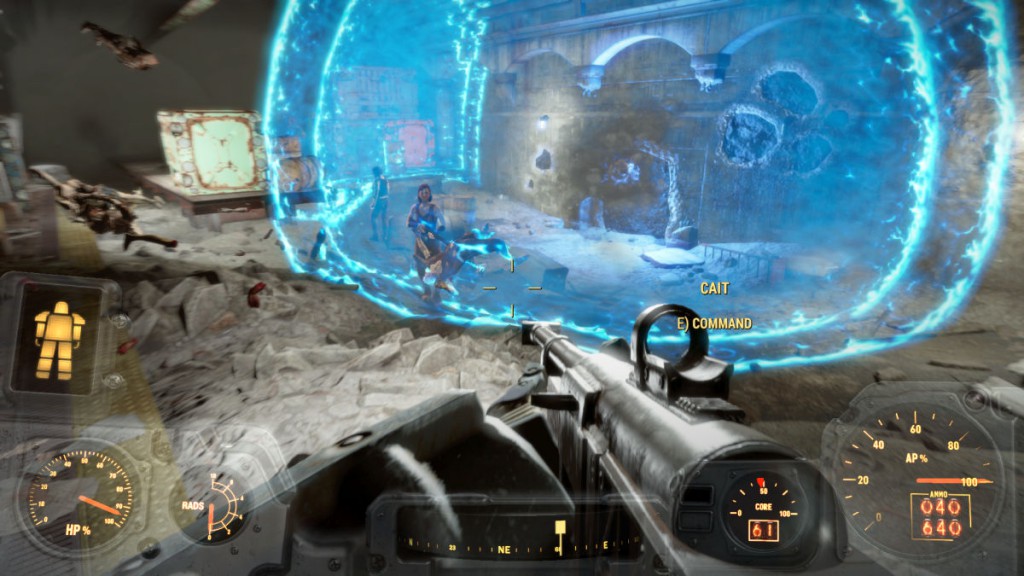 It was also during this underground quest that I had a few very weird confrontations with bullet sponge gangrenous feral ghouls that refused to die. It felt as some sort of glitch and at one point it almost looked liked they healed themselves repeatedly. I haven’t seen this behavior before or after this quest.

I tried out two more companions after Cait. First, a Super Mutant aptly named Strong that I rescued from the top of a tower. He didn’t like much of what my goody two shoes character was doing and it didn’t take long before I ditched him. Fawkes in Fallout 3 was way more interesting.

My final companion was Hancock, the mayor ghoul from Goodneighbour. At one point I gave him a flame thrower and took some nice screenshots of him using it, but other than that he didn’t seem to comment as much on things as some of the other companions I’ve tried. 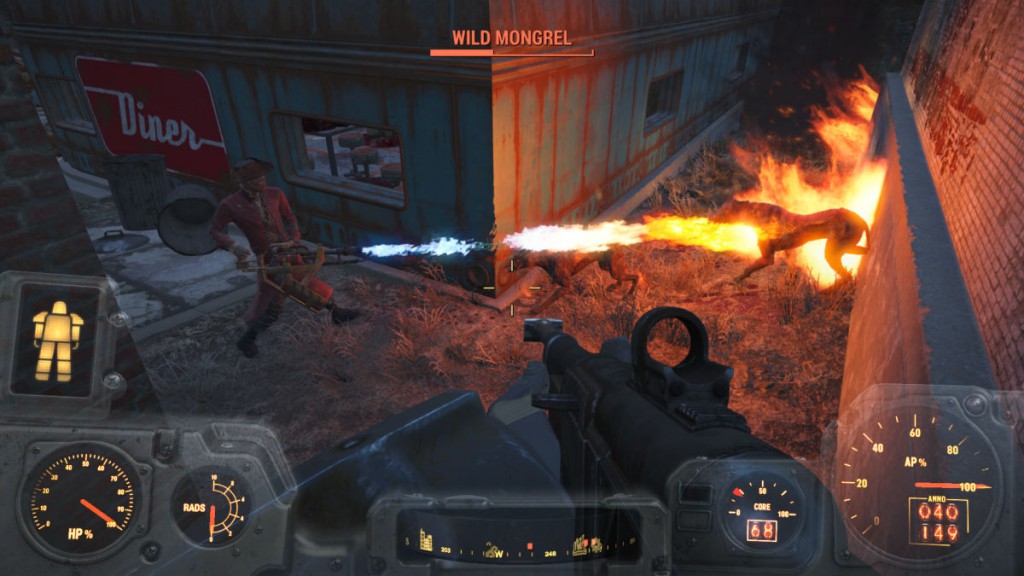 Speaking of Goodneighbour, I met the door salesman from before the war in one of the rooms at the hotel there. He was now a ghoul but of course he was still wearing the same suit. No need to replace that after more than 200 years.

That reminds me, I have to do my laundry one of these days.

While exploring in post-apocalyptic Boston, I also found a beer robot in a cellar of a building – with a quest. I had to escort the robot all the way to the hotel in Goodneighbour. Needless to say it was slow and we were attacked all the time through the arduous streets of the city. Luckily it seemed to be sturdy and didn’t die on me even once. I did manage to piss it off though and had to make amends with a quickload.

A really sad part of my time with Fallout 4 was that I could never experience the line of quests on U.S.S. Constitution myself. It was an old pirate ship with droids and robots acting as such, with the ship itself crashed down on top of a small house in Boston. The captain was one of those dark, tough robots with a pirate hat. I had heard rumors in forums about a really funny end to their line of quests, but for some reason they were all hostile as I approached the ship.

I tried to fix it with a console command. There were commands to align the player faction with another, but for some reason the faction for the U.S.S. Constitution wasn’t there. I even got quite stubborn and wasted too much time using the help search command in the console to see if I could dig up the right ID for them somewhere, but to no avail. I gave up and watched the quest line on YouTube instead. 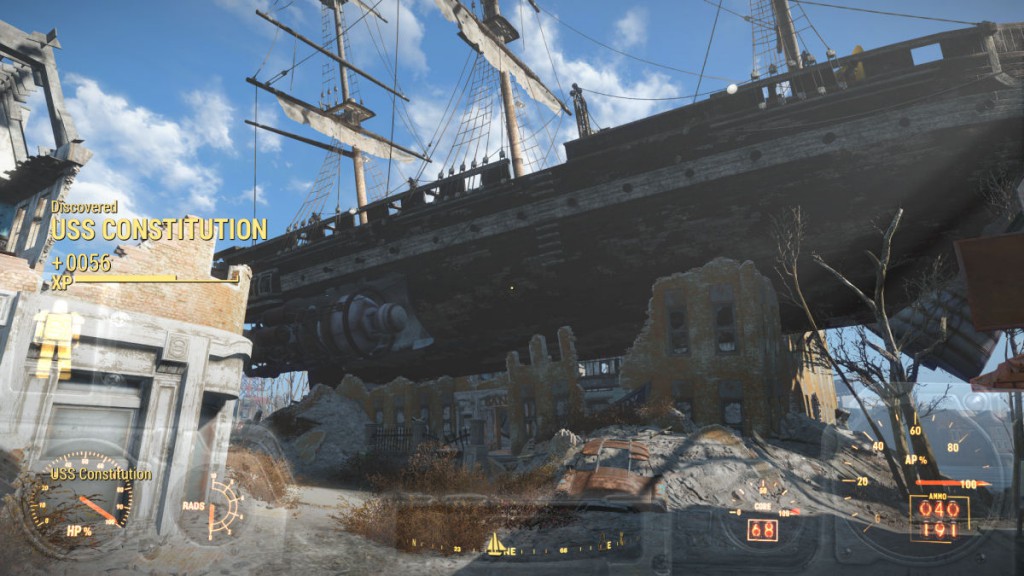 The quest line was long and mostly about repairing the ship and its rocket motors. Sometimes scavengers attacked from the streets, but the ship had a line of cannons that could be fired several times. Some of the components for the ship had to be found in other locations of the world. Finally, the player was sent to a house next to the ship to press a button while listening to the captain on a radio. The ship lifted up and flew steadily onward – right into a taller tower building in Boston, parking on top of it. It was really laugh out loud funny and worth the trouble. The captain muttered something about them now being closer to the sea and thus it still being a success. Talk about a positive attitude!

Now that I think of it, I might have shot at a robot or two on that ship while I was brought to the Prydwen in a Vertibird for the first time. So if you read this and haven’t done that trip yet, don’t fire on a weird pirate ship on top of a house. The robots will go hostile and their quest line will be FUBAR.

Entering the mindset of finalizing the game, I started doing the quests for the Minutemen in Sanctuary Hills. I had postponed this because I feared there would be a lot of settlement crafting quests, but Preston himself didn’t actually offer much in that regard. It was mostly about going to farms and help out killing ghouls and raiders, or finding new spots then merely craft a radio tower and a power supply for it.

And I must agree with the complaints I have read on the internet about this quest line – way too many radiant quests about killing ghouls, raiders, or fix a kidnapping, following by the farmers accepting to be part of the Minutemen. The worst part of this was that the target enemies was just some random spot on the map often several kilometers away. It got old real fast. 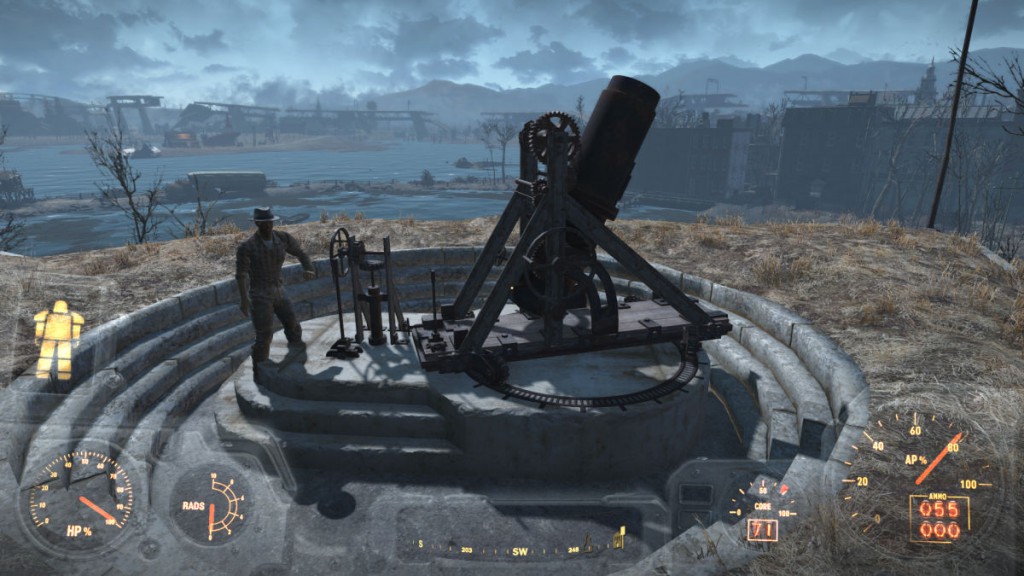 Luckily there was an exception in the form of a castle to become the HQ. First, it had to be cleaned out of Mirelurk monsters and their eggs, an attack that was almost military in its planning. A radio tower had to be fixed, and later a skilled female soldier helped me gain way below to an armory, after which an artillery cannon was built in a corner of the castle. This gave way to ordering attacks in the form of a whistling cannonball from above by simply dropping a signalling smoke grenade.

Generally I had a good time completing it and I don’t mind having dished out top dollar for it. It was an improvement on the previous game in many ways. The combat was better (didn’t use V.A.T.S. much) as was the writing, the speech checks, and the graphics. But it was not much of a true RPG, the dialog wheel could have been better, and I also didn’t think the world was as interesting as in Fallout 3, in spite of the vertical nature of the buildings in Boston. However, it was still a big open world that was fun to explore.