With more than 400 completed games notched into my belt – 50+ alone being CRPG – it’s inevitable that some parts of this particular genre has started feeling worn out. It’s like having heard the same kind of joke thousands of times before. Even with a different wording, you can predict every beat of the joke as it’s being told, and the final twist will leave you numb. Know that feeling? For an old geezer like me, this sensation can come with everything these days. Movies, games, books – you name it.

Luckily CRPG tend to be so detailed and multifaceted that there’s stuff to like and admire, even when they tend to trigger the most tired tropes of all time. Maybe the tropes they’ve reused may even have a different approach to still make it fresh. Nevertheless these kinds of tropes are often so hackneyed that it’s almost impossible to impress me with variations on their theme anymore, unless the interpretation acknowledges the danger and really tries to consciously adapt and surprise.

Let me list what I personally find to be the worst contenders among these tired CRPG tropes.

This is probably the absolutely worst contender of them all, the one that makes me groan the most when I stumble upon it. Almost every modern RPG seems to want to make a version of this trope and it’s almost always conform to the same template. Typically there’s a speaker with a loud and ardent voice announcing each fight in the arena. “Ladies and gentlemen, we have a new contender for the title of champion.” The fights start small, with easy critters or enemies, gets harder for each fight, and sometimes there may even be several different enemies at once. There may be friends joining in but usually you’re on your own.

In between the fights there may be cutscenes with potential boss characters. If the RPG developer is particularly cunning, you may even have a choice in the final fight – kill or save the boss. Having won the arena games, you may be rewarded loot apart from the obvious title as champion. If you have started this arena game somewhat late in the game, it might even have been a walk in the park for you – and then the loot probably won’t be all that awesome either. It’s also possible that people around the arena (maybe even in the entire game) now acknowledges you as the champion as you casually pass by them.

One thing I love is when an RPG developer takes this concept and completely turns it on its head. That’s what I felt Bethesda did in Fallout 4. There was this place called the Combat Zone that looked suspiciously like an upcoming arena game. Both from the outside and when entering the building I was pretty sure this was exactly it. Inside there was a cage with an arena, ready for the typical template to be initiated. There was even the announcer. Groan.

But then as I took a few steps towards the cage, I was attacked by raiders all over the place. It turned into a big gunfight lasting a few minutes, after which only the announcer, a woman and I were left standing. A quest was then offered that had absolutely nothing to do with an arena game. That might have been an indication of Bethesda also being tired of this trope and wanting to try something else.

Or maybe I just haven’t found the real arena game in Fallout 4 yet.

This trope can of course be designed in all kinds of ways and certainly there might still be variations I haven’t quite seen yet. Still, it’s amazing how often RPG developers manage to step on the same toes every time they introduce some kind of dream, alternate reality, flashback, or whatever disconnects you from the usual world. Typically you enter a dream or a virtual reality that you somehow have to escape from, and the surroundings will be substantially different. There may be different colors, blurring, or the level architecture is all alien and strange. 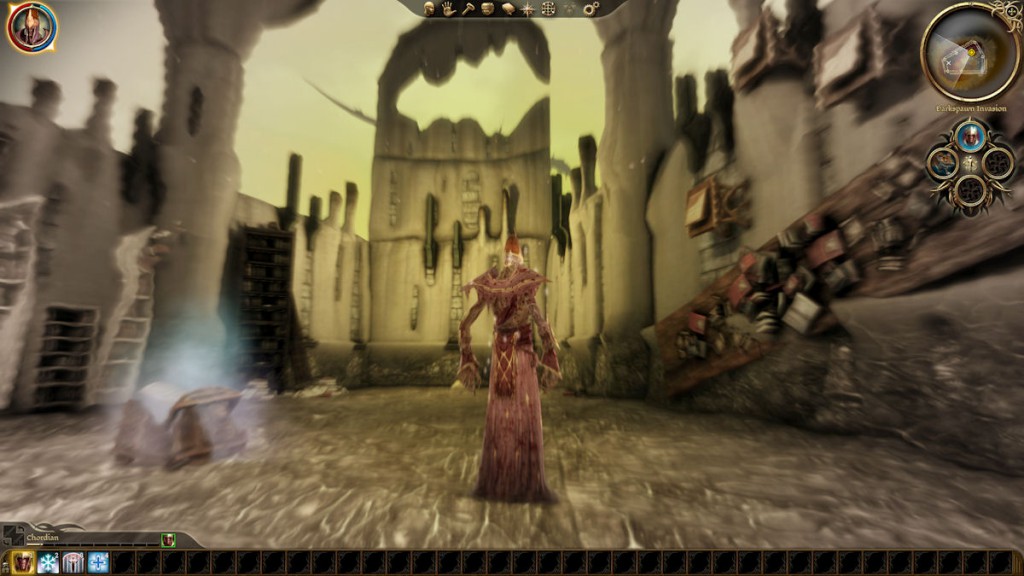 The worst kind of this trope is when the entire set of actions and rules are also completely replaced. If the game is particularly naughty, you may even be thrown right into the action before you’ve had time to get acquainted with the new magic spells. Maybe the dream world even switches you across surrealistic places each with limited space, where most of the gameplay is cutscenes and dialog and then maybe a short but somewhat tough fight.

Within just a few minutes you may be longing for the safe “reality” you came from, where you’re used to the action bar, have awesome gear, trustworthy companions, and know exactly how to kick ass. You may even let out a sigh of relief upon finally returning.

Acting in a theater

Here’s another one of those tropes that I feel RPG developers should really stop doing, at least according to the usual template. You find a group of actors or otherwise related quest givers, and before you know it you’ve been handed a script and asked to act a role on a scene or in a plaza. Maybe you’re taking over from another actor that have been injured, gone missing, or plain died. Typically you’re asked to repeat lines after memorizing them, and the quest can require a restart if you mess this up. Sometimes memorizing the lines are so annoying that you may actually think about consulting a walkthrough. 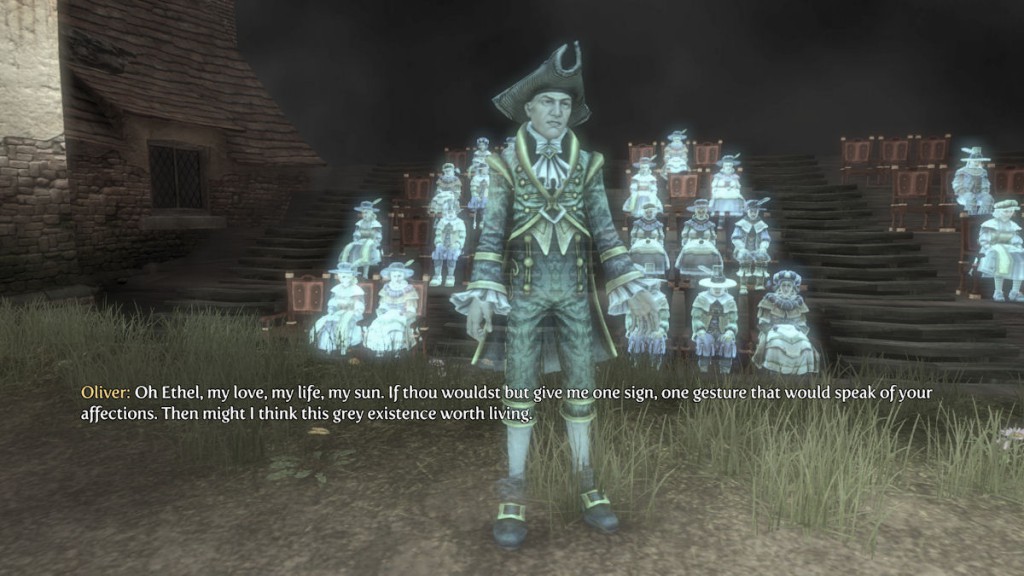 This is another one of those where I let out a sigh when it’s over. It’s usually more trouble than it’s worth the reward, especially if it’s obvious that the quest just uses the same old template.

Being a lawyer in a trial

Just like with the dream world trope, this one still have the potential to be designed in refreshing ways, but again I have seen the same template repeated too many times for my liking. The odd thing is that this trope often comes with an auxiliary component that is actually quite awesome by itself – the investigative part. It may come in the form of investigating murder scenes or questioning NPC to get the information required for the trial. In some CRPG this may be the heavy part of the quest and that’s when the trope can still be reasonably pleasant.

But too often I have seen the trial itself take up a considerable amount of time. You’re questioning witnesses, an attorney objects, and you have to choose the right dialog options to get on top. Maybe one or more NPC (external or companion) may enter the court room and spice up the trial with additional information. The trial may even be paused and thus run in several stages, where you may have to continue your investigation in between to keep the upper hand.

The second one is the trial design that easily manages to go on for way too long. Just like with the dream world, you may wish for it to end so you can return to the gameplay you like better – exploration, looting and killing. And it may especially be a shame if the trial was actually quite refreshing to begin with.

This one depends a lot on how much focus there is on the building and maintaining part and I’m actually not entirely opposed to it. Sometimes it can be nice to upgrade a castle with more rooms, better defense and additional soldiers, but again, it can easily be overdone and get to be too much of a hassle. As a story CRPG to me is mostly about exploring and questing, it should only be a minor departure before getting back on the road again.

Maybe it’s also because I tend to split up a story CRPG from the mindset of constructing something. When I want to build something, it’s usually something I want to focus on completely and then I yearn for a certain kind of complexity in standalone software. Kind of like when creating levels or maps for games. So for me, housing in CRPG should be kept at a level where there are merely placeholders for awesome loot or achievements. Not adding walls, doorways and rotating furniture.

I know I’m probably very much in the minority here and I have also contradicted myself from time to time, for example back when I even installed a home mod for Morrowind to get more tables and mannequins. I’ve also fiddled around with housing in EverQuest II, enough to make the above look like it was written by someone else. But those were also games from about ten years ago. There was a novelty to it in the beginning as there is with everything in life.

So, what’s the worst thing a CRPG developer could ever make me do? Probably act as a lawyer in a theater play of a court room trial in a dream world located inside an arena I’ve been forced to build myself. That would be awes… I mean, HELL!

If you found this interesting then I also recommend PC Gamer Confessions.