This was a really charming adventure game with minor stealth and action elements. I’ve always been fond of European graphic novels and thus the comic book art style, the multiple parallax layers and the cute animation was right up my alley. Most of the time it was strictly side-scrolling with exits (like a doorway) to another plane closer or farther away, but there were also healing mini-games, minor QTE, and pursuits in a car driving towards the camera. The game was also educational. Sometimes a piece of history could be popped up with a paragraph about what really went on in the first world war.

While the game itself was charming and had relatively easy puzzles, the story and the depiction of the first world war was anything but. It followed the story of Emile and Karl (both drafted into the war on each side), Anna the nurse, and Freddie the American that joined voluntarily after his wife was killed. They met up and got separated repeatedly on several occasions, and sometimes they even got captured or wounded. There were many grim sequences with lots of blood and death. Bombs falling, explosions, shooting from afar, planes, tanks, armies – lots of pain and despair to be seen and felt all over the place.

The side-scrolling part was by far the most prevalent. Sometimes it was about finding the right things to use on hotspots or give to a person, i.e. the good old chain-style adventure gameplay traipsing forth and back. At other times the side-scrolling was going strictly to one side, avoiding falling bombs or shooting-and-reloading gun turrets, or it could be stealth with creative hiding behind moving sheep, carts or just stationary objects, avoiding enemy soldiers and their spotlights. 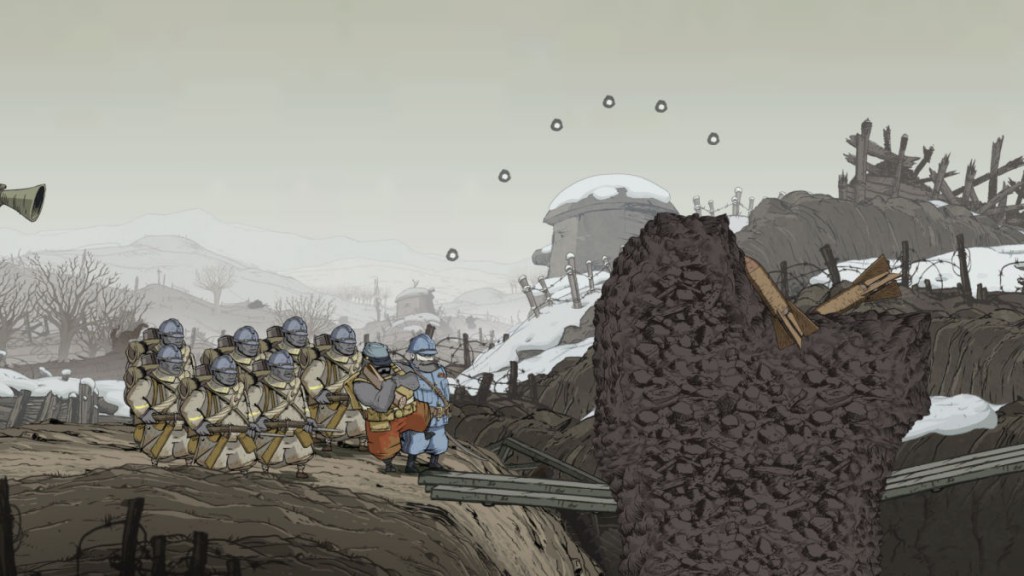 Some of the more intricate puzzles could involve e.g. rotating pipes, pushing stuff, throwing objects in an arc (to bring something down or make something explode) or distract someone. Each character also had their own ability. Emile could dig far into the ground, Freddie could cut barbed wires, and Anna had this mini-game where I had to hit a QTE key on scrolling pulses to successfully heal a wounded person. The most ingenious puzzles involved a clever dog which could be instructed to do its own stuff by holding down a key (everything went black and white) and then hit another key to e.g. pull a lever or climb through a small hole and fetch something. This added sort of pseudo cooperation to the tasks.

And there were fluff items to be picked up for collections. Of course. This is a Ubisoft game.

One thing I found particularly charming about this game was the way the characters often sounded somewhat incomprehensible, much like in Papers, Please – especially when ordering Walt the dog around. Sometimes tasks were given by other NPC in the form of a small rebus. No need to translate that to other languages. I think there were about three car chases, and they were among the most difficult action stuff avoiding gunfire, bombs dropping and other vehicles. There were also a few elaborate “boss fights” against sort of a baron, and there were one area in a prison camp that was quite big. But in spite of all this variety, the game was never really that hard. The game autosaved liberally and after another try or three, I usually got past whatever was in my way.

But it could have settled with two or three chapters. Four was a bit too much for this type of game.