I spent this Saturday morning playing through this charming first person puzzle adventure game. It took only about 2 hours to get through it, but I was fine with that. I’ve actually been yearning for shorter games lately. Of course, the length depends on the genre but especially platform, puzzle and adventure games can easily overstay their welcome in my book. (Maybe it’s because I’ve completed so many of them?)

One thing that puzzled me about this game was a warning I was shown when starting it up. Fraps has been known to crash D3D11. Okay. I’ve been using Fraps as my loyal companion for years on end, snapshotting screenshots for hundreds of games without trouble – but that message was probably pointed towards video recording (which I almost never do).

Either way, the message felt out of place. It almost looks like a personal vendetta against Fraps.

As a first person puzzle it used the recent fad of having an eloquent narrator comment on a lot of findings, sometimes philosophizing his existence as the god he clearly believes he is. He reminded me quite a lot of the narrator in The Stanley Parable. Sometimes entering a room triggered a long debate which went on a bit too far, but for the most part he was entertaining. Especially towards the end, where he became extremely paranoid. I won’t spoil it for you, but it was certainly interesting.

The puzzles themselves sometimes felt surprisingly imaginative and original, even as an experienced gamer with hundreds of puzzle games on my conscience. The game did start out a bit slow, and there was a moment there where I was afraid it was going to side a bit too much with the walking simulator genre. But soon puzzles arrived, and although most of them were easy, they were quite varied.

If anything, they probably should have eased up a bit on the eye puzzles.

The eye puzzles were mostly about keeping eye contact with an eye object to open a door, or maybe the other way around, looking away to solve a puzzle. There were also puzzles about alignment, triggers for rotating bridges and pathways, easy timer countdowns, transparent balls to lit up or transfer states across, even flip tile floor puzzles. Some were of course old hat, but as mentioned a few felt original as well. 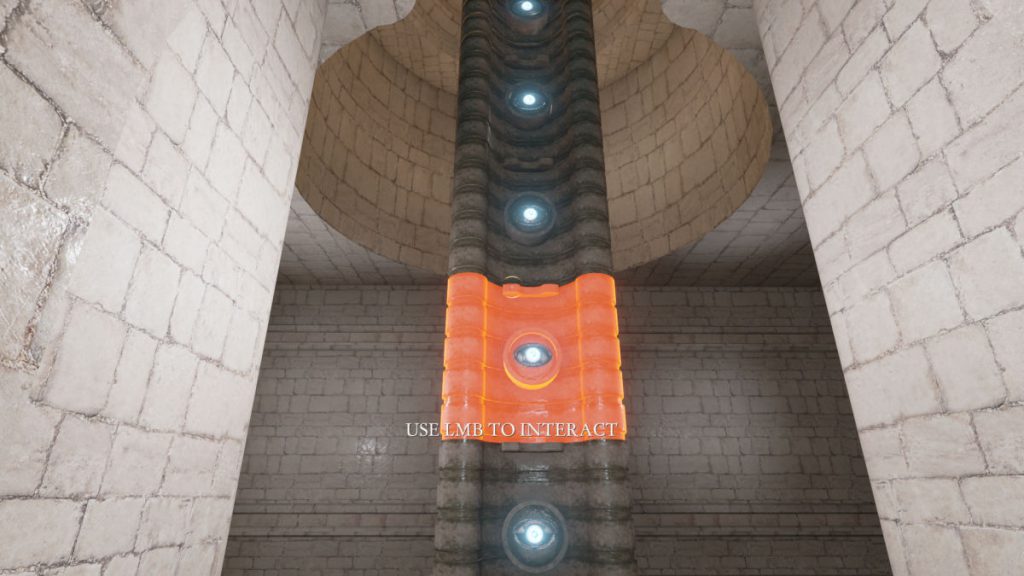 I mentioned in an earlier game post that there always seem to be this one puzzle that feels strangely difficult, as if the logic of it completely eludes. My nemesis in this game was the pillar with rotating rocks, each with an eye object. I never figured out what the idea behind this one was. I just ended up with my back towards the door, turned all the eye pieces towards me, and clicked up and down the pillar.

All the other puzzles I figured out relatively quickly, but some of the later ones could be slightly difficult to handle. There was this one puzzle with floor tiles forming a carpet, with the tiles flipped by me actually looking at them. I solved it by edging my mouse look towards the outer tile rows or columns, then towards the corners. As you might imagine, there was a lot of tweaking here. The idea itself was great, but the execution lacked something to be desired.

Nevertheless, a charming puzzle game that I can recommend. And it had great music too.