Another Saturday, another shorty. This one lasted barely two hours and turned out to be one of those art games with more mood and style than gameplay. It was constantly raining hard, the grass was waving, and the 3D engine added multiple layers of surrealistic shapes. I was controlling an alcoholic detective yearning for his lost daughter, and he was narrating both this story as well as various findings on my way.

There are several good things to be said about balancing tough challenges with streaks of nothing to gear down, but this game felt like it was overdoing it a lot. The game was for the most part easy and only offered more or less dexterous jump puzzles. Sometimes a cannon had to shoot a seesaw to get it in position or I could fly a small airship for a while, pressing one button to thrust it upwards past the saw blades.

But then as a sequence of this was done, our hero was merely wandering along for minutes and minutes, no jumps, no nothing. Maybe a very long bridge or past a small town. This is typically where he started narrating a lot about his miserable past and how he deserved his fate. These passages were so long that it made the game feel like part platformer, part walking simulator. It was too much of a good thing. 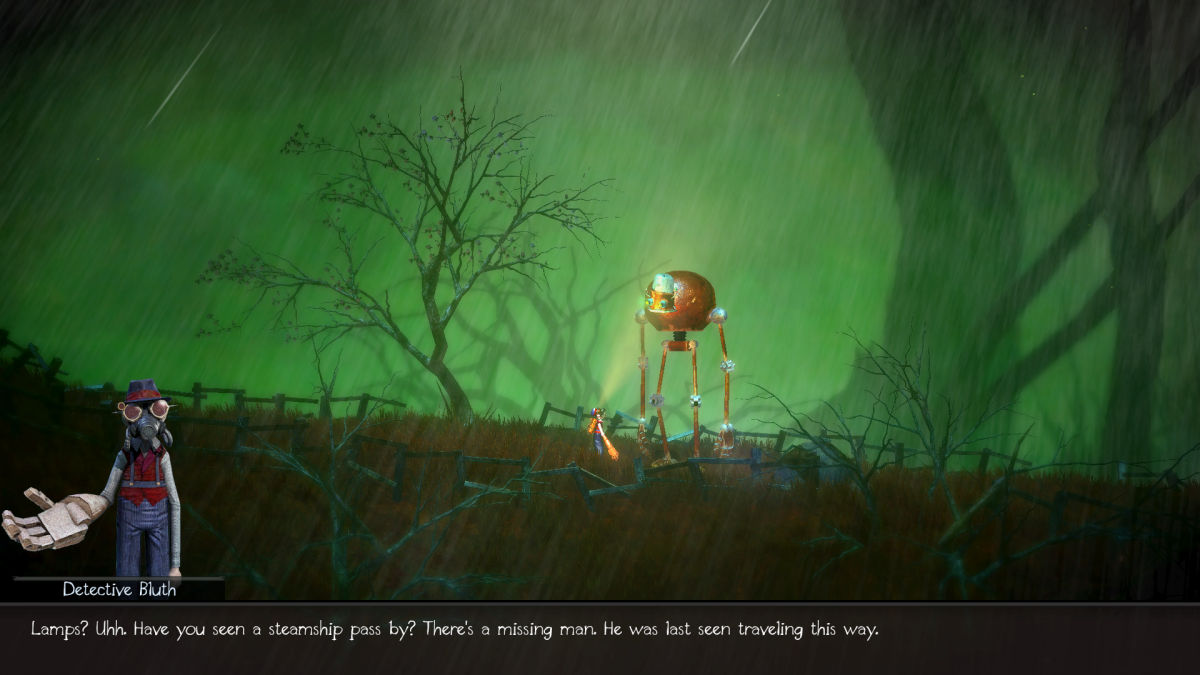 The game made use of the 3D engine to zoom in and out depending on the surroundings. There was even a spot where the game turned everything on its side to make sure we all saw the entirety of a town. Wouldn’t want those houses in the bottom to go to waste. Sometimes our hero had what he claimed to be blackout – the screen faded out for a second or two – but it was probably just to cover up a level load.

Musically, it was violins and cellos.

Sometimes I met a creature – typically a robot but sometimes a big monster that would probably have been a boss fight in most other games – and we had a small text-only conversation without actual choices. It was also possible to take a drink, but I only tried this twice. It made everything swim for a while and it didn’t seem to have any other discernible effect.

Our detective could double jump and this was required quite a lot. There were moving platforms, saw blades, chains to crawl up or swing to the sides, green buttons to bounce from, hills to slide down, and so forth. Falling put me back to a checkpoint, some of which could be quite some ways back.