Imagine if you took an isometric action RPG with a smattering of Robotron, changed the action to be mostly like V.A.T.S. from e.g. Fallout 4, added great Art Deco parallax graphics, a sword with staccato comments, and atmospheric music that often have singing on top as well – and you basically have Transistor.

It took me about 6 hours to complete this one but I was seriously considering abandoning it after an hour or two. The combat was innovative and polished but was still problematic for me. The gist of the game is a turn-based part where you stack “functions” (abilities) in a limited queue and them fire them off with super speed, making you feel like The Flash. Then comes the sour part. The queue needs some time to recharge itself and you are extremely vulnerable as things are now real-time. Because of the huddling nature of the confined combat areas, it’s easy to get pummeled left and right, even when zapping around with a teleport ability I earned early in the game. This goes back to me wanting to kill as many as fast as possible, and if my queue doesn’t deliver enough damage, I may take too much damage in the real-time part. Emptying the health bar temporarily burns out an ability slot, forcing me to use other means of attacking. Burning out all attacks of course means death.

For most of the game, this system just didn’t click with me.

I have played and loved turn-based games before, but the combination of planning and kiting here often felt too punishing. Abilities are earned mostly from leveling up, and they can then be combined in just four action bar slot combinations to give the primary one more damage or other similar expansions. However, the shifting screens doesn’t give the greatest overview of how the combinations work and it made me lazy. I just kept slapping abilities on the ones I liked the most. I’ve had a lot of joy out of increasing my power in past RPG, but the way it was set up here didn’t give me the same desire to be OCD about it. 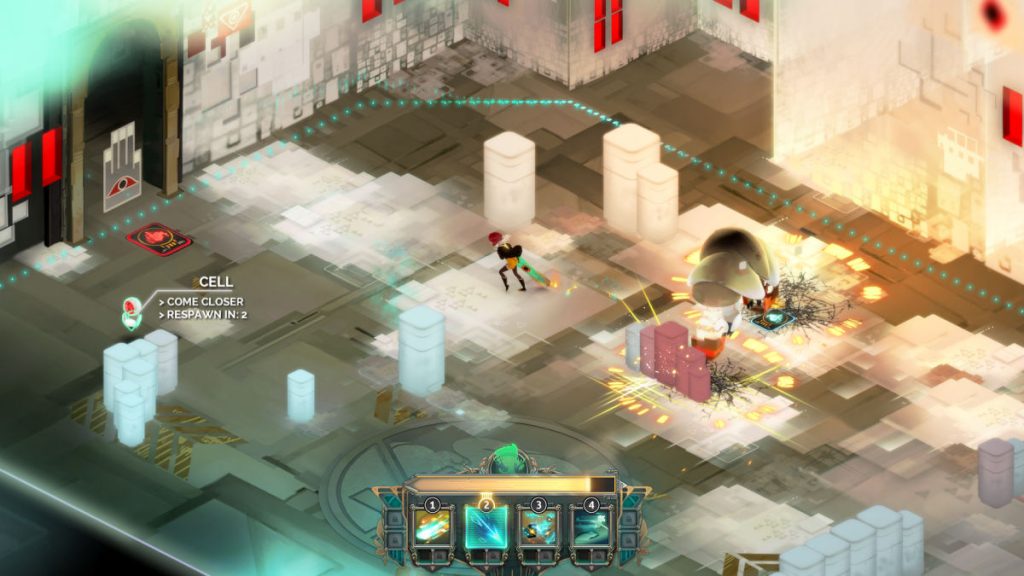 To make matters worse, the enemies in most of the game are spry and persistent. Most have roots in programming of some sort – there are bad cells and processes but also robotic creatures such as creeps and dogs. Almost all of them have one thing that make them enormously annoying, like shooting often and intensively, running really fast, or arriving in great numbers. Some can suck you in with their fire, bombs are thrown and you have to get out of the fire, and cheerleaders connect to comrades to protect them with a force field. Sometimes teleporting around the arena in real-time is even futile as some enemies can move their laser beams instantaneously. As the game progresses, parts of the arena is covered to keep you guessing, and there are mini bosses and bosses, often accompanied by respawning minions.

There were times where I could see how the turn-based system was unique in an fascinating way, but having completed the game, I think the crux of the matter is that most of the enemies are just way too frisky to begin with. I really feared the end game. What kind of super enemy was going to hand me my ass here? But although something new was indeed introduced – man – something interesting also happened to the gameplay. The men could do a ton of damage by themselves and especially by throwing “haircuts” in my direction, but to counteract that they did so much damage they were also slower and somewhat blind. They only uncloaked and got aggressive when I was in their line of sight. The unexpected slowness of these late game portions made the combat much more tactically interesting for me. Suddenly I could teleport around in a sensible manner, back stab a few times or plant a bomb to shoot at a distance, yet still keep them at bay in the real-time recharging sections. I enjoyed these fights much more.

I couldn’t help but think that they should have started the game with this pace. 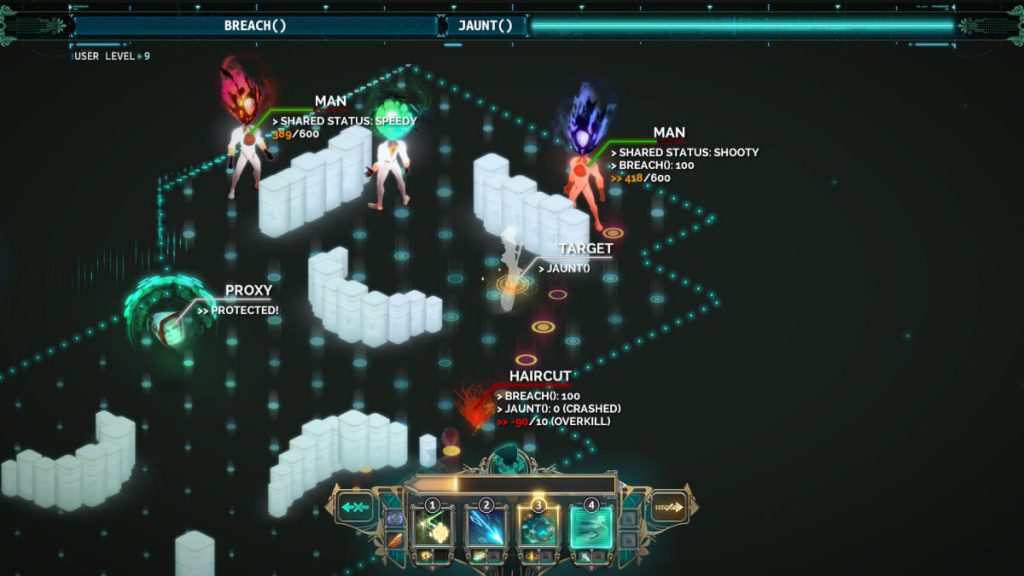 The story itself was mostly uninteresting. The sword commented on things, much like the narrator in Bastion (by the same developer) but luckily in a much more moderate manner here. Often just two or three words. It was an excellent nerf as I felt there was too much babbling in Bastion while I was in the heat of battle. The game starts with what looks like the boyfriend of the female protagonist having been killed by an electronic sword that she, Red, then uses for the remainder of the game. There’s a small handful of antagonists, some of which become bosses, as well as a big “spine” that smacks a ginormous claw into a pathway as a regular surprise. But for the most part, the story felt like it was barely there.

The atmosphere was quite successful. The Art Deco graphics was fantastic, the music varied, and the terminals added some background information. I even found a backdoor to a domain of my own with tests and items to play around with, although I only bothered to try out one of these tests. The levels were very linear, not much exploration was possible, yet the isometric edges didn’t always make it easy to see where to go next. I liked the “COME CLOSER” words that appeared on interactive items. Somehow it also felt necessary as it wasn’t always easy to see what was interactive in the first place.

There were many weird things I have only seen rarely in games or even never before. You could make Red hum by holding down a key, flourish with another, and there were limiters that could be added to functions to make things more difficult. As you can probably guess I didn’t use any of these. I never figured out what the idea was with the side slots on the action bar. Putting abilities into them didn’t seem to do anything. Red was mute (apart from the humming) but could sort of talk to her sword spirit using a comment field in news terminals. Some snapshot monsters took photos of Red and showed it onscreen for a split second. And the end boss was turn-based versus turn-based – no real-time stuff there.