This third person adventure game was completed in less than four hours, but somehow it felt a little longer than that. It was for the most part easy but also charming, and with many original puzzle ideas. The closest thing I can find to compare it with is the American McGee’s Alice series, only without the combat. It had the same level of surrealism and also felt like it could maybe sort of fit into that universe somehow.

The game touches upon a light story of the small kid Quico and his alcoholic father in a few brief cutscenes, but by far most of the game is spent solving puzzles in arena after arena with metaphorical substitutes. In the beginning there’s another kid that teases you, and it doesn’t take long before you get the small robot Lula on your back as a jet to make double jumps possible. Lula can also be asked to fly over and activate a circle by clicking the right mouse button. 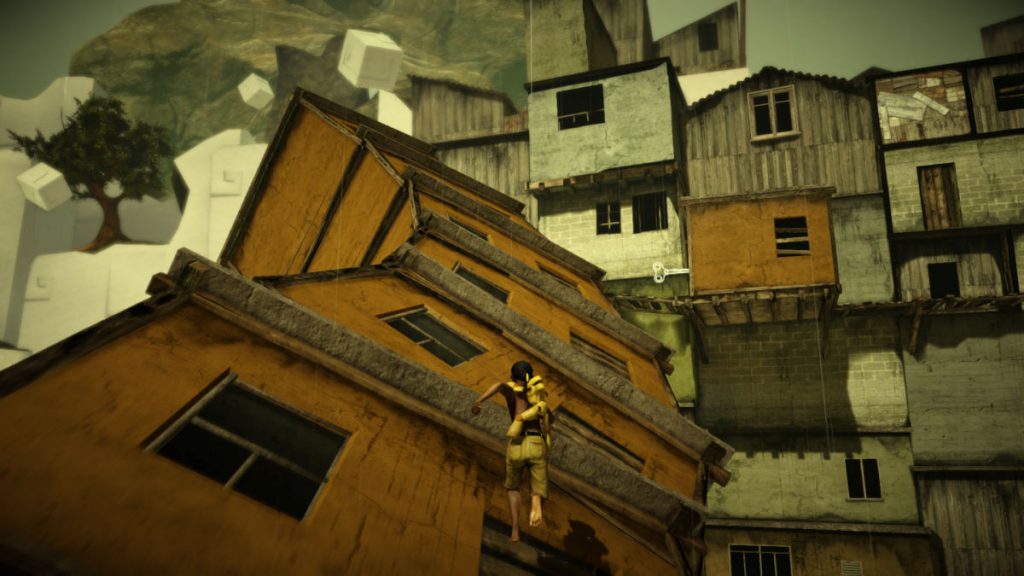 A general style of puzzle design is that white chalk lines means interactive stuff. Animated cogwheels drawn on walls can be clicked to make a building walk to a different place so you can jump across roofs. Handles can be pushed or pulled to tip over a stack of buildings into a “snake” you can run across. Keys can be turned to open up a passage, typically by walls and buildings being lifted away.

Most of the arenas take place between a bricolage of small buildings.

As soon as the red monster turns up, sleeping as it turns out he likes to do a lot in the game, it doesn’t take much algebra to figure out that he’s of course a metaphor for Quico’s dad. He can be lured in the direction of pressure plates with orange fruit that he loves, but if he gets hold of a frog (alcohol) he gets all fiery and it’s time to run like hell. Luckily the games paces the monster so you can just about keep up running away, unless you cut a corner too fast. Then he thrashes poor Quico, after which it’s back to more running.

These parts are actually not as tough as they sound, though. You sort of get used to them.

I was repeatedly impressed by the inventiveness of the puzzles in this game. Just as I thought that the game would go lazy and repeat earlier ideas, it offered a completely new puzzle idea or a different goal. Some basic elements are of course used all the way though, like jumping on the belly of the sleeping monster to reach a ledge, but I also had to move him through streets on a centipede, drive elements of houses around a central hub to form a bridge, curl the entire arena of buildings, and much more. 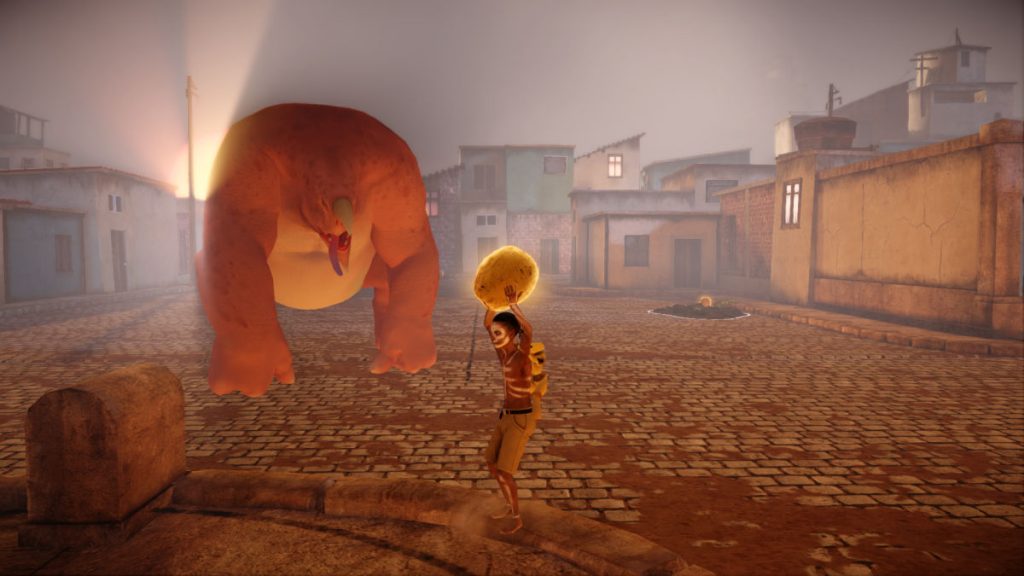 There was some very nice relaxed guitar music as well that fit the scenery nicely. Sometimes it sounded like it built up slightly as I got going in an arena, like the game acknowledged that I was choosing wisely.

Best of all, you could pick up frogs as big as yourself and splat them out against walls.