This was an FPS from 2013 with puzzles to be solved by an ancestor of Alan Quatermain. It took place in 1938 in Egypt, Arctic and Mayan ruins, and usually together with Jennifer, a female partner. It was all very Indiana Jones. Together with waves of Nazis, it made it feel like Wolfenstein meets Tomb Raider.

It was also an unremarkable game in many ways, with a B-movie plot featuring cliché-riddled dialog and stereotypical characters. The fights were simple and predictable, but luckily also not quite as common as I expected. There were a lot of calm moments solving puzzles or finding treasures. The latter could upgrade my health, marksmanship or my flashlight, but it honestly didn’t feel like it mattered much. 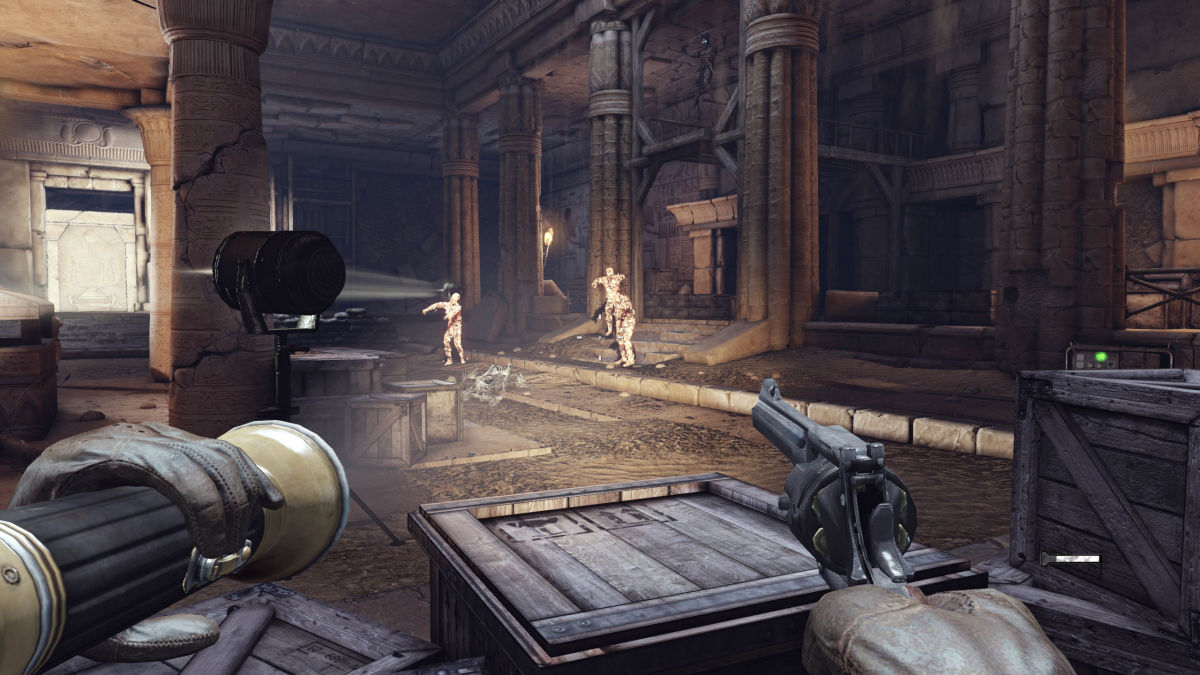 At the bottom line there were a lot of flaccid elements of this game to give it an equally mediocre score, but at least the level design was almost worth the price of admission. It wasn’t phenomenal – get up close and some circles were octagons – but from a distance, the environments actually looked quite nice.

But the game design wasn’t always solid. There were a lot of cutscenes without interaction for many levels, then about halfway through I suddenly had to hit keys and mouse buttons in what the game considered a typical QTE. That was late for this change of heart. Most puzzles were easy and took only seconds to solve through, but there were confusing exceptions where the solution was pretty obscure.

Same thing about finding the treasures for upgrading my abilities.

Most enemies were Nazis or Russians, and their AI were limited. Typically they ran in from their spawned distance, hid behind a wall or a box (which they ardently shot into in an attempt to shoot straight at me) then perhaps ran a bit closer with a death wish like in older FPS. I could only carry two weapons, but the ammo for them often emptied out, so I had to swap them out a lot. I could also throw grenades.

Damage was the modern kind with blood in the edges of the screen and recouping behind a box. For some reason my aim didn’t feel entirely precise; it was as if it moved in artificial steps. This made the enemy hit me more often than they should have been able to. Also, they were sometimes bullet sponges.

And my companions never did much to even out the fights. The usual deal there.

Sometimes mummies came crashing out of vertically placed coffins. These guys could be made vulnerable by focusing my flashlight on them – their skin then turned into lava – and a shot or two finished them off.

Just as in Tomb Raider, I had a couple of pistols with unlimited ammo in case I ran out in others. 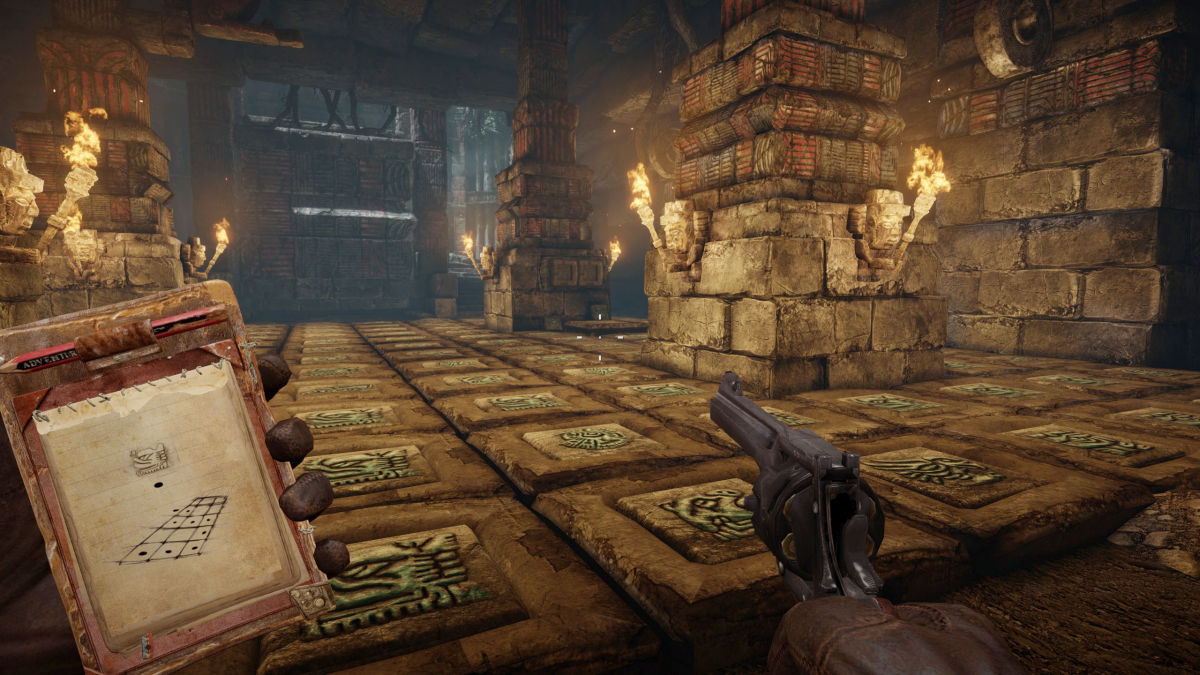 The puzzles were typically a few levers, poles, signs or dials to operate. Most were easy, much easier than you would find in Tomb Raider. Even so, there were tips to read in a notebook with scribbles left behind by Alan Quatermain, and if Jen was accompanying me, she happily repeated the same tip over and over until I had finished scrounging for treasures and finally had time to deal with the main puzzle in the room.

Falling into water was deadly. Our hero is a tomb raider and doesn’t know how to swim!?

There were almost no real jump puzzles. Every time I thought there might have been one – invisible walls. Some treasure puzzles had collapsing floor tiles, though. Some jumping was indeed required there.

I really don’t like how today’s FPS hide away the ammo status. I had to swap or pick up weapons to briefly see this displayed. I miss the good old days where health and ammo was always visible.

Not long into the game, Hagen – a skinny German guy – joined our team.   (A faithful, trustworthy companion.)

Some levels had grenade trip wires that could be shot or disarmed. And yes, the very first time I just merely walked over it and got blown to pieces. As I said, it’s been a while since I last played these kind of games.

There was a sequence in the outside of Arctic where a blizzard forced me to follow red lights in front of me. It reminded me quite a lot of a similar sequence in SOMA, a game I completed about a month ago.

Most of the treasures were just a question of finding it in a hidden corner or behind a trap. However, there was one treasure where I had to solve a 3×3 slider puzzle. Solving it even gave me an achievement.

As mentioned above, most of the mandatory puzzles were easy – with a few obscure exceptions.

It one place I had to shoot a wire to drop a wooden platform, serving as a makeshift bridge. Jen annoyingly kept repeating the tip for this, but the rope was pretty long and there were no red cross hair changes to be found on it. I unexpectedly had to seek out a weak part of it that could actually be shot.

The puzzle about turning around a cloud of pixels at the end of the Arctic sequence was also nonsensical. I had no idea what the cloud was supposed to resemble, so all I could do was trial and error. Tedious.

And after that Hagen betrayed our heroes. As we always knew he would. 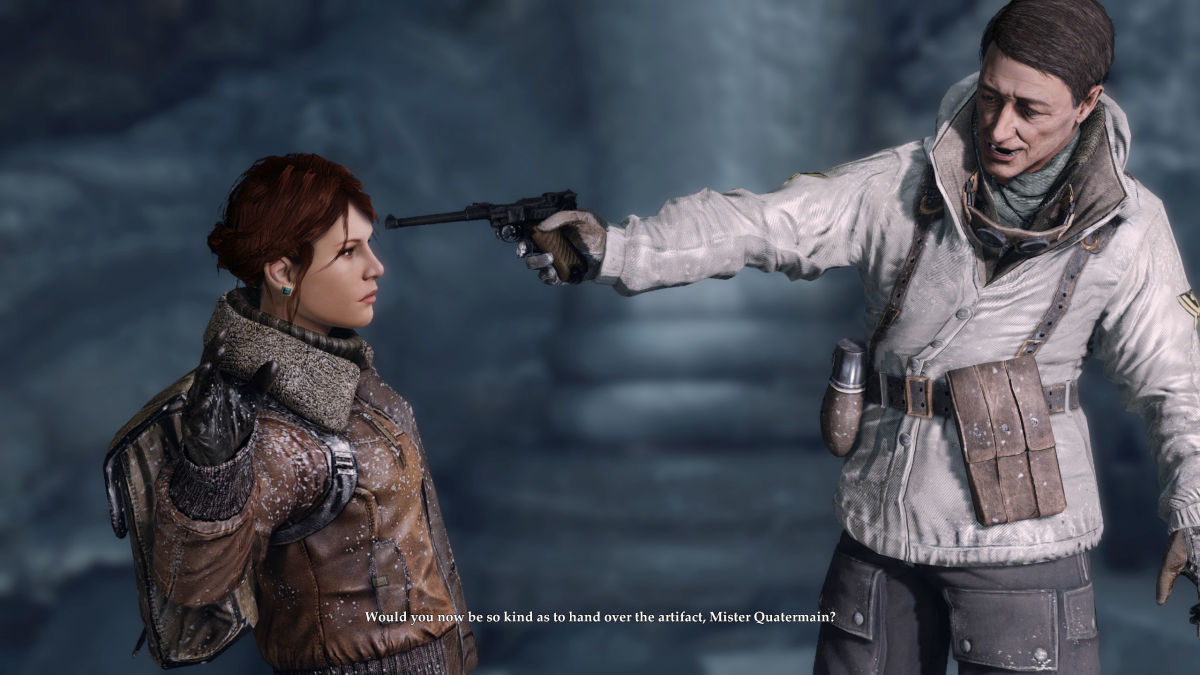 There was another dubious puzzle in the end of the mines where I had to reach a control room with a bad guy holding Jen hostage. It took a long time until I could see how I had to operate a massive crane on rails to reach them, and even then it had to be aligned in a certain way. However, the game made ardent use of invisible walls everywhere, so I constantly had my doubts that I would ever be able to make the jump.

When I finally managed to jump through a roof window and into the control room, our hero only found Jen in the following cutscene. The bad guy was nowhere to be seen. Did I do something unexpected?

No. It must have been a cutscene bug. Plain and simple.

With so much negativity, I actually pondered stopping after the Arctic area. Still, the environments were often pretty and some of the puzzles enjoyable, so I decided to push on. And I’m really glad I did, because in the mines I got to ride a mine cart like in the second Indiana Jones movie – and it was awesome!

Especially the second ride later was truly epic. One of the best mine cart rides I’ve ever seen in a game.

The final place in the world was in Guatemala, among Mayan ruins. Not far into the jungle, Quatermain and Jen found an old ship – because why not. We even had to use its cannon to blast a hole in a wall.

After solving an easy jigsaw puzzle (complete with rotating pieces) the sun eclipsed and a blurry sandstorm spawned mummies in an arena. Mummies turned out to be quite frequent guests inside the ruins too.

Angry beetles now came out of smashed vases. The first time I was almost overwhelmed by them. Later they turned out to be a handy weapon against mummies when timed right with a pistol shot.

There were two boss fights against a robust guardian in golden armor. He teleported around on ruin ledges and spawned a fiery spot that I had to run out of. These boss fights were always accompanied by lots of respawning mummies. The second boss fight was quite long and tiresome, and I also had to shine my flashlight at blue gems and then shoot one of many orbs hanging down from a planetary device. 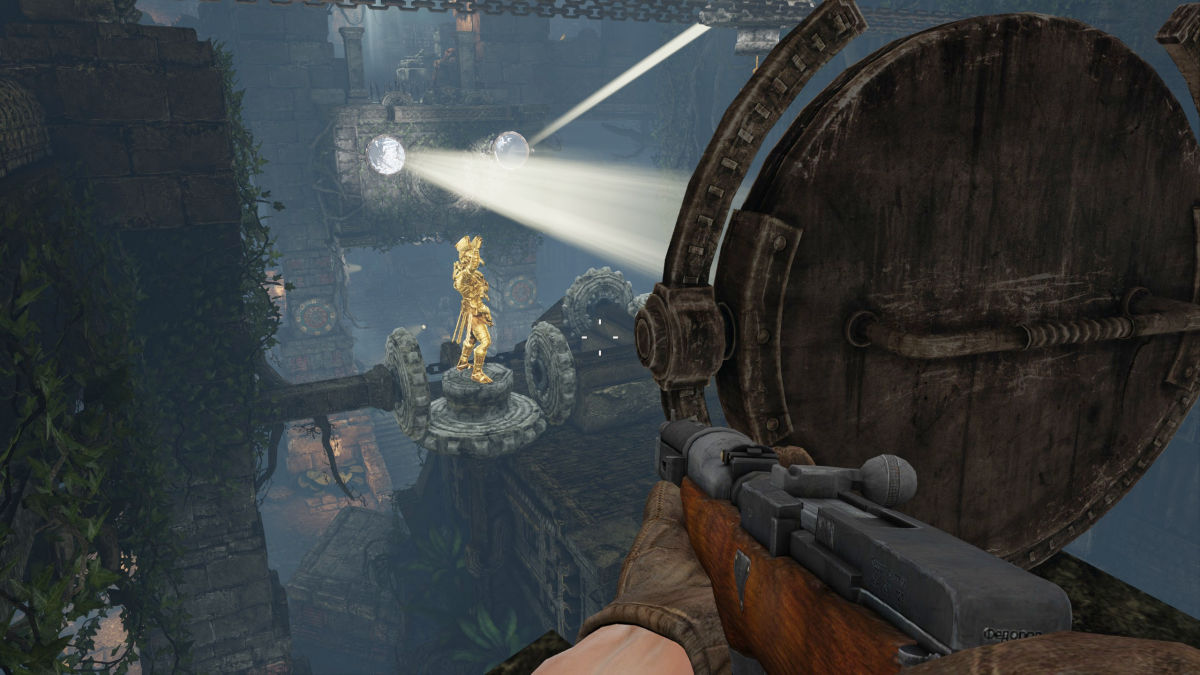 Straight after that, our hero was immediately knocked out by Hagen’s men, then pushed into more ruins without guns to solve puzzles. I was wondering if the developers would spawn mummies while I could only stick out my tongue. There was indeed one mummy in a chamber that I had to puzzle around, but right outside I found dead soldiers with abandoned guns. It could have been a lot worse.

There was a puzzle where my notebook mentioned dots and lines for numbers 1, 5 and 12. Shining light at gems in circles didn’t make any sense to me at all. I ended up solving it by plain trial and error. But to make up for this, I really liked the puzzle where I had to rotate three statues to make up shadows on a wall.

And then came the inevitable final boss fight against Hagen, the skinny German guy.

He placed himself on top of a stone structure I couldn’t reach and threw down dynamite. In this first stage I could damage him with rifle shots. He then put together the two heart parts and got himself a coat of white light to protect him. This second stage spawned the most robust mummy goons that I could only kill by luring them into Hagen’s fiery spots – the same attack that the earlier guardian also used.

I spent a damn long time running around the arena trying to bombard Hagen with an RPG, but he seemed invulnerable. Then came an epiphany from noting how the cross hair turned red when passing by the pillars above the arena. After a few shots on those, half the temple came crashing down on top of Hagen.

For once I could have used Jen shouting, “The pillars! You have to shoot the pillars!”

I really must confess that FPS feel too much like work these days. Even though I have played a ton of them a decade ago, I was never really good at them. Maybe it’s time to abandon this genre completely?