This exploration game – or walking simulator as some would call it – was estimated to be ~3 hours long, and that’s exactly what it took for me to get complete it.

The art and color scheme of this game was out of this world and certainly worth the price of admission all on its own. Each of the four levels had a its own time period and distinctive colors to set them apart, and all humans (and later androids) were old-fashioned 2D sprites always turning the same side to you – albeit sharply drawn like were they cut straight out of a comic book. I really enjoyed this lovely style. 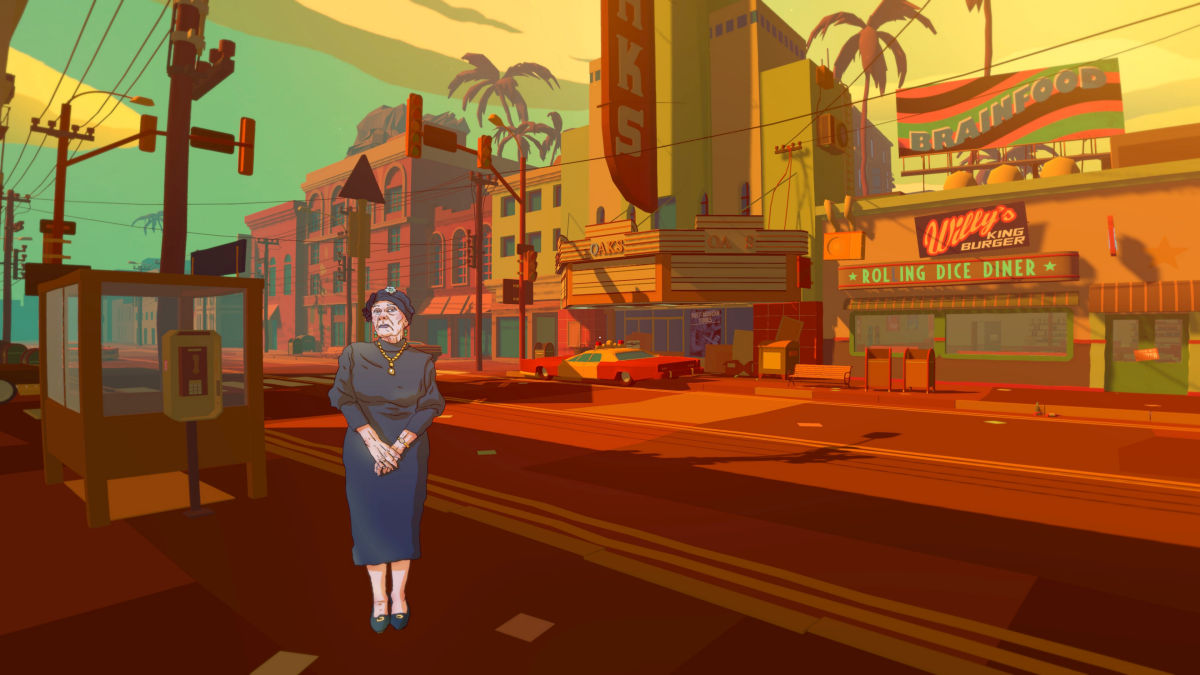 Being part of the genre it was, the game itself was light on interactivity. A level typically had 4-5 “rooms” plus the streets in which to find a television showing a roman numerical of white icons to find. Depending on the size of the “room” it could be about 3 to 6 icons. The icons themselves had to be spotted and then activated by holding left mouse button on them for about one second.

Yeah, the good old game of getting warmer.

Spotting such an icon were varied in several ways. Either it was just well hidden, I had to stand in a certain position to make it appear, maybe an array of objects had to be “cleared” by moving the mouse pointer across them, or some other similar rule set. An icon found and activated would then grow a dimensional sphere on that spot, typically showing part of what the next level would be like.

Having found all icons in a “room” and expanded them into overlapping dimensional spheres would leave it looking quite patched up. Sometimes it would be less obvious how to navigate the rest of it. Completing it would also make a narrator throw a few comments in the direction of my protagonist, Elvin Green, typically about the way he manages to fiddle with the multiverse. 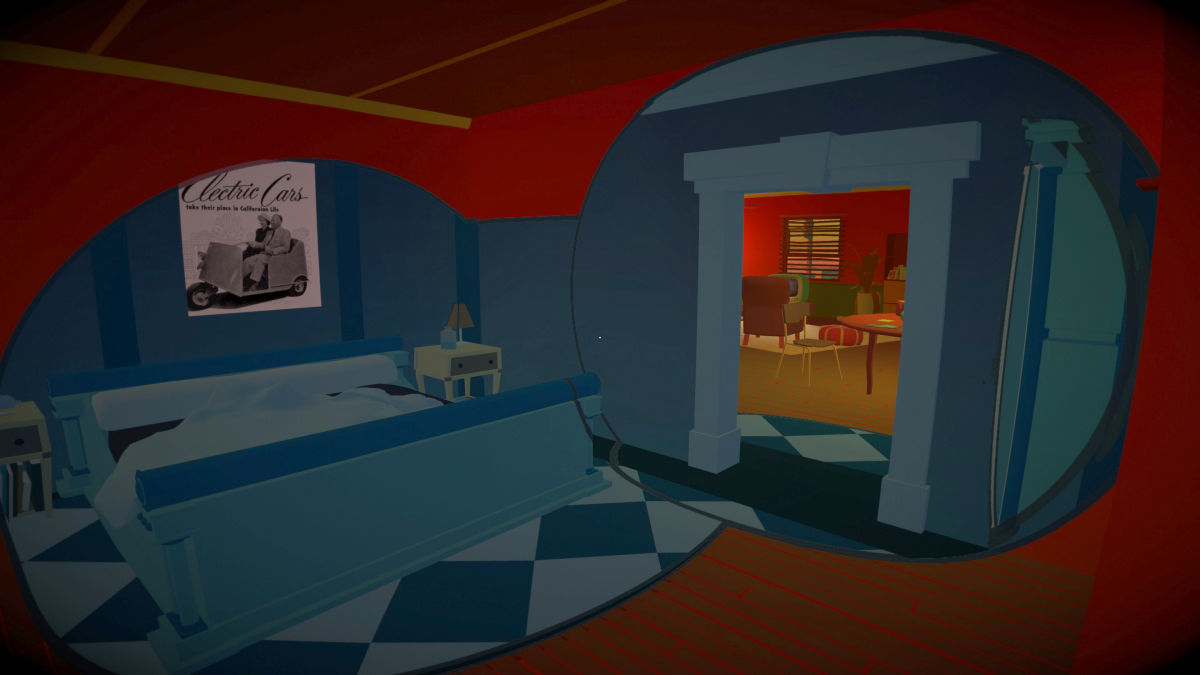 There was also a subplot in each level that could be told by facing the 2D sprite people found. For example, in the first one Elvin Green is a bit of a loser with a writer’s block. There are no real choices regarding this, however. It’s just listen and then get on with finding icons.

As soon as all icons are found in a level, a big and bright symbol appears spread across several buildings and objects. It’s then my job to find a vantage point to line up this symbol and then click it. Next level.

The fourth and last level was the odd one out without any icons. Instead it was a surrealistic pile of all levels thrown together as chaotically as possible. Here I had to navigate through the floating rubble while finding several bright symbols to line up and click, thereby opening up for further access through the level.

In the beginning of each of the first three levels, I was working on a typewriter. Part of the text was already written but I had to type more words, with letters shown as faint placeholders. Slow or fast typing – didn’t matter. After a while something was stealing my attention, typically an alarm or something.

The outdoors area of the first three levels had a street going through part of the town. In the first two levels, cars were riding forth and back. If I tried to follow the roads I was held back not just by an invisible wall – I was also shown a stretched out zoom effect accompanied by a weird sound. You shall not pass! 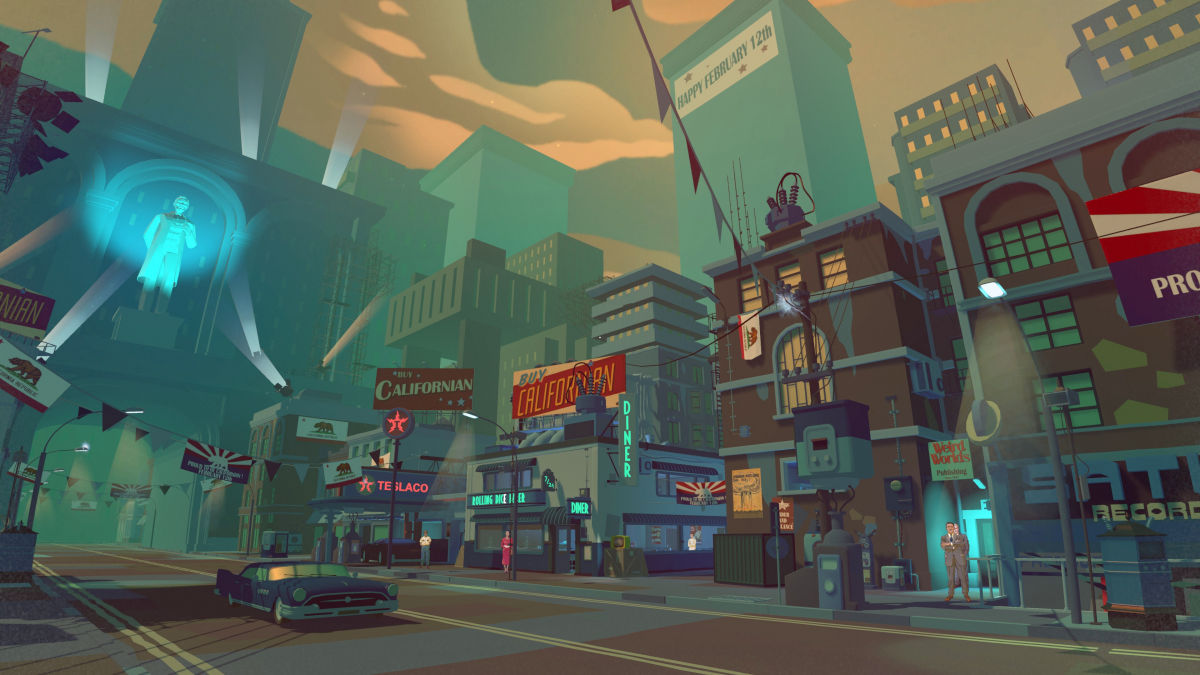 None of the 2D sprite people were animated. In the fourth level – the surrealistic chaos – the developers even joked around by showing previous NPC as 3D cardboards that you could see the backside of.

As mentioned the art was fantastic. I was especially impressed by the posters. They looked like they were drawn by the best out of french comic books. The music was usually subtle, but very nice and suitable.

I found a bug in the fourth level. I failed to spot a symbol to line up and as always happens when I get stuck, I tried everything – including backtracking. This eventually made me drop down to a previously visited path, but something must had triggered off there as the way back was now blocked. Restart level.

I don’t think I have ever seen end credits scroll as slowly as they did in this game.