Dunland was the first region I entered with my level 65 rune-keeper. It was level 65-75, but it really wasn’t much more of a looker than Enedwaith was. A few forum visits revealed a consensus of Dunland being a slightly boring region and that it was better to leave for The Great River as soon as I reached level 70.

So I decided that was going to be the plan. 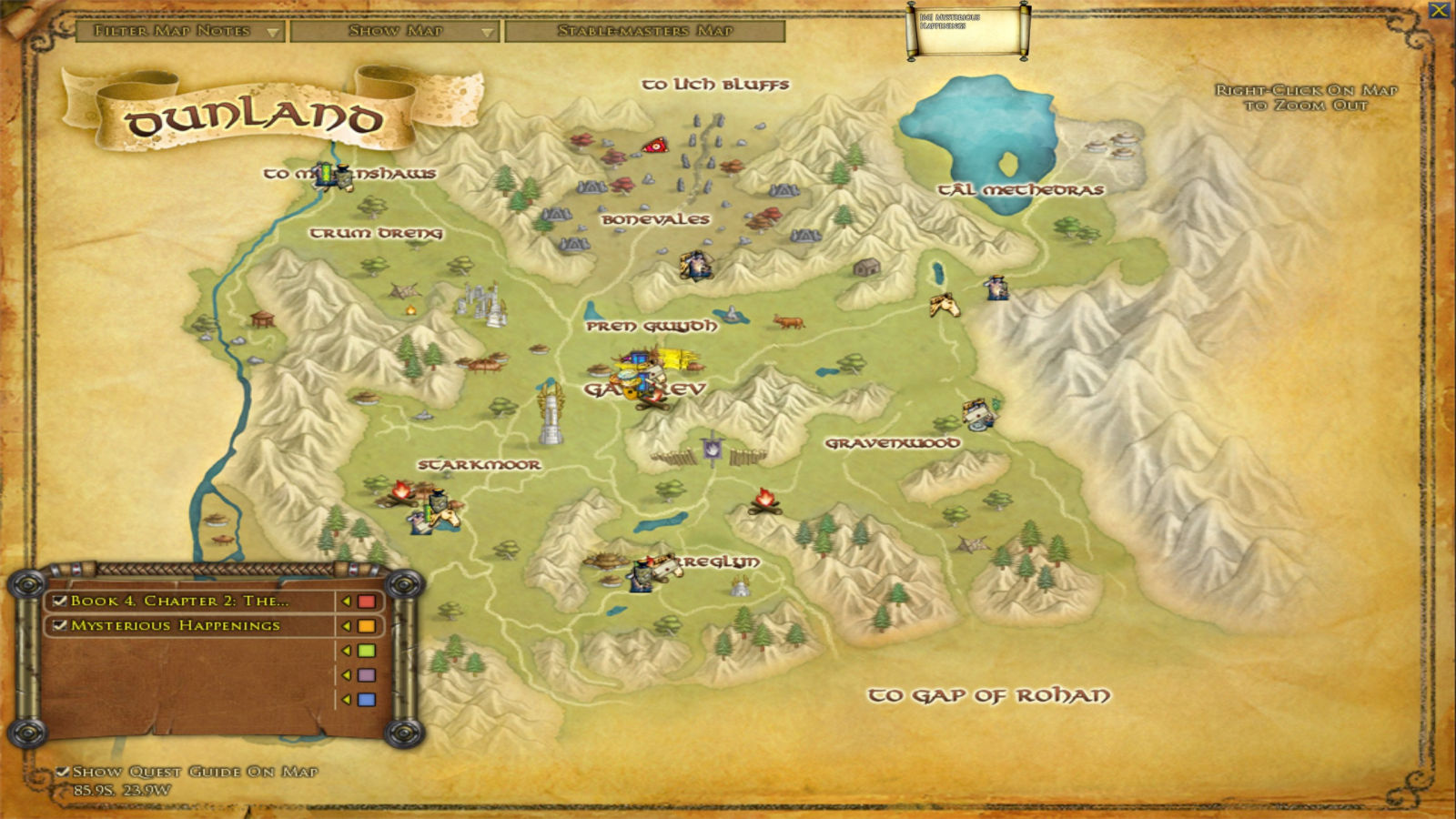 I did all the quests in Bonevales (lots of wights), Pren Gwydh around the central town Galtrev, then Trum Dreng and its small village Lhan Tarren, the secluded eastern lake Tâl Methedras and its snowy mountain town, and finally a few quests by a farm in the northern part of Starkmoor. This finally dinged me to level 70. I barely reached the town Avardin to check in and then left the region behind for The Great River.

Mobs in Dunland itself were wolves, boars, wargs, men/half-orcs, oxes and a few caban.

I must confess that I agree with the consensus. Not a lot of interesting things to look at in Dunland. Hills, rocks, the same prefab building with curved stairs in the side you can’t walk up on, round straw roof huts, and few memorable quests. Galtrev even had a lot of quests about hauling boxes or wood, which isn’t exactly the most inspiring kind of fun to find in LOTRO.

At least the north eastern lake of Tâl Methedras was a nice diversion. It was a cozy town and lake, and the quests were slightly more inspired. The few mobs on the other side of the lake were all non-aggressive until I blew fire into their nostrils. I liked that this sub-region was this small. I reminded me of similar cozy sub-regions such as e.g. Moonglade in World of Warcraft. 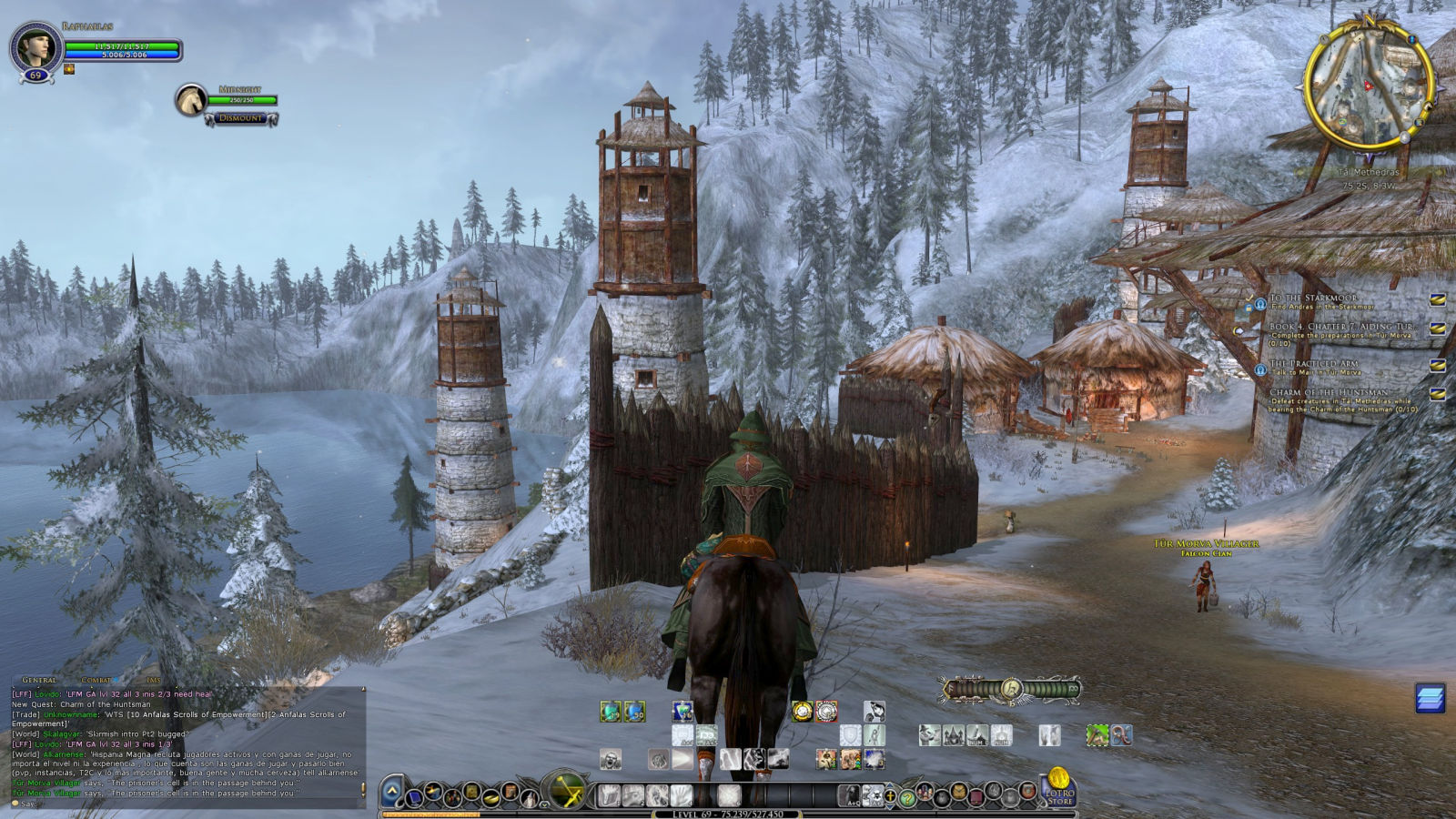 I got used to a good rotation with my fire spells, setting off a couple of damage-over-time spells and then the central channeling spell. Later, I found it useful to cap off with a lightning spell if the mob wasn’t dead by then, but it usually was. When I got pummeled by two or three mobs at once, I often had trouble coming up with the best area-of-effect rotation. It happened rarely so I was too lazy to figure it out yet.

Because I really never was in any danger – never died even once in Dunland.

Regarding the user interface, I later found a lot of joy in combining horizontal rows of bag slots. I decided to have two smaller bags for the stuff I needed to drag along, and a big one for all the new loot.

I also followed the recommendation of the best shop items by buying the premium wallet and the universal toolkit for crafting. The wallet was excellent. It could now hold all of the crazy barter items I had in my vault. It could have been nice with an automatic vault sucking procedure as soon as I had bought it though, instead of having to pull the barter items out of the vault, one by one. 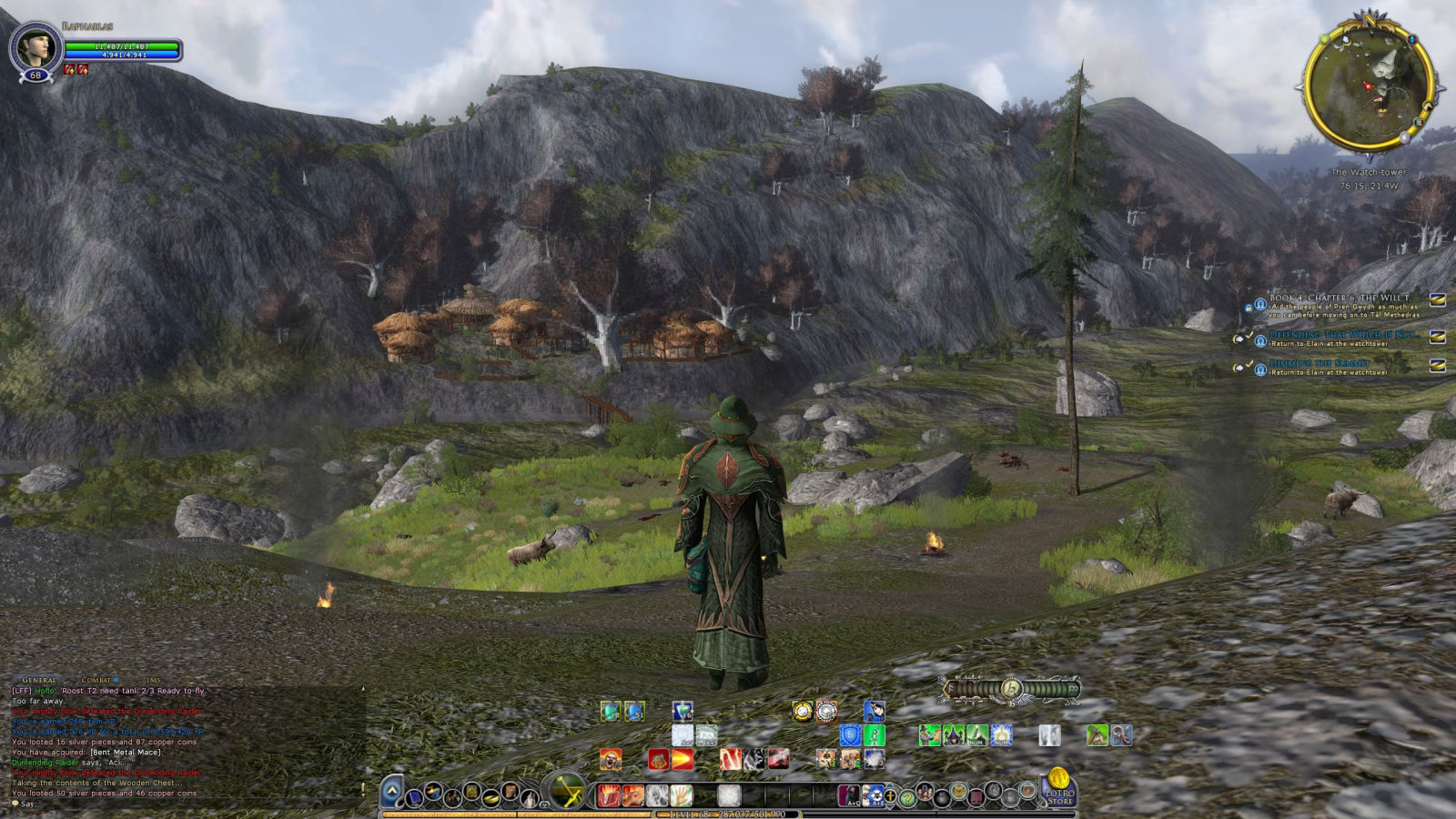 The universal toolkit was a disappointment, though. It gave a lot of critical boosts for crafting, but it turned out I already had a specialized item that was slightly better. But that’s the problem with shop items for LOTRO points – they often don’t show the juicy details until after you’ve bought the item.

I also had a few bugs along the way. After hauling heavy stuff, my character was typically locked in a T-pose that wouldn’t go away until I mounted up on my horse. I also had one crash to desktop.

It’s possible that those bug were related to playing the 64-bit version of LOTRO.

Finally, there were the five tasks a day. These could be picked up from a billboard in towns. It made a lot of the trash loot viable as ten items collected for a task, but they mainly existed to earn reputation with a faction along with a little bit of XP and IXP on the side. After doing them for a couple of days, I decided not to waste several rows of bag slots and instead sell them as trash loot again.

Oh look, they added fishing to LOTRO now, and as always its gameplay was stolen from World of Warcraft with only small differences in animation – such as visibly taking the fish off the hook after catching it.