So I finally took the big plunge and dived right back into Lord of the Rings Online again.

I’ve been thinking about doing it for so many years. The last time I played it was with my then level 65 Rune-Keeper in Enedwaith in 2011. Since then a ton of expansions and content has been added. I’ve had a lot of fun with LOTRO and I’ve been wondering if I could catch that oldskool MMORPG feeling again.

I had my doubts. Chances were that I would try it and then run away screaming.

Knowing how picky I had become with video games in general, this concern kept me at a distance for years. Sometimes I let the launcher update for hours and then logged in, rode around for ten minutes, visited a few nostalgic locations, then left again. This repeated itself all these years.

But then a couple of interesting things happened. The first was that the new spin-off developer, Standing Stone Games, updated the game client with a 64-bit version making it run a whole lot smoother. The other thing was that the developer made most of the content free until April 30 due to the coronavirus. That was the final straw for me and I decided to give it a proper try again this Easter.

As I logged in, I noticed that I had now accumulated almost 52000 LOTRO points. Is that a lot?

But good gugalamugala was there a lot of researching and setting up to do. I left the game in 2011 and the game have had a significant class trait overhaul in 2013 as the expansion for Helm’s Deep was launched. This affected a lot of things. I had an old document with a screenshot of my action bars and a thorough description of the rotation. That was now completely obsolete. Oh well – time to relearn.

The first surprise was that a system of traits had been implemented that looked conspicuously like the old talent trees in vanilla World of Warcraft. My first thought here was that the developer might have picked up the ball after Blizzard dumbed down the talents into the travesty it is today. Maybe this could lure some of the now pretty cross players over to LOTRO instead.

Not a bad idea. I might have done the same thing in their place. 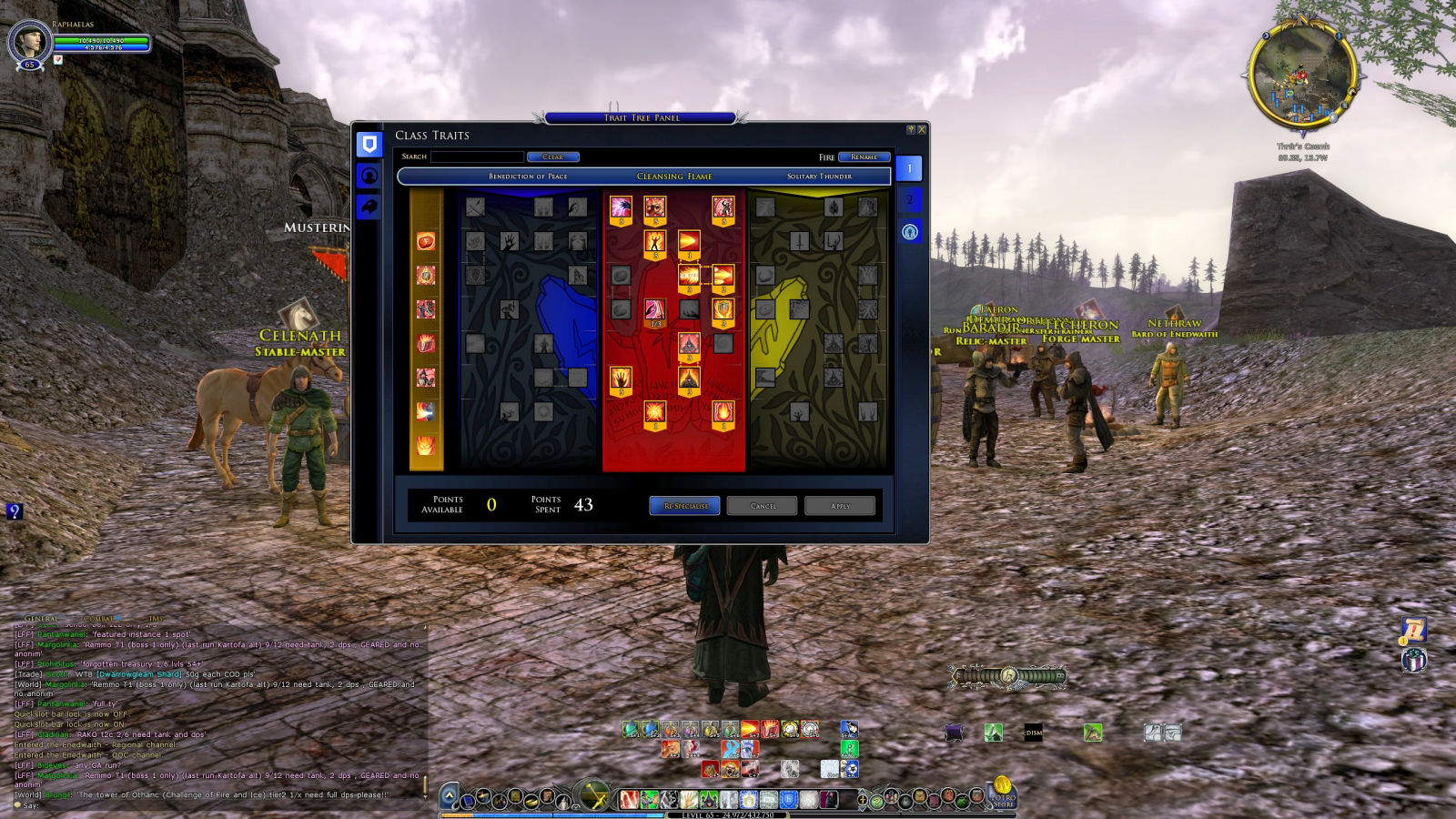 Actually I was happy to see the traits now in LOTRO. Nevertheless, I still looked up some forum threads and guides to show me how to place my points. Experienced players kept saying that the red fire line was now the way to go. Maximum damage. So I placed the points according to their reasoning.

I liked that the rune-stone was now a trait. Never really liked always having to put this down prior to a fight. I also wasn’t sad to see that the mark abilities were gone. Less setup, more dynamic gameplay. And I loved now having abilities against debuff and crowd control effects. Begone, potions.

Next up was rearranging my action bars. Only a few abilities from Enedwaith could be repeated. Mostly potions, gates and a few base abilities. I really had to research hard to grasp the fire spells and learn a good rotation for efficient damage. Actually, very sensible advice in forums recommended that I temporarily rolled a new character to learn it there for a bit, but I absolutely didn’t want to do that.

I wanted to continue with my rune-keeper and discover new land, period!

Although I spent a lot of time in LOTRO morning, afternoon and evening, I never got to see anything else than panels, settings, icons and abilities dragged around, reading forum tips and watching YouTube guides. A lot of gift crap had to be sold. Fireworks discarded. Visit the vault. Check out my legendary items.

This was actually another reason I often backed off all these years. I always thought the legendary items system in LOTRO was way too convoluted. Not that I couldn’t figure it out, it was just way too advanced and deep. Less could have been more here. It has a steep learning curve, a lot of hassle keeping it up (especially when farming) and the frequency of resetting all their points because of a typo fix in the next update. 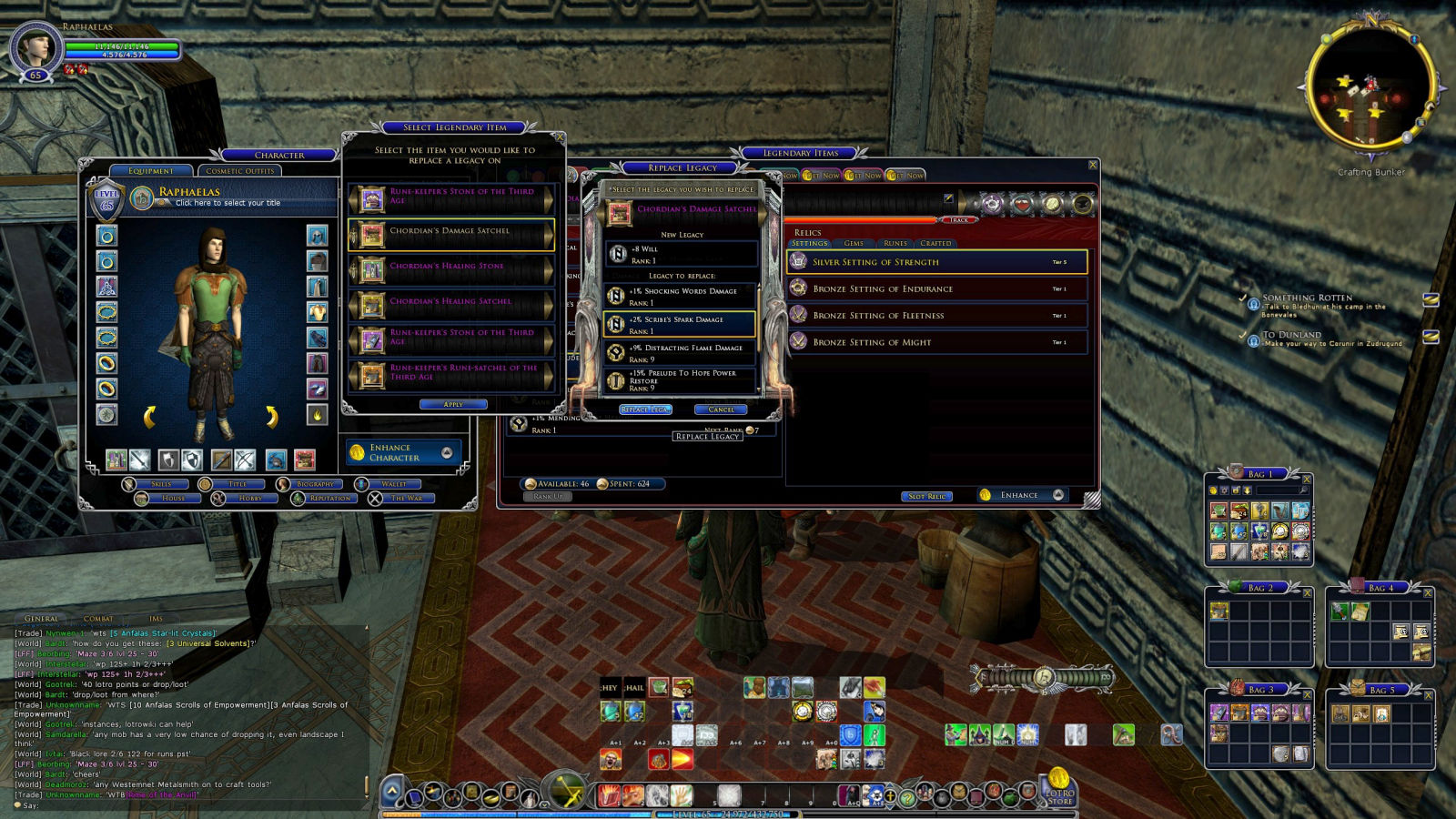 I actually looked up a few forums to see if I could skip them and just settle with standard equipment. Not recommended, the wise players said. Especially after level 100, the advantages of LI are way too great to ignore. It was a good thing the game had grabbed me so tight that I still wanted to press on.

I actually spent the rest of that evening watching an almost one hour long YouTube video about how the legendary items worked and how to farm them. It was a little disconcerting that I responded with a mix of “Ah, that’s right, that’s how it worked” and “Interesting, I didn’t even know that back then!” – it only once again shows how unnecessarily complex this system really is.

But eventually I got all of the above sorted, and the next day I gated to Enedwaith to start the preliminary quests leading into Dunland. One was in a library on a mountain and another in a village to the west.

I logged in during nighttime – another part of LOTRO that I’ve never been fond of. It’s too damn dark. I’ve always wished for a setting where I can decide it’s always daytime in this game. Another sore reminder was how mobs were sprayed all over the landscape. Salt and pepper at its worst. At least they reduced the horrible aggro radius after the Mirkwood expansion. Those were obnoxious times.

And what’s up with the amateur T-pose moment every time I enter a new instance? Why is that still there?

Among the good things, I absolutely loved how the auto loot option didn’t even require me to click anything at all. After an enemy died, I just automatically procured all of its stuff. Beautiful.

And then the game did that one thing I also don’t like about MMORPG – having to play a surrogate. 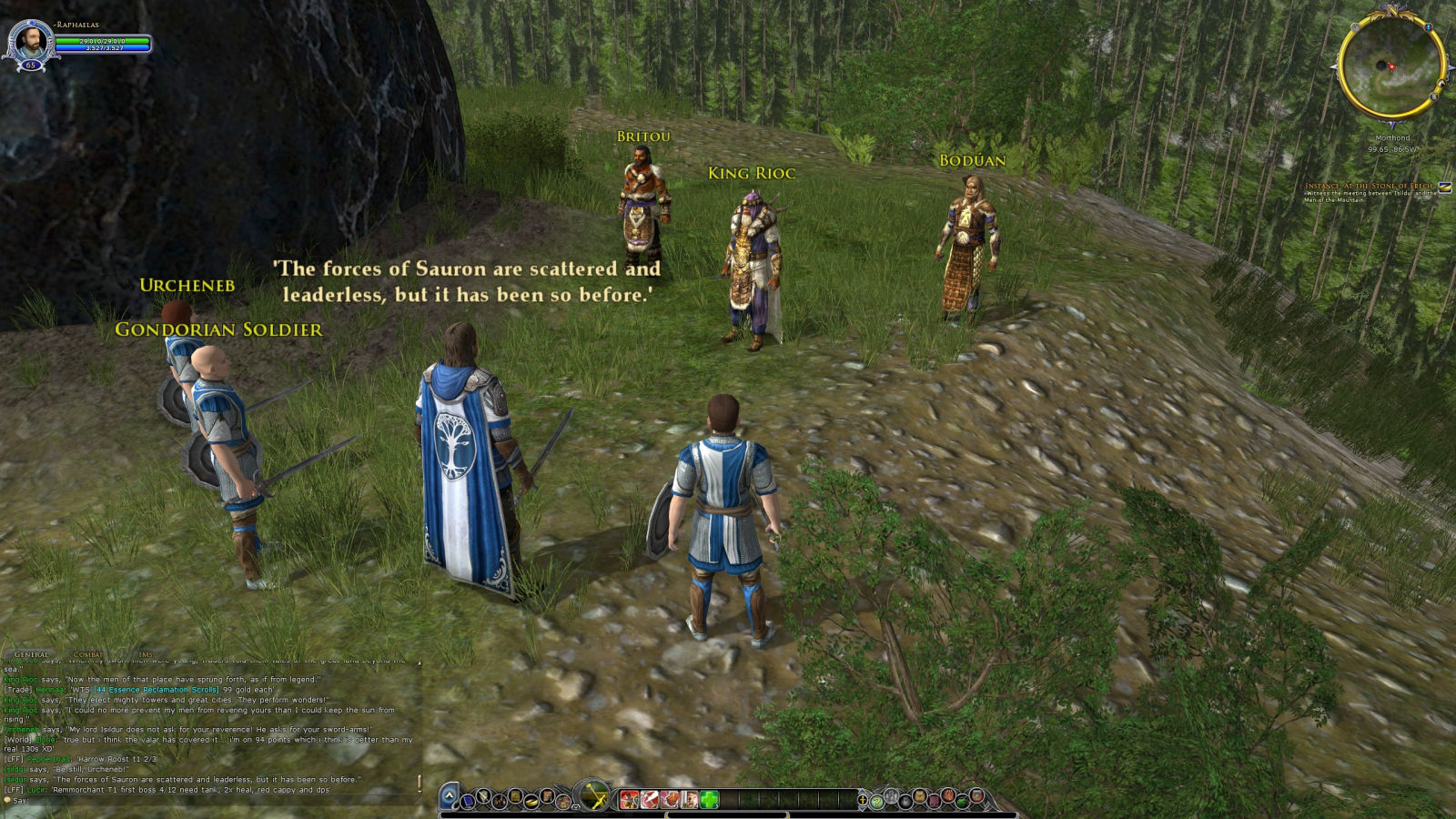 An epic quest switched to a session play where I had to play a soldier with a sword. It began a story from long ago about Isildur making one King Rioc swear an oath to fight Sauron. Then Isildur and a couple of his own minions – me included – stormed an orc fort. We fought many waves of orcs and big trolls and learned that Sauron was back. Back at the hill, King Rioc approached again and proclaimed that we were nothing compared to Sauron. Isildur then cursed the king, making the sky all dark.

Am I right if I guess King Rioc and his men were those undead mountain ghosts in the third movie?

While I’ve never been a fan of temporarily switching to a different character with a unique set of abilities – I especially hated that in World of Warcraft – it actually wasn’t too bad this time around. The soldier had four easily understood sword abilities and one heal, and although the fights got more dense the further we got into the fort, it was never really difficult. I barely had to use the heal a rare once in a while.

Fighting with my own character, a level 65 rune-keeper, was all right. Never had trouble keeping my morale up (which is the health in LOTRO) and the fire abilities were a mix of damage-over-time and direct hits. Lots of fiery effects. Two or three abilities and a channel and a standard even con mob was dead. But it also felt dumbed down somehow. I now only had half a dozen fire spells and it was almost too much of a good thing compared to Mirkwood and Enedwaith with rune-stones and markings to take care of too.

I guess I should have been careful what I wished for.

Finally two of the epic quests led down past the south border of Enedwaith, just barely touching Bonevales in Dunland. I acknowledged the quests steps of the two guys there and logged out for the day.