This is another post in my series about the odd games that I would normally discard, but which I have decided to at least try out for up to an hour. It may have been free games, games given to me by a friend that had several keys of the same game to give away, or games that for other reasons just kind of popped up in e.g. my Steam library without me knowing how they ever got there in the first place.

This was a third person platform collect items game for small kids, no doubt about it. Just look at those jolly round corners and the bright colors on everything. As a walking stub – the son of an old tree yearning for water – I had to collect tears in levels accessed by activating a world globe in my small hut. Completing the level by collecting a certain number of tears spawned more world globes in my hut. 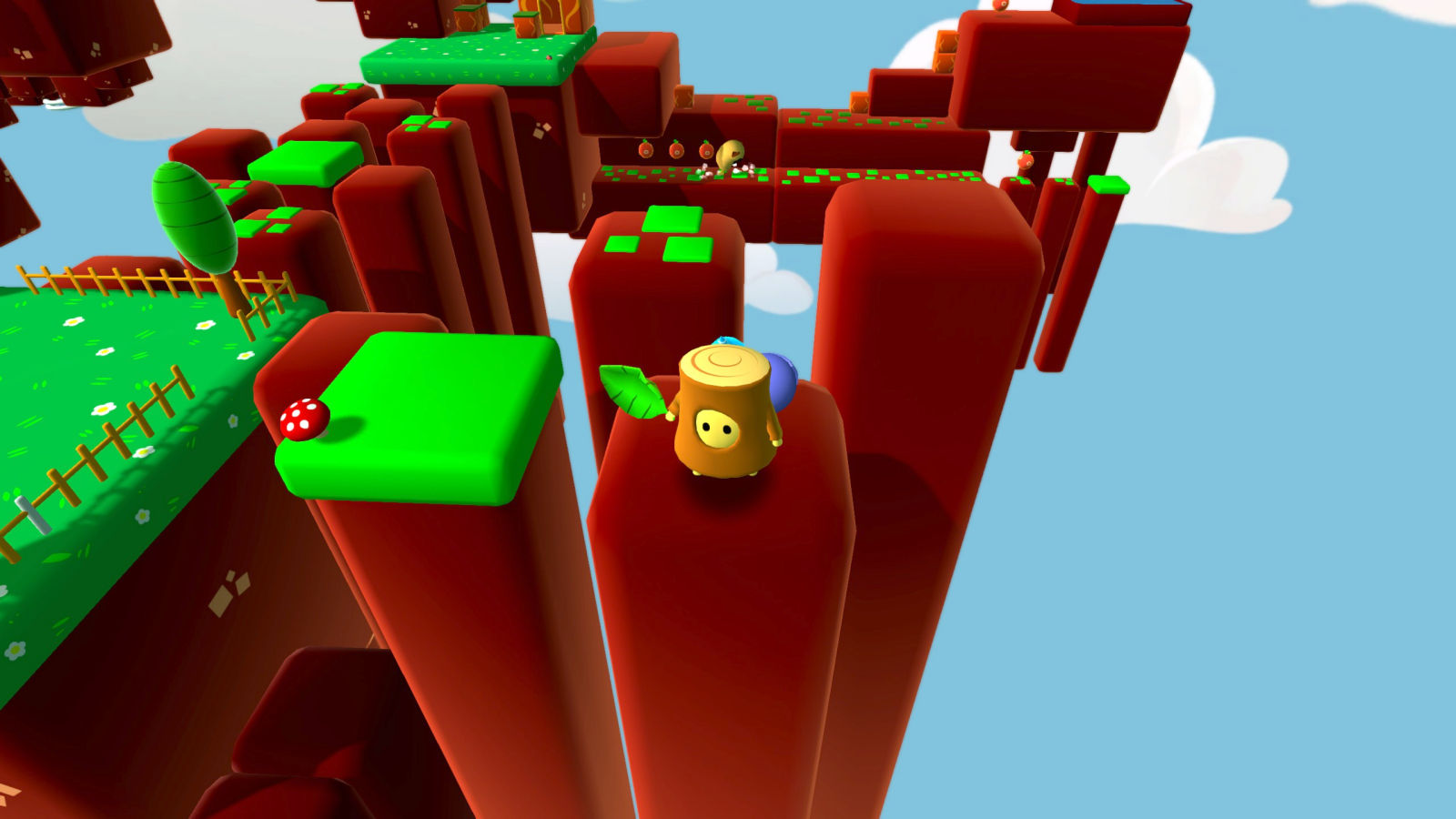 Each level was a range of platforms out of grass, house roofs, trunks, etc. Often dominated by poles, the look and arrangement of these levels reminded me of Refunct. Tons of apples could be munched up, a rare tear collected, and slowly moving monsters could be bashed out of existence with the smack of a leaf. If it got me first, death sent me to the beginning or a later checkpoint.

Movement was by using direction keys. I could use the mouse to zoom in and out but it really didn’t work that well. Sometimes the camera hit its back against a wall and I had to imagine where I was going.

Hitting the escape key immediately brought me to the desktop. No menu, no question, no nothing.

This was designated as being a hidden object adventure game. I’ve played a couple of these before, and they can actually be a great way to kill time. I was afraid this one would grab me and ascend from just being a short session game to having its own blog post. And it did indeed grab me to some extent – I played a full hour of it and I only really left because I got stuck. I thought that should be my cue.

But the funny thing is, it wasn’t really a hidden object adventure. 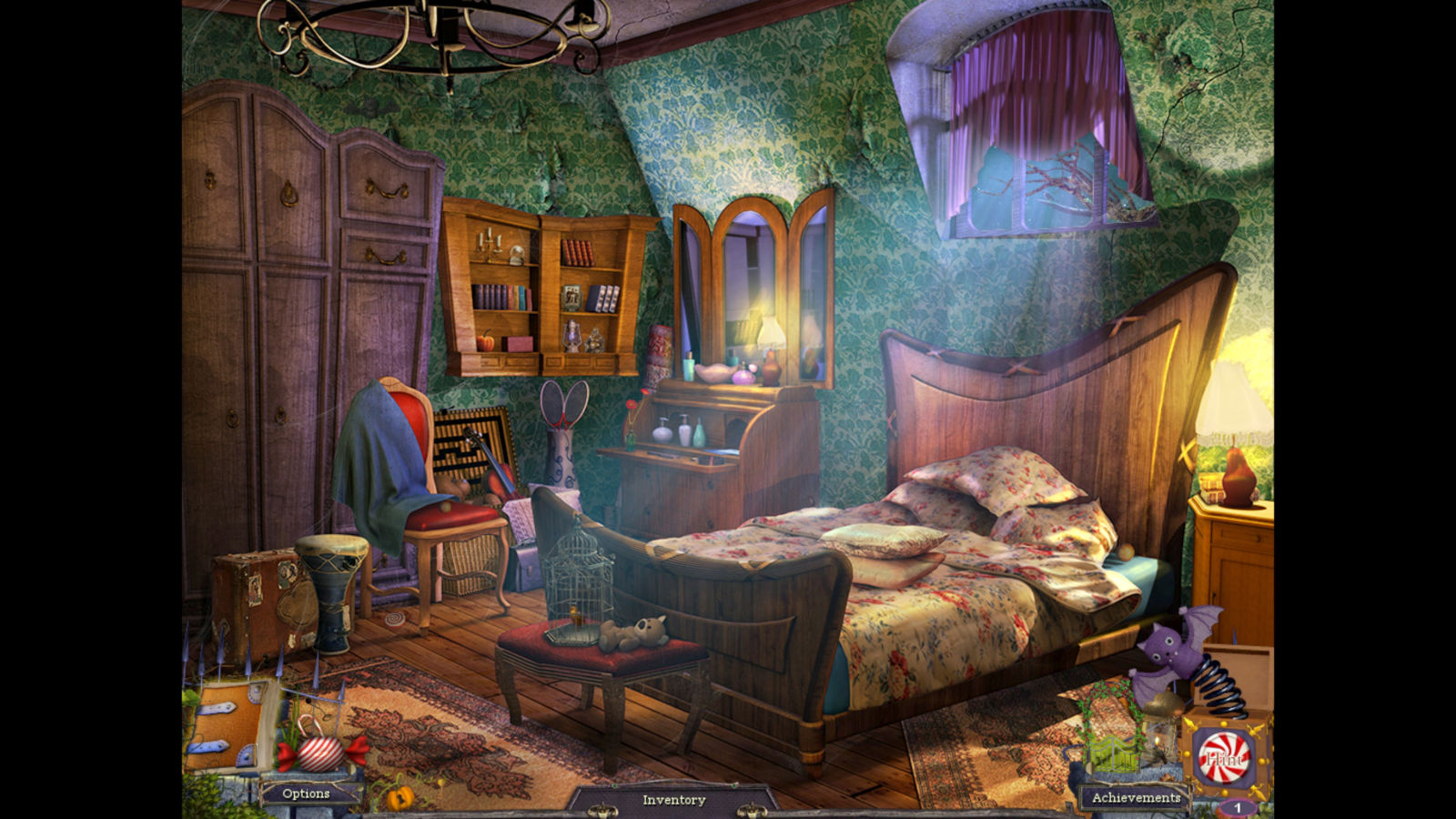 The game still used the hidden object model of static locations with very busy backgrounds. I had to find some things, use inventory items, some items could be zoomed up and manipulated, objects moved aside, drawers opened and looked through, etc. It was point-and-click from a first person perspective.

Some points of interest zoomed up a minigame with parts missing. Adding the missing parts started the minigame. It could be e.g. a slider puzzle, shifting letters around in three wooden blocks, etc. 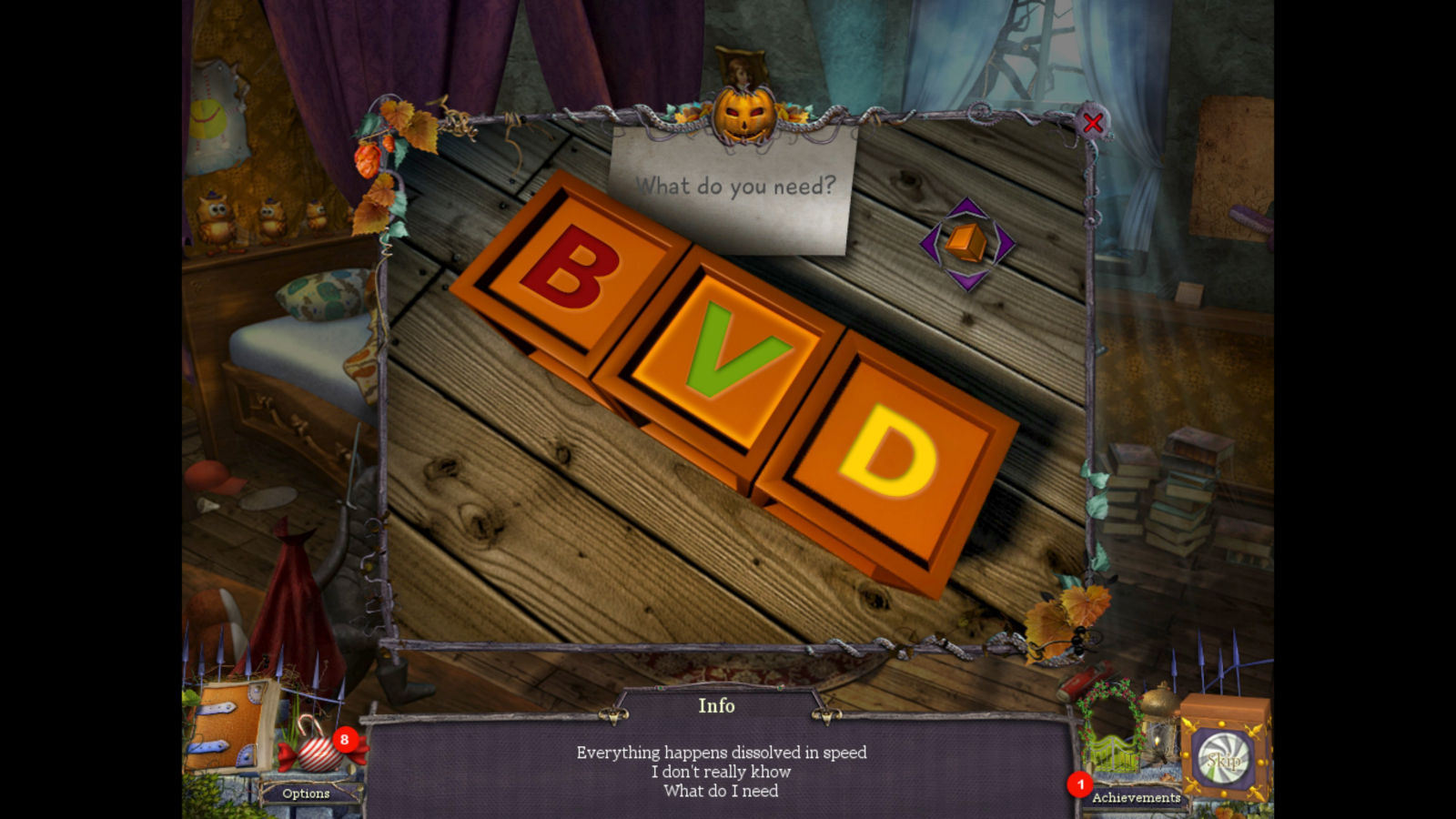 There was sort of a notebook to check out for clues, a shop to buy decoration using candy found here and there, and a separate location showing the achievements I earned. There was even a quest with an owl I had to find outside and talk to. There was a spooky atmosphere given the title of the game.

As mentioned the game was quite reasonable for what it was trying to be, but I did miss the hidden object part only available on the easier difficulty level. If I had to criticize something, it was the obvious abundance of typos in various sentences and the amateur voice acting.

A futuristic runner set in an enormous version of the Star Trek holodeck. As a coiled up robot rolling down chutes and platforms collecting coins and avoiding obstacles, I only had two buttons at my disposal for steering left and right. That’s it. Everything was done by momentum, and there were turbo gems and big jump gaps to spice things up. There was also a level with a confusing overload of teleporting gates. 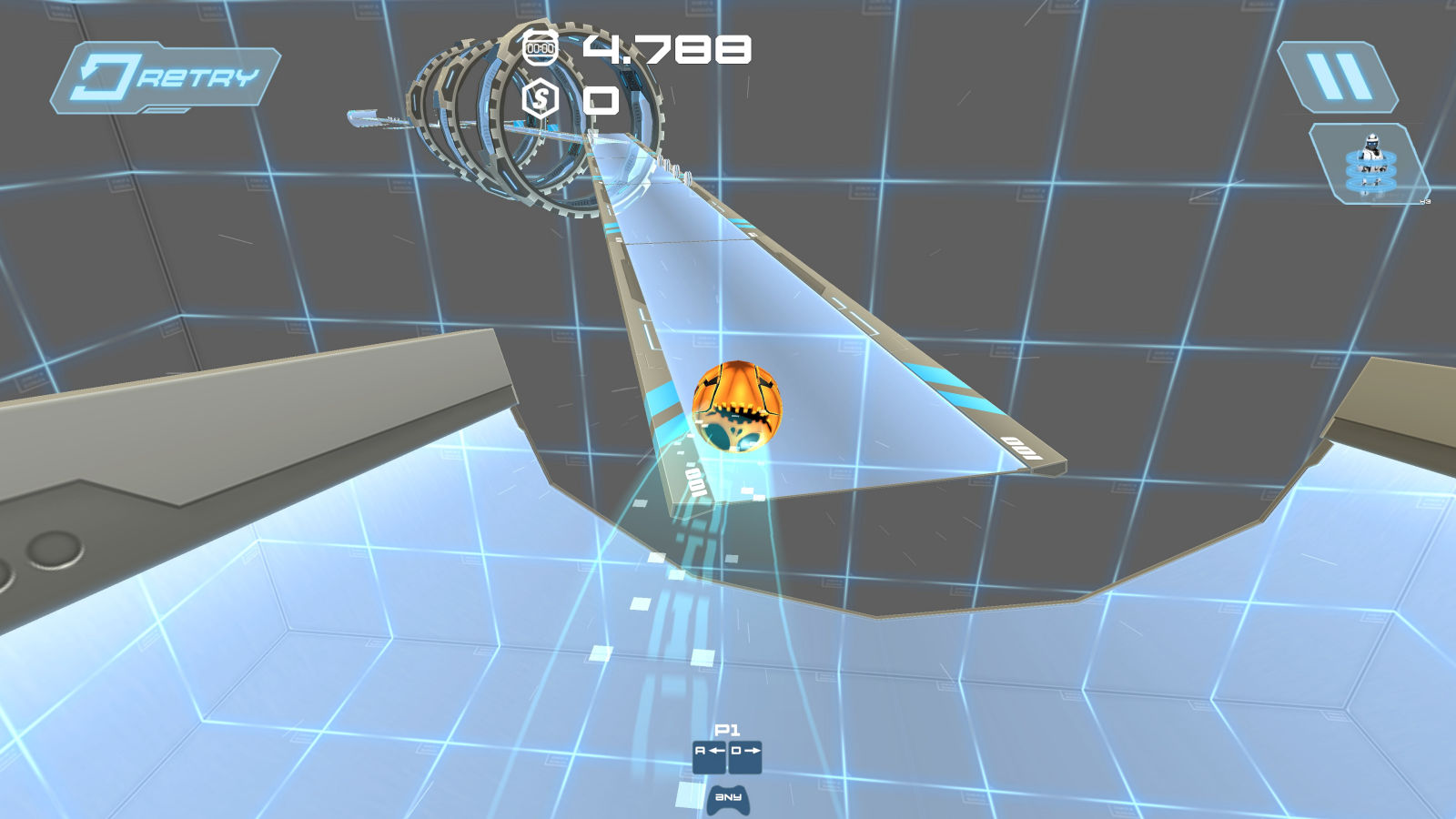 The game could also be played in multiplayer mode and there was of course a focus on statistics on time and collecting items. It had a modern soundtrack with synth drums and a screen-wide three seconds countdown after tumbling off a track. It was quite recurring.

I’ve never been particularly fond of runner games. It’s too much of a one-trick pony for my liking, and also steers in the direction of racing games which is not really my thing either. Next game, please.

Quite an ingenious puzzle game that needed some time to grab me. Not too surprising it was confusing at first – lots of lines and symbols and a bad first-hand impression by a tutorial video switching to a web browser for showing a YouTube video. But ironically, the in-game text tutorials accompanying the actual puzzles did a much better job at making me understand the gameplay than this video did.

Basically, the game was actually sort of an assembly line puzzle game. Arrange various action icons, set up directions, then hit a play button and see if stuff loops around causing the wanted effects. Here, the action icons could spawn and grab an atom to slide it on the lines, perform actions such as syncing and bonding with other atoms, then drop and output them in the designated area. 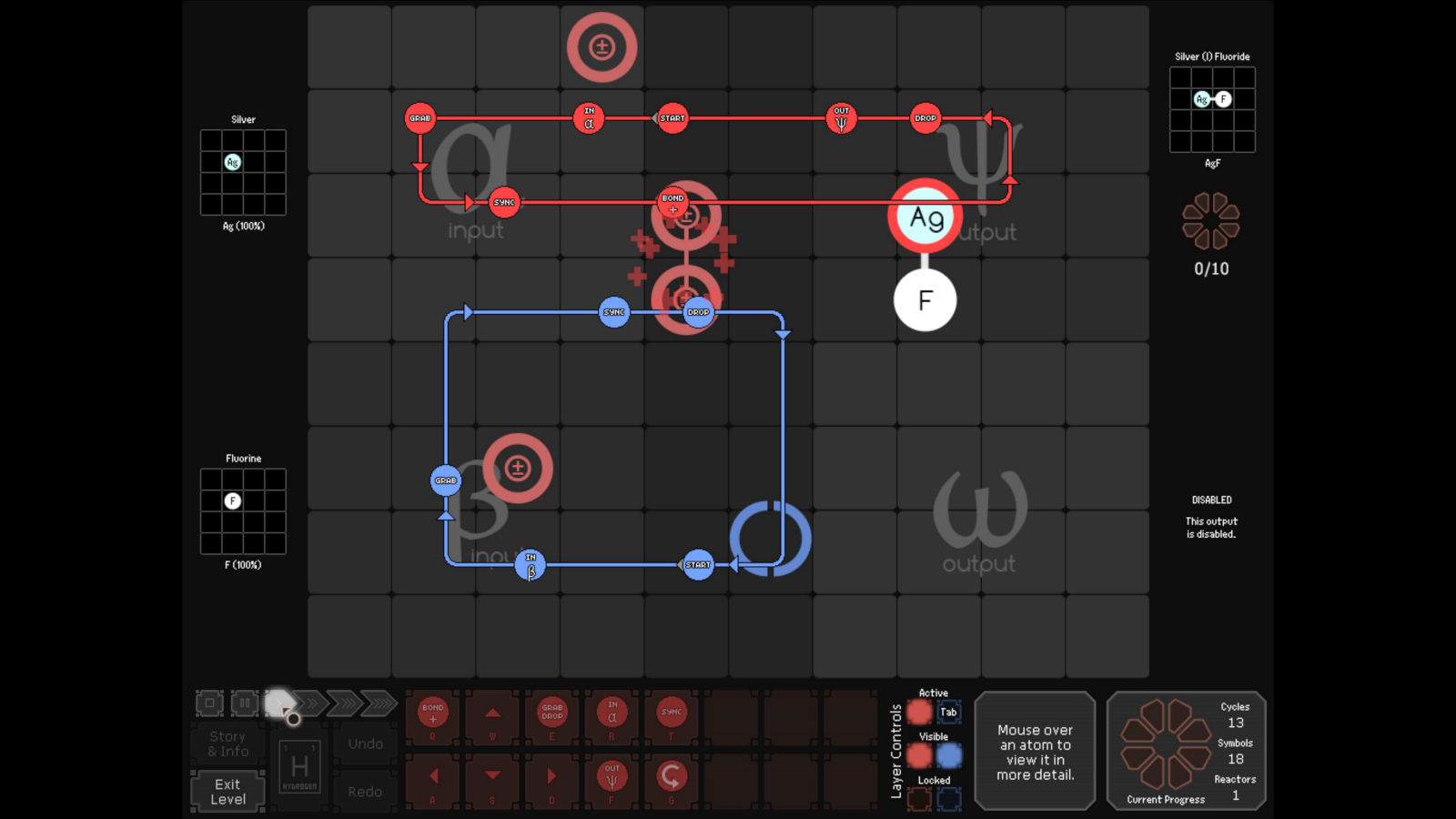 The drag-and-drop icons in the bottom and the right-click menus gave it a taste of designing and even programming, and the play buttons had several fast forwarding speeds. Typically a certain amount of atoms or molecules had to be output for a puzzle to be successful.

Sound effects were good while the music felt like turning on Spotify for some completely unrelated music. I was thinking that perhaps the music could have changed pace as I stopped and started the puzzles?

The fifth and last game this time around was a side-scrolling resource management game. The big retro pixels, the parallax scrolling, and the deer in the beginning reminded me lot of The Deer God.

This was quite a different beast, however. I was in control of a king on a horse, picking up coins and spending them on places to fortify and enrich my domain. Hire minions, buy them a bow or a hammer, make them build walls, huts and shoot animals for more coins, raise some walls to defend against greeds, and so forth. If you’re familiar with these type of games, you know the drill. 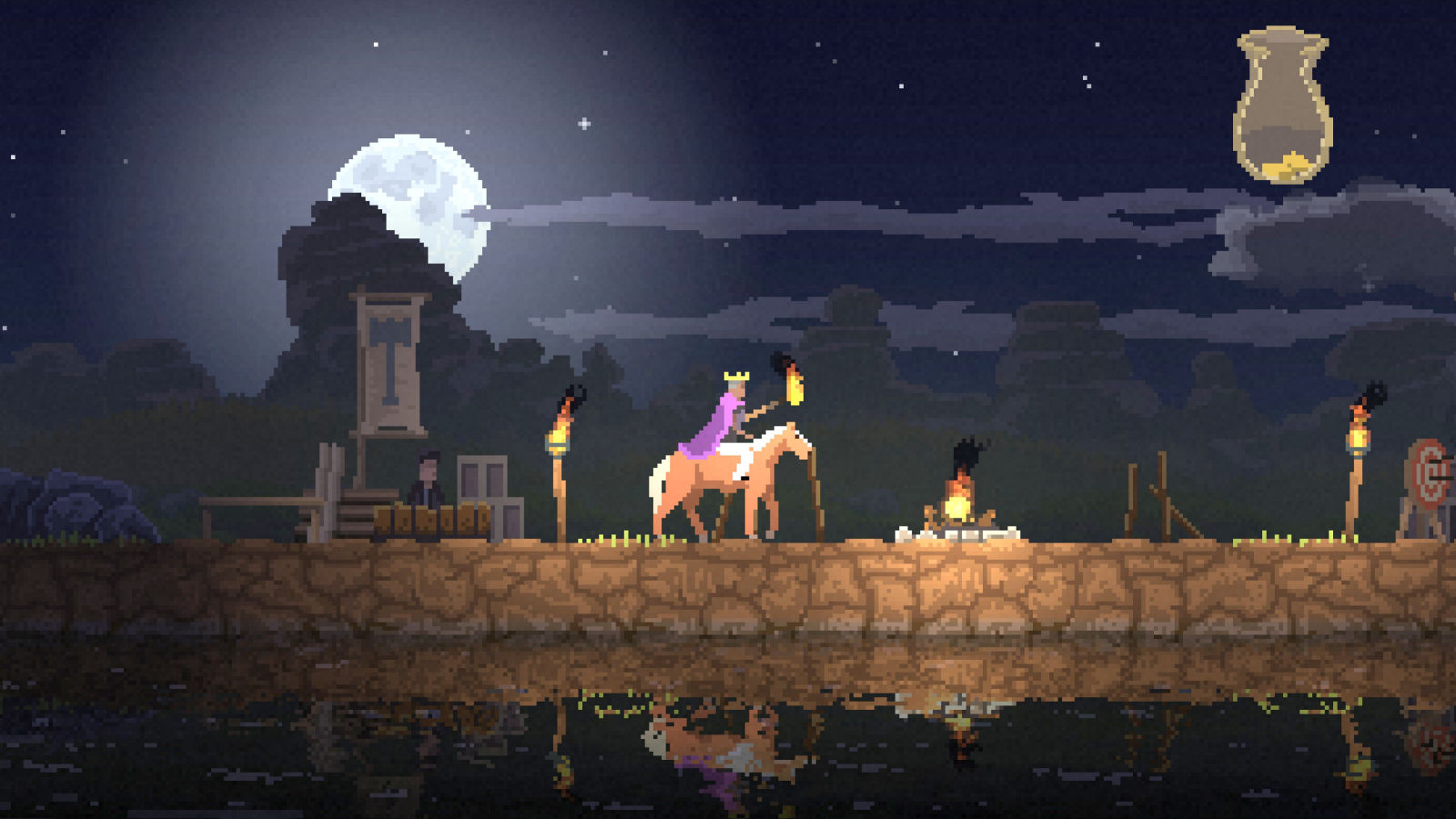 The controls were simple. Apart from moving left and right, I merely had to hold a key to pour coins into placeholders. To find minions to do work for me, I had to ride a bit right and drop coins for them to join my cause. But not too far. If a greed got close and ran off with my crown, it was game over.

While certainly a charming game, I’m not really compatible with permadeath.