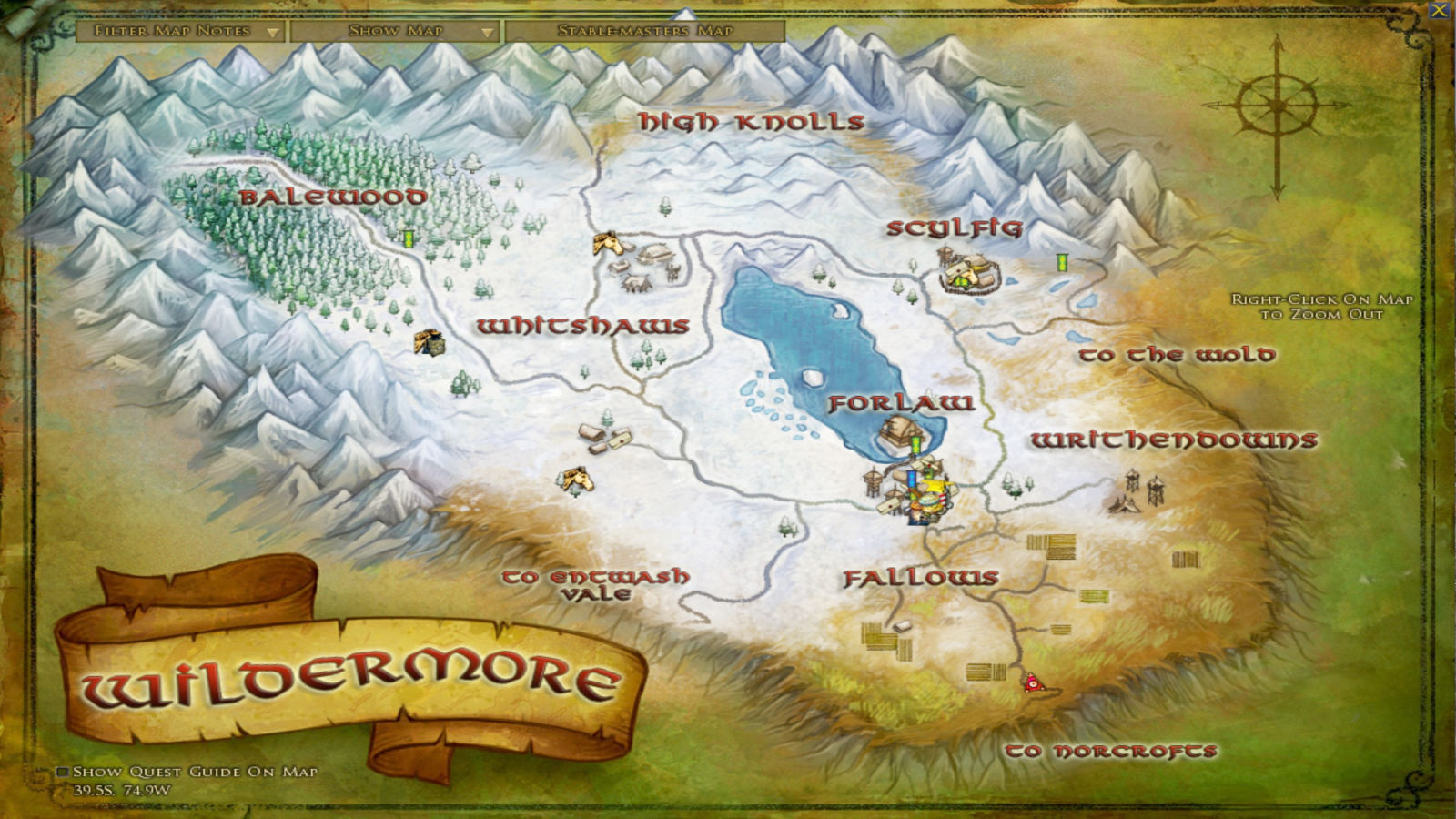 Suddenly the town was attacked and the screen got all frosty. The tall ice giant Núrzum stomped through everything, killing and smashing as he went by. He was solely responsible for the cold temperatures in the entire region. Big ice crystals grew around him. It was clear this was a raid caliber boss with more than two million morale. Nevertheless, Thrymm took it upon him to face him.

Núrzum merely picked up Thrymm with ease and threw him miles away. 😮 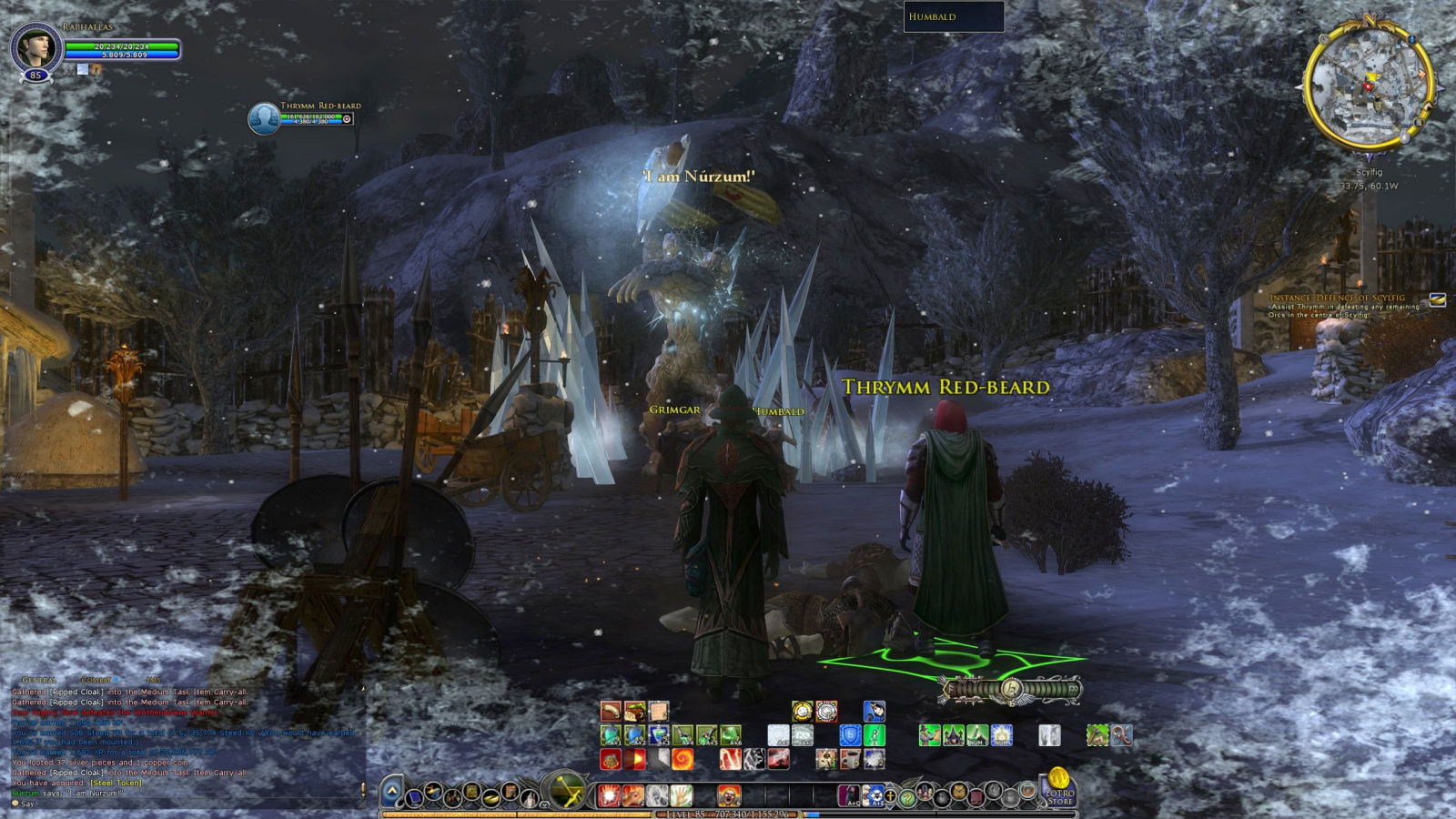 The aftermath of the town was an impressive sight. Ice crystals everywhere. After the usual quests about cleaning up the place, Thrymm’s daughter Cyneberg and I rode to the capital settlement Forlaw. It was big and even had the mead hall on a northern cliff only accessible by a small bridge.

But in spite of the frosty theme and a better variety of mobs such as barghests, wolves, cattle, moose, snow cats and grims, orcs were still quite prevalent in this region as well and of course I had a lot of quests about reducing their numbers and messing with their stuff. I even had to find farmers down south and help them defend against orc riders. And as always, I refused all mounted combat, killing them on foot.

However, the most hateful mob type in this region was clearly the grim.

Grims were floating lights of ice and looked like they had been imported from the Wrath of the Lich King expansion in World of Warcraft. For some reason their spells did colossal damage on my rune-keeper. Even if I hurried up killing it and healed myself up, it wasn’t uncommon that I had less than 30% morale left after the grim was done for. Either it was tuned too aggressively or I was missing some kind of resistance. 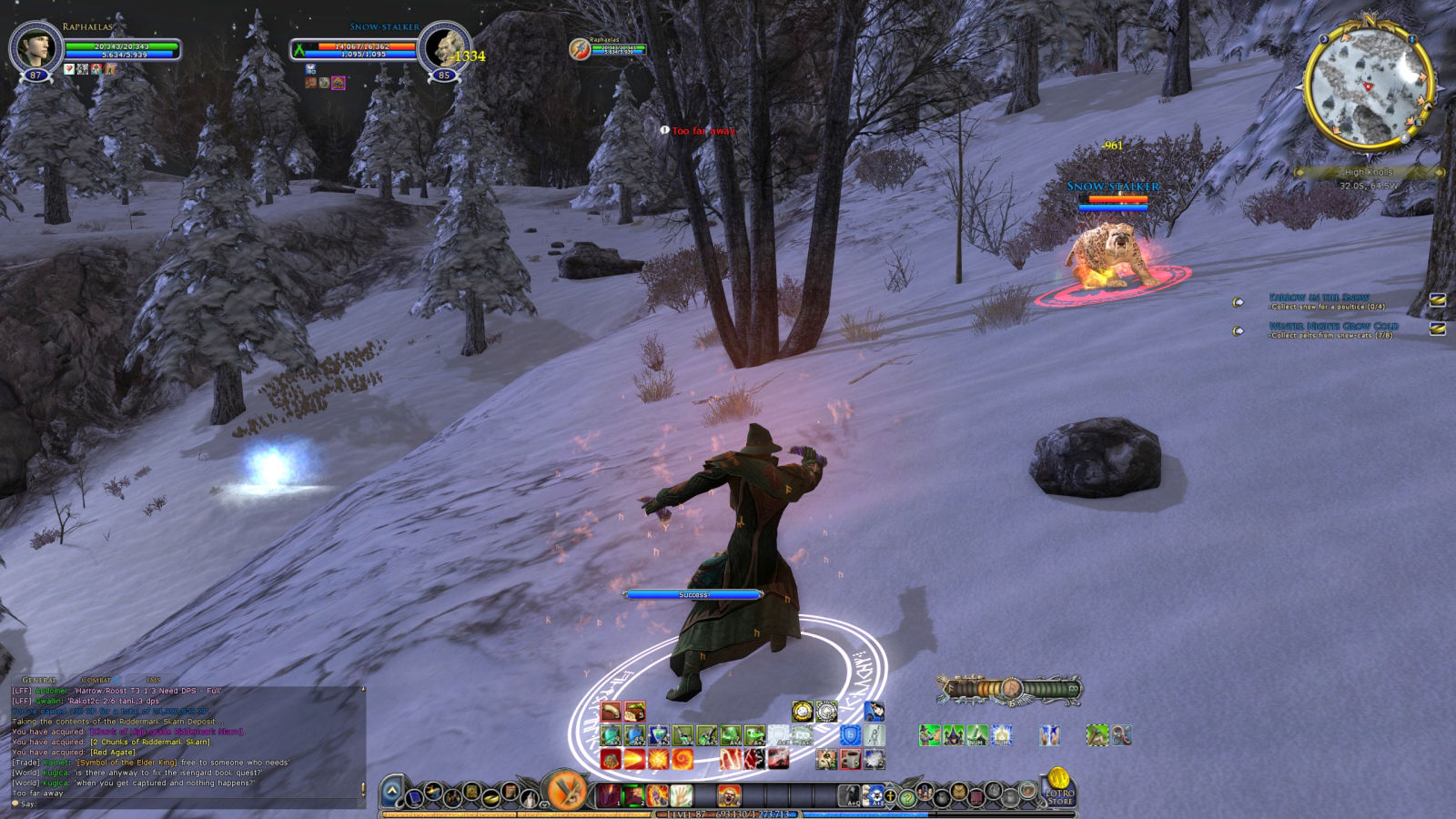 Wildermore also had its own forest Balewood in the north west area, with new mobs such as huorns and wood trolls along with the always ubiquitous orcs. I found an impressive amount of quests here.

An introductory meeting with a powerful orc boss was cut short by it getting pummeled by an elite huorn, but he continued to create havoc from an orc camp in the far north west corner. The orc boss finally met its demise when I later returned with a cluster of ents, for whom I had done a lot of quests in between.

Most of the the quests in Balewood were menial in nature, but it wasn’t really that enjoyable since a lot of them were distanced far apart. Although Balewood was nowhere near as dark and eerie as Fangorn – in fact, it was mostly bright and snowy – it was even more dense. Trees, branches and foliage was all over the place and made it very easy for mobs to hide and surprise. And this was even further exacerbated by steep cliffs that I frequently had to circle around. The only road through the forest also had orcs on it. 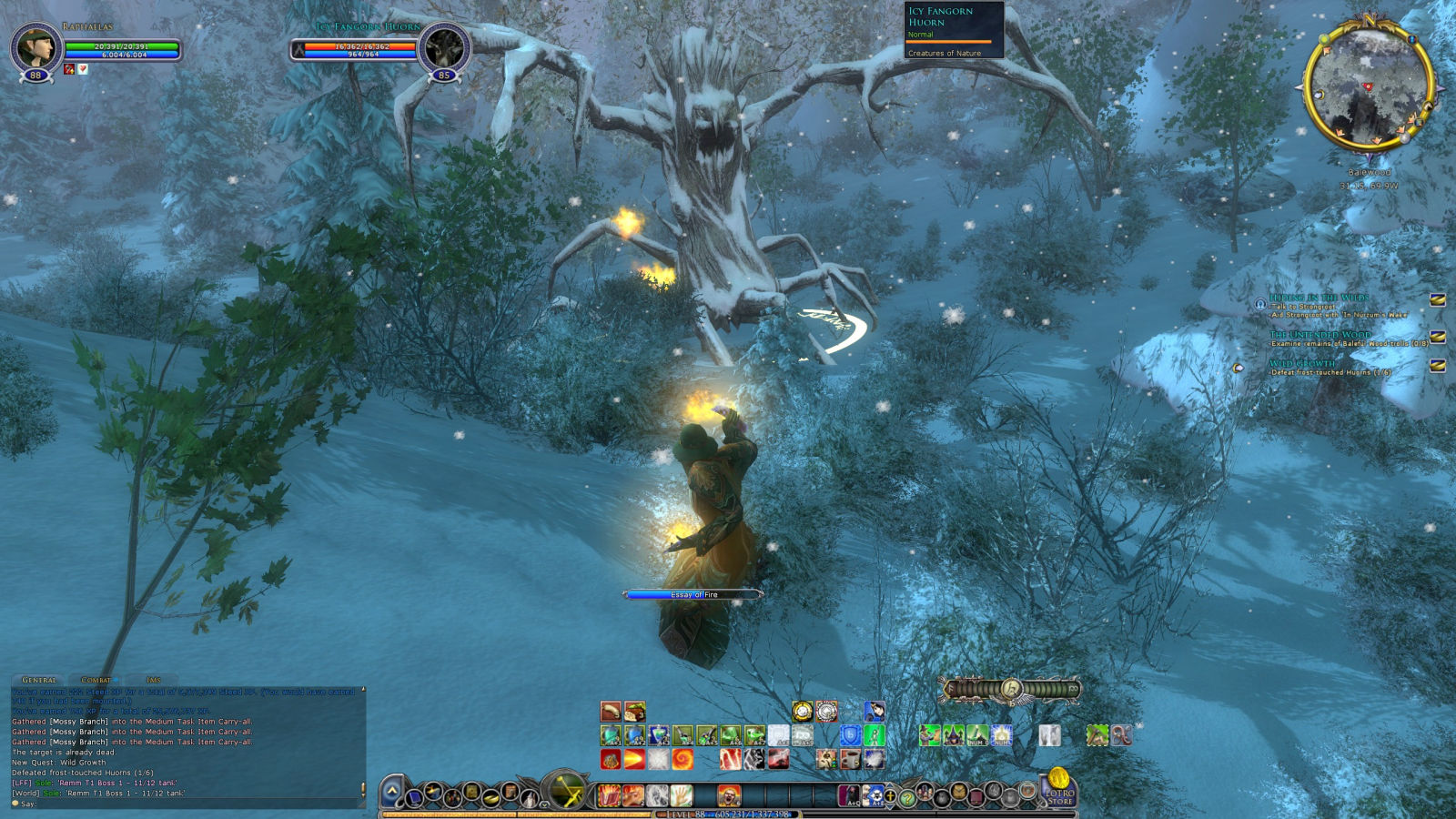 Probably the most memorable quest – a mixed blessing – was the one where I had an ent following me around to study how the presence of the orcs had affected Balewood. This peaked by a frozen waterfall where the ent wanted me to glance at fallen branches further up. Again the steep cliffs forced me to circle the long way around, but even though I spent a lot of time visiting all pinnacles, killing a billion wood trolls and huorns on the way, I couldn’t find the spot where the game told me to have a look now. I even dropped down to a ledge where I managed to walk up and stand right on top of those damn branches.

I spent so much time retracing my steps that I found two bear carpets with a black rabbit on their heads.

Only when I finally restarted and went more to the left of the cliff and up on a ledge there did I find the spot where the game told me to have a look now. Come on, developers. Seriously. Would it have hurt anyone to have multiple viable look spots, including right on top of the branches? 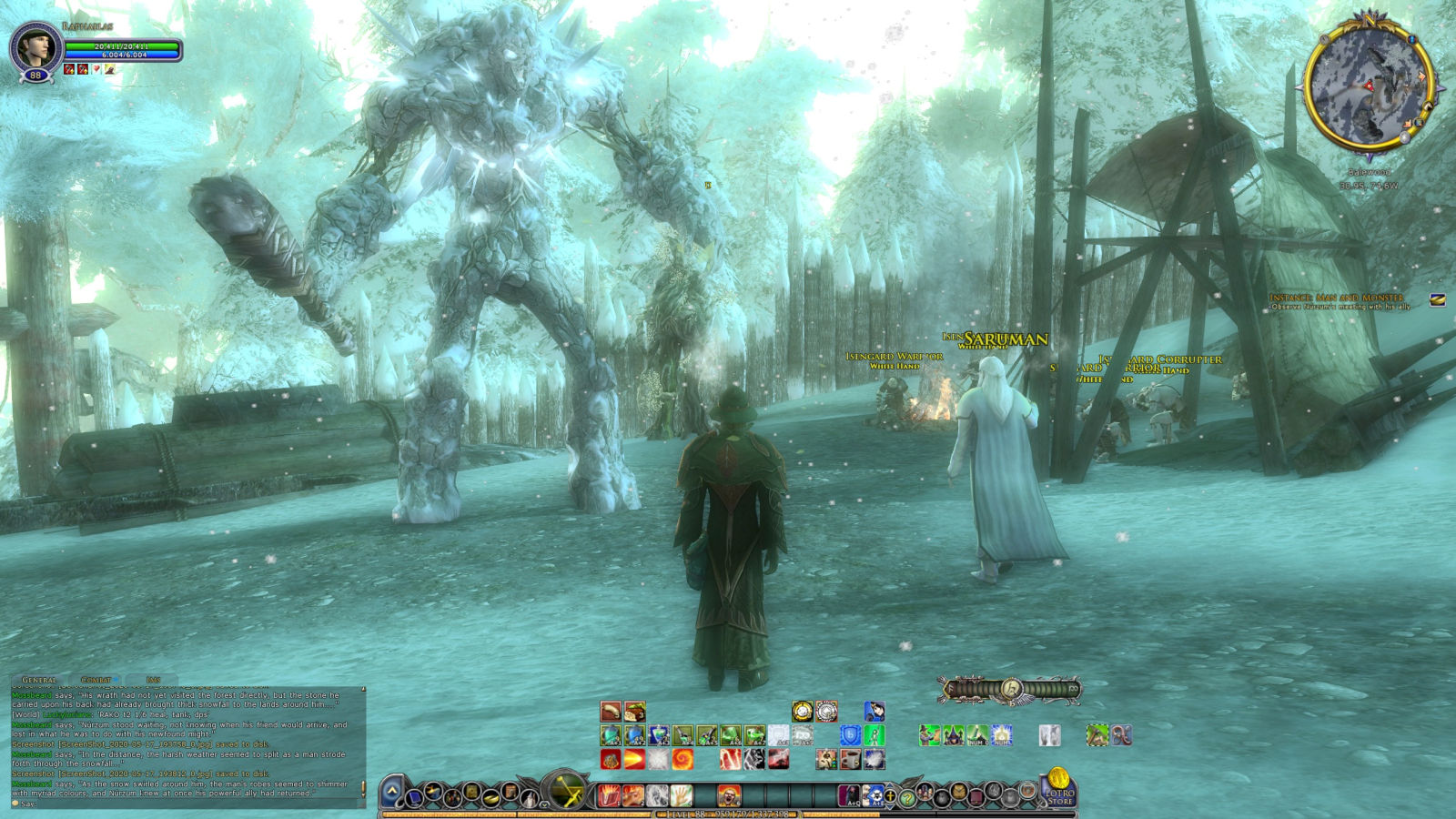 Luckily that vexing quest was excused by an unexpected session play quest where I was in control of the ice giant Núrzum himself. The ent brought me back in time to watch a meeting between Núrzum accepting kill orders from Saruman. Then I steered the giant down the road from the orc camp. A ton of wood trolls and huorns attacked, in bigger and bigger waves. I had a dozen of everything on me in the last battle.

But although Núrzum only had three attack spells with a considerable cooldown on each, it didn’t make any difference. Even in that last battle, they only managed to move 3-4 pixels of morale. 😮

My rune-keeper also want to have two million morale. God mode for the win.

I liked the ending of the story in Wildermore too. I went to a lonely pinnacle in the north east corner of the region and found a few derelict huts. Some orc bodies were strewn about. Cyneberg was standing by a fire and was devastated. She had looked all over Wildermore for her father, Thrymm, to no avail. Now, she finally had to admit defeat. Núrzum had won. Saruman had won. It was all over. 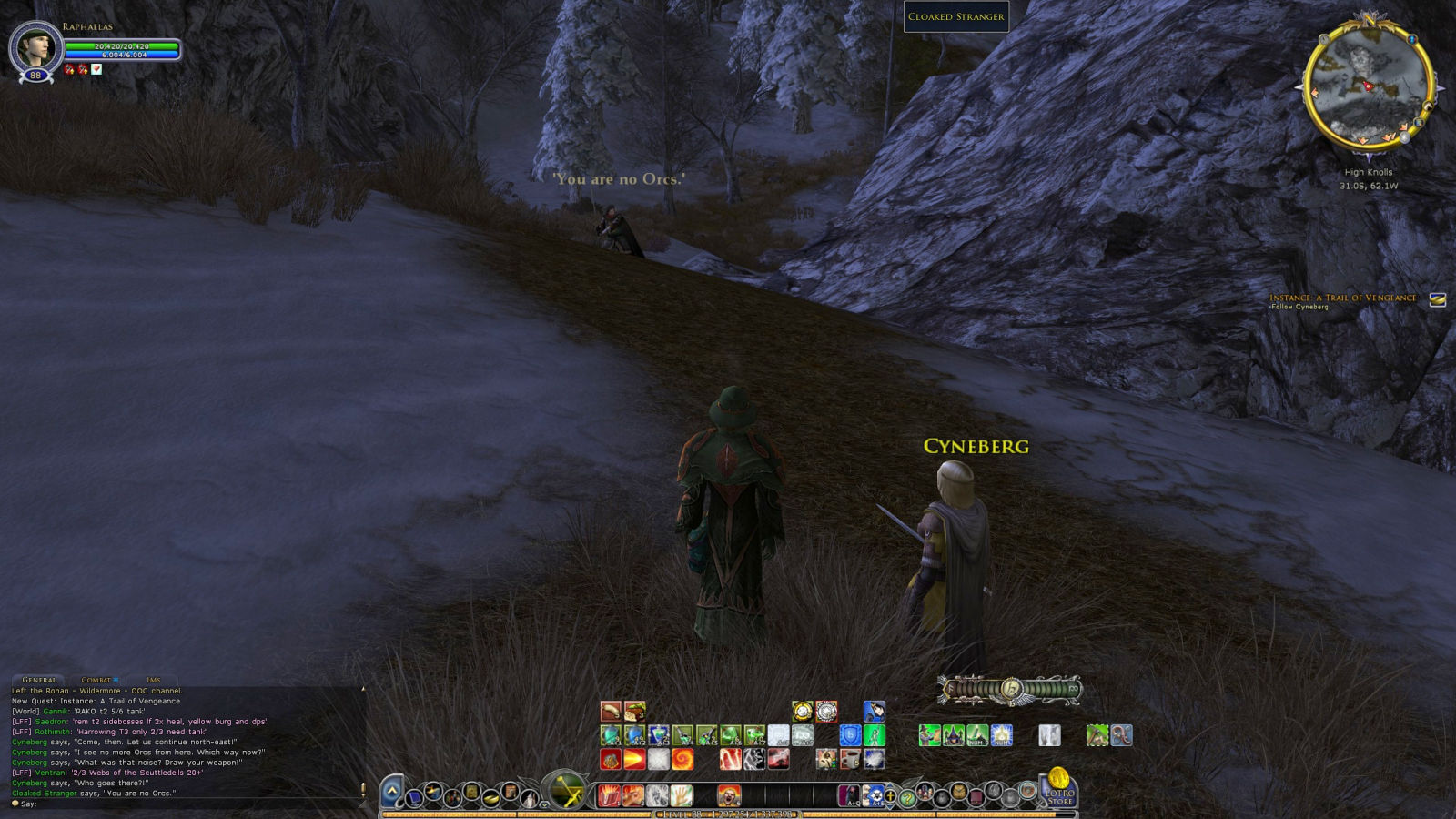 We then started walking away together, but just a stretch down a snowy hillside we found a cluster of dead orcs. What was that about? Who had killed them? We found more dead groups of orcs later on. And more. Then suddenly, a human shape appeared in the distance, muttering the words that we weren’t orcs. As he got closer, we could see it was Thrymm. Cyneberg was so surprised, she fainted on the spot.

I actually thought that was very cute. An understandable reaction.

After a small talk by a fire about how we could attack Núrzum, Cyneberg got the idea that a horn could be used to weaken him. Soon a session play occurred where the three most powerful men in the region stood face to face with Núrzum in an icy arena – Thrymm, Cyneberg and Gárwig. Each had more than 160K of morale. Since I only had a measly 20K, I was given the task of blowing the horn three times during the battle. Unfortunately a few grims spawned in between. Yes, the ones that could eat several centimeters of my morale each time. If only it had been something else. Luckily I was on my toes and survived. After my three blows in the horn, Núrzum was finally killed by an overgrowth of ice crystals rising up from below. 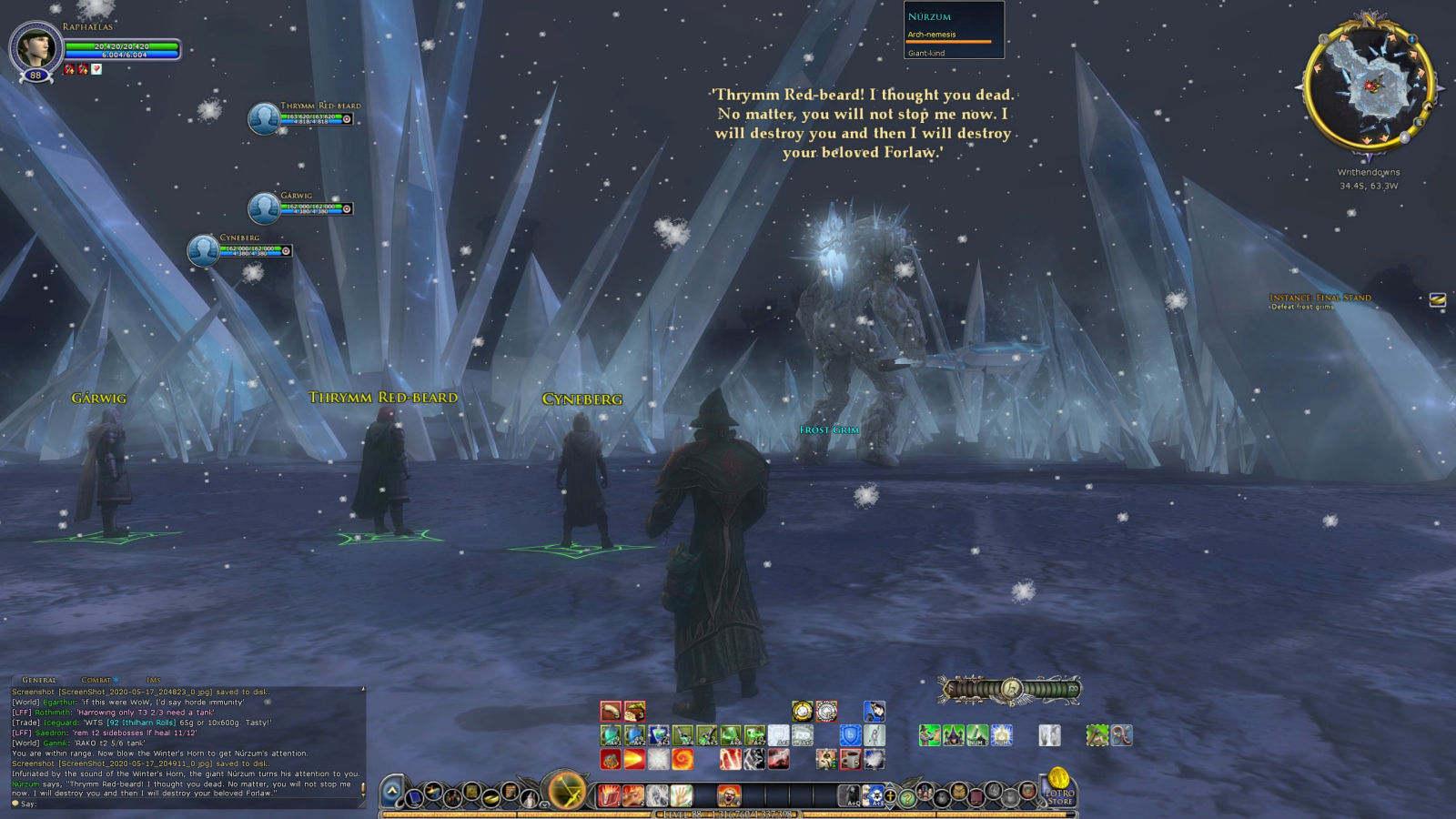 And that, ladies and gentlemen, was the end of the story in Wildermore.

I must confess that even in spite of the different theme and the solid story, I was starting to get a little tired of LOTRO. Too many human settlements, too much going from mead hall to mead hall for the next chain of quests, the strange jumble of background music quality (either real instruments or spurious MIDI trash), the archaic graphics and clipping of yesteryear, and the frequent bugs.

At one point I had to find three goats for an NPC in a cave. I found them, one by one, and then they started following me around. As I entered the cave, the goats were parked by themselves inside and I finished the quest. But outside of the cave, the nitwitted goats were still following me around! I now had new quests for picking up stuff in a settlement taken over by orcs. Having those goats around while avoiding orcs was odd. And then as I entered the cave again, I saw the three parked goats again yet I also still had the three other goats following me around. I had to restart the game to get rid of those pesky goats. 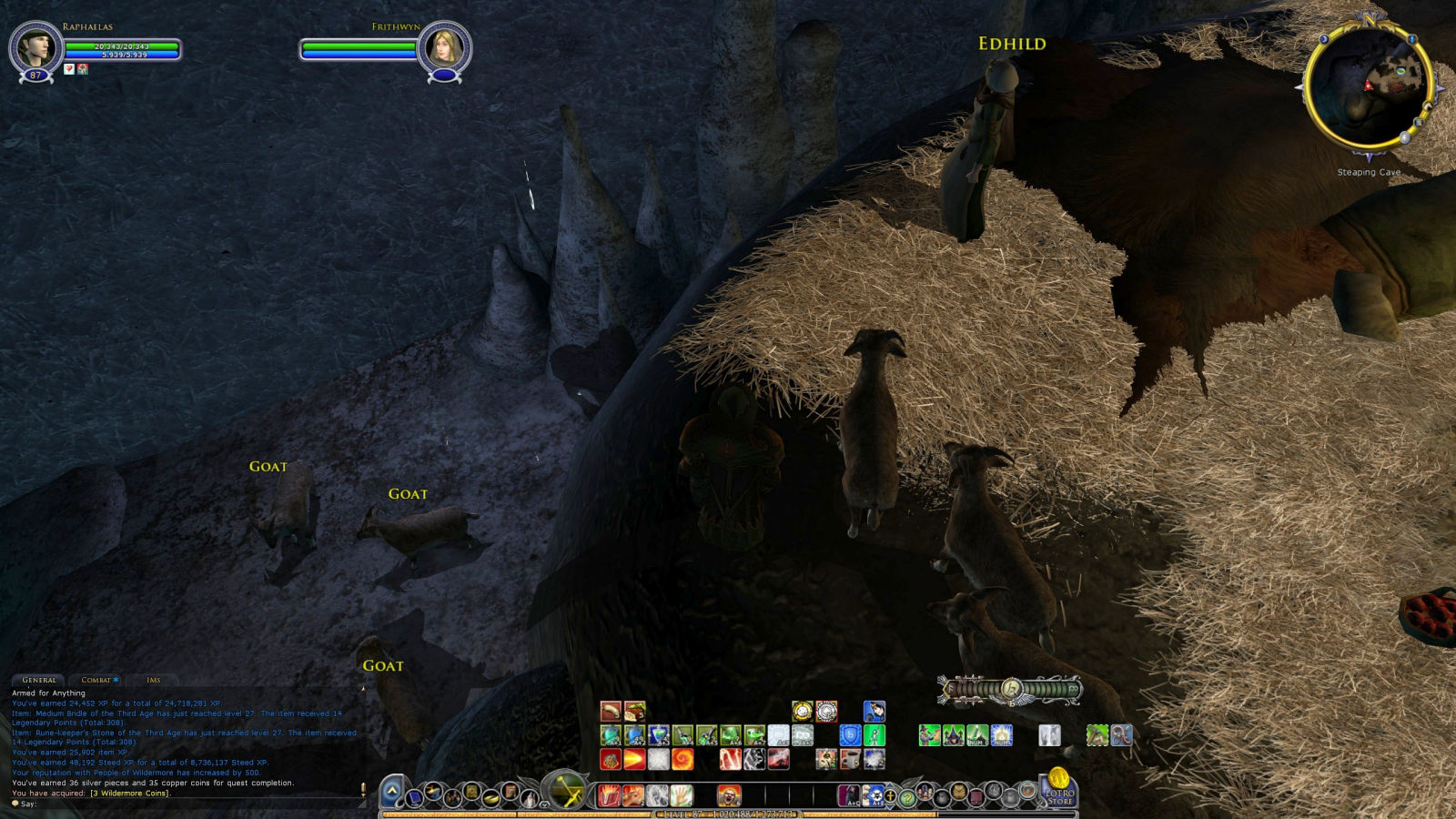 I guess you can tell I’m not really a pet guy. Not in MMORPG, at least.