Niko: Through The Dream

Graphically this was a beautiful first person puzzle game with minimalist graphics – mostly white to begin with. After a lengthy intro cutscene about a girl with green eyes exploring her surroundings (which was shown in a sketched style) I was dropped on one of many white platforms.

The puzzles were simple and relaxed to begin with. Time to lean back and relax.

I had to read the order of four elements on white stones as I approached them and then click four buttons in the same order. This created a suspension bridge to the next floating island. Here I used three by three buttons to slide circles around a transparent sphere. Next up was a maze with three colored spheres to find. Each sphere had three rotating symbols that had to be aligned. This removed colored bars.

Up until this point the game was easy and charming, one I actually intended to complete. Unfortunately the game upped the ante by introducing timed puzzles in the next section. This became a frequently repeated theme from then on and it was as annoying as it was unexpected. 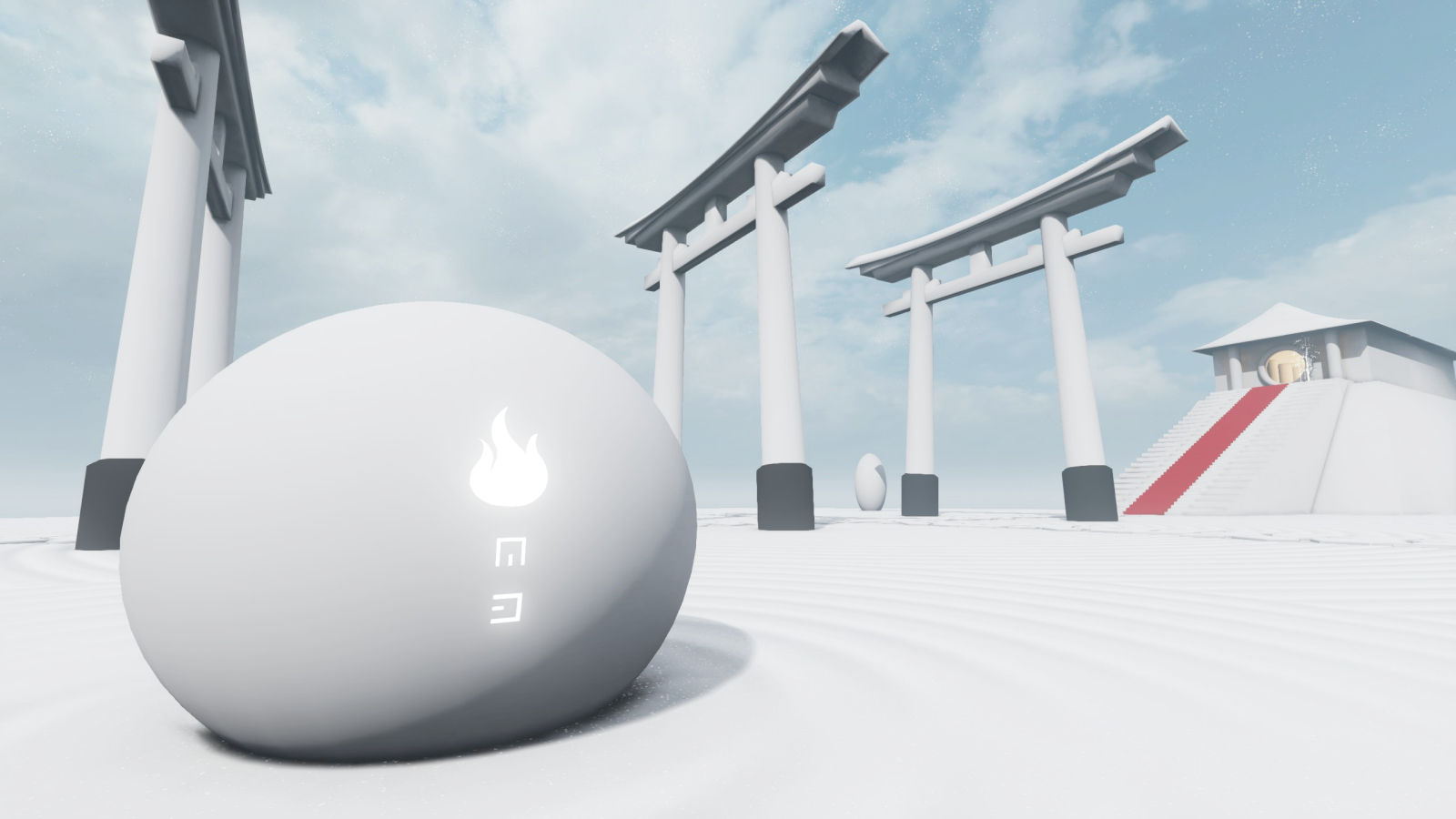 First I had to swim through tubes, opening locks while sometimes using breathing holes to avoid drowning. It took mere seconds for this girl to struggle for air, and fans tried to drag her into their cutting blades. In the beginning it was okay, but a later lock had three extra handles in the breathing hole that had me drowning a dozen times until it occurred to me that I had to do it all in one go.

Next came two relaxing exceptions. The first had me aligning color dots on a large wheel and another by using four handles to align the water level in a transparent tube. Maybe those timed puzzles were the exceptions? Nope. Now came a series of chambers with falling stepping plates. I had to time my running and jumping in different ways depending on the puzzle itself.

That’s where I decided this game belonged in the blog series about short sessions.

It’s not that I couldn’t do those stepping plate puzzles. They were challenging but not impossible. The point is that the game looked so much like one of those games with relaxing puzzles, and then it turned out to be a wolf in sheep’s clothing. I was not in the mood for that.

Return of the Obra Dinn

I’ve had high expectations of this game, and maybe that’s part of my problem with it.

It was a first person puzzle game taking place in the early 1800s. An investigator arrived by boat at the Obra Dinn and had to figure out why it was abandoned. To help out with this job, I was given a book and a watch. The watch could be activated by a corpse to see the frozen moment of death. These moments were quite cool – I could walk around and study everything like a frozen holodeck.

The one-pixel 3D graphics – think high resolution ZX81 with a modern CPU – was charming and helped nail the true uniqueness of this game. More bodies could be brought into view after studying a scene by using the watch to sort of send out a seeking mind tentacle, and I could zoom in on any person in the frozen moment to place him or her on a photo in the book. 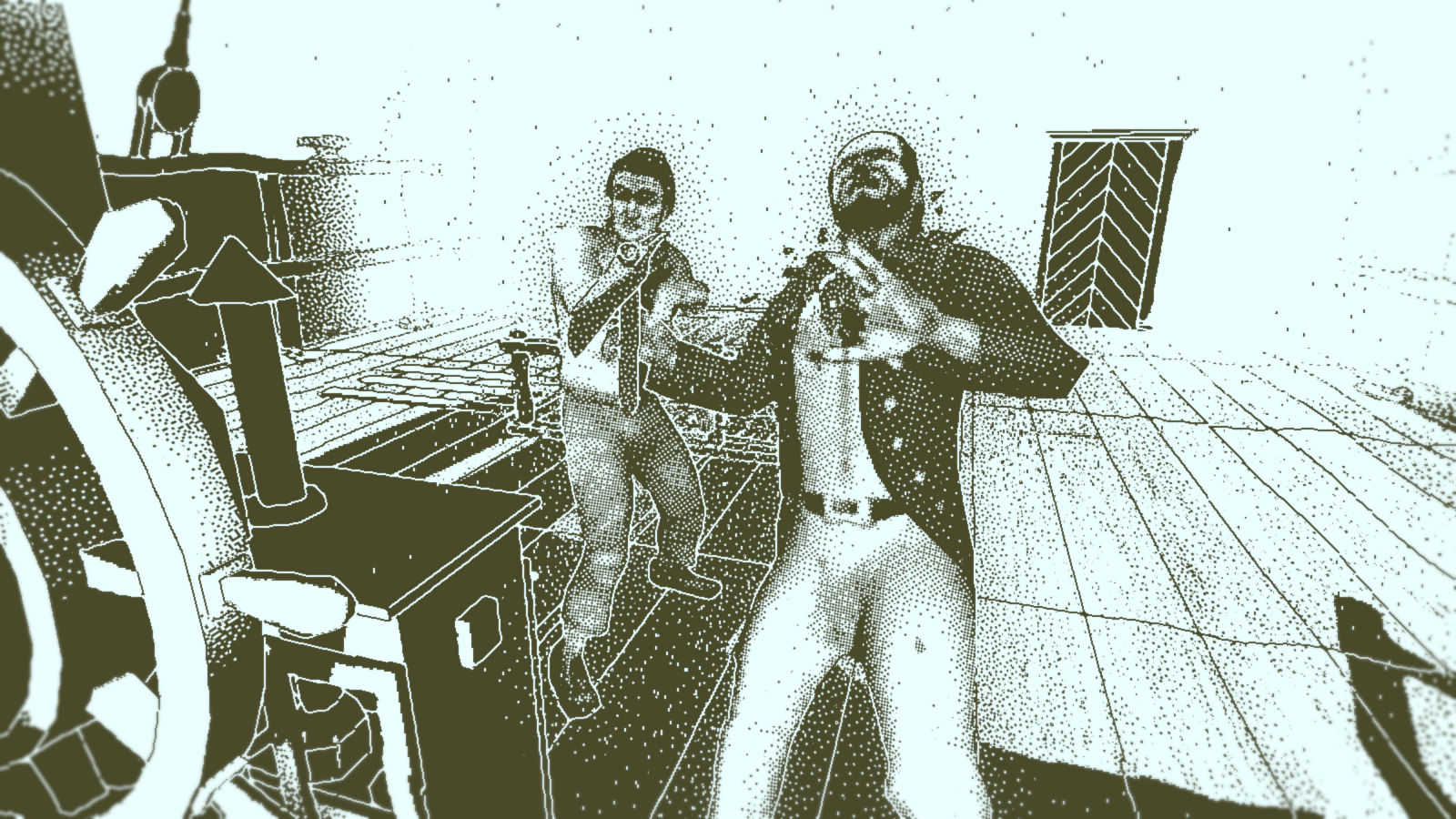 The purpose of the game was to identify the names of all 60 crew members and their cause of death. This turned out to be no easy task. The book had a lot of inset interactivity for cross-referencing hints, choose names from a list with the jobs and nationalities of the entire crew, review dialog and scenes, and determine the fates of three persons at a time.

I managed to find the fates of the first three and played more than two hours, so I would say I really gave this game a fair chance. But even so, I knew not far into it that I wouldn’t be completing it. It was too repetitive for my liking. Activating bodies and watching their moments of death felt like a one-trick pony, with a lot of intermediate detective work figuring it all out in the book.

I was missing more interactivity, like opening drawers and finding documents or letters.

Nevertheless I can certainly see why everyone has praised this game to the skies. It has a great atmosphere through the use of the monochrome 3D graphics, the music is wonderful and the set pieces in the story line are epic and intriguing. I wouldn’t hesitate to recommend it. Don’t mind me – I’m just difficult to please.

TRI: Of Friendship and Madness

This first person puzzle game belonged in the same genre as Portal, Q.U.B.E. and Antichamber. It had a nice oriental style with minimalistic graphics and different but charming music. Especially the latter did a lot for creating a relaxed and soothing atmosphere.

Typically, these kind of games always have some sort of gimmick that makes it all its own within the first person puzzle genre. This one had triangles. After obtaining the first TRI power, I could place three dots on surfaces to create a triangle to jump up on. If yellow, it was level enough to stay on it. Red, and it was too steep. Using this power to create artsy stairwells, I had to find three red idols in up to 16 levels.

I could also pick up golden bonus idols placed on challenging ledges. 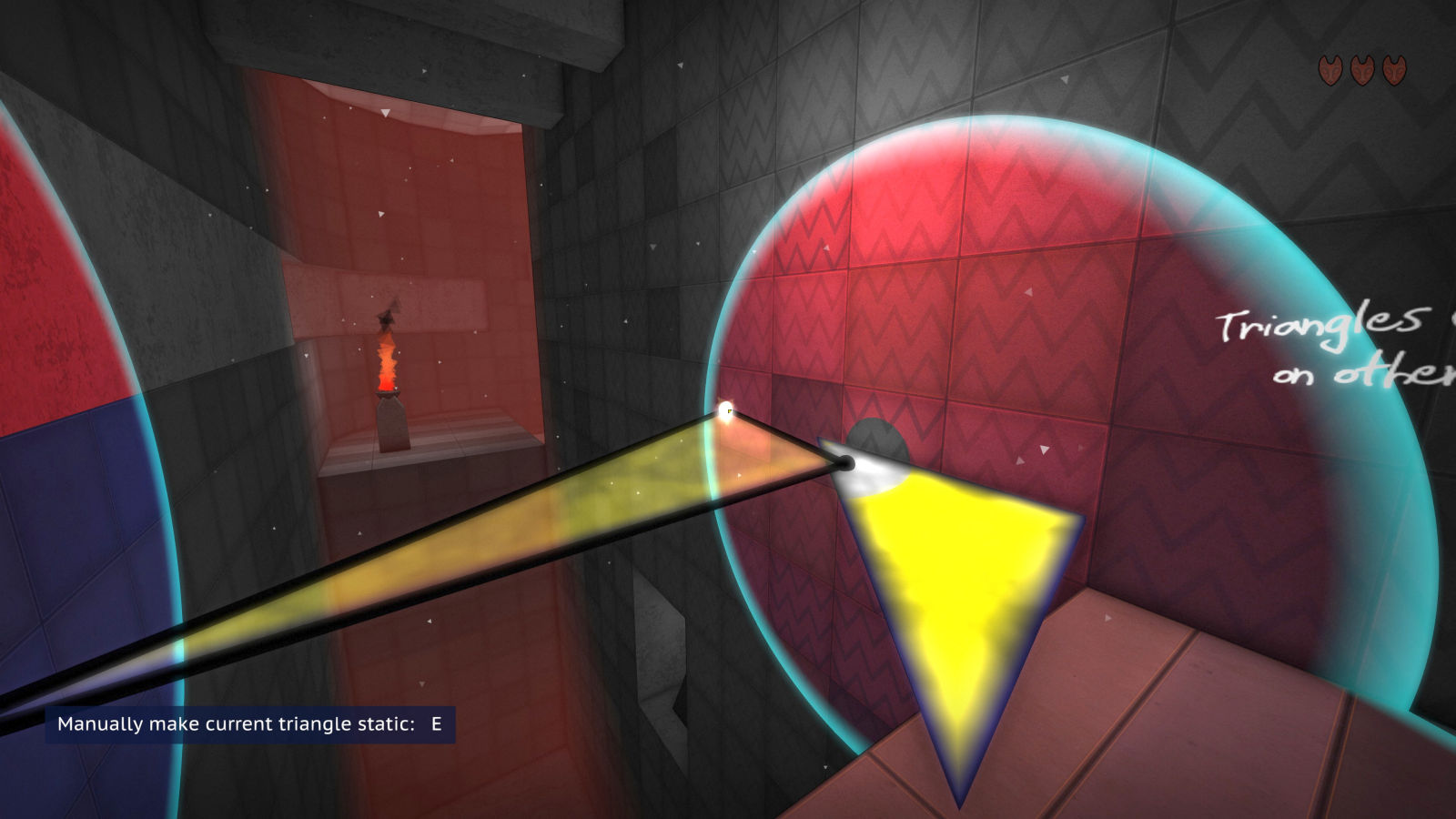 To spice up the levels, there were also boxes to move around and place on buttons, levers for e.g. opening doors, a frequently appearing guardian of the temple with wise words and maybe a tip or two, and a trivial tale between levels about two fox gods playing around like pups.

I really liked this game a lot and would have liked to complete it too. Unfortunately, creating the triangles was often quite troublesome. Even after grasping that all dots had to touch a surface and not just linger in the air – which made it slightly easier for a while – the second TRI power for creating triangles to walk on walls was the last straw. I was spending too much time recreating triangles in the same spots.

After almost two hours and 6 chapters, I decided to throw in the towel.

A much acclaimed action adventure from 2005, one of the classics I never got to play even back when I was being obsessed with video games. I’ve had the old version on GOG.com for a while and finally decided to try it out for an hour or more. It’s also known as Indigo Prophecy.

I can certainly see why it was praised so much. The story and the movie-style direction felt quite intriguing. No doubt this would have been another one I would have wanted to complete, had I bought it back in the day. The voice acting and the puzzles were first class – and the graphics serviceable even today.

The controls were certainly weird, but not a showstopper for me. I quickly got used to using the arrow keys to turn around on the spot, or both mouse buttons to run forwards. Getting close to objects showed some icons in the top with direction indicators. I then had to hold down the left mouse button while moving the mouse in the direction that matched the icon of my choice.

As said, quite weird – but even so, I’ve had way worse experiences back then. 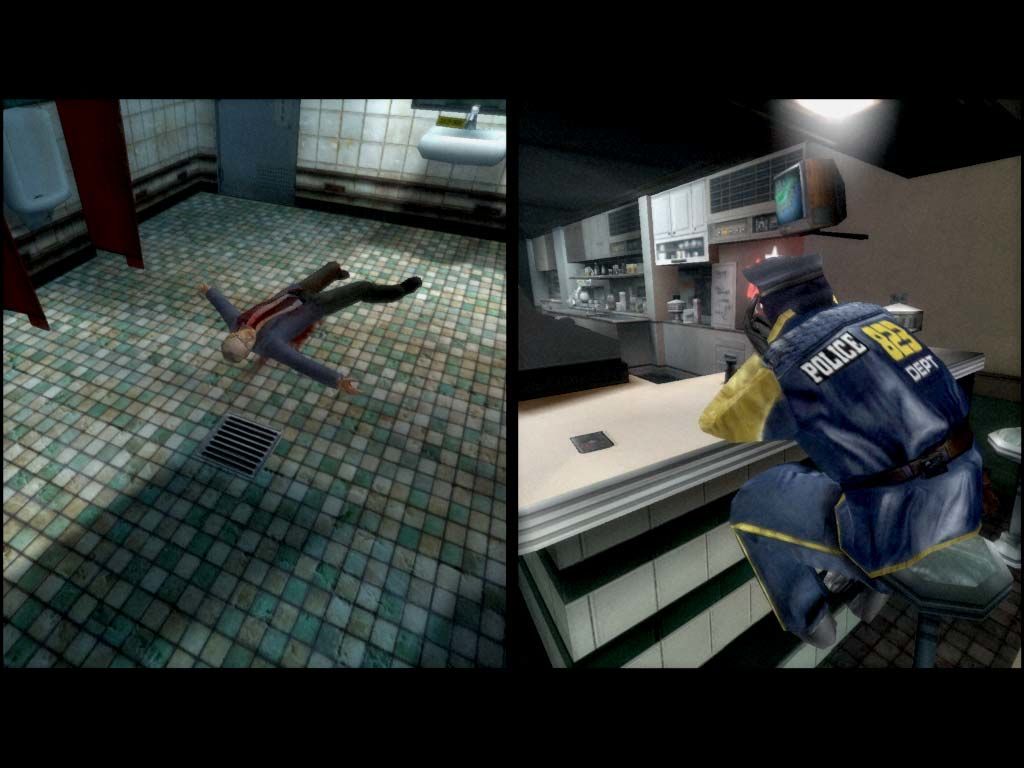 I was also impressed by how multifaceted the solutions to the puzzles were. I could get out of a murder at a diner in the beginning in various ways. Either I could clean up the toilets (and myself) thoroughly and then hide the body, or I could escape out of the front or back door of the diner. And if I didn’t pay my bill, I would have to make a run for it. I bet there were a lot more puzzle details available.

What I wasn’t so fond of were the time constraints to almost any interactive element in the game. I only had so much time to do my thing at the toilets before a cop got up and wanted to go there. If he saw blood on the floor while I was still in there, he arrested me on the spot and I had to do it all over again.

Even the dialog choices with the investigator Carla and her partner had quick countdowns. There were also quick-tapping moments and QTE to deal with. No doubt the game could potentially be stressful later.

And that means it’s not one I’ll complete these days.

Portal meets Braid – if a bit uninspired and repetitive.

Running around as a robot in a large space facility floating around close to a sun, I could rewind time on the left mouse button and also create duplicates of my previous movements. Up to 11 clones of myself could be created. This could be combined in clever ways, for example to stand on a button then rewind and create a clone to bypass the problem of the door locking just behind the button.

I must confess I didn’t play much of this one. So much about it felt too much like a budget game picked up in a supermarket. Although the graphics were pretty and detailed, most of the prefabs were egregiously reused right from the beginning. The tutorial tips from a bearded guy had no voice acting. Even the music sounded like variations on the Children theme as if made for supermarkets.

There was a minimap to help plan the puzzle solving but it was hard to read. 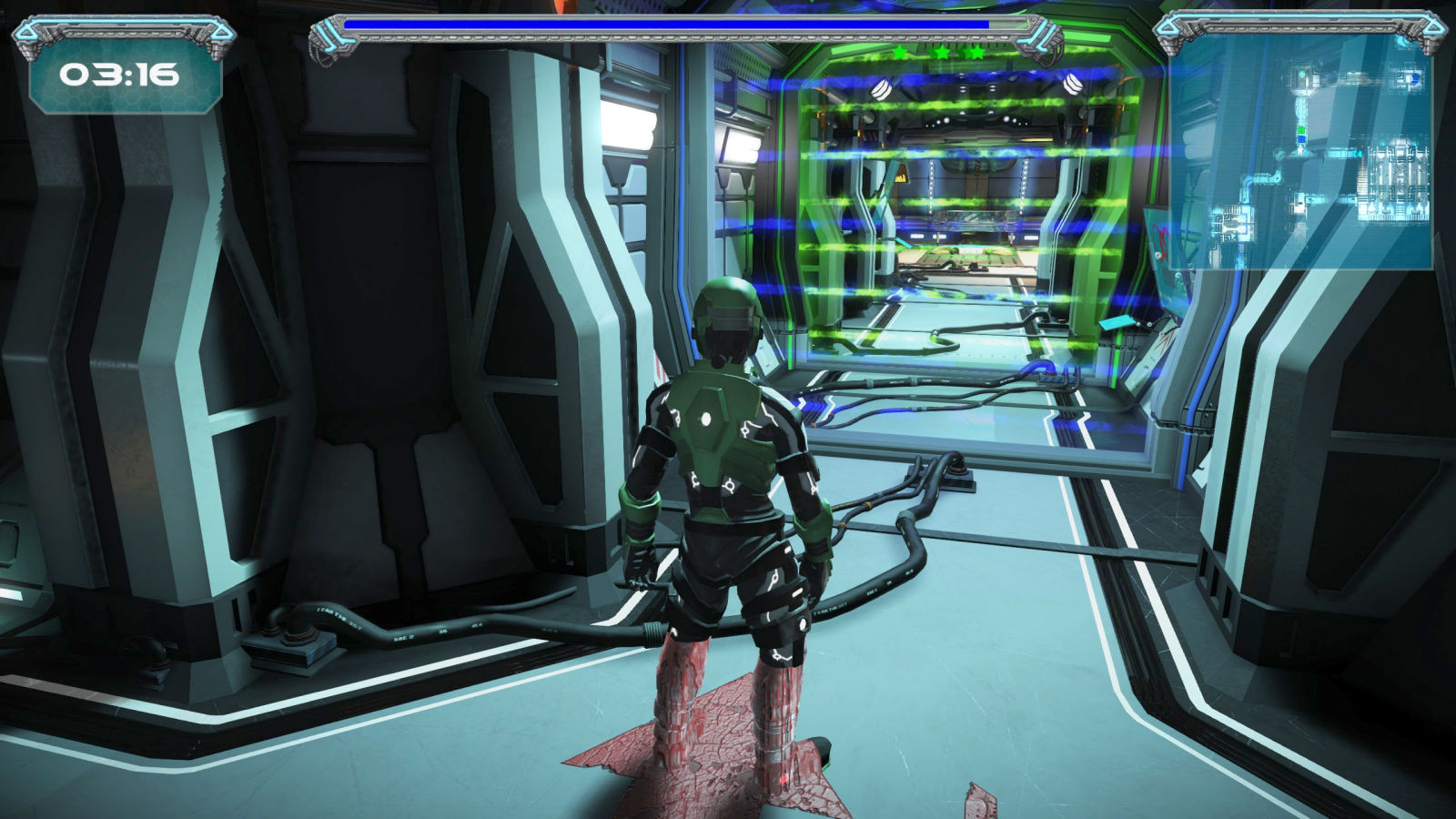 I also encountered a few bugs along the way. When I stopped on top of an arrow on the floor, the texture of my boots was replaced with the texture of the arrow, as you can see in the image above. Later, a reset of a puzzle didn’t reset properly and I was locked out of a room. Maybe I could have rewound myself out of that one, but it felt unpolished and that was the final straw for me.