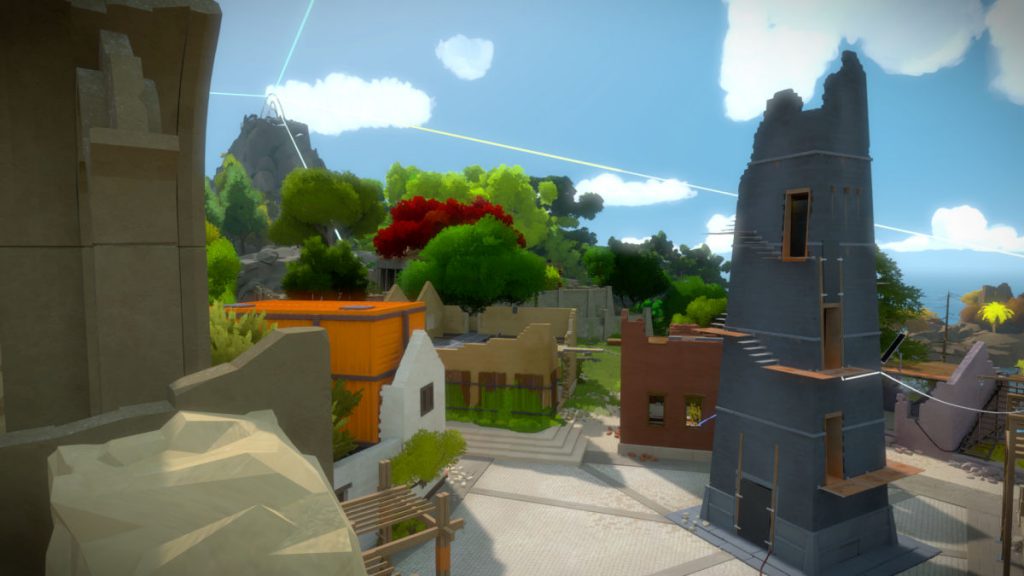 I guess I got the cheap ending. It was merely a flying trip revisiting earlier points on the island and then I was… don’t worry, I’m not going to spoil it for you if you still want to see it for yourself. What is worth mentioning, however, is that there’s a secret ending that you should look up on the internet afterwards. It’s very easy to get to yourself, so skip the video right after it spoils how to access it and go there yourself. It leads into a vast area with a lot of stuff to see, and it’s worth it.

The seven lasers I managed to switch on in sequence were the pottery, the color filters, the shadows, the illuminated puzzles, the red tree house, the mazes, and the lumber mill. I also solved quite a lot of the other laser sections, especially the wooden houses in the trees.

Most of the color filters went naturally. I figured out quickly how to stand in the right places to stack layers of colored windows together. Dots on the panels changed colors and perhaps two or three color groups became the same color, which of course affected the solution.

The shadows were also for the most part logical, even when a tree trunk obscured part of the panels. Shadows cast on the panels showed how to draw the line.

The section with illuminated puzzles went on a bit too long for my liking. Especially a cellar with a pool of water that had to be raised and lowered to see the spotlights shining on the panels, revealing the scratches from former adventurers, overstayed its welcome. But the idea itself was awesome. I really liked it and had a silly smirk on my face the first time I discovered it.

Next I tried solving the section with birds singing the solution to the panels, but although I got quite a bit into it, I kind of lost it when a pink wire went up somewhere in the bamboo forest where I couldn’t find it anymore. I also solved and opened several doors in the tower of the town, but again I didn’t manage to complete it. Especially the two solitary panels with colored dots had me stumped.

If you have played the game, you probably know which ones I’m talking about.

Some of the puzzles of the red tree house started showing how the developers could go far when it came to how the puzzles were supposed to be figured out and solved. It took me quite a lot of running in and out. It was mostly about how the wall pictures were cut out and how branches obscured panels on posts.

If you ever get to work on the panels on the posts, take a look at the floor from time to time.

For some strange reason the hedge mazes were surprisingly easy for me. Rules such as sounds walking in the sand indicating where to turn didn’t fool me for long. Maybe it was because I started on these relatively late and had already been through a lot of similar rules for other panels. 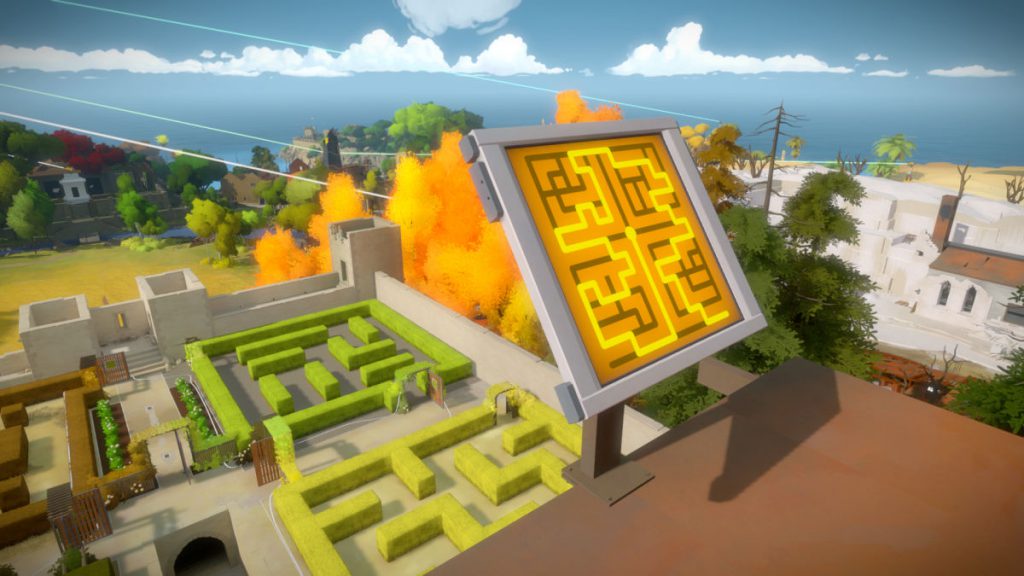 As mentioned I got quite far into the section with the wooden houses in the trees. I managed to solve panels to create bridges almost all over the place, but then a timer task popped up. A switch was drawn and I had to run back like hell to reach a door before closing. I got no where near and it was clear that there was some trick to it, but I decided not to bother. I really hate timed puzzles.

Instead I went and solved that last part of the lumber mill. I had already opened the first half of the panel bolted to the yellow laser compartment, and the second part required me to solve panels with rules I had only learned much later. Lots of panels side by side here.

Finally I had turned on all seven lasers required to enter the mountain. Of course there was a panel on the lid itself to solve before actually entering, and it was made frustrating by the feet from stone statues preventing me from always going where I wanted with my lines.

The main meat of the inside was a large shaft with about three floors. The first had a panel to create a walkway as part of the puzzle. There were also a series of panels in both walls, damaged by what seemed to have been short circuiting. Some rolled around like old televisions, others had grids in front to make it difficult to see the dots behind.

The next floor below took the idea with damaged panels even further. Panels with colored dots were very difficult to solve because of psychedelic flashing of colored backgrounds. I didn’t particularly like that series. There was also a series of panels on the other side of the shaft where the solution had to reuse the same pattern for all of them. I actually liked the idea behind this one, even if it frustrated me a little. The walkway created with a panel on each side of the shaft was pretty annoying, though. It was another one of those where I wished the developers had cut me some slack. 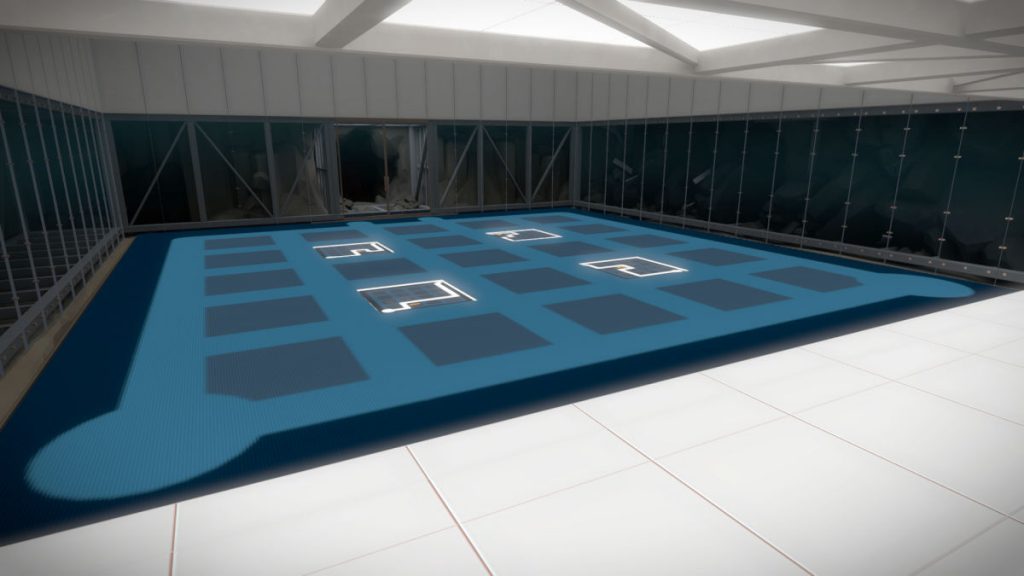 But the absolutely worst part was the bottom of the shaft. Four small panels had to be solved by surrounding Tetris pieces. That by itself seemed strangely easy, and I knew there had to be a catch. Then a big grid surrounding all four panels switched on, and it had to use a double line to form the Tetris pieces selected from the four smaller ones. I was so stumped by this one that I actually tried brute forcing the big panel for a while, of course to no avail.

That’s when I started drawing the board and Tetris pieces on paper and started puzzling it out by my dinner table. Matters were made worse by three of the small panels each making it possible to get one of two different Tetris pieces. That escalated the solution quite a bit. I also got stuck by not being able to get the other Tetris piece from the fourth panel (it was impossible) because it was used in a solution for the big panel that I pieced out by the dinner table. I took a break of several days and returned later, but even then I had to play around for quite a while more before I finally got it.

That last puzzle in the bottom of the shaft made it clear that now I just wanted to beat the damn game.

Luckily not a lot was left after that monster. I had to solve panels wrapped around eight poles. The poles were thin and it made it impossible to see the entirety of the panel at one time. Lots of spinning around while drawing the lines. Some were a bit frustrating, but it was still nothing compared to the hell I had just been through in order to solve the bottom shaft puzzle.

Solving the panels on all poles conjured a cage that looked like it was designed by elves. Stepping into it gave me a levitated flight across the island to review it from above, then I was brought right back to the starter area, resetting everything.

I actually liked the game a lot to begin with. No story to speak of? Not a problem with me.

I’ve always had this thing with puzzles in games where I overthink the solution making it harder for myself, then it turns out the solution was actually simpler. The Witness had a lot of puzzles where I immediately started overthinking followed by solving it anyway because the panel actually was that difficult.

Maybe this game had puzzles that often clicked with me?

But later parts of the game escalated the difficulty and obscured the panels in a way I thought was going way too far. The fun dripped out of it and I started moving my mindset into just completing the necessity of the panels and get it over with. I never wanted to cheat because I wanted to be able to at least say I honestly beat it, but it really tested the limits of my stubbornness.

2 comments on “Completed: The Witness”