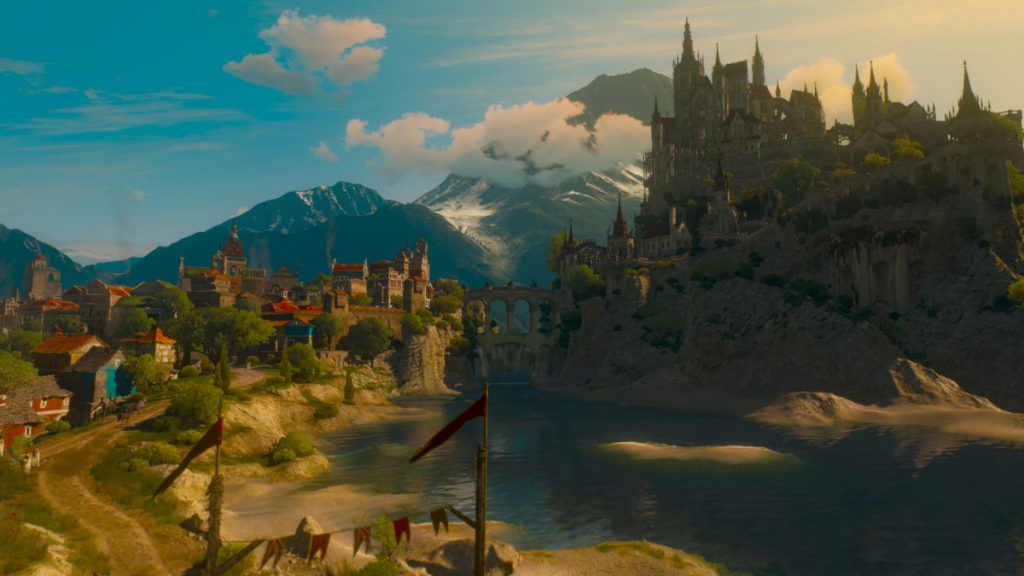 Worst of all was the end boss of the main story. Without spoiling here who and what it was, it was a true end game boss of the highest caliber. Multiple phases, attacks that could empty two thirds of my health bar in an instant, and having to learn the proper way to avoid these attacks after multiple deaths. It felt like something that belonged in Dark Souls. After a few repeated deaths not getting it down below 50% health, I had enough of that nonsense and temporarily turned down the difficulty level to the easiest setting.

As far as I remember, that was the only boss of the entire trilogy where I had to do that.

Geralt was also given a homestead not too far in the main story. Normally I’m not that thrilled about housing in RPG, but this was just the light kind that I could manage without it becoming an expensive burden. It was also a plus in my book that the main house was actually quite small – no need to waste time in long corridors and multiple floors of a castle. I could talk to a caretaker and give him money to repair or expand a few areas, my weapons and armor from my stash could be put in racks, and paintings put on placeholders on the walls inside the house. I even had a few visitors taking up residence later. 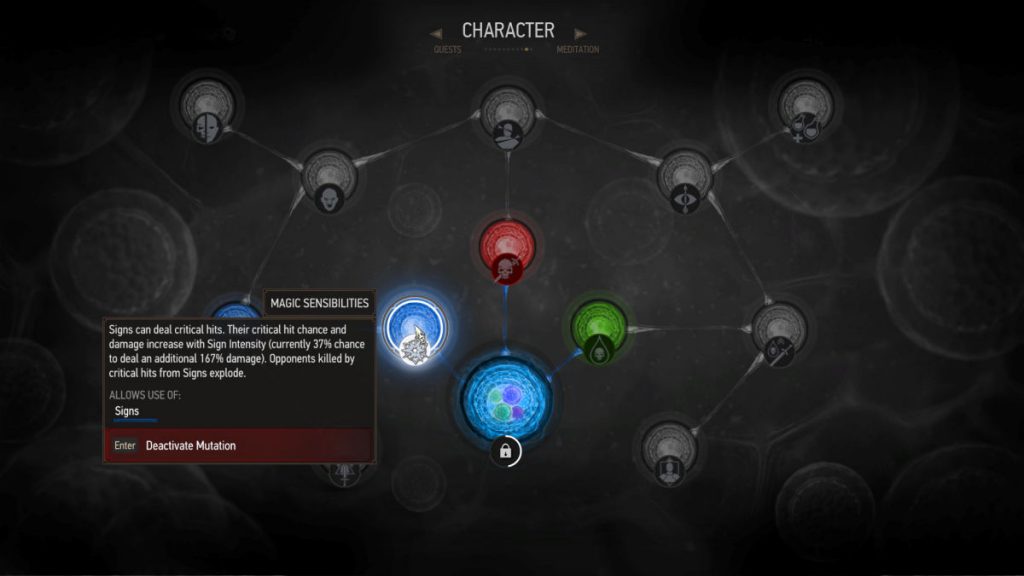 Another new addition was an expanded interface for mutagens. After a long dungeon quest enabling it, I could use my level points in a new sort of skill tree for additional powers, most of which were combinations or more percentages. I immediately went for one that could add a 25% freeze effect to my push ability, but in spite of a reviewer claiming that it was overpowered, the push didn’t feel any different to me. Maybe it was nerfed? I liked how this made level points useful again, but maybe they went too far. A lot of the new powers requires up to five level points to be activated. Five whole levels for one upgrade.

The main story of the game was actually just a monster contract to begin with. The duchess of Toussaint, Anna Henrietta, wanted me to kill one that seemed to murder specific persons. I met Regis, a friendly vampire that assisted me during a lot of the quests, as well as Dettlaff, the vampire that had murdered the persons because of being blackmailed by kidnapping his girlfriend. It seemed simple enough to begin with, but as the quests dinged by, things grew considerably more complicated.

Just finding Dettlaff was a monumental task because supposedly vampires are exceedingly good at hiding. Regis had to brew a potion to help finding him, and one of the ingredients was the saliva of a rare type of wight. I found the wight in a house full of spoons. The wight was obsessed with spoons because of it being bound to her curse. Instead of killing the wight, I had a meal with it at a table where we skipped the spoons. Her curse was lifted and she later took residence in my homestead at Corvo Bianco as a cook. 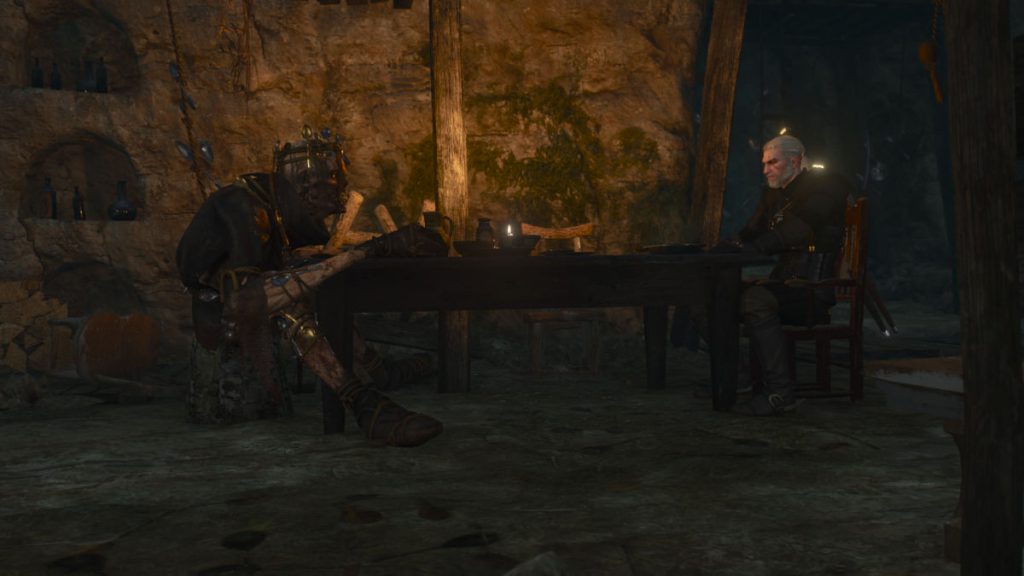 Another one of the ingredients was to make Regis mad enough to change the chemistry of his blood. We went into a dungeon and Regis was enclosed inside a particularly sturdy cage. The cage was raised, and as monsters swarmed the arena below the cage that I had to fight, Regis got crazy and transformed. The fight was another one of those that I thought was a bit more difficult than it needed to be, but I managed it without having to turn down the difficulty level. 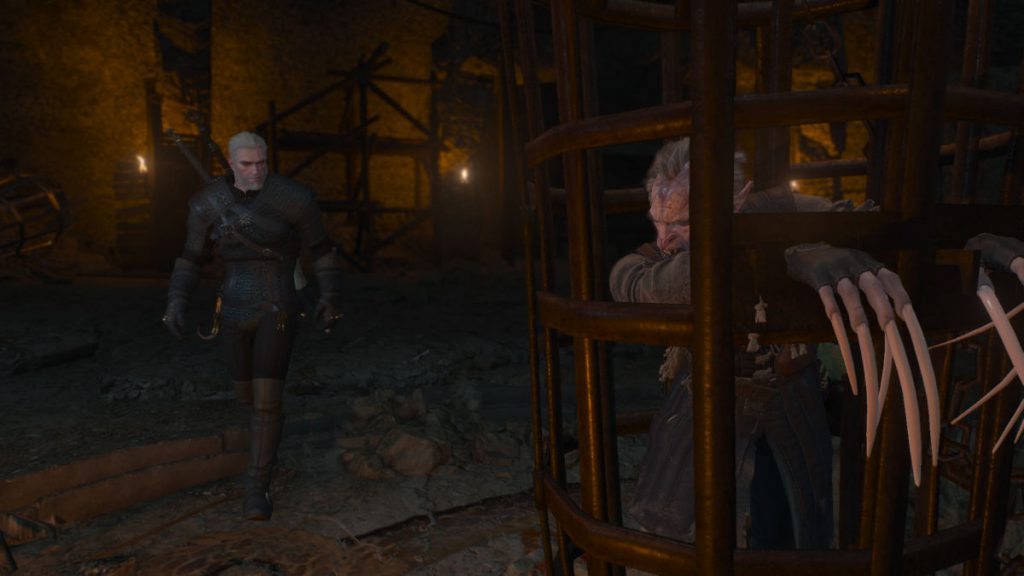 One part of the main story that I’m actually happy that I didn’t predict right was about the bald captain. He was suspicious to begin with and I was sure that a cliché betrayal was awaiting at some point later. But he actually turned out to be all right and eventually accepted Geralt’s help.

I wonder if it was by design that the developers wanted gamers to suspect him to be in on it?

There was a point later on in the main story where that captain stormed a castle together with his men while Geralt snuck inside and hacked down people by surprise. In some of the bigger battles outside the castle, the two vampires Regis and Dettlaff helped defeat the baddies. I was completely overwhelmed by how efficient they were at it. They blinked around like superheroes and killed the bandits in a fraction of the time it would have taken me to do it. 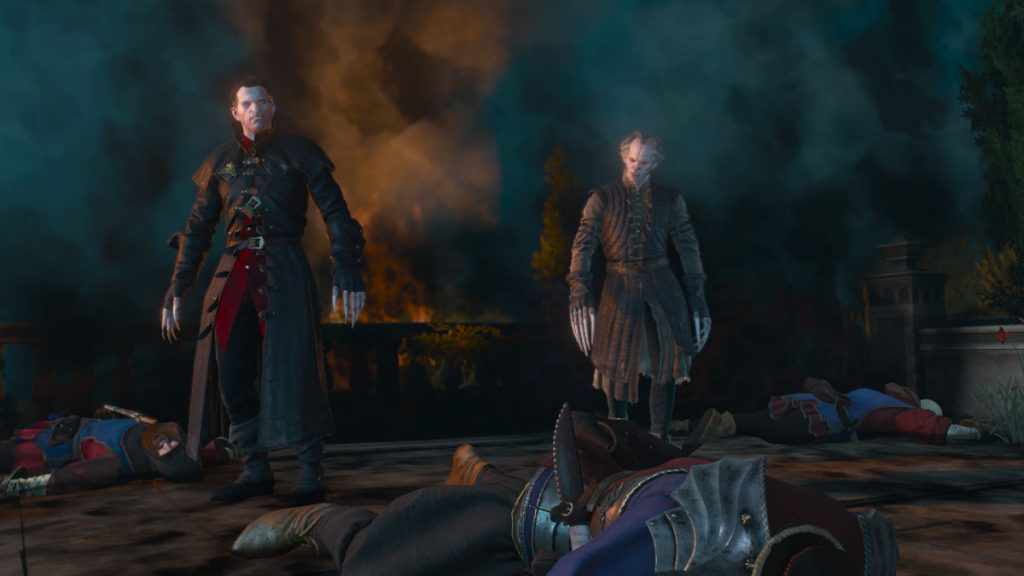 Then we went inside to find Dettlaff’s captured girlfriend.

The girlfriend turned out to be Anna’s evil sister Sylvia and was actually the one responsible for all the commotion. She had been banished as a child and since wanted revenge. Dettlaff had been played, and he got so pissed about it that he started a vampire invasion of Beauclair, the big city of Toussaint. Two options arose – I chose the one where I had to save Sylvia. 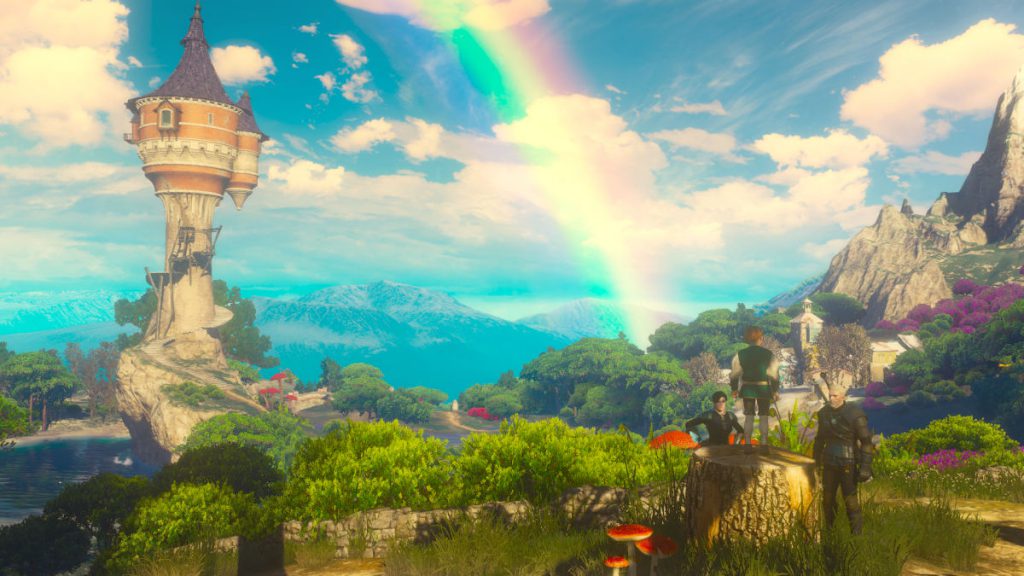 Regis and I inspected a house with toys, and pronouncing a phrase in there popped me up inside a sunny fairy tale world. Big fungi and a rainbow in the distance. After a nasty boss fight against a witch on her broom, I met Sylvia. Together we had to solve classical fairy tale quests to get the three beans of growing a beanstalk we could climb up and escape by. We found all sorts of cute fairy tale areas. The big bad wolf, the boy who cried wolf, Goldilocks and the three bears, crumbling a small house to reveal the three pigs, even another boss fight against Longlocks in the top of a thin castle. Shrek would have been proud.

And then we made love.

Not long after returning to the burning city of Beauclair, Sylvia, Regis and Geralt went to a dilapidated castle area to meet Dettlaff. He tried to kill Sylvia but in doing so she automatically teleported back to the fairy tale world, unharmed. That just got Detlaff even more pissed. Regis tried to fight him but was of course buried under some rubble. The boss fight between Dettlaff and Geralt was the one I was referring to in the beginning of the blog post. The one with a mysteriously sinister difficulty setting. 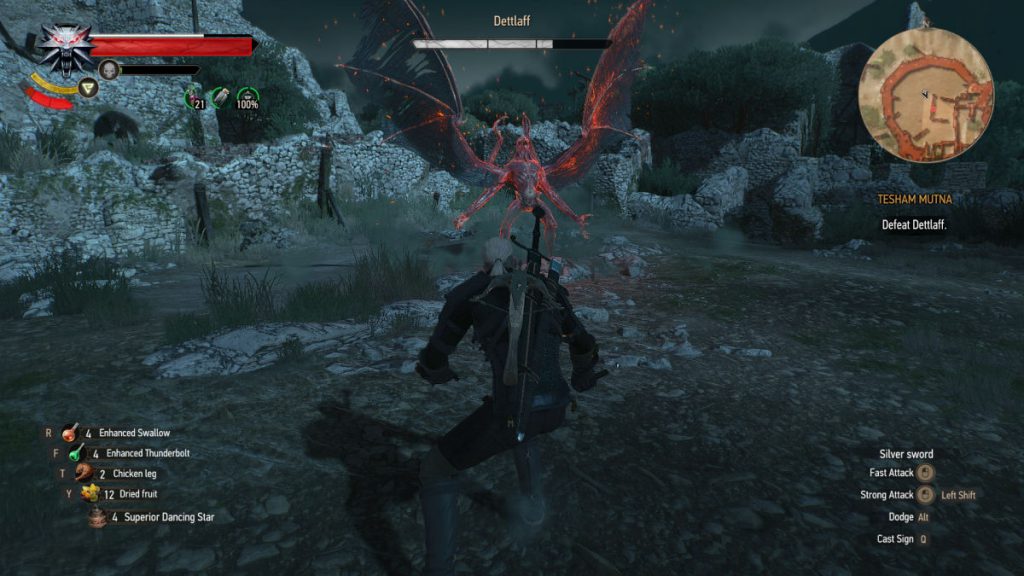 After a small epilogue trying to make Sylvia see some sense, Anna Henrietta and Sylvia made up, caressing each other. Sylvia didn’t want to at first but eventually she gave in. This was remarkably well animated and actually made me get a whole lot of dirt in my eyes. I don’t understand it, I’ve just vacuumed my apartment the other day. Where did this come from all of a sudden? 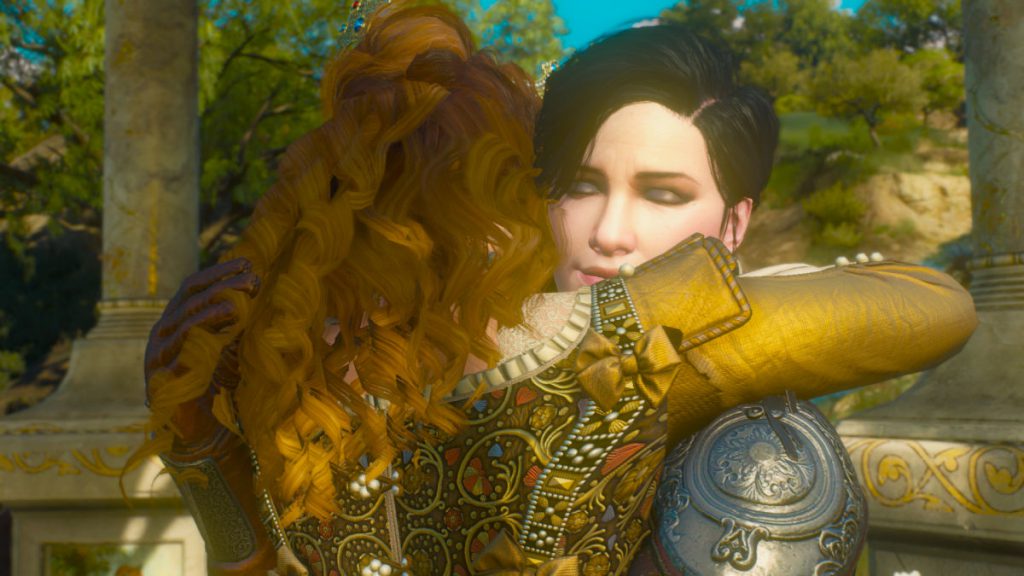 Back at Geralt’s homestead, Yennifer arrived just to hang out. She wasn’t fond of the heat as it didn’t work well with her dark attire, but actually putting on brighter clothes? No, absolutely can’t have that!

And as the main story ended, Geralt looked straight at me with a smile. Nice touch.

Fantastic trilogy although perhaps just one expansion pack would have sufficed.

That was the end of the second expansion. Click here for the leftovers.