I’m now level 41 and barely started in snowy Iron Pine Peak with lots of chilly winds coming out of my loudspeakers. Droughtlands and Moonshade Highlands are both behind me. Since most rifts are often conspicuously left alone on my shard, I decided to do quests in both of those equal level zones to avoid hitting orange quests. I also tried healing in a dungeon (King’s Breach) but soloing has occupied 99% of my time in the game.

The more I play, the more I have to say that Rift doesn’t rub me quite the right way. It’s indeed very slick, beautiful, it has an impressive range of features for such a young MMORPG, and the rifts are a lot of fun to do with many players. Soloing with quests drags the game down, however, and I’ve seen in reviews and on other blogs that the game generally gets a lot of criticism in this area. There’s something about the quests that feels like working in a factory. Here, have these five quests. Go to these yellow circles over there and complete them. Return and deliver. Get another five quests. Go to the yellow circles right next to where the other yellow circles were. Rinse and repeat.

Quest grinding is not a new thing and I’ve seen the like in other MMORPG too. It can be spiced up with more imaginative quests (Wrath of the Lich King and Cataclysm), intricate story lines like the book quests in LOTRO or just with enough variety to keep it interesting. In Rift, not only does it feel a little like a job, there’s also something about the game itself that feels shallow.

In both LOTRO and EQ2 I’ve been happy about the atmosphere because it actually feels like an interesting fantasy or alien world. Sometimes this can make all the difference. I played Morrowind for a long time after the quests were pretty much completed, merely exploring various caves just because the world felt so intriguing. In Rift, the world feels exactly like what it really is; a game world. Nothing more. When I’m climbing the mountains looking for artifacts, cairns and hidden puzzles, I’m not really walking on mountains. I’m walking on polygons and textures.

This could of course just be a consequence of me having played so many MMORPG the past few years. I’ll keep it in mind when other MMORPG are released the coming years. If this sensation keeps popping up, then I guess it’s just me.

Regarding quests, it’s not all bad. Underwater quests and quests in deep caves are rarer than in other MMORPG, and that’s a thumbs up from me. I’ve also noticed that the mobs never heal themselves (at least I haven’t seen it yet). Solo mobs healing themselves have always been my number one loathe ability; an ability that only players should be able to do. Seems Trion Worlds agree. So far.

It’s also wonderful to see how almost all NPCs in a camp attack all mobs that gets too close. Quest givers, vendors, guards, everyone. Of course it needs to be like this in a game where invasions often attack a quest camp. I just wish it was more common in other MMORPG. There were too many times in LOTRO where I dragged a mob back to a quest camp only to see everyone (even the guards) not giving a damn. It drags down on the immersion. There are exceptions in Rift, though. At one point I dragged a named quest pig into a camp and it must have had a special attribute telling the NPCs not to attack it. But luckily these exceptions seems to be rare.

In a previous blog post, I mentioned how I buffed and healed a Wardstone that needed it. Not long after I discovered that buffing a Wardstone is actually completely in vain. An endurance buff doesn’t move the health number at all. You have to use the Ascended Power skill that you can buy in the main town. Healing is still warranted, though, so at least I can do that. But Trion Worlds really ought to remove the possibility of putting player buffs on a Wardstone if it has no effect anyway.

Speaking of the Ascended Powers; make sure you buy these when you can afford them. I made the error of assuming they were temporary abilities that would be consumed (we see so much of that in MMORPG), but you actually earn permanent spells that can be quite helpful. One can power up a friendly Wardstone and give it the extra endurance your player buffs can’t, another makes you much more powerful for 30 seconds, and yet another calls upon a team of friendly guards to help take down an enemy Wardstone. Especially the latter is a great help when returning to a quest camp where an invasion has taken over everything.

The zones in Rift are indeed beautiful, but they did cut a few odd corners I wish they didn’t. I miss trees moving in the wind, for example. In LOTRO and especially in Vanguard, this added a lot to the atmosphere of the game world. It’s also a little sad that you get the fatigue bar if you try to swim too far away from a continent, yet you can also still find invisible walls at the top of mountains.

By the way, is it just me or do the zone designers at Trion Worlds really like hollow tunnel trees?

Moonshade Highlands was stylish with heavy rain clouds in the distance and sometimes even a bit of local rain. It seems Trion Worlds have decided to only have weather that actually suits the theme of a zone, instead of just having random weather phenomena in various zones like in other MMORPG. I like that idea, it makes a lot of sense. No more rain in the desert (yes, it does happen in real life but certainly not that often). On the other hand, I wasn’t too fond of the dark clouds turning everything into pseudo night. Good thing they tuned that down in a recent patch. 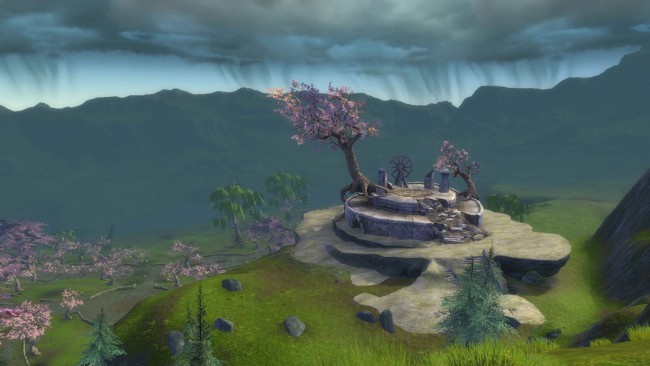 If you haven’t been to Moonshade Highlands before and you’re a Guardian, make sure you enter the zone from northeast in Silverwood. I thought I was supposed to go to Gloamwood and enter it from the west, but I was killed a few times as this turned out to be Defiant property. Nevertheless I got stubborn and still made my way to the small town in east.

One thing that puzzles me is that a few selected mobs really hit extraordinarily hard for apparently no reason at all. Most of the time a single heal and a magic shield will do the job nicely and I can even take on 2-4 even con mobs and still get out on top. In Moonshade Highlands, however, there are small huts down by the lake with strange humanoids that look like Murlocs bred with Ratonga. These buggers hit harder than almost any other solo mob I’ve seen so far. At one point I joined up with another guildie and he too was baffled at the damage done by these guys.

Speaking of tough, I’ve also noticed that certain solo bosses at the end of quest chains can give me a really hard time. One example is Tidelord Brenin at the end of the story quest line in Moonshade Highlands. I really had to use everything I had, including potions, just to keep on top. I have a build with 95% of my points spent in the Inquisitor soul and a few sensible points in two healing souls, and usually I don’t have problems keeping up with mobs. Being an old gamer with years of experience in WoW, EQ2 and LOTRO, I know when to pop lifesaving abilities. But later in Droughtlands, I even found two quests that I actually rage abandoned, something I usually never do.

The first one was “Carrion’s Song” where I had to use an item to temporarily weaken a big bird. Again I gave it everything I had, buffed up and used potions. It still killed me off. One of the final quests was “Dropping the Eth Bomb” where I had to use an item nearby an obelisk and then kill a zerging army of mobs. I was hoping that the pulsating shield given by the item/obelisk would give me enough endurance to keep myself alive, but alas it seemed it didn’t at all. Within just a few seconds, they managed to milk my health bar dry like there was no tomorrow. I even tried the quest twice thinking I was doing something wrong, but it was just the same thing. I later read in the patch notes that they changed the quest to allow squishies to keep up. In my opinion it still needs some work. 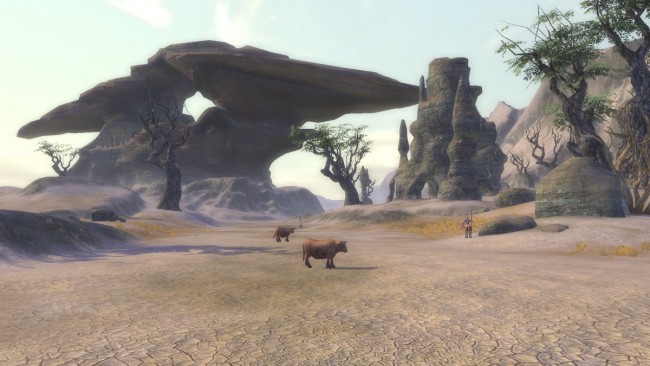 Droughtlands was another desert zone with eroded cliffs and a lot of centaurs. Upon arrival I explored a huge cave system with neutral NPCs (Lantern Hook) and of course a lot of quests. Too bad we are not allowed to ride in there. Why is that, exactly? I certainly didn’t see any expensive carpets. In fact, it was wet and dank and also quite knotty. Being allowed to explore it on a mount would have made a lot of sense.

Apart from centaurs there are also one-eyed scorpions (big model too), cows, scarabs, small raptors and an underground cave system with big ants, just to mention a few. One of my favorite quests in Droughtlands was “Untamed” where I had to spray a Blood Lure on a humanoid mob walking with a raptor pet. It made him smell deliciously which in turn made his raptor pet attack him right on the spot. I love it when I can orchestrate something like that.