This may very well be the prettiest game I’ve ever played so far. The texture detail is really out of this world. The faces of the 3D models are extremely detailed, with stubble, pimples and birthmarks accompanied by realistic facial animation that fits the lines of dialog well. The clothes really look like clothes, whether it’s dry or wet from rain – it’s almost like I can feel its volume at times.

Graphically, this game sure is a feast for your eyes.

But as is typically me with big and complicated RPG these years, it didn’t actually grab me until the third session or so. It felt too overwhelming to begin with. Tons of screens, skills, inventory tabs, a tutorial that frequently paused the action, and words on the internet about enormous maps with a never-ending amount of question marks to find and reveal. I persevered because I knew it would be like this for me in the beginning and it turned out to be the wise thing to do.

Eventually it finally managed to grab me because of how meticulously it was designed. Although I didn’t agree with all of the gameplay mechanics, it was clear that the developers really tried to do their very best in many areas. If one part of the gameplay made me frown a bit, five other things made me grin like a child being offered an ice cream that needs to be held with two hands.

Especially the side quests have been really impressive so far. So many RPG pile this up with quests about acquiring ten bear asses, but in The Witcher 3 they are almost all interesting and varied, with lots of dialog and often a bit of detective work. Borrowing from games such as Rocksteady’s Batman series, I can turn on my Witcher senses (a fish eye effect then occurs) to spot evidence in red, examine it with comments, then perhaps following a red trail of footprints or a thread of smell meandering through the air. Surprisingly many side quests have this part built into them and it’s a nice digression from smacking monsters.

Apart from side quests, there are actual monster contracts to grab from notice boards in villages. The monster at the end of the investigation is often a strong mini boss that takes potions, oils, rolling, bombs and loud swearing to defeat. Some of them felt a little too excessive for my taste, though.

I also liked the way unknown spots on the maps were handled. In other open world games this is typically obscured and either found by pure chance or marked after a dialog with an NPC. Here, a lot of question marks are sprayed over the maps like salt and pepper. Finding one can reveal a lot of different things and chances are always big that fighting is involved in one way or another. 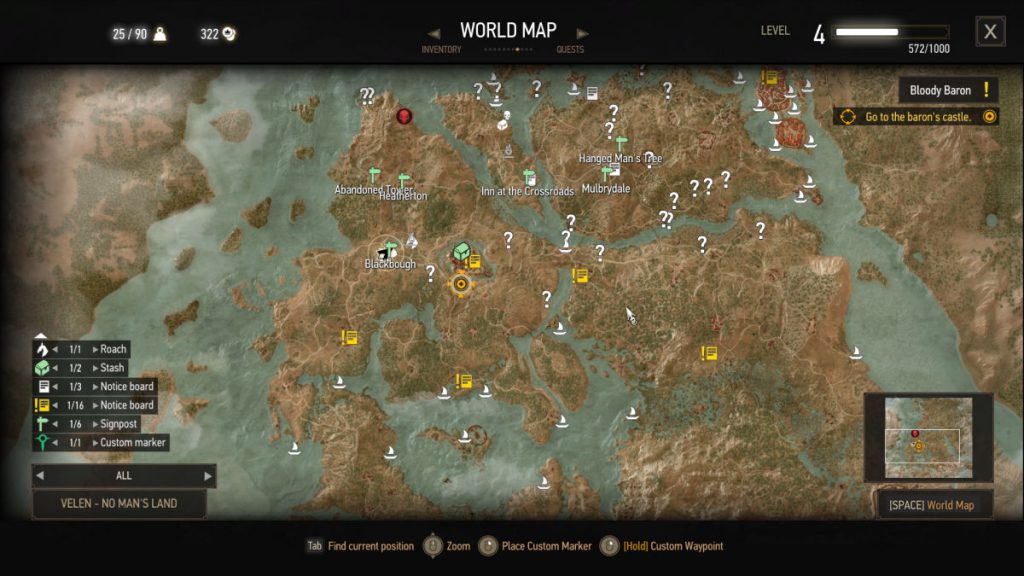 Some examples of the most common types of question marks? It can typically be a bandit camp, monsters around a nest that then has to be bombed and looted, a place of power to suck from and earn an ability point, a dangerous mini boss circling an enticing chest, or a small village to clean out of monsters after which peasants move back in and offer shops.

Sometimes the mini boss was too high level and I marked it on the map with a custom red skull for later, but most question marks was handled right here and there, leaving a grayed out type icon behind.

Fighting honestly wasn’t all that original in spite of using monster-specific potions and oils on blades. Left mouse button for attacking, right for parry, right for counterattack when the monster telegraphs an attack, rolling away from monsters with a big reach, or dodging from e.g. humans to preserve stamina for signs. And as a cherry on top – middle mouse button for throwing a grenade-like bomb or shoot a crossbow.

The crossbow was weak, except underwater – for some reason it was a one-shot wonder there.

I could choose between five signs with magic powers for close combat use that made me feel a little like a paladin. Yrden for laying magical traps, Quen for shielding myself, Igni for fire, Axii for stunning or soothing, and Aard for a telekinetic push. I mostly used Quen for reduced damage. Later upgrades of this could create a temporary bubble shield that recharged my health each time the monster tried to hit me.

One of the less impressive details of the game is how hotkeys for potions, foods and bombs are handled. I have to dump these into a clover of cells in my inventory and then reach out using the hotkey R, F, T and Y. It was possible to get used to it, but I would rather have had the classic action bar instead. 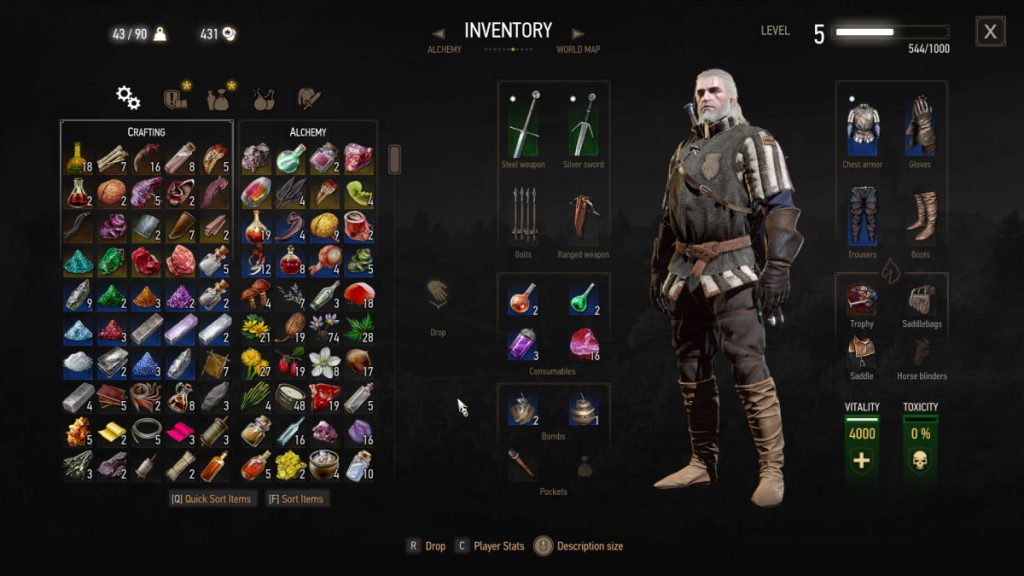 Skills is the typical talent point stuff. One ability point achieved from level-up or a place of power. Skills can be upgraded and each placed in another tree for activation. Mutagens can then be placed next to this tree, and if the colors match up, they also get stronger. These upgrade various stats and are obtained mostly from monsters, and they can be combined for stronger versions.

Geralt actually felt a bit heavy on the turning to begin with, as if one of his ancestors was a ferry. Luckily, there was an option for alternative movement and it was better. I kept it on as soon as I discovered it.

One thing that once again pissed me off was that it was impossible to rebind the quicksave key. Not even editing a configuration file helped. Funny how they continue to disallow this in game after game. I decided I didn’t want to play along anymore, so I downloaded AutoHotkey and wrote a small script to direct F5 to Keypad Plus instead. It worked perfectly.

I’ll keep this handy for other games in the future.

After doing most of the first zone, White Orchard, I spent most of this first part in the second zone, Velen. It turned out to be a nasty mix of weather. When the cloudy weather arrived with strong winds and rain, it was very convincing. We have come a long way since Morrowind. Sadly, it was also a bit too much of a good thing. Sometimes I tried meditating a few hours to see if I could make it go away, but it didn’t seem to be as easily disregarded as it was in e.g. Risen 2 (where it was possible to trick it like a toggle switch).

Fast traveling was tweaked a little by only making it possible from one sign post to another in the zone. It made a lot of sense to me even though it meant no fast traveling from anywhere. Most villages and also some points of interest have a sign post, but oftentimes you have to visit the place first. 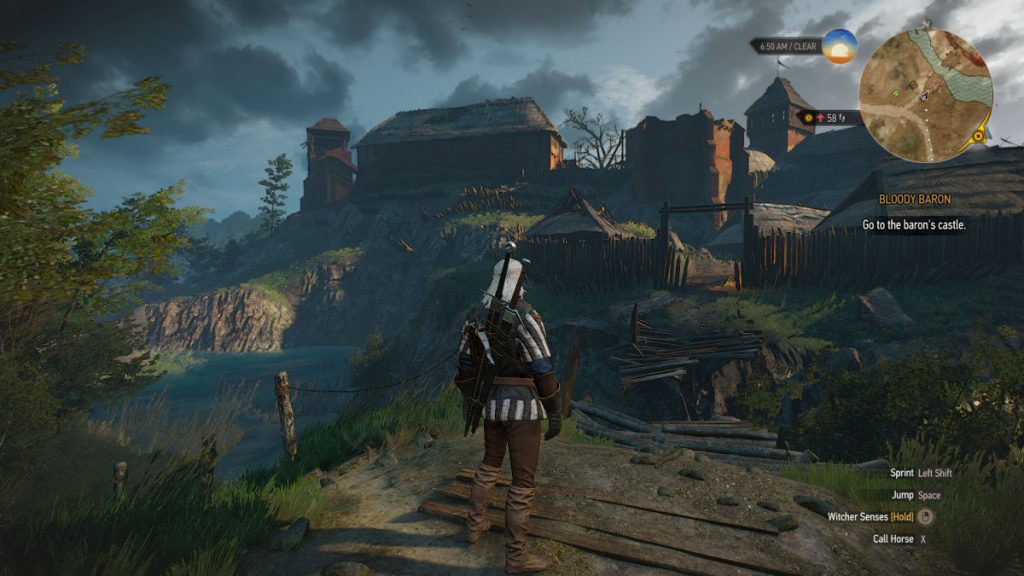 Geralt also has his horse, Roach, for the longer rides from A to B. I didn’t use her much, though. I liked running across question marks on my way to the next quest objective. The horse made for a lot of extra features, and not just with three riding speeds. It could get saddle bags for more inventory space, blinders to not freak out too fast when slaying monsters on horseback, and better saddles for more stamina.

Crafting mostly had to be done by blacksmiths and armorers, but alchemy was possible on the spot. A nifty detail I really liked was that after brewing the first potion myself (mostly using the tons of flowers picked up in the wild) Geralt would automatically refresh them after the next meditation. It made sure that alchemy remained mostly a study into new kinds of potions.

And the same thing with bombs.

So, how about the story? To keep it very simple, Geralt of Rivia (the person in your control) tries to find his adopted daughter Ciri. Lots of persons that knew something typically offered a chain of quests to do before they dished out information on Ciri. A baron in Velen even told it in such a way that I could play Ciri herself a few times. She had no signs to use – just a sword and an ultra fast dodge that almost looked like it was related to the “Blink” ability in Dishonored.

I’m going to try a new thing this time, however – I’ve decided not to go too much into the specific details of the story. It tends to make my blog posts too bloated and I have a feeling that the stuff about the gameplay and mechanics is the most interesting part anyway.