This was an excellent AGS cyberpunk adventure game, at least as good as (if not better than) Beneath a Steel Sky and Gemini Rue. After the fifth Broken Sword I thought I was through with adventure games, but this game managed to fondle gray adventure cells I thought had gone extinct. All it took was the right futuristic setting, the right story, and the right puzzles – along with great voice acting.

Part of the reason I liked this game so much was also that none of the areas (or chapters) were too big. Less than half a dozen screens and for the most part even less than that. The inventory was usually also small, rarely were there enough items to make a second page necessary. It made for a nice balance where nothing felt too difficult, yet it wasn’t so easy that I could just stroll along.

That being said, I never felt the need for a walkthrough.

It’s a funny thing about the retro style graphics because for the most part I’m not really that excited about them. I prefer modern, drawn graphics in a higher resolution, for example as seen in the Spanish Runaway adventures. I wasn’t too happy about it in Gemini Rue and Primordia, but for some reason it didn’t annoy me that much in Technobabylon. It’s possible that it was because I ran the game in a window which made the pixels smaller. Full screen wasn’t possible at first (black screen) and although I found an option to make it work anyway, I liked it much better in a window.

Another thing that helped was that the talking faces had multiple expressions. 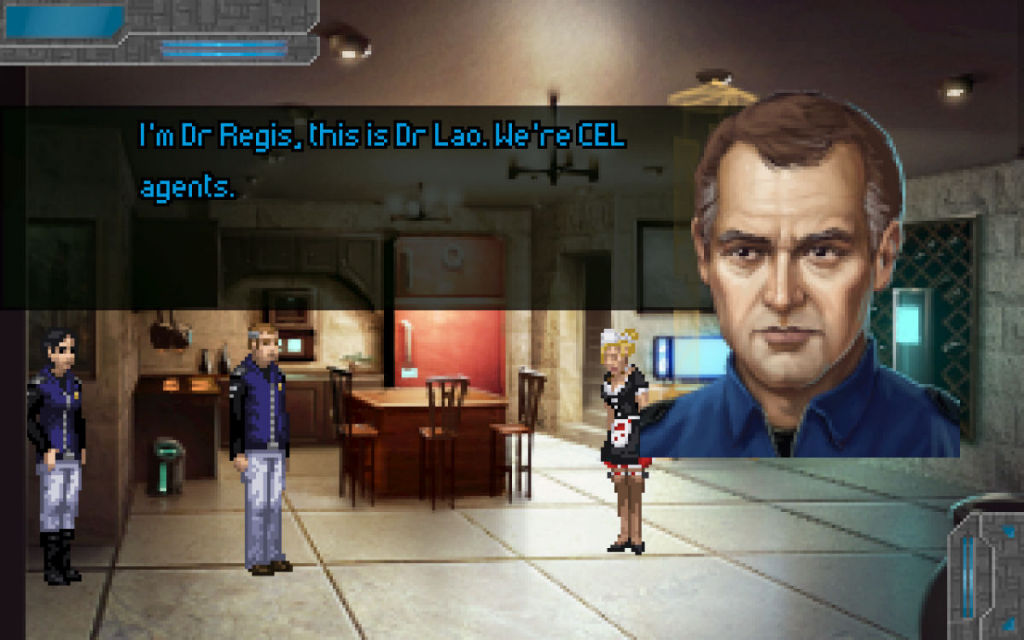 The story was about two CEL cops, the partners Regis and Lao, starting an investigation into mindjacking crime. A third character was Lathe, a poor thrall girl adept at trancing into cyberspace to solve puzzles, and the game alternated between controlling these three characters. The story and dialog was well written and interesting to see unfold, and it wasn’t always about inventory item puzzles. For example, sometimes I had to splice open a synth android and change its brain setup to get better dialog options, I could turn stuff on and off in terminals, and in the end game I even had to drive a small droid across puzzle platforms.

Some observations about the story and gameplay details. There will be spoilers in here.

I’m embarrassed to say that I was stuck on the first screen for longer than I’d care to admit. I didn’t catch at first that you could browse multiple e-mails and it was blocking me. Guess I was a bit rusty. 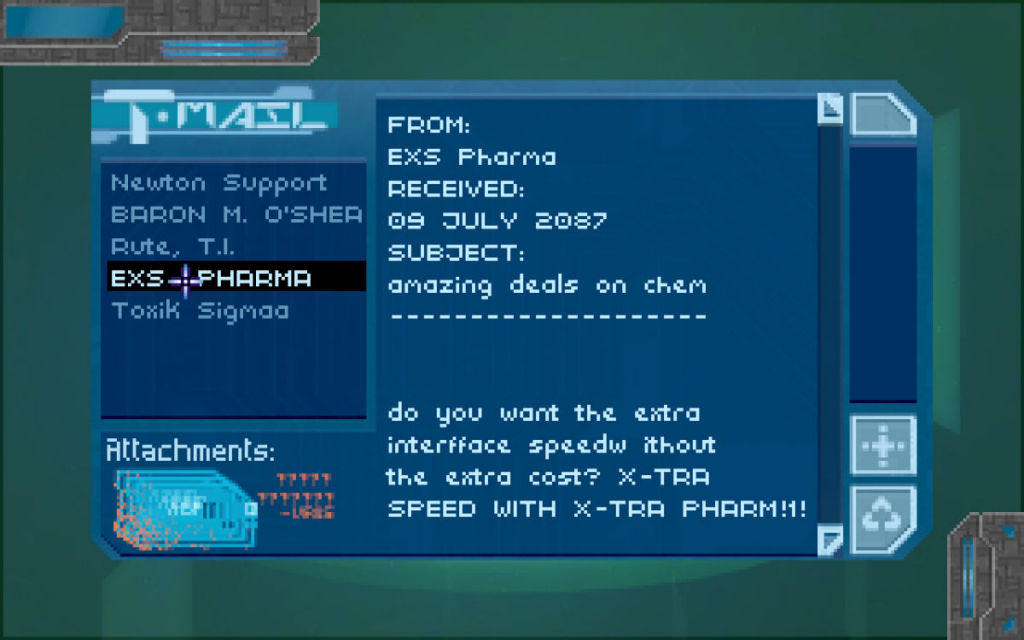 I liked the idea of printed clothes. Can I also have something like that too, please? Anything to avoid having to do my own laundry. A machine to spit out all new clothes and then throw away after use. If the quality is as good as normal clothing then what’s not to like?

I loved the way the cook AI pronounced “T.H.E.” in its jolly sentences.

I wasn’t shocked, but I had at least a gawking expression when I saw that body falling down on the street. SLAM! Unexpected indeed.

Nice idea with a scrambled DNA audio message where the last bits had to be found in plant DNA.

As far as I could see, there was never anything relevant to pick up from the news app. Not that I read all the stories there too much. I had a feeling it was just window dressing.

I tried the updated rock-paper-scissors game once and then never again. I’m not really fond of that game because it always reminds me that we humans are not as unpredictable as we’d like to think we are.

That animated screen with the car driving along towards the next destination dinged all kinds of awesome associations from the 80’s. 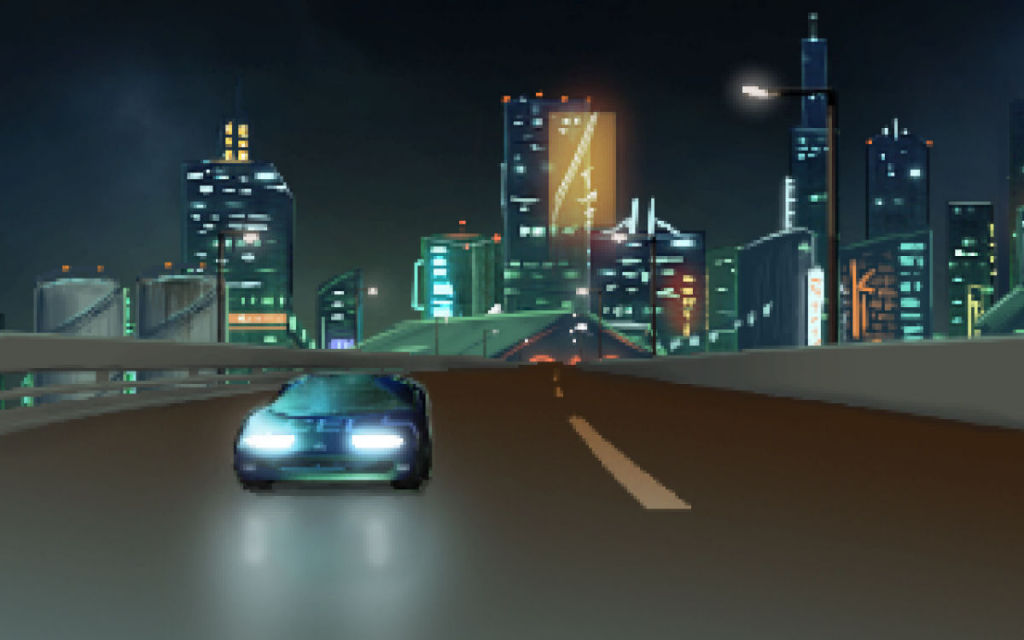 Nice touch with the laser set to drill through cement in order to zap into a neighbor room. I immediately figured out what the idea was and dragged the slider to this setting.

The blonde guy looked way too well-groomed and pretty to be the evil antagonist. I know we have men like Thomas in Downton Abbey, but I don’t know. That blonde guy just didn’t work for me as a bad guy.

I liked the tree on a balcony in the top of a skyscraper. Cozy place.

I chose to talk some sense into the train bomber, but he was killed by Central after being brought in.

Impressive how most of the users in the long telephone list had unique dialog. Most other adventure game developers would definitely had cut a corner there.

Was I the only one that was afraid that activating the bloody synth maid would make it attack my character, creating a fail state that would load me back again? Luckily it never happened. 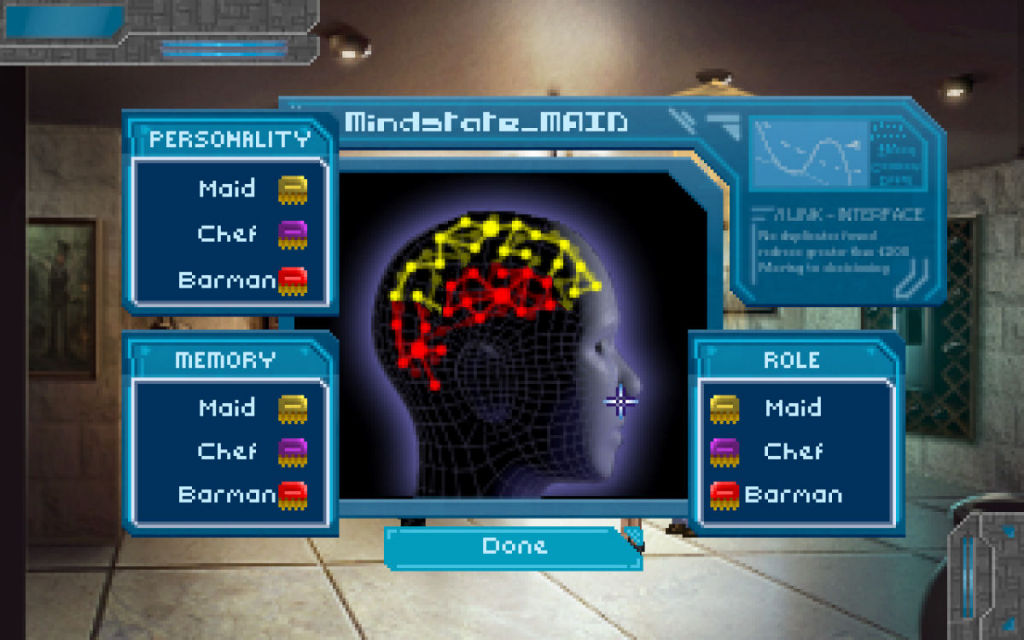 Similarly, I was afraid that planting the alien Xenofungus and seeing it spread at first would overwhelm the entire lab (maybe even the city) in no time, but it just kind of stopped.

Nice chapter with Regis solving all kinds of nifty puzzles to knock out or bypass Cobalt soldiers. I even had to walk in sync with an assembly line to avoid getting spotted. Shades of Deus Ex in this section.

There was a cyberspace section where the thrall had to make other users go offline. It was weird having a map of the online world with countries to turn off that didn’t do anything at all. What was up with that? I had to use all other kinds of puzzle tricks to get the users offline which was all right, but the map looked like the kind of red herring that didn’t seem to fit the style of the game.

Maybe it was supposed to have been used for that, but was eventually cut.

I was afraid at first that I had to do that “GravBall” section (a Tron-style ping-pong game) as is, where it was quite difficult. Even so I actually managed to get a point a rare once in a while. After injecting the real world sleeping person of the player, it was a walk in the park. I saw afterwards that there’s an achievement for winning the game without injecting him. Good luck to those going for that.

There was a simulation where various nuclear disasters could be observed firsthand. Okay. I’d like to have this simulation ready for whenever I get some VR goggles one day (if I ever do, that is). 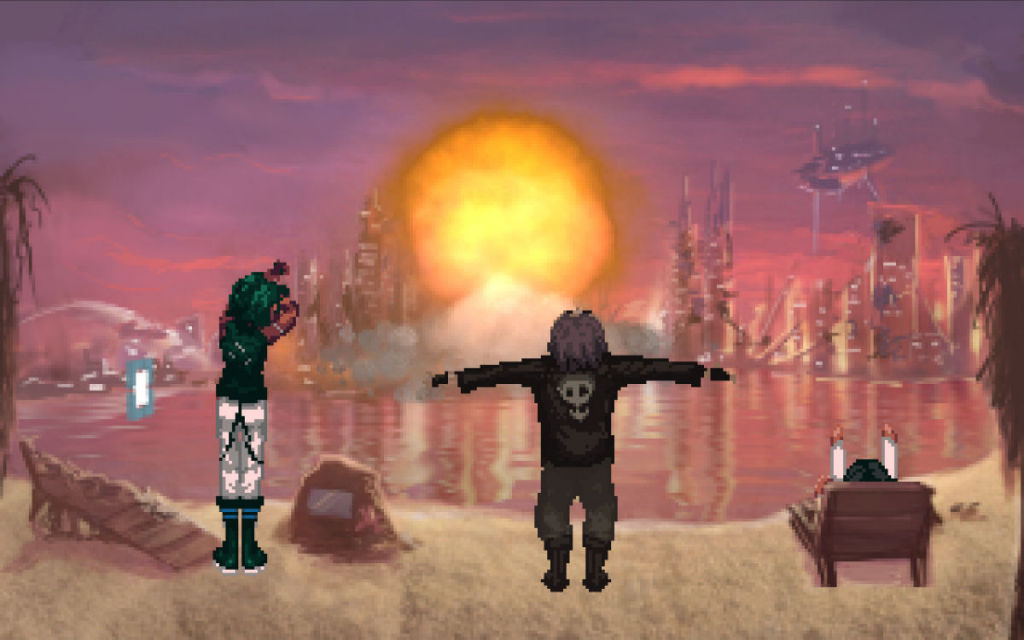 Another chapter in control with Regis turned into a “whodunit” investigation after a bomb went off in a restaurant. This was another place where I was happy there were only about 4-5 screens or so. In other adventures there might have been more screens, making it hard to avoid getting stuck.

Awesome sequence with the thrall girl suddenly popping up in her own apartment again, then having to remove the walls to view static noise. At first I thought I had gone through a completely game changing sort of “Matrix”-moment here. It was almost a shame it didn’t follow up on that idea. She had just been strapped to a lab bench after falling unconscious.

I was slightly stuck in the aerostat until I saw the pipe that Lao could use to traverse the hull.

In the tenth and last chapter, it was possible to swap between all three characters. Regis and Lao had a lot of overlapping regarding what could be done in the tall AI tower, but Lathe was the only one that could use a trance chair and do stuff from the cyberspace side. 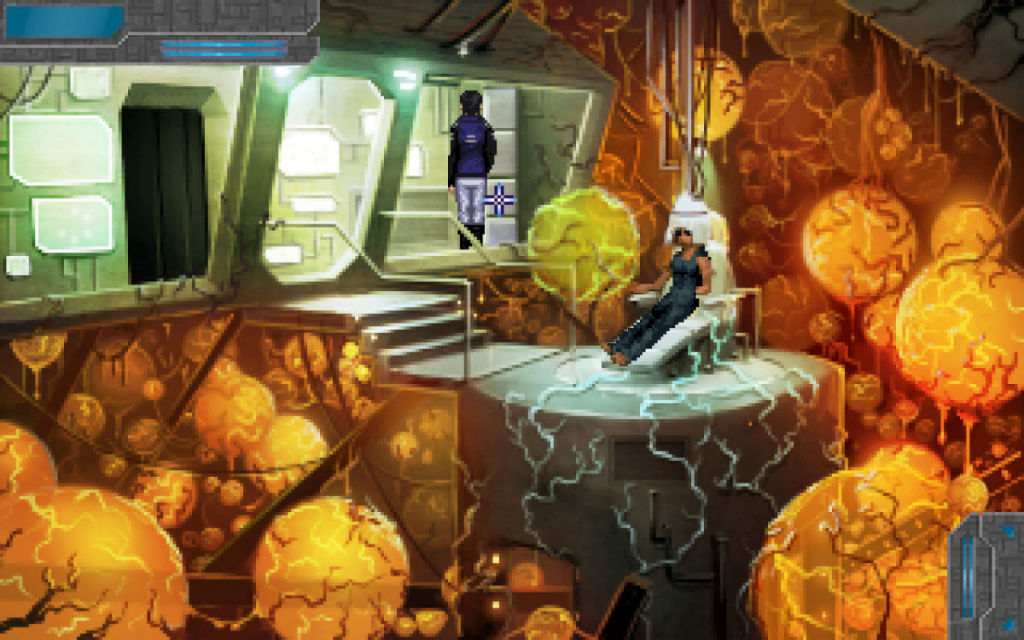 Lovingly easy platform puzzle driving a small droid equipped with a grenade. It’s not that I can’t do the tough puzzles if I have to – after all I did complete The Witness – but sometimes it’s relaxing to deal with easy puzzles like this. It doesn’t all have to be Mensa level.

The part where I had to turn off two power conduits was probably the spot where I was stuck for the longest time. The first power conduit was easy to spot but I didn’t catch the second one between two floors for quite a while. I kept thinking that I had to do something in the turbine room – after all, it had been involved in an earlier power puzzle. That I could stop the elevator with a spanner only made me think that I had to sabotage it to keep Galatea from escaping once we got to her.

I chose to knock out the mindjacker in the dark, and I sided with Central. There are two endings – in the other ending I could have sided with Nina instead.

After completing the game I discovered that not all of my save games in the final chapters were there. I’m not sure what happened but the way the save games were spread out, either it had disallowed them to be too close together in time or I had hit some sort of file count cap. It was a shame because I wanted to check out the second ending but when I discovered how far I had to go back, I couldn’t be bothered.