As soon as the small starter area opened up its gate, the entire island was theoretically open to me. I could go anywhere at all. I chose to go to the left as I noticed a nice cluster of panels over there, and I discovered that these clusters of panels (of typically about half a dozen or so) were learning panels. They introduced a new rule and started with the easiest maze. Solve that and the next panel has a slightly more difficult version. I really liked this idea of learning panels and the two sets close by made it possible to solve all the real puzzle panels further down the road. All but one of them seemed relatively easy to solve.

The one that eluded me was just typically me having one of my “nemesis puzzle” moments. After solving it, I couldn’t understand why I had such trouble with it. Must have been a brain fart.

But solving that first “real” area activated a machine that shot a laser beam up towards some sort of mountain in the middle of the island. I arrived there much later and found a control box that revealed one of seven laser lights now done. Guess I just discovered the goal of this game.

Unfortunately, I’m not quite as full of praises regarding the gameplay after having switched on the first laser beam. To be honest, the completely open nature of the game kind of works against it at first. It was too overwhelming and clearly felt like lacking some sort of direction. First I stumbled upon a lot of panels with strange symbols I didn’t know how to deal with. That in turn made me hunt for more learning panels, but they seemed to be scarce. Finally I found a set by a red pool and learned how to deal with Tetris bricks. I even managed to solve most of the puzzles in the woodwork section, but it only opened the first half of a panel with one wire for each of the two side covers.

And that generally describes much of my ado on the island this first session after the first laser beam. Lots of solving something or other two thirds of the way but not getting much out of it in the end.

The rules of the puzzles were quite varied and again shows Jonathan Blow’s resourcefulness when it comes to designing puzzles. There were symbols for splitting up maze fields, forming Tetris areas, for removing other symbols in a surrounded maze area, dual lines, and much more. There were even sections inside a castle where I had to walk on pressure plates to actually draw the line on a panel nearby.

Another area had lines drawn out as a tree and I had to choose the branch that matched something nearby that I won’t spoil too much. It was refreshingly different, but the last tree panel broke the rule by not having the natural indication at the ready nearby. I had to use trial-and-error to solve that one, and each failure meant having to run back to the previous panel and repeat the procedure there to light up the wire to the final one. It didn’t feel like an awesome twist, but at the same time I wasn’t really surprised. I somehow expected that they would come up with something like that.

I also opened two small chambers today, each guarded by a panel with a gray background color. Each of these chambers had a small cabinet that revealed a piece of paper with a hint about how a line should be drawn on a panel with hexagonal fields. The paper looked like it came out of an old printer. I managed to use one of these lines in an underground cavern, and the reward was a video clip in a small cinema. The clip showed a woman babbling on about a philosophical topic, but I wasn’t interested. 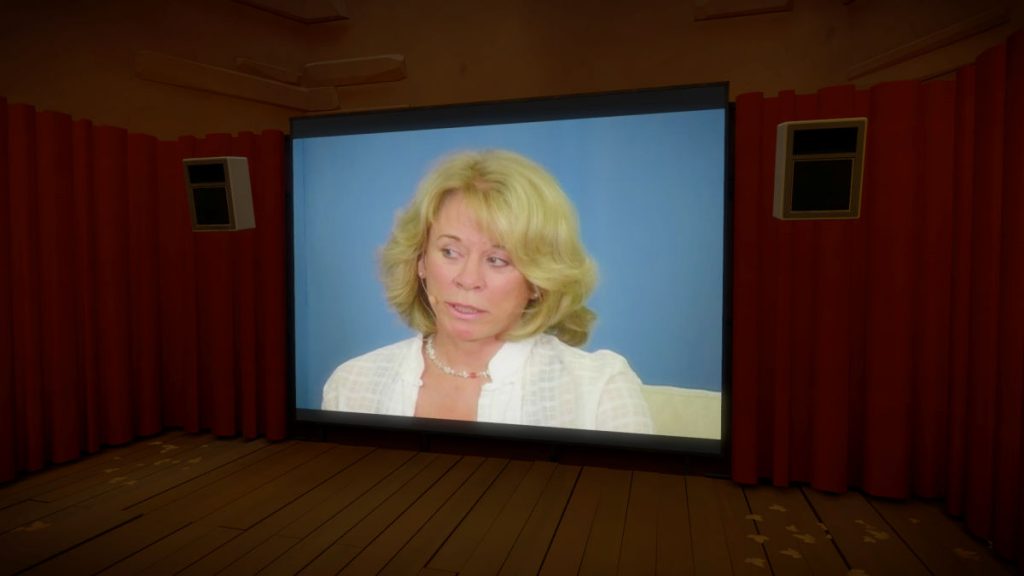 I had my head geared towards puzzle solving, not grasping TED talk lectures.

And that was also one of my biggest complaints about the game so far. Remember how I mentioned that I didn’t care much for the pretentious story in Braid? Unfortunately, The Witness continued that trend with long narrative quotes much in the same vein. There were stone statues of humans on the island in various poses (as if frozen by a Medusa long gone) and I sometimes found a small “tricorder” next to them with a button to push. Activating it would play back a quote, typically concluded with author and year.

I had sort of the same problem with that as I had with the narrator in Bastion. I couldn’t concentrate about what was said while playing the meat of the game, and I didn’t want to just stop up and listen to what felt like more or less intellectual nonsense.

One quote activated on the top of the laser beam mountain went on forever. I even started wondering if I would now be cursed with having to listen to that blather for the rest of the entire game. It was so annoying that I had to turn off the subtitles just to get cleaner screenshots.

The 3D engine and the design of the island was very colorful, varied and charming. There was no music and I was missing the presence of birds chirping and flapping about, but at least the wind and the sounds of the machines I activated were excellent. As I moved about the island and solved panel puzzles to lift a platform or activate an elevator, it really hit me how much the game felt like a spiritual successor to Myst.

This was like taking it to the next level – a genuine attempt at modernizing this particular genre.

That the game didn’t have any story line didn’t bother me at all. The only thing I knew about the protagonist was what the subtle shadow in front of me could tell me. Some would probably complain about all of that missing, but there’s already a ton of games with stories and cut scenes and drama and explosive set pieces. It was nice just to be alone on this island for once, with no agenda other than my own curiousness as to what will happen if I light up all those laser beams.

Sometimes I was yearning for a teleporting kind of spell to get around on the island, but at least there were boats to sail around a scenic route to a different harbor. But although it had a speed dial, it still took a bit too long for my liking. Some kind of teleportation would still have been nice. Especially with all those invisible walls to prevent me from either falling down or accessing an area without solving the qualifying panels on the doors leading into it.

On the other hand, I really liked the save system in this game. No options, just auto saving right on the spot. Load the game and there you are, exactly where you were the last time. I wish more games did that, but of course it’s technically easier to do in something like The Witness since the developers doesn’t have to worry about all kinds of creatures running about, complicating variables.

2 comments on “The Witness: First Impressions”