Spoiler warning! I will pretend that you have already played the game.

This game was so permeated in atmosphere it was almost dripping from it, but it also helped that it was the very first game I played on my new 32″ Acer Predator XB321HK monitor, and in 4K of course.

It was very similar to Limbo, the previous game by the same developer. So much so that it almost felt like Limbo II. Again it was a platform puzzle game mostly scrolling to the left, and again I sometimes had to run for my life from evil men in a story without a beginning. It even started in exactly the same way – here’s the kid; now go. No backstory or tutorial for you. 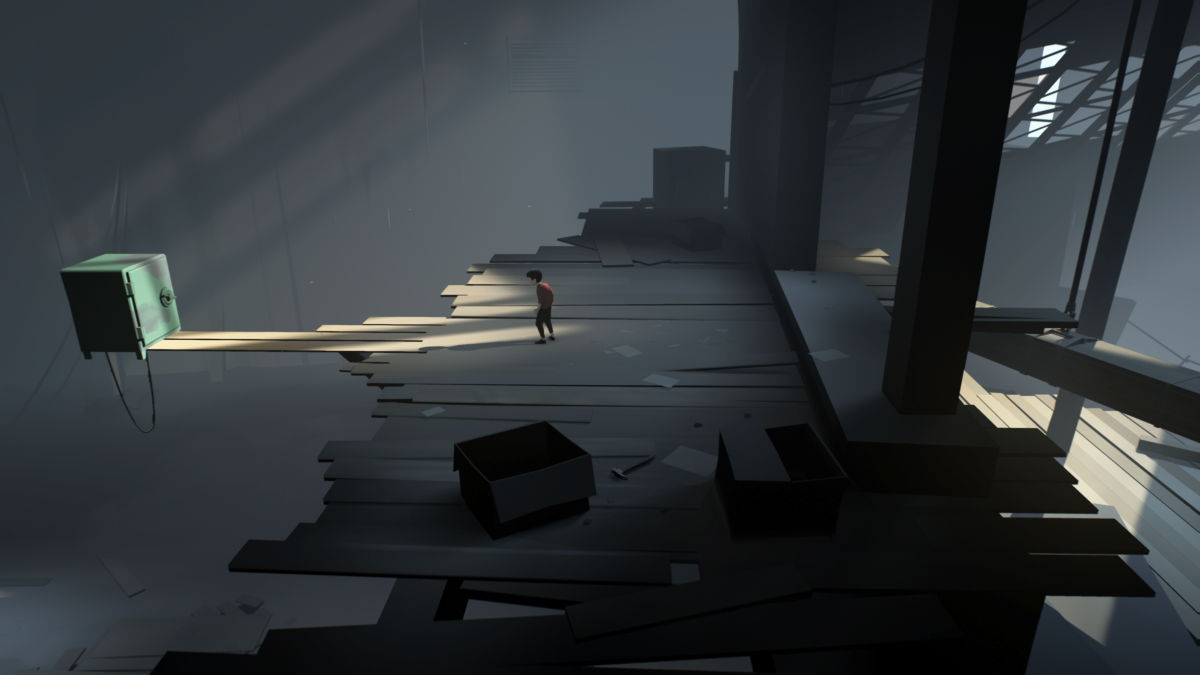 Where Limbo was almost all black and white, Inside had a very faint use of color. The kid in my control was wonderfully animated, especially considering that he didn’t have a face. Music was rare. Most of the time it was a humming ambient sound to complete the feeling of an amazing atmosphere. And the controls were incredibly sparse. Move, jump and interact. Sometimes interacting in a direction.

It seemed slightly easier than Limbo and had even more ingenious puzzles. A commonly repeated theme in the first half of the game or so was a yellow brain helmet, usually hung down in a wire from above. As soon as the kid jumped up to hang down wearing it, I could control previously dormant humans in the scene like mind-controlled zombies. All movement was repeated by the kid as he was still hanging in the air. It made for wonderful puzzles. Sometimes I had to separate or huddle up the humans in a specific way to open a gate or stand on the right pressure plates.

One of the cutest of the unique puzzles was one that started by small chickens conspicuously piling up around the kid. These had to be lured into an air-sucking machine to punch a bale of straw down from a rafter. Good for reaching a ledge. 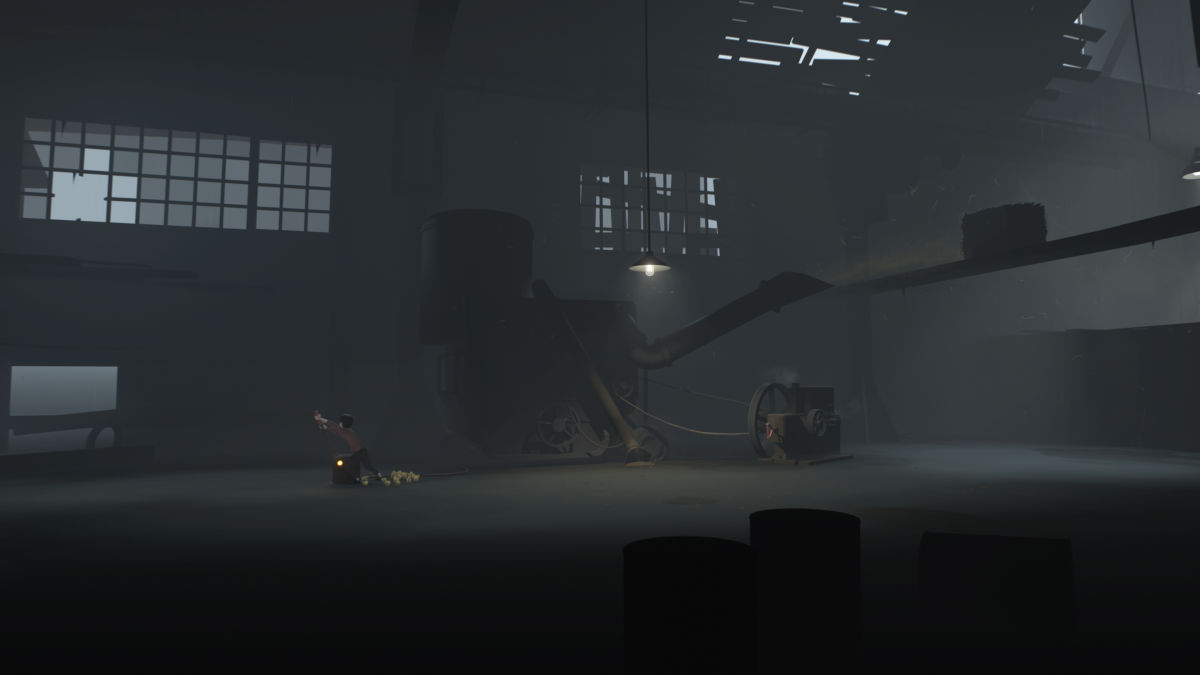 And in case you’re wondering, no chickens were harmed in this puzzle.

Blocks and carts could be pulled or pushed, and the kid broke a side-scrolling rule by being able to pass by them instead of jumping over them. It was a nice touch that made sense. It was also possible to climb or swing in ropes or chains, swim underwater, stealth past objects to avoid detection from searchlights, slide on sloping roofs, and at one point I even controlled a spheroid submarine that could turbo boost.

But it wasn’t devoid of having to fail some puzzles before learning how to solve them. Most of the time this was tolerable, but there were the usual exceptions to the rule.

Some of the most frustrating moments in the game usually involved having to swim away from a girl with long, dark hair. She looked like a clone of the girl from the Ring horror movie and could swim faster than the kid. If she reached the submarine, she cracked the window. If she reached the kid, she dragged him down to die from drowning. There were lots of getting out of the water in just the nick of time, and sometimes I had to somehow lure the girl back. 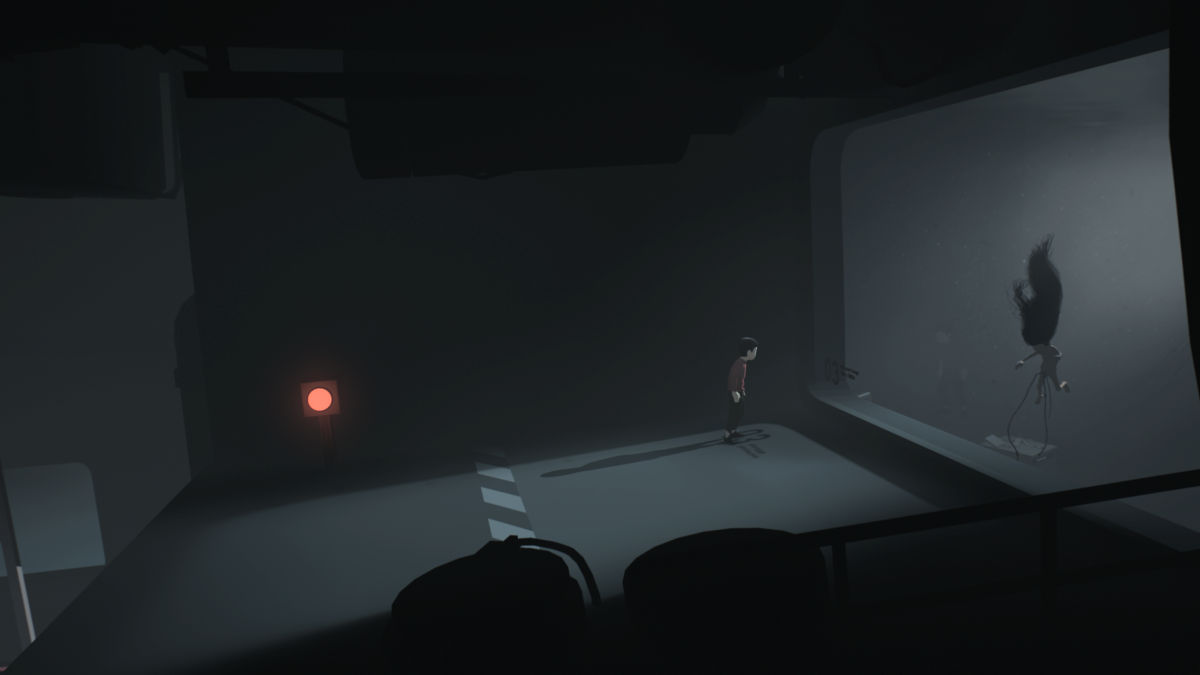 At one point I even had to use a hanging chain sliding in a track to barely touch the water with the feet of the kid. This was enough to get the attention of the girl and make her swim back far enough for me to reach an underwater door later. This one took me quite a while to figure out. I kept trying to swim and jump to reach the chain instead.

One very odd deviation was that a scripted breaking of a ledge made her grab the kid and bring him down as usual, but this time without fading to a restart. Now the kid had sort of a plug put into him and he could now breath underwater. Then she swam away.

Why the hell didn’t she do this earlier, instead of just drowning the kid!?

Sometimes one or more dogs came chasing after me and I had to outrun them, dashing for a door or a ledge. Later, I had to be more cunning about them. Usually this meant running forth and back a few times to make sure the dogs wasted too much time running around the scenery. I was also chased by a pig at one time and had to jump on it. After luring it smack into a wall, it was knocked out. I then dragged it back below a hanging rope for me to reach. 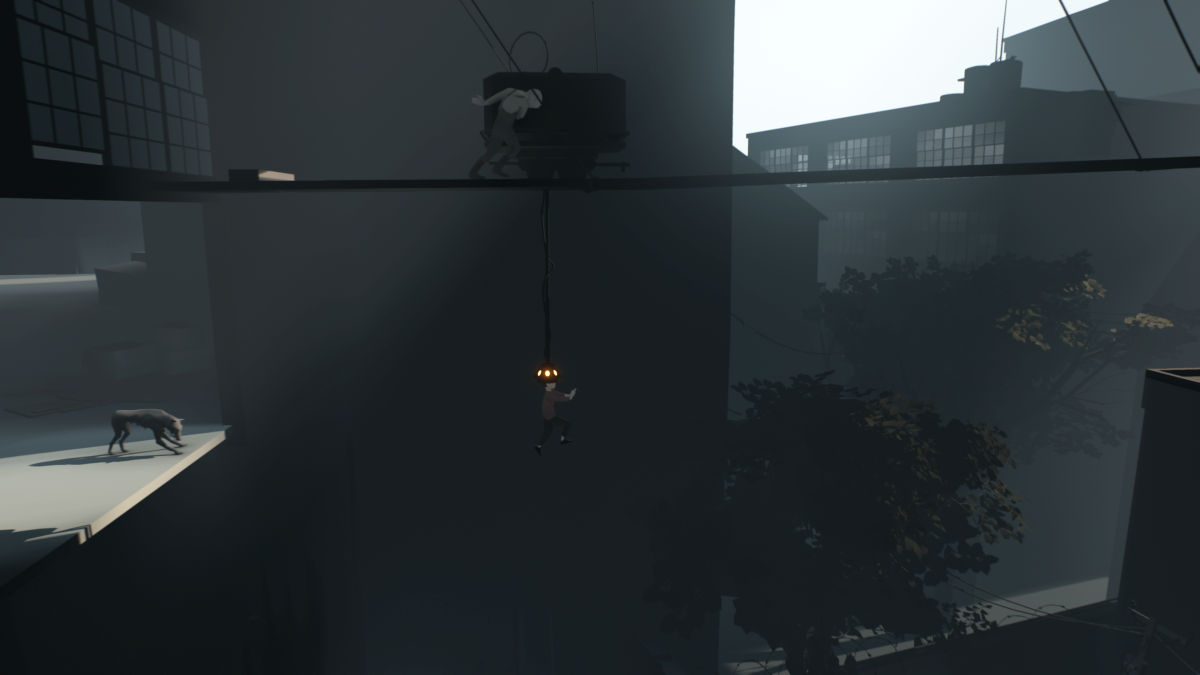 Apart from the obvious use of cover during stealth sequences (like e.g. avoiding baddies, dogs or even searchlights) there was also sort of a related sequence taking place after having gathered no less than 19 zombified humans to stand on a pressure plate. This opened a big door to a place where something was booming in the distance, creating gusts of wind or waves so powerful it could shatter the body of the kid in a second. I had to use moving cover or machinery to avoid this fate.

Whatever was booming like that in the distance remained a mystery. I liked that.

As always I found one easy puzzle that didn’t click with me. There’s always at least one of those in these kind of games. It was about having to raise or lower the upside-down water in a chamber, lifting a box that only floated up as soon as it was engulfed in water. I just had to place it at the highest platform and then jump up and into the upside down water to solve this one. Until I realized that, I tried silly things like blocking the waterproof doors or even jump from the box while it was transitioning.

In the second half of the game, the brain helmet puzzles were kind of replaced by just meeting groups of zombified humans that followed the kid and his obviously magnetizing personality. They could usually help giving a push for higher jumps or catch me dropping from high points. 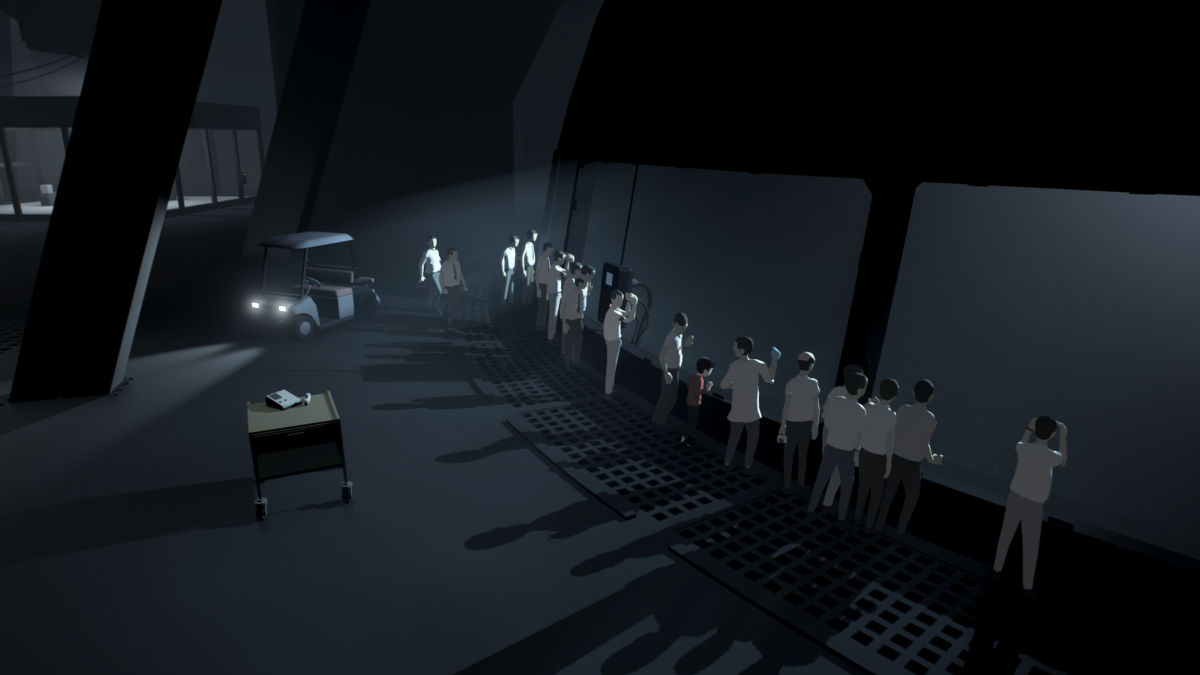 And then as the kid swam up inside a secret water chamber overlooked by an audience, the prodigious endgame occurred. The kid sort of melted together with a giant blob of humans with arms and legs sticking out. I now controlled this big blob for the rest of the game, which was about 25 minutes.

It was pure gaming heaven.

The blob tumbled around like a gooey ball, moaning and panting, and it easily smashed through doors and windows causing a ruckus of flying glass and furniture. All heavy doors could be lifted and the dogs could be totally ignored. Later a few puzzles even occurred, typically helped along by one technician that we could fling something up to. I also had to get a wooden box on fire at a furnace and then hurl it up beyond pipes with water spraying down. It required precision, but it wasn’t as bad as it might sound.

The big sequence of the blob fleeing the facility ended with us smashing into the woods, tumbling down the hillside like a snowball, then finally resting on a beach. Now what? Nothing. Just credits.