This was a third person puzzle game with inspiration from games such as Portal and Fez. At times it also felt like a distant sibling to Tron 2.0. I controlled a robot finding my way through chambers of blocks. A hub area filled with blocks led to secluded chambers where I had to puzzle my way to an exit door.

There were three major areas in the game, each concentrated around a hub. The first was dominantly blue with square or rectangular blocks. The second was more cyan with pentagon blocks. And finally the third was blood red, surrounding a big structure with ability-draining fields that had to be turned off. 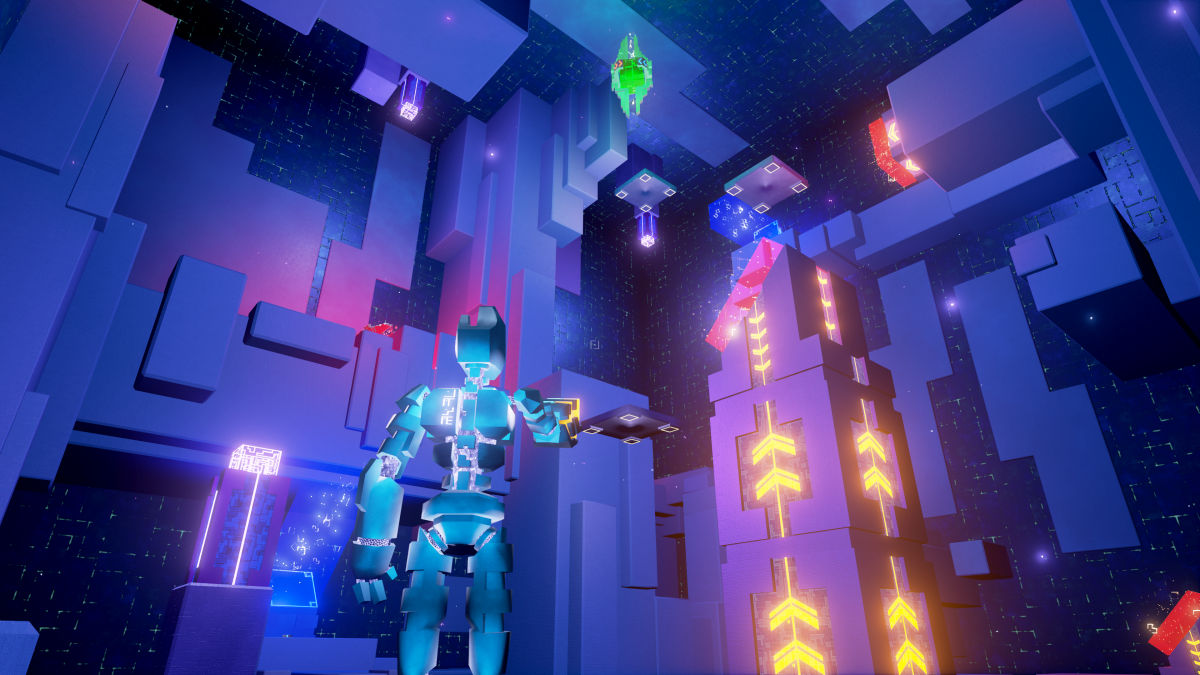 The robot could shoot orange or blue energy from each hand (mouse buttons) and jump on the blocks. Red jump pads boosted me away or blue gravity wells sucked me in, and their type could be switched with a shot. Later, blocks and platforms also floated on beams. Platforms of this kind had a certain pattern they went through, while the blocks could be started and stopped with a shot. Smoldering platforms were also used although thankfully sparingly, as they disappeared in seconds and always made me frantic.

And in the later areas, there were passages with a green ground fog that prevented jumping.

The secluded chambers always involved floating objects that could be shot to move the entire room around its axis. Magenta objects rotated it, with me falling to what was previously one of the other sides. Green objects swiveled the room sideways. A specific type of floating white pads were not affected and this could change how I lined up to reach something. The magenta rotators were rotated too. Unfortunately my shots had a limited distance, so if a rotator was too far away, I had to make some of the way up there.

I actually had trouble figuring out how to puzzle my way through the rotating rooms in about two thirds of the game. I’ve never been good at rotating objects in my mind. In the last third, I warmed up to how the rotators showed color arrows corresponding to my energy shots, then trying to figure out where to stand before rotating everything. Still, there was a lot of trial and error involved all the way through the game, and in the last half of the game the developers left little leeway for deviations. 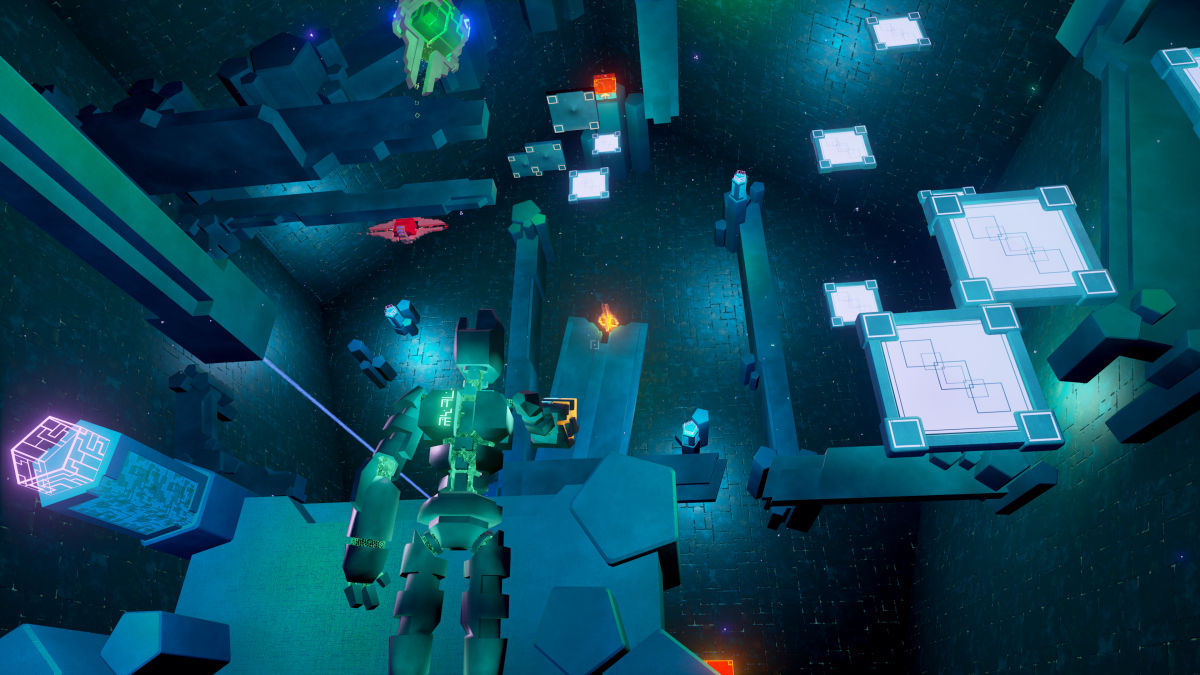 To make matters worse, I also had to make sure the rotating room was somehow lined up with the exit door. This door showed a red light when it wasn’t. Sometimes I managed to rotate and jump around to the ledge with the door and then shoot the green swiveler a few times to make the door go green, allowing me to pass through. This was fine most of the time – I sort of got used to it being part of the routine.

But there was one exception that was absolutely not cool.

The exception was a room with four holes in each corner of the ceiling. First I had to rotate and swivel to jump up there, then enter the top room through one of the holes by stepping on a red jump pad. The next chamber was about the same size and I puzzled my way to the exit door in the ceiling. It was entered by switching a pad to red jump mode, after which I was boosted into a small corridor with another door.

This door, however, was red.

I trying repeating this puzzle many times, swiveling and jumping myself dizzy, but the door was always red. Then I noticed that the bottom chamber actually wasn’t in sync with the upper one whenever I shot a green swiveler in it. After lunch I then tried shooting a swiveler below by aiming through one of the four corner holes. It was very difficult to get at clean shot and felt like it wasn’t what I was supposed to do. A lot of shots to get this right. After a few failures, I discovered that two blue energy shots at a green swiveler through a corner hole lined up the top door in the upper chamber so I could finally escape. 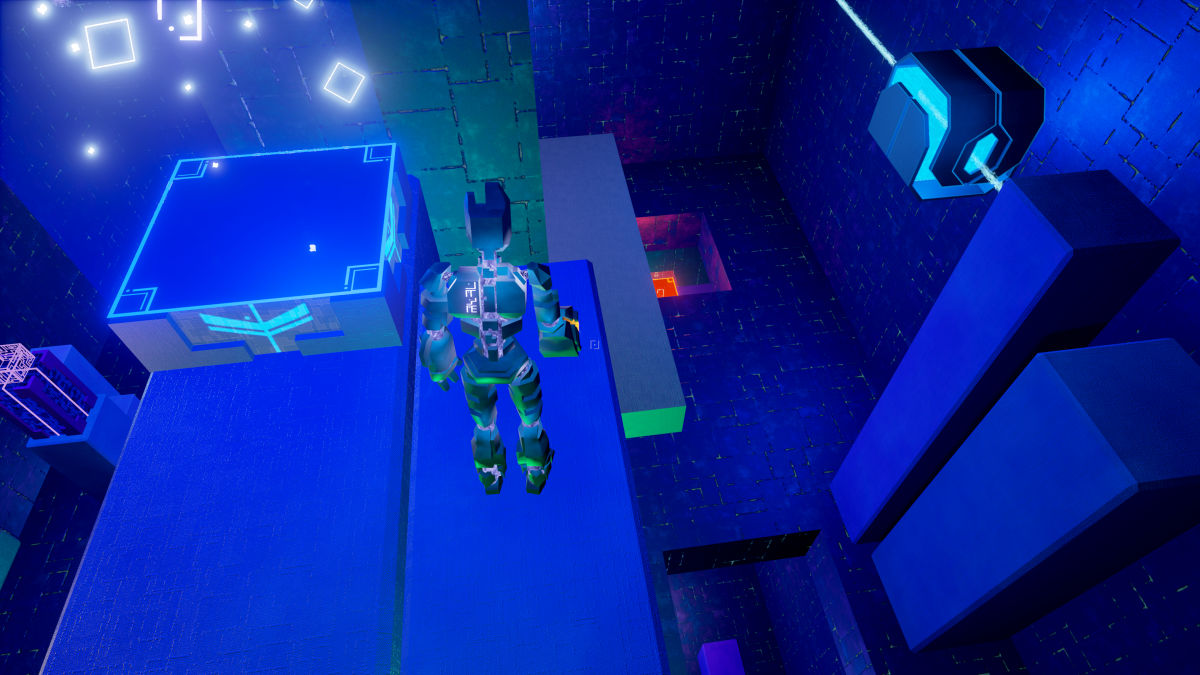 If this was really the way I was supposed to solve this puzzle then it was not designed well at all. But truth be told, I have a feeling that the developers designed this to be puzzled in a different way. My guess is that other players might puzzle their way through to the exit door and it all just went swimmingly.

To be absolutely fair, I was actually impressed for the most part about how most of the puzzle chambers had new jumping opportunities almost no matter how I manage to rotate it around, and it looked like they had made sure it was impossible to get stuck. But this too, had one ugly exception. In one of the chambers in the third red section, I managed to tumble it around in such a manner that I got stuck in a small “U”-tunnel that was designed for a different orientation.

I had to reload a checkpoint and then remember not to do that again.

Staying with the cons for a bit longer, I was also confused at the way the game started. Here’s a robot in your control. No prologue, you’re just there. No, you can’t read the sub titles in the bottom of the screen for no apparent reason. It was only after finding a few rare control panels with a hand symbol to click that I got the idea. Translation letters started emerging below the sub titles. As I found more control panels, words and sentences starting making English sense, but even so it took a long time until it occurred to me that the blue text was uttered by the robot itself. For a long time, I thought it was two AI talking to each other and I was just listening in as the mute robot. There was no voice acting in the game.

There was a lot of jumping. I normally don’t mind this (actually I loved it in the old video game days) but it felt a little imprecise here. Too much under- or overshooting. And what was up with how turning the robot sideways revealed faded “ghost” images on the background? At first I thought it was a graphical glitch. 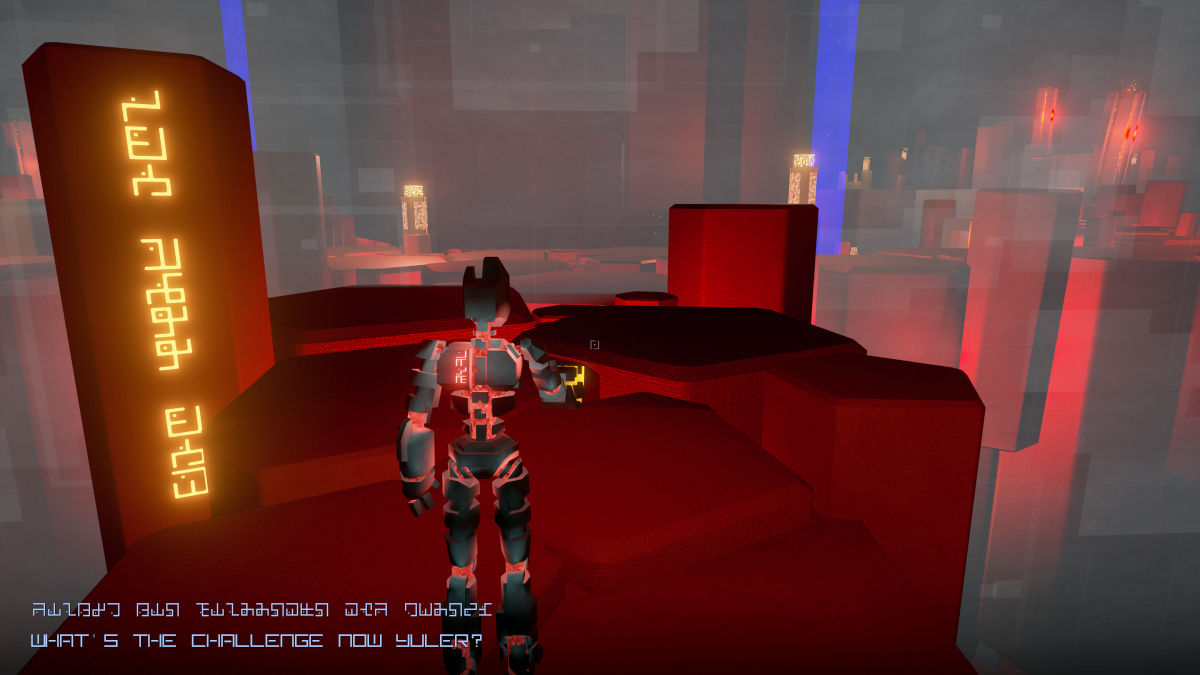 But in spite of these shortcomings, I still persevered and completed the game. The blocky atmosphere was enticing, especially in the enormous hub areas with multiple exits to puzzle chambers. And the music was damn cute and soothing. The game had two endings – I chose the engaging one, of course.

By the way, I got that dialog box “negging” on Fraps again just as it did for Pneuma: Breath of Life. So, it’s actually a piece of middleware reporting this? Spooky.