Played a few hours of this one.

It’s a colorless puzzle platform where only stuff being lit has substance. Darkness means falling and dying. The goal is simple – reach a door somewhere else, and sometimes bring a key to unlock it too. To help me out with lighting I can bring light orbs, place them in pedestals that sometimes move the orb somewhere else, turn hinged spotlights to shine elsewhere, and more. No enemies to dodge.

And sometimes I had to swim through water, but no oxygen was required.

After a brief tutorial with a four-legged creature, I came to sort of a hub with a choice between 3 x 24 doors with levels. Some static, some bigger and thus scrolling when needed. For each hub, the creature turns into someone else. One looks like a miner, one a woman, and one a small girl that even starts out in her room in a house. Music was much better than I expected – no chiptune stuff here. 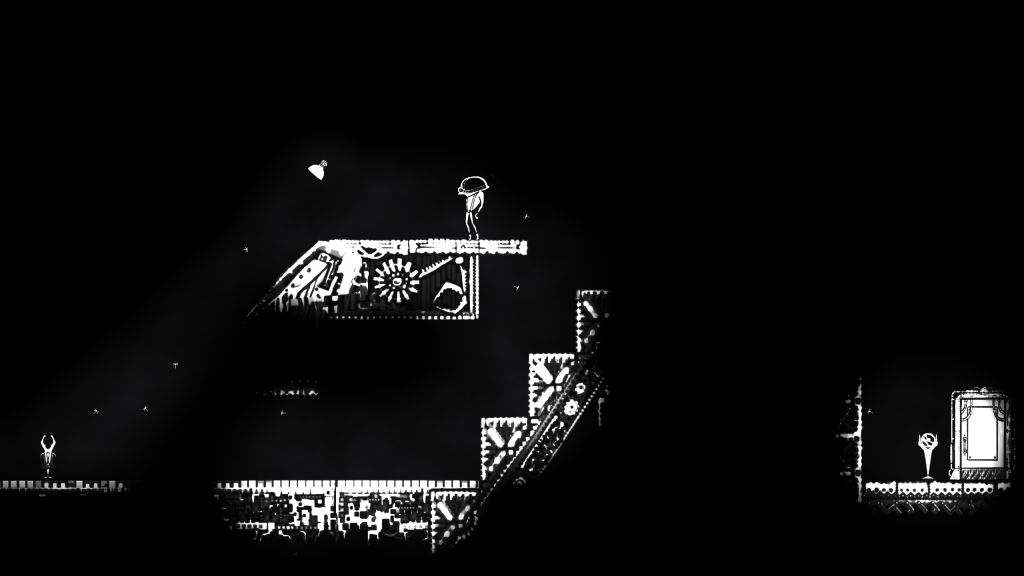 I had trouble running it in 3840×2160. It showed a quarter of the screen with menu controls out of reach and I had to edit a configuration file to fix it. I then settled with a resolution of 2560×1440.

Most of the levels were reasonably easy and could be completed in a minute while some had me stumped for a few minutes. The game had a creepy atmosphere and I was constantly afraid of exploring with a light orb and suddenly falling. Hitting a lower level never meant death (no matter how far down) but falling into the black abyss meant retrying. It was also possible to lose a key or a barrel, forcing me to restart.

One thing I thought was very cute – definitely the charming gimmick about the game – was the way I could walk or stand on wall structures that were only partly lit. Because the continuation of the wall piece was in darkness, it didn’t exist and I could pass through. It took some getting used to, especially when having to follow an orb transitioning to somewhere else.

I never found out what the clock I sometimes found meant.