Completed this one yesterday. It was short – just shy of two hours.

It was a marvelous underwater diving adventure, swimming among fish, whales, squids, jellyfish – all the ocean can offer, and lots of it. I was often more or less engulfed in an explosion of color and life. It was also very easy. If it didn’t happen 99% underwater, many might call it a walking simulator.

Apart from exploring the oceanic areas, I could free small bots that could later help me remove an organic net to a passage. I could click on ocean floor pools to free a specific species, or collect shells. Even meditate on a statue. The only action marginally resembling using my brain was that some areas needed me to use two gadgets to open a door. Typically spinning chains attached to each side.

Sometimes I could also hang onto a larger creature for a bit of speed (usually wasn’t much of an advantage) or hit schools of fish in the flow of a tunnel. These tunnels popped up between areas from time to time. 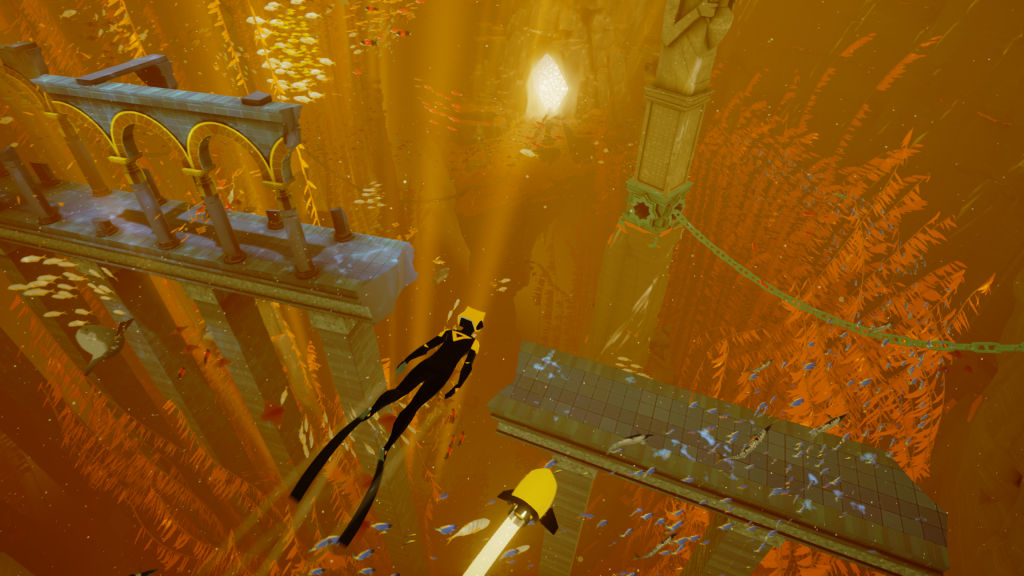 One thing that surprised me a little was that it actually had a shred of a story and purpose. It wasn’t just an ocean floor simulator. I found portals leading to a ghost temple where offering a light sphere grew a coral stalk and opened a door, I started encountering mechanical triangle structures, and I even befriended a big white shark. It was all subtle and fit in well with the rest of the game.

Except perhaps the exploding triangle mines. I could have done without those.

Apart from the nature of our hero – which I won’t spoil here – probably the biggest surprise in the entire game was that I could get up and walk around in temples toward the end of the game. Not much – typically just to activate something and then back into the water. But still. Didn’t expect that one.

The music was absolutely flawless. Symphonic and often with choirs. Sometimes the strings reminded me of old Tomb Raider games, at other times I thought of the adventurous encounters in The Abyss.

I completed it using a mouse and keyboard. Sometimes I fumbled up and down, but otherwise it was fine.