This was a first person adventure game with more or less surrealistic vistas, and puzzles typically involving moving and dropping “nerve clusters” that looked a little like tumbleweeds. How to use these balls is actually a spoiler, so as always I will discuss the details of this in the spoiler section below.

It took me about 4½ hours to get through it and I liked a lot about it. Especially the way it looked. Just like Deadfall Adventures, the level environments and the graphics were definitely the high note of this game. A few levels were even so pretty it made me forget myself for a minute or two upon arrival. Puzzles were for the most part okay, but sometimes involved some traipsing – and there was no sprint button. It also had a smell like being a borderline mod for an FPS. It had a very basic title screen and there were glitches. 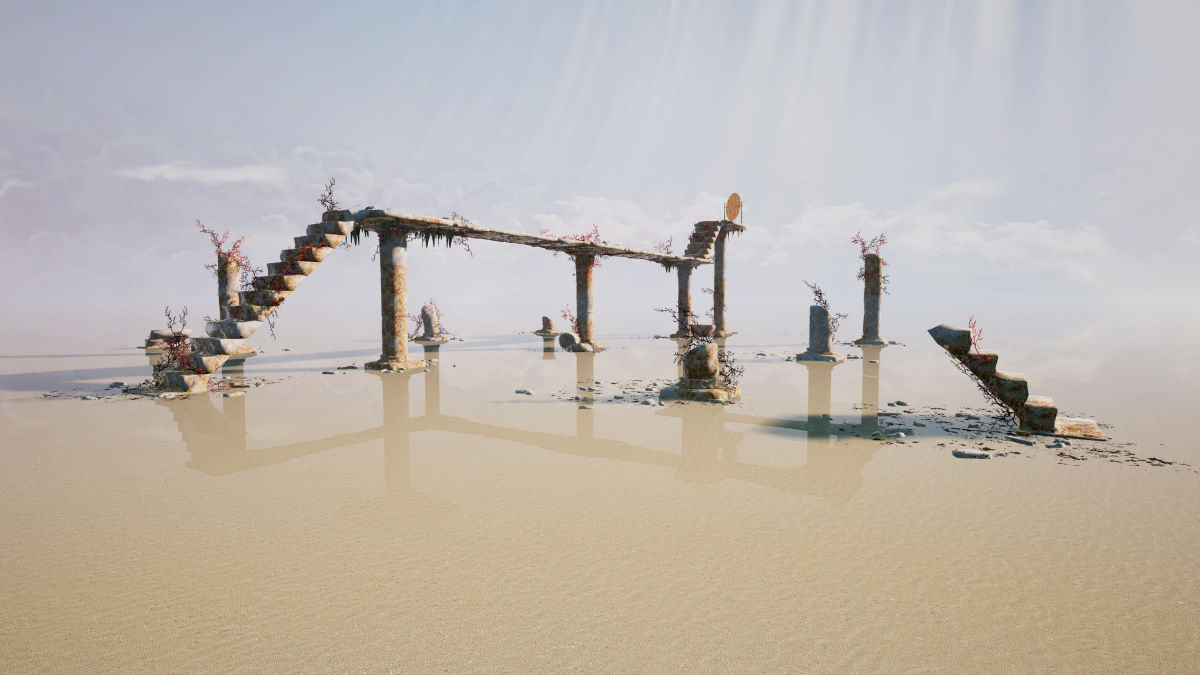 But even so, I still had a good time completing it. The idea of using the balls was cute and made for relaxed puzzles, apart from a few overdone exceptions that I will mention in the spoilers. If I went back in time knowing what I know now, I would definitely play it again.

Another detail that added to that smell of an indie game bordering on being a mod was the lack of a save system. It didn’t hurt as much as that may sound as the title screen had a chapter selector including sub chapters, and if you know what you need to do, it doesn’t take long to get back on track. But still.

There was no menu when hitting escape, either. I had to hold the key down for a few seconds while the screen faded out, after which I was just brought to the title screen. Talk about cutting a corner there.

Sometimes I came past a cloud of dots that, if I stared at it long enough, expanded away and played a minute or two of narration. The voice acting wasn’t exactly Bryan Cranston, but I’ve heard it was once worse as the game had a lot more of it in a previous version.

Holy shit for a stressful start. I was thrown right on the street with a nasty tornado almost licking the back of my neck. I immediately thought of a similar tornado level in No One Lives Forever 2, only without a flying house. It did break apart as I entered it, though. And then it changed to the peaceful dreamworld.

What is it with game developers and their penchant for having a really intense beginning these days?

Right. Balls. The “nerve cluster” balls could be placed in small areas that created an environmental change:

Sometimes a special white “nerve cluster” only appeared during nighttime, adding an additional layer of complexity to the puzzle. But for the most part, these ball puzzles were actually quite easy. There were an exception or two – especially “Hallowed Sands” near the end – that felt oddly challenging.

A ball in the patch of gears also changed the color of leaves on trees. A nice touch! 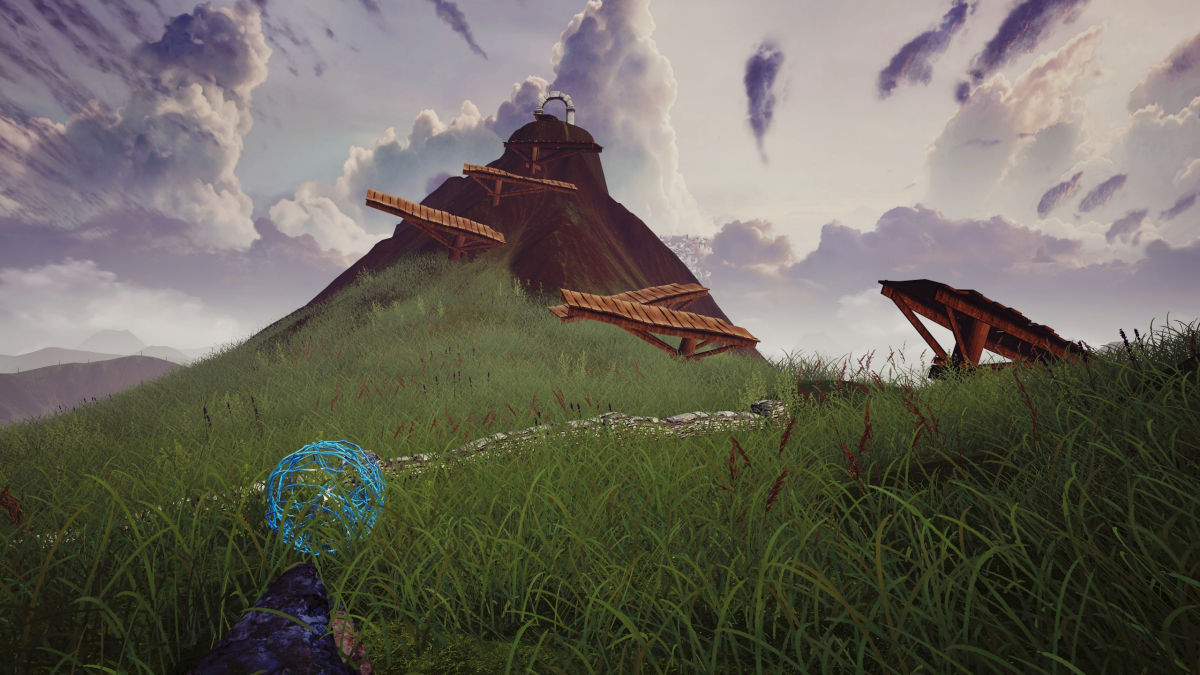 The game also had other tricks up its sleeve that didn’t involve the balls – such as e.g. ruin stairs and paths that weren’t solid. Reflections in the wet sand then showed the actual pathways, which wasn’t always easy to see because of the way the light fell. This was of course absolutely deliberate.

Some levels just had the goal of reaching a white portal door or the end of the level, while others required me to flip several oval mirrors for creating light beams. Luckily I didn’t have to adjust the beams, however. They were already set correctly. All I had to do was to make sure the mirrors were flipped.

A few earlier levels required me to dissolve a wind bubble by creating fog, then walk into the now calm area and get ready for the fog to dissolve. This threw me upwards to a platform I couldn’t otherwise reach.

Although the puzzles were for the most part relatively easy, they did sometimes involve some nifty timing. Typically placing a ball on top of a hill or a staircase and then hurry to the place to be before the ball entered the small area that changed an environmental condition.

In “Hallowed Sands” I even had to place a ball on a piece of the ruins that was once whole according to the sandy time patch, then remove the ball from the time patch to make the ball drop into another area that created rain. It took a while to figure out and felt strangely more difficult than the rest of the game. 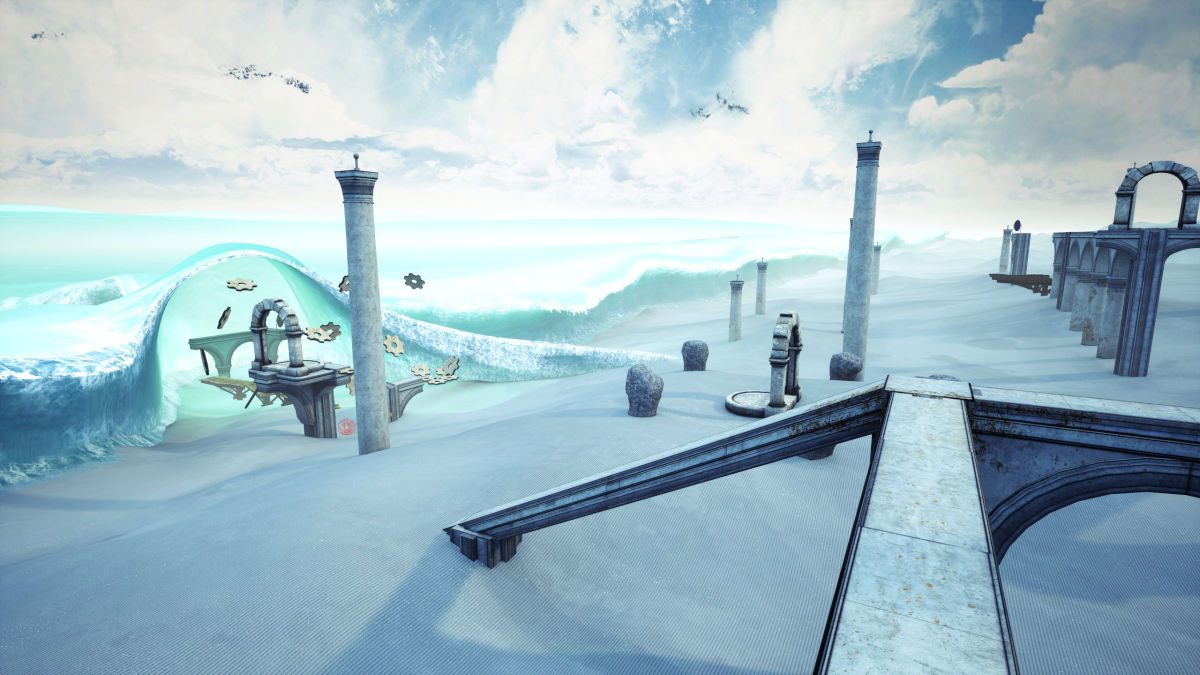 Speaking of difficult, there was also sort of a “boss fight” against an enormous stone colossus with legs as big as mountain cliffs. I had to avoid getting stomped upon while also running to fetch a ball and place it somewhere else. It was certainly memorable, but it was also too easy getting flattened by daddy.

I mentioned glitches earlier. Well, once or twice I managed to see the “nerve cluster” ball drop into the polygon graphics and disappear, and in the “Hallowed Sands” chapter I managed to get completely stuck below the ceiling after a wooden pathway had lifted me up.

All of these bugs required me to restart the chapter.

The end of the game made it clear that our protagonist had actually been in a coma for a decade. I sure hope I never get into a coma myself – I don’t want to be stomped upon by my dad.