This really was a paradoxical game for me – one I both loved and hated, all at the same time.

The game had absolutely charming art and sound. The graphics reminded me of a cute amalgamation of Borderlands and Psychonauts, and the music cassettes that could be picked up turned on the suitable band music. Tiny and Big had their grunts while the dialog was presented in black bubbles.

In short, Tiny was chasing Big who had stolen grandpa’s magical underpants.

The basic rules of the game were pretty simple. Climb and explore using three tools – a laser to cut up stones, a rope to pull towards me, and a sticky rocket mine to throw and detonate. To help with the pulling, I could also push like Lara Croft, only even bigger things. Cutting up stones was by far the most novel and ingenious thing about the game. A marker line could be twisted and then triggered for laser action.

Corners could be cut for walking where jumping was inadequate, or big poles could be cut and then pulled for creating makeshift bridges. Fully fledged physics were part of the 3D engine, making it important to be careful about how things tumbled down. This part of the game was so much fun, and the pulling and pushing added the perfect extra touch. It made it easy to tweak and adjust for jumping.

Throwing rocket mines was less useful. Sometimes it could help shifting a wall or a pole, but to be honest, I think I could have completed the game without that tool.

I don’t think I have played a more vertigo-inducing game than this, or if I have, it’s sure to be in the top five along with the worst from the likes of e.g. Tomb Raider. The many vertical levels with thin walkways or tipped pillars often made me lift my shoulders.

This is the kind of game I’m not sure I would ever go VR for.

If only the game had been pure exploration, climbing and cutting my way to the end, I would have been a happy player. I might even have given the game 8 or maybe even 9 out of 10.

Unfortunately, that was not to be. Tiny’s brother Big (who was actually smaller) ran ahead and broke up the exploration with telekinetic action, throwing big boulders in my precise direction. This made for extremely stressful levels where I had to be on my toes, cut up his boulders in midair, and hurry to move closer. Often Big was standing on a floating stone that I could cut up, making him lose his balance. He then swooped towards a different floating stone to stand on – typically somewhere behind me.

These levels made me die 20-30 times or more. Yes, really. Sometimes from being crushed under boulders, sometimes from falling down from the abundance of edges above hellish depths that I barely had time to be careful about while it was raining boulders from above. 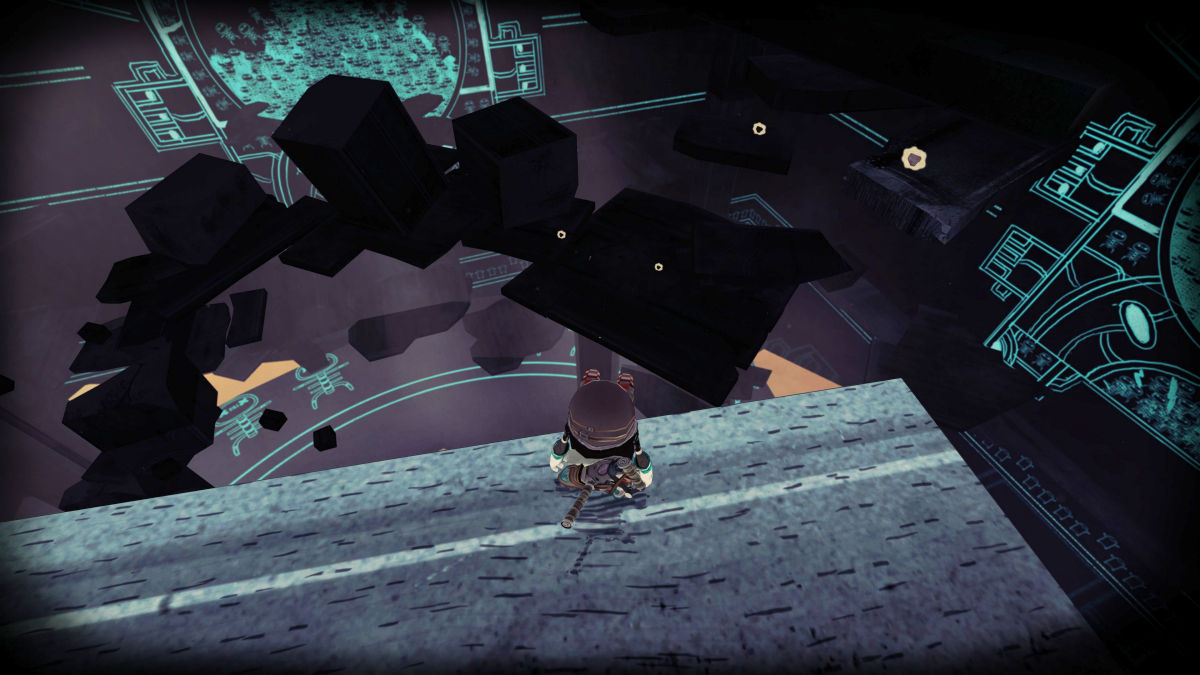 The inevitable boss arena fight in the end was especially sadistic. I quickly found out how to cut up the five islands that Big jumped between, but this then made him throw three enormous walls that could shatter the arena island I was standing on. This part felt so impossible that I had to view a YouTube video about how to deal with it. An old gaming nut like me shouldn’t have to do that.

Developers, shame on you.

But in between these atrocious displays of pure gaming abuse, the game once again reminded me how awesome it could be when Big was not around. There was a part where Tiny dropped into a pyramid, into the dark insides where stone underpants had to be slid into placeholders to open doors. This is probably also the place where my vertigo was tickled the most. But again that was really good gameplay.

To redeem themselves, the developers ought to make a new game with only Tiny’s name on it. Just throw Tiny in a deep dungeon or temple with no enemies whatsoever, and watch how players will love it.