I played roughly the first two and a half hours of this one before I called it quits. It was an oldskool point-and-click fantasy adventure with good voice acting and excellent backgrounds. It was also quite easy. You could hold down space to reveal all hotspots, and although inventory items were aplenty, the cursor only went red when something could be combined or used on a hotspot.

This also got rid of the dismissing comments for trying everything. Everybody wins.

In fact, the adventure game was so charming and relaxing that I understand all the praise it has received in reviews. I know this is starting to become a cliché, but had this been 15-20 years ago, I would have swallowed this game whole. But today, I’m worn out on adventure games and it has to offer something really special to keep me in the zone. And that was the problem with this game. Although it did have its moments of inspired ideas, there were not enough of them, and the dialogs were missing a little more of the reckless quality found in the classics.

In other words, the game was missing a bit more bite.

The game was generally about a gnome being handed an important ring to bring forth to the arch-mage in a town. After a tutorial controlling a red-headed girl on a flying dragon freeing the cage of the gremlin with the ring, I was in control of the gnome in a dwarfish inn. I had to activate an odd robot to catch a rat and later acquire three things for his grandad.

In then turned out that “getting three things” was a recurring theme in the game.

As soon as I got the three things for grandad – a pot as a helmet, a map from the inn, and a sewed up parachute, I was sent to the town via a cannon invented by grandad. After a detour with the girl in the empty house of the gremlin (apart from a mummy in a golden coffin) I was back controlling the gnome again in a big town with very few people in it. 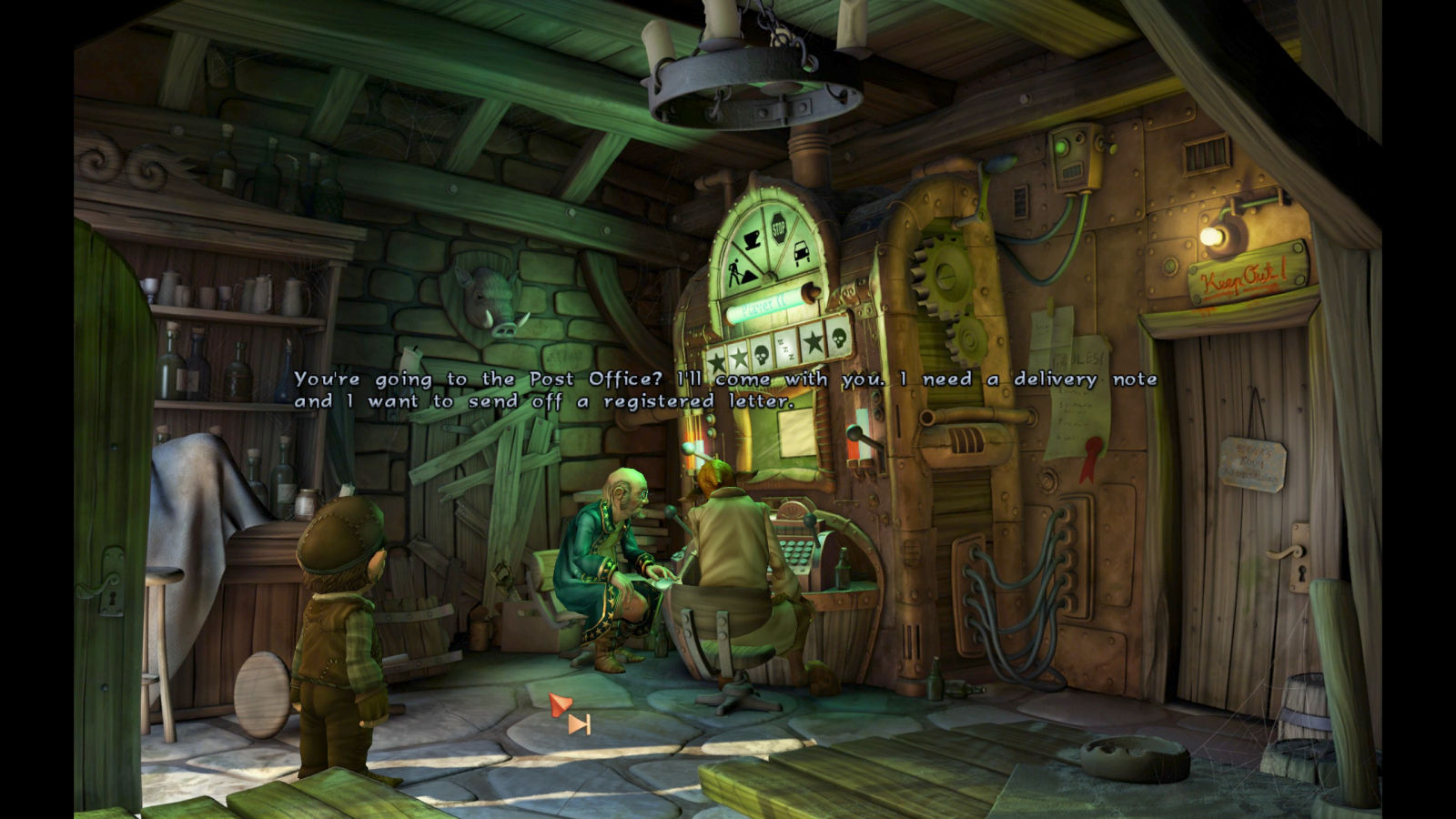 This is also where the game had one of its few really inspired moments in the short time I played it, but even then it didn’t feel all that original. I found a mage and a shopkeeper completely sucked into playing a real-life RPG with quests like doing your taxes and subscriptions for glasses. Inside the machine was a monkey switching punched cards and pulling levers. It was then my task to find a way to interrupt this monkey so that the two guys got angry and stopped playing.

I abandoned the game after having talked with the mage and the shopkeeper. The game is about 14 hours long. Sorry, but I need the game to be more feisty for me to spend that much time with it.

If it had been about one third that length, I might have considered completing it.