This is another post in my series about the odd games that I have decided not to complete, although I will at least try them out for up to an hour. This no longer just applies to free games or games given to me by a friend that had several keys of the same game to give away. It now also applies to games that I just didn’t feel like continuing. I want the game to really grab me before I want to see the end of it.

This was a first person horror adventure bordering close to facile adventure territory. I actually thought this game felt promising to begin with. It was based on the Dyatlov pass incident, where nine Russian hikers mysteriously died in the northern Ural Mountains in 1959.

Admittedly, the beginning was indeed weak – crashing through a road then walking on a flat snowy surface until I found the tent. That was unnecessarily confusing. 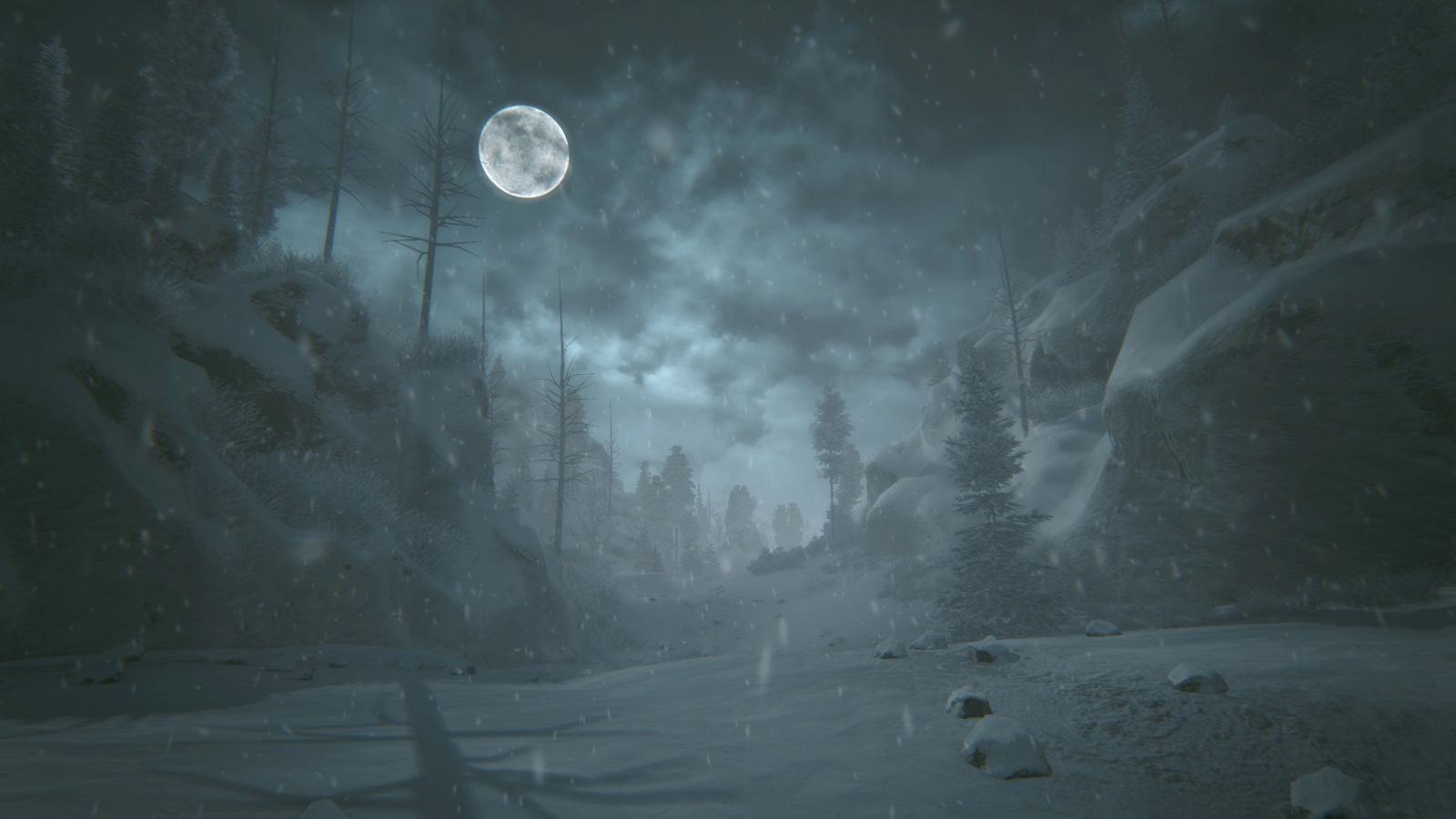 But from then on I was given map and compass and had to explore the meandering paths of a large snowy landscape. At first this looked like it was just up my alley. I sometimes saw glowing human figures, found notes lying on stones to read (this also saved the game) and the weather changed from windy, snowing, to fog or clear weather, always taking place at night. And Sean Bean was narrating! Promising indeed.

But alas, it didn’t last long. Let’s begin with the worst problem of all.

To navigate the enormous area, I could pull up a map and compass. Think Far Cry 2 when it comes to style. Although it was easy enough to read, the protagonist wasn’t marked on it in real time. This turned out to be a much bigger problem than it had to be. Too much of the landscape looked like the same snowy stones and cliffs, and the compass didn’t help much. The only time where I was certain about my location was when I found a note because this added a red note icon on the map. 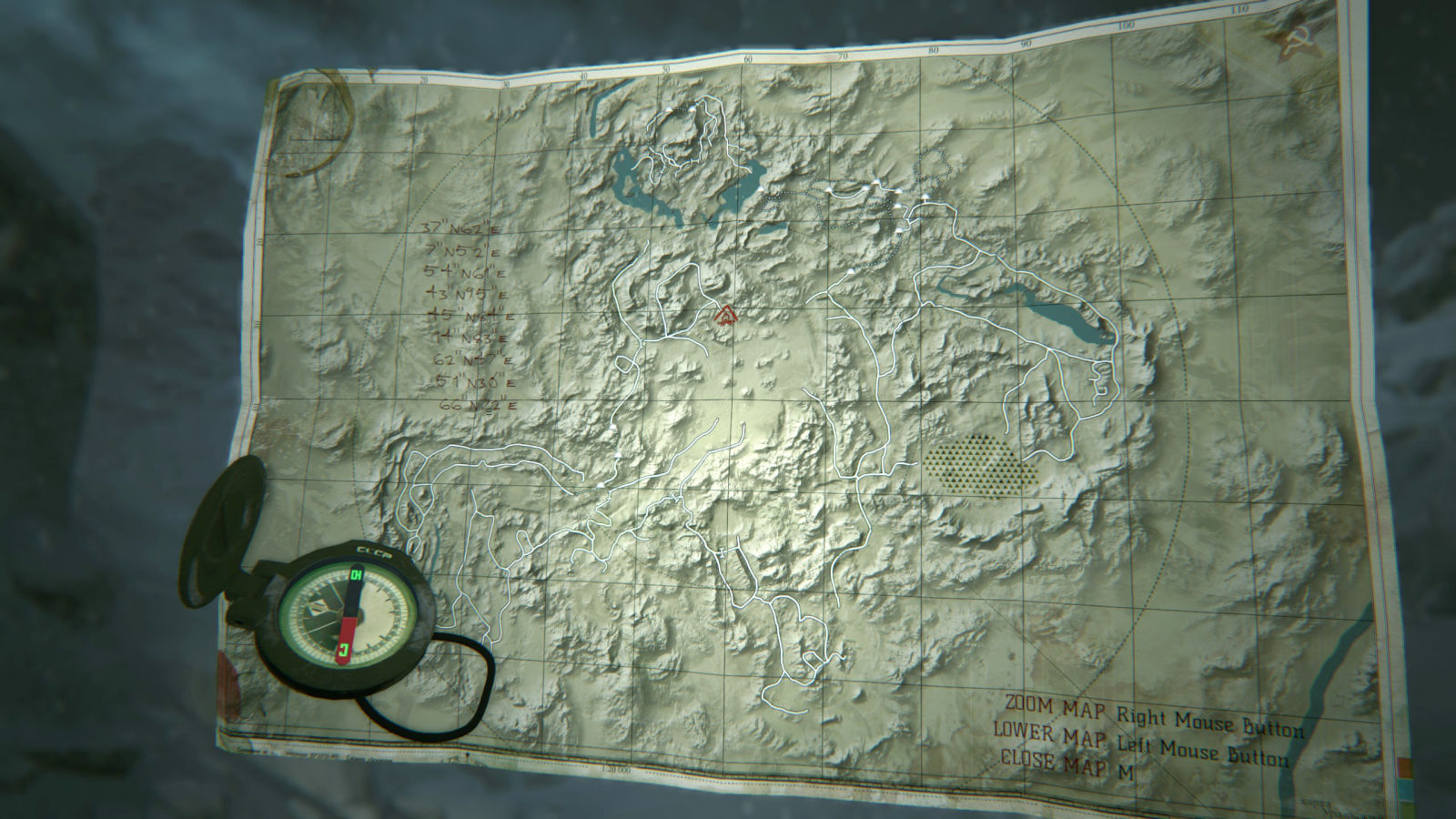 Another big problem was the cheap deaths lurking everywhere. There were black ash ghosts wandering around here and there, leaving fiery footsteps. If they sensed me nearby and caught me, I was dead. It was possible to run, but the protagonist was in even worse shape than me. Just a few seconds of running and things got blurry. There were also spike traps hidden under a lay of snow, nigh impossible to detect.

I sometimes died where I never saw it coming.

Wolves could be heard once in a while, but I never saw any. I liked how notes were flapping in the wind, making it possible to home in on it. I also found coordinates on a few stones, perhaps marking a point of interest on the map. And I found a cabin with supernaturally banging windows. I had to hide in the wardrobe to escape one of those black ash ghosts. Yes, that trope again.

Mark of the Ninja

This was an excellent 2D stealth platform game with great mechanics. It was also at times a bit too difficult for me. I wish I was driven enough to complete it in spite of this, like I probably would have 15-20 years ago, but I just know there will be frustrating situations to come and I don’t want that in my games of today.

The art direction was also top notch. The intro cutscene reminded me of the animation shows by Genndy Tartakovsky and the style persisted in the game itself. As a ninja, I had to sneak around in the shadows, use circumventing air ducts, shoot lights with darts, and sometimes take down guards from behind. There was a lot of Deus Ex about this, no doubt about that. I loved Deus Ex too back in the day. 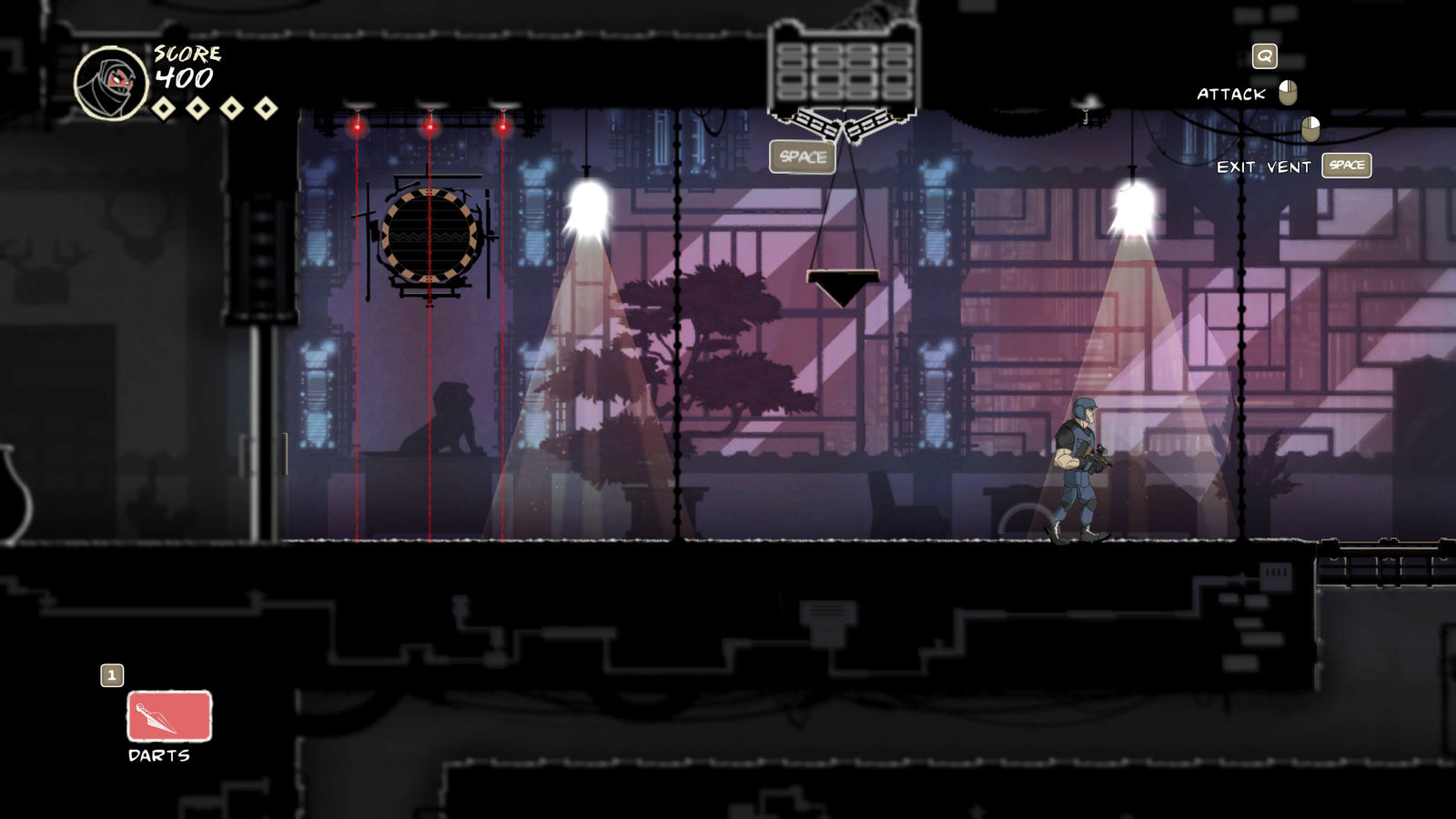 The game was filled with extra achievements, upgrades, and additional equipment – often found in the air ducts. I soon had a grappling hook for whizzing to hotspots, a sword for killing, darts for those lights, even firecrackers for distraction. I could crawl on some walls, throw darts on electrical panels to disable room lasers, even push against a door to “see” the guards on the other side of it.

So many cool mechanics in this game.

And it wasn’t always necessary to kill guards. Sometimes it was fine to just bypass them, if it was possible. This was sometimes great for a breather since they were ruthless. If they heard or saw anything, they were immediately alerted and swung around their flashlights. Me getting lit and it was open fire – and it sure didn’t take many bullets to lay this ninja down. Death of the Ninja.

The first game was not released on PC, so I never experienced it. There was a “refresher” in this sequel, but I still felt like I missed out as the protagonist greeted recurring friends. The game turned out to be a slightly frantic FPS in a big city. Lots of explosions and gore.

It felt a little old school. Sometimes it even reminded me of Kingpin from 1999.

As Jackie I arrived at a restaurant among mob families. Explosions and shots damaged my leg and made me immobile. Enemies in reddish suits soon put me in sort of a rail shooter, as I was dragged backwards by a friend. Outside I accepted the evil inside me which grew two large tentacles. No more rail shooter.

The left tentacle could grab things and throw them, even crush certain doors. The right tentacle could slash enemies up close, but the controls for this were a little cumbersome. Later I gained access to a shop and bought the ability to eat the hearts of the fallen, restoring my health. I even had a demonic monkey join me at my side. It was happy to help out grabbing and attacking my enemies.

Sometimes it farted and peed right in front of me. Such a charming little ray of sunshine.

I never quite got used to the demonically possessed Jackie not liking any lights. The screen went black and white, and the demon voice in my head pleaded me to get out of it. Lots of shooting lamps in the ceiling. The tentacles were nice but I actually ended up using guns the most. I could dual wield even the oddest combinations of weapons. I had almost forgotten how annoying it is to reload all the time.

This was a casual puzzle platform game with vibrating 2D graphics in the style of Braid. Each screen were static and had to be completed by collecting all feathers. The static screen was divided up into three or six big areas that could be rotated, relocating the platforms in it to a new position.

The guy itself could only run around, climb ladders and barely jump.

After completing the first cluster of screens, I could choose between three other “worlds” with different background themes. These also introduced additional puzzle gimmicks. One had water pouring out of one or more icy blocks, and this could be used to fill areas so I could swim further up. There was a limited amount of water and I sometimes had to “empty” platform containers by rotating them upside down. I liked this idea and the game was forgiving enough to sort of “pour my way to victory” by fiddling around. 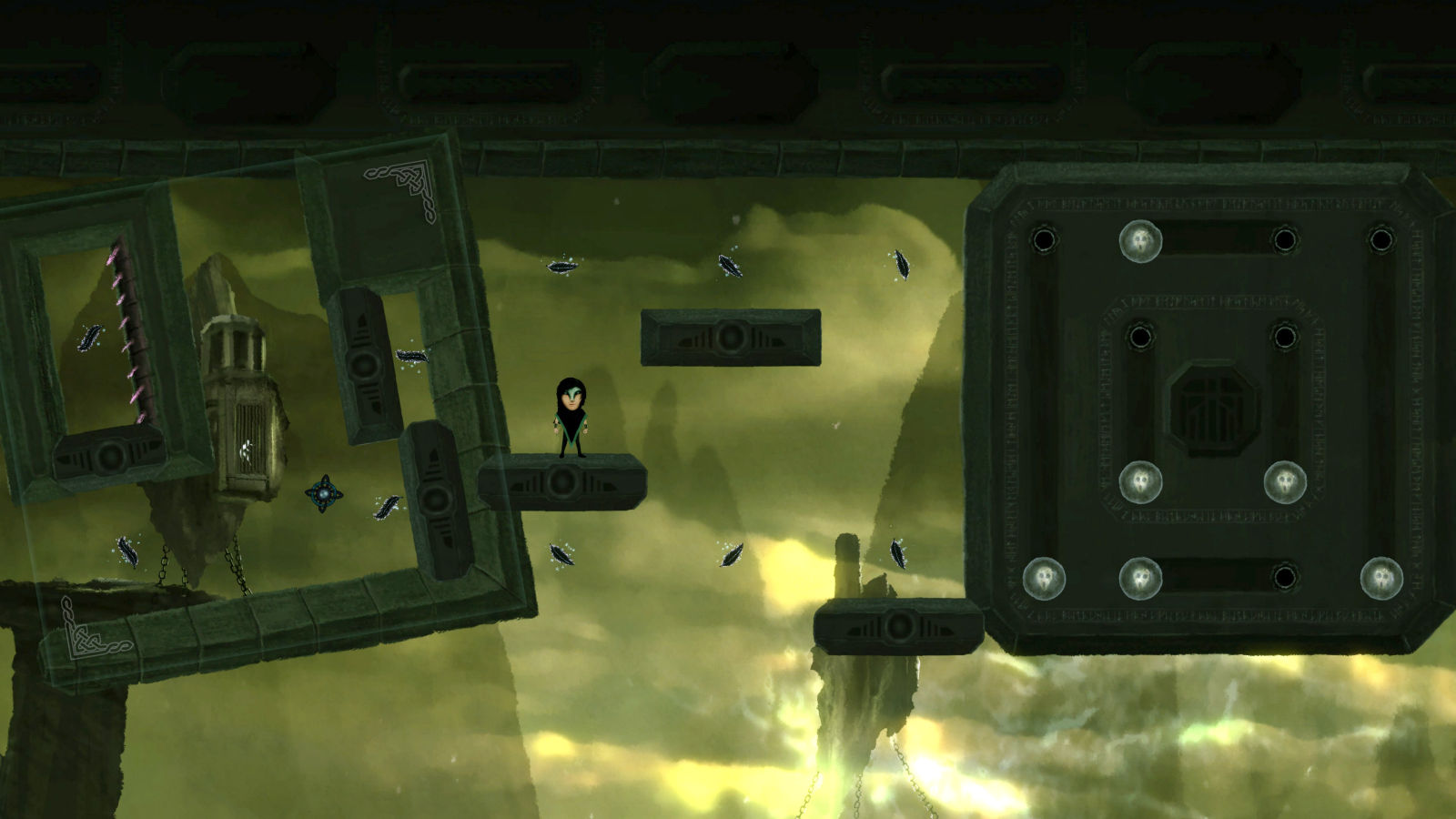 Another “world” had screens with boulders. Rotating the areas here could roll them into other positions, or even squish me if I weren’t careful. It was also possible to push a boulder into a more convenient spot. Sometimes an enormous rock giant passed by in the background, taking up a quarter of it.

In the third and last “world” I tried, an orb could be slid through channels to reach a black end point for turning something on, for example a vertical platform elevator. Some of the later screens here went crazy with small mazes of channels and I had to make sure the orb didn’t slide out of exit tubes when rotating the areas. I imagine the later screens here could get quite tricky.

I played about an hour of this game before I had enough. It wasn’t bad at all – it even had a certain charm and the puzzle gimmicks were certainly serviceable – but it was also slightly boring. It’s as if it was missing something a little extra to knock it out of the park. Maybe a bit more story?

The way this game tickled my exploration desire was right up there with the likes of Morrowind and the Gothic series. Unfortunately it was too repetitive with too little to do, apart from triangulating to expand the map, and picking up flowers and mushrooms for synthesizing medicine.

But I really do understand those that are smitten by it. It had its charms, that’s for sure.

I was washed ashore on a big island with a few abandoned huts and cabins close by. The main cabin held tables for examining botany under a microscope, store it away, and later synthesize one or two together for various kinds of medicine or boosts. The protagonist had a disease and I needed to keep it at bay with medicine and water. Food was not an option though. Apples and bananas could only be thrown. 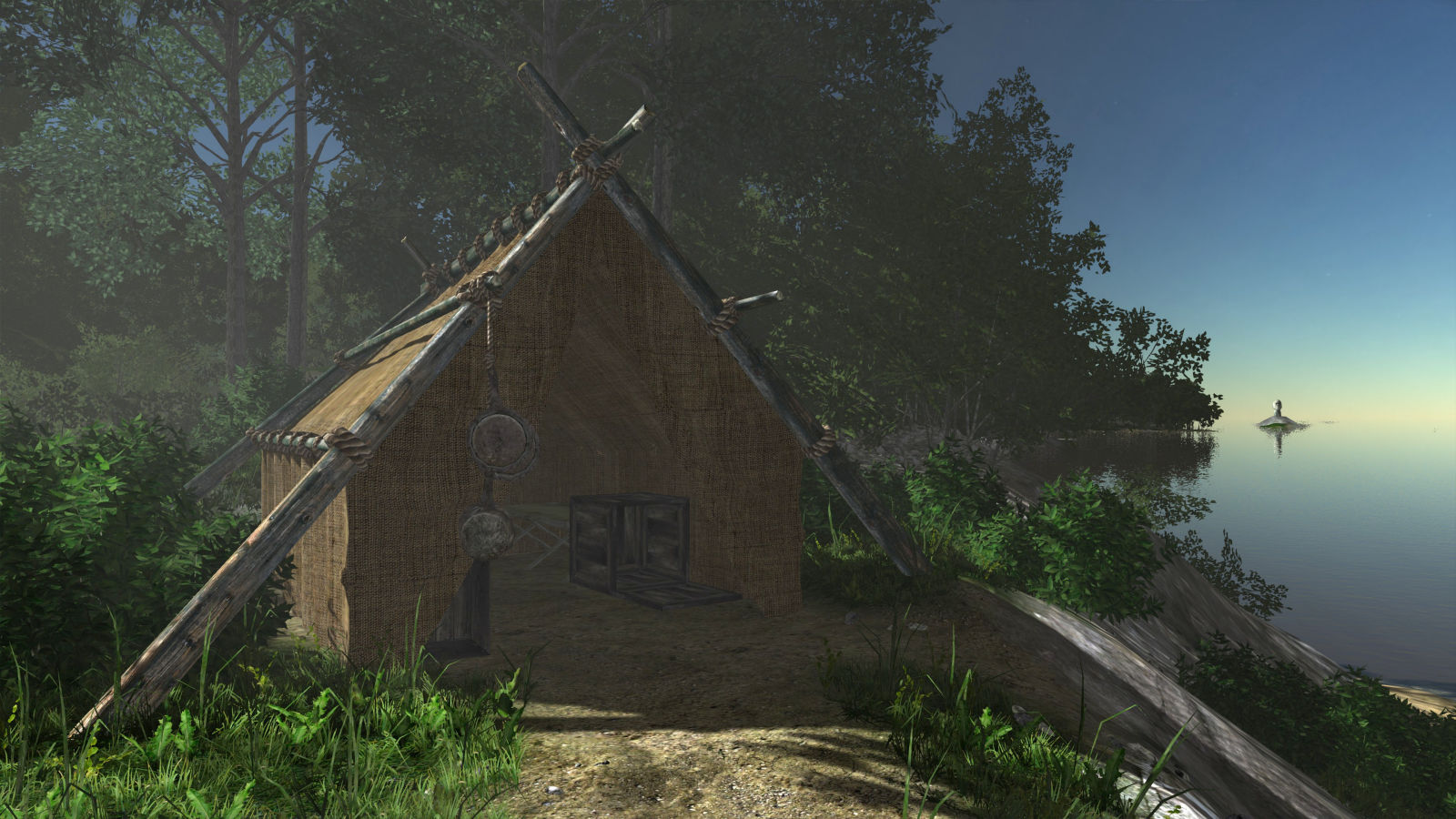 Apart from exploring the enormous island for useful botany, I also needed to uncover more map by triangulating. This was done by clicking two known points of interest in the distance while holding up the paper map. Two lines were drawn on the map, and the cross section of this uncovered a spot. This reminded me of when I uncovered fog of war back in the day, which I quite liked.

Unfortunately I had to stick close to known territory to make this work. I couldn’t just wander into wherever and start triangulating. This sapped some of the fun out of it.

Another part that didn’t hold water was the distance between the synthesizing labs. In the about 1½ hours I wandered around quite a bit of the island, I only found the one in the first camp. I did find lots of tents on my way, but they never had more than a bed, a storage table and a microscope. 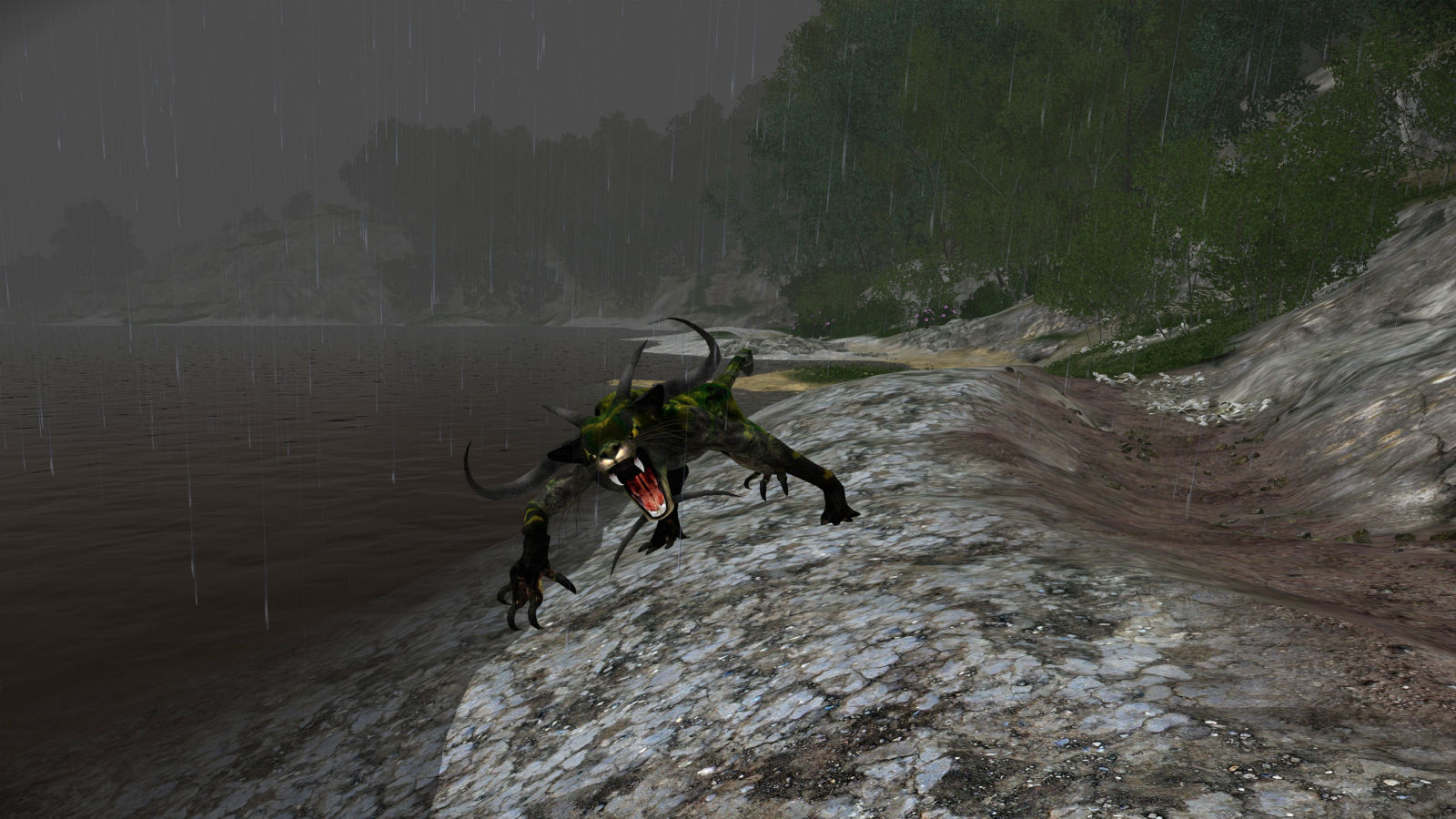 I also met the monster cat roaming the island, but it didn’t even bother to kill me. It just roared a bit and then ran straight past me. Guess it wasn’t hungry. Quite a lacklustre first impression there.

The protagonist had arms and hands present, which sometimes bent in unnatural ways when I held or used something. Because of the entry and the fever, I was weak. Swimming easily meant drowning. It was also hard to climb small hills, and if I fell over the edge I tumbled down in a very confusing manner.

A journal kept track of a few letters I found. It also had a pocket for extra medicine as well as a strangely attached flask of water hanging below it. I liked how the protagonist tapped a new journal entry, to show me where I needed to click in order to read it now. Saving was done either by lighting e.g. a bonfire or a lamp, or by sleeping in a tent. And then it was off to find more mammoth statue heads.