This is another post in my series about the games I only taste for an hour or even less. Originally it was meant for the odd games that I would normally discard anyway such as free games, games given to me by a friend that had several keys of the same game to give away, or games that for other reasons just kind of popped up in e.g. my Steam library without me knowing how they ever got there in the first place.

However, as I’ve grown even less enthusiastic about games, I’ve decided to expand this to whatever I just don’t feel like continuing, even if it’s a game I originally intended for a larger fate. The reasons may be many and perhaps sometimes even petty, but I’ve decided that I want the game to really grab me before I want to see the end of it. This also means that you may be seeing a lot more of these posts in the future.

As a fast first person platform game with a clear goal of dexterity and precision, I had to jump and double-jump on black blocks and shoot flames and turrets to avoid getting pushed into the pretty but deadly abyss while repeatedly reach checkpoints to respawn from. Since missing a jump or something pushing me away happened so frequently, there was even a dedicated hotkey for respawning immediately. 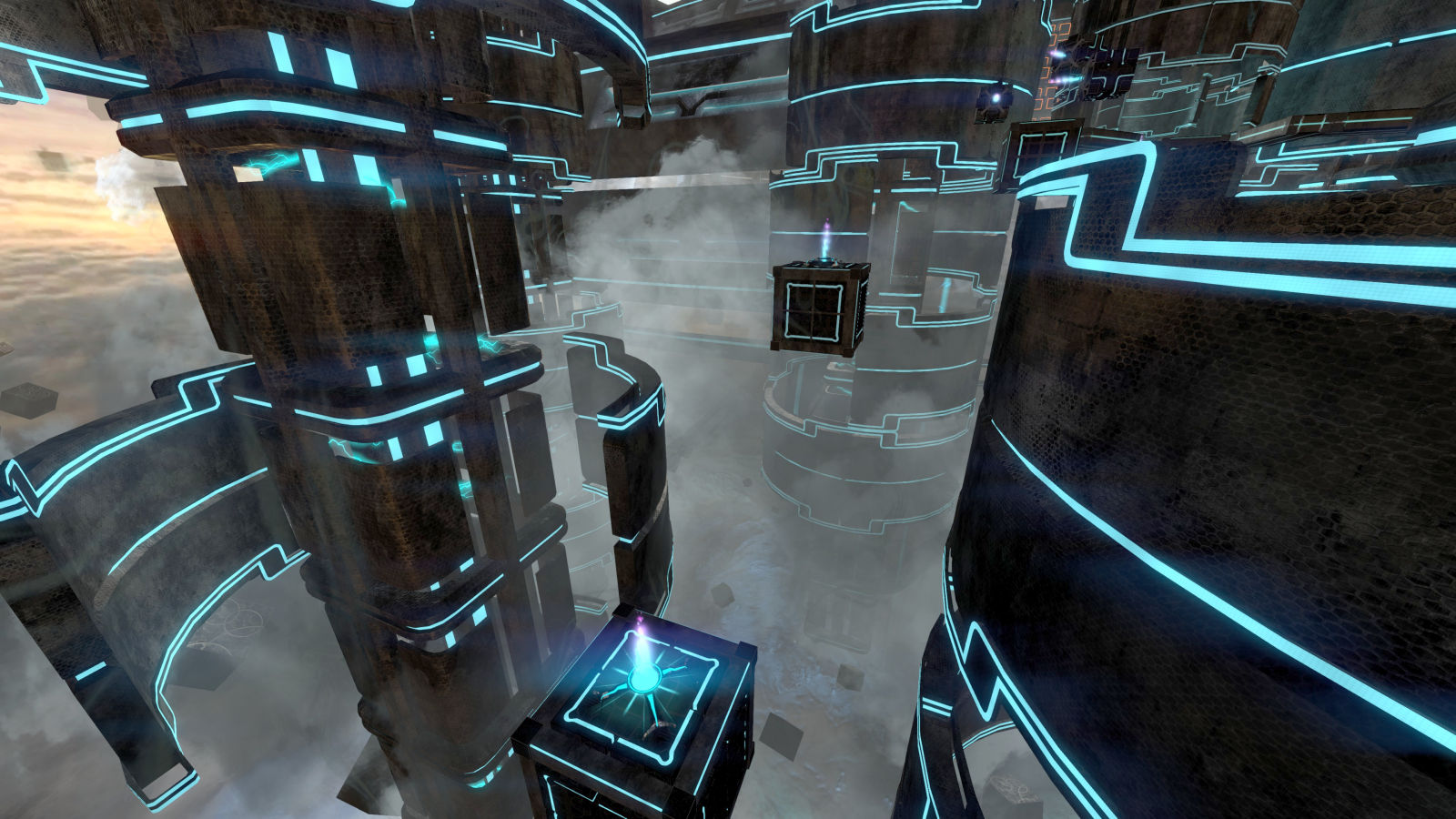 A cute detail was the floating text on rare blocks indicating what needed to be done in order to progress. Shoot the target, double-jump, anything. The style of a “cloud of tags” gave it a feeling of somehow being my own intuition speaking to me. On the not so cute side of things, the pushing flames and the turrets could only be turned off with a shot for a few seconds at a time. Then they switched back on again.

I quickly felt my 50+ years wasn’t compatible with this game. Although I believe I did reasonably to begin with, the patience and reflexes required will no doubt soon sky rocket to a level I just don’t possess.

This one was free so I could have just skipped it, but it was in my library and it looked interesting. Turned out to be a simple 2D side-scrolling puzzle platformer. The double-jumping protagonist was blind and I had three hotkeys for switching the background color to blue, green or yellow. This made features appear or disappear. Enemies or razor blades could vanish or platforms could appear for jumping on. 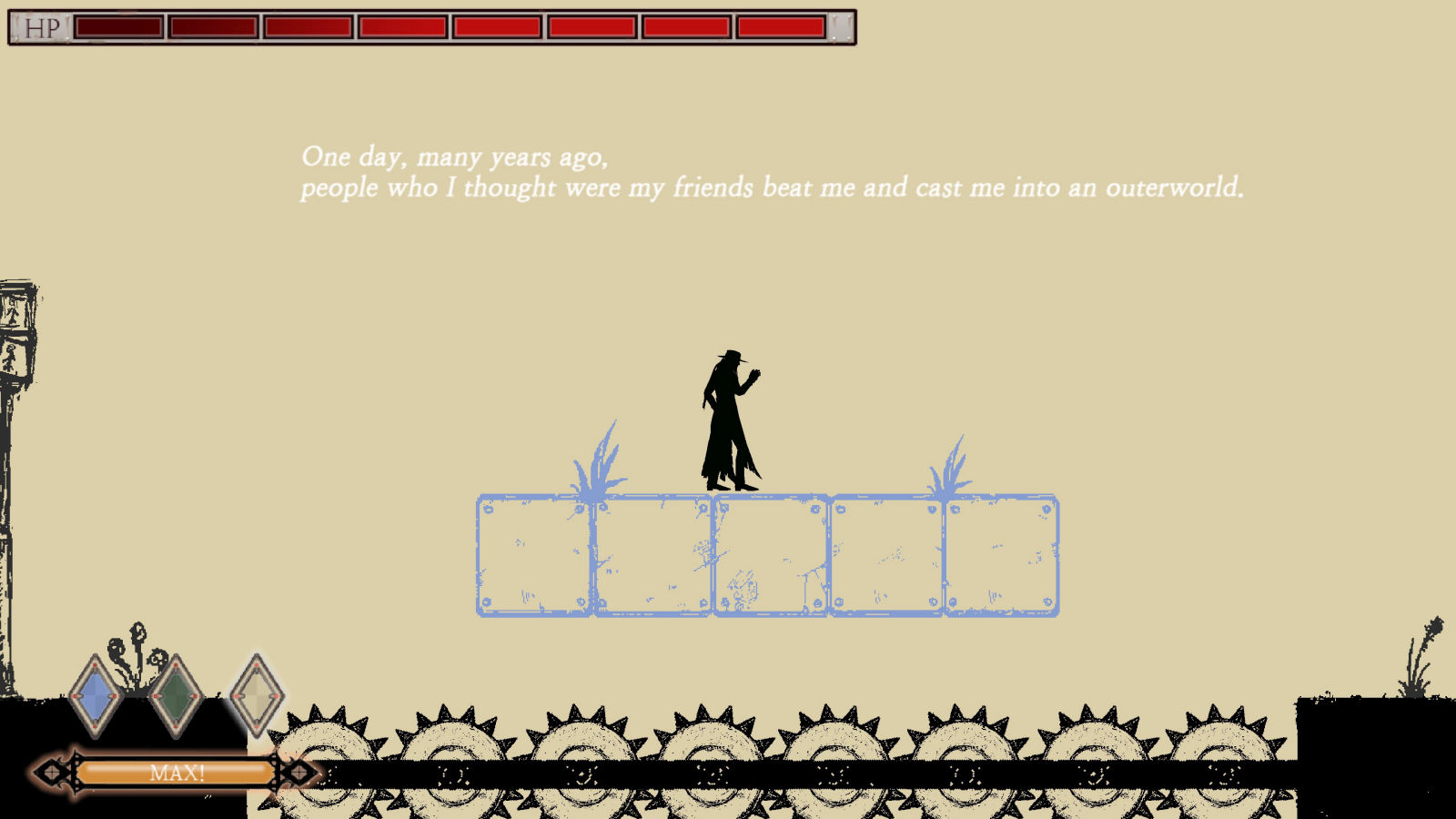 The game had a certain charming “rough” style, a bit unpolished and with a digitized musical track that reminded me of a similar tune in Night Shift. In fact, I was actually seriously considering checking out the entire game, especially since it was only two hours long.

But then something strange happened.

After making my way through several levels (they always ended with a doorway) the further levels started to get mysteriously easier. At first I didn’t think much of it. Then the levels started to appear conspicuously familiar. It now dawned on me that i was going backwards through the same levels again. However, I was certain I had exited all levels the right way, so I thought perhaps it was by design.

Maybe it had a narrative reason?

Then I found the first level again, with the simple hotkey tutorial placeholders still there. Nope. I must have fucked up by going back through an entrance door of a level without noticing it. Unfortunately it wasn’t possible to load the last level I had reached, so that was the end of it on my part. If only the designer had thought about always closing the entrance doors upon entering a level.

I actually played more than 2½ hours of this one and saw more than 50% of the video clips in it, so I admit it barely fits this blog post series at all. I also triggered eight achievements.

Still, I never accepted a satisfying conclusion, so here it is. 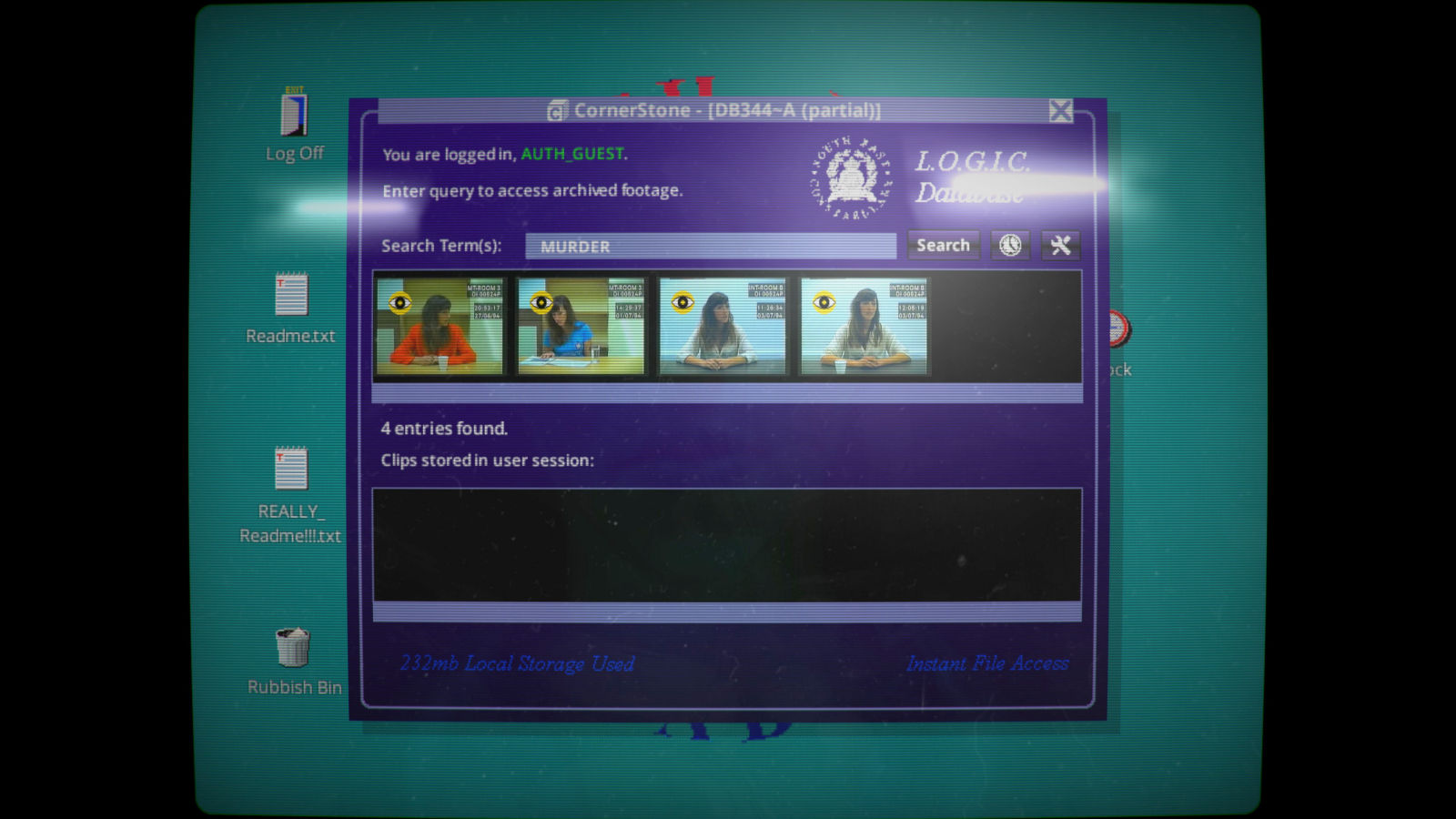 It was a fascinating adventure game solely taking place on an old 90’s desktop computer in a police station, watching short confession video clips by searching for keywords. A man had been murdered and a young woman was being questioned about it.

Her acting was professional and contributed to me being captivated. She often wore different clothes and reacted differently to samey questions, so it didn’t take long for me to figure out that some sort of split personality thing was going on. I believe I was a good researcher and found a ton of relevant search terms, yet I could never get into anything about a mental disorder. I did find sort of a confession, though.

Where I played quite a bit of the previous one, the evaluation of this one was nailed very quickly. I’m not even sure I managed to play half an hour of it. I remember I was a Kickstarter backer on the original game concept Sui Generis. Exanima was a prelude, a smaller but complete game.

It was an isometric RPG controlling one human in a dark and ominous dungeon. The controls sure were different. Running by holding down right mouse, fighting by swinging in a simulated movement engine with calculated momentum and collisions. Dragging of stuff everywhere was also high in demand, and it revealed a club, a shield and a torch nearby that I brought along. 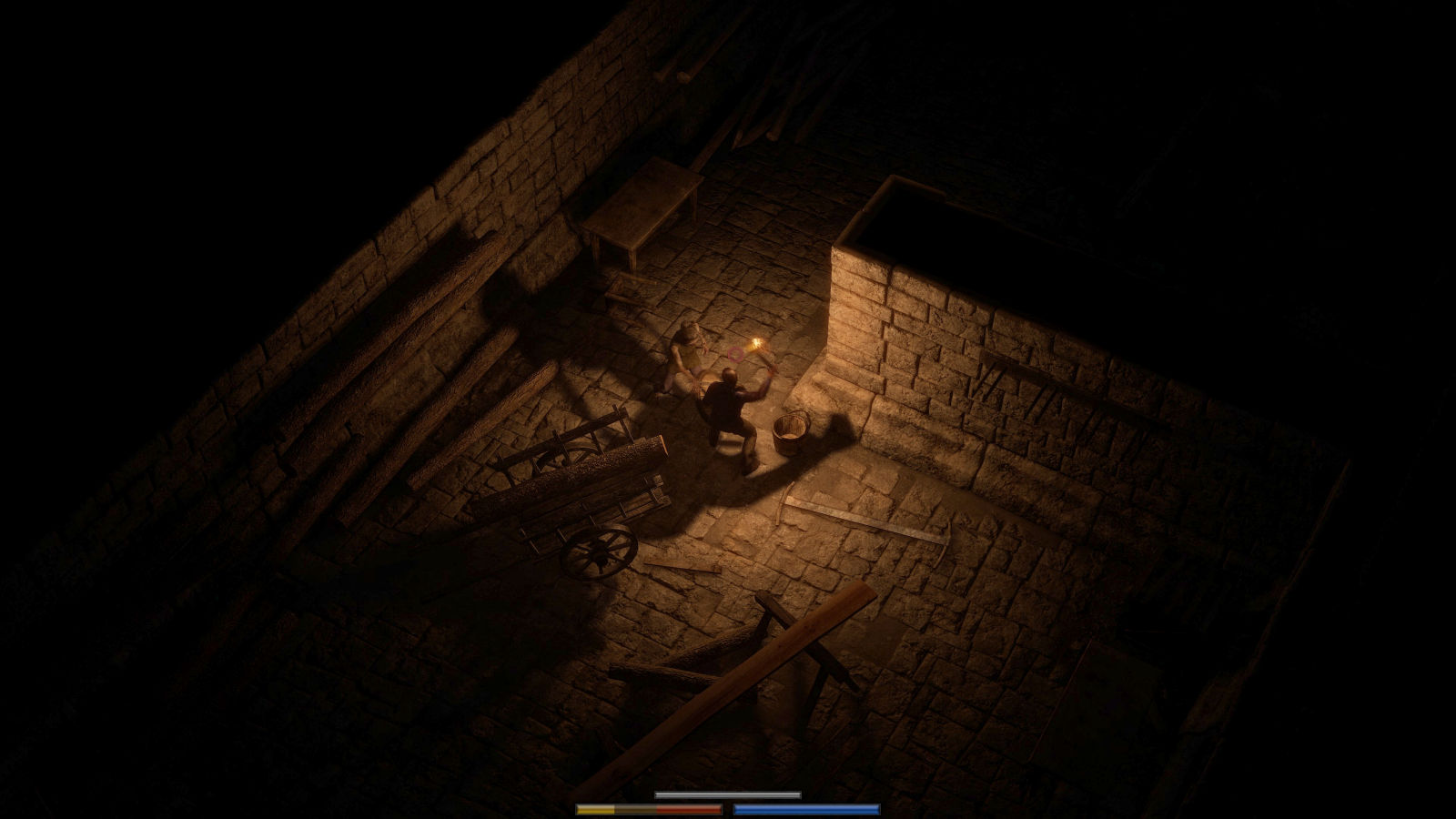 My first thought was that the atmosphere of the dungeon was magnificent. It was rough and foreboding. Dragging a door open and entering a new chamber felt like opening Pandora’s box.

Unfortunately, the encounter with other humans quickly made it abundantly clear how unforgiving this game was. The controls had a steep learning curve and I died quickly in spite of my gesticulating attacks. After a defeat, I just woke up on the same spot for another beating. And another beating. Finally death killed my character and I had to restart all over.

Ah, so it was a rogue-like? Life is too short for rogue-likes.

I did retry a couple of times anyway just to see if I could get better at combat, but it was just the same over and over. A hilarious bug occurred in one of these restarts. After grabbing a club on top of a crate, the crate sort of “attacked” my character, squeezing his head to the floor. He was squirming like crazy and it was impossible to release him. I had to exit to the title screen and continue the game to bypass that.

Another short try of about half an hour. Why not more? I’ll get to that.

It was an adventure with 3D models and cutscenes, clearly inspired by those by Telltale Games such as The Walking Dead. Cel-shaded characters with sometimes timed dialog options, characters that “will remember that” dialog choice, even QTE or fast button mashing (e.g. to force something open).

The story took place after a nuclear war. Only one ark was still closed up and two guys drove up to it in a maintenance jeep to blow the door and make their way in, looking for survivors. The game also sometimes jumped back in time when two janitors were keeping the ark in good condition. In the present I played as Donnie, opening a power safe with a crowbar and getting power to it by fueling a generator with gasoline, and in the past I played as Mia, making my way down to fix a water heater. 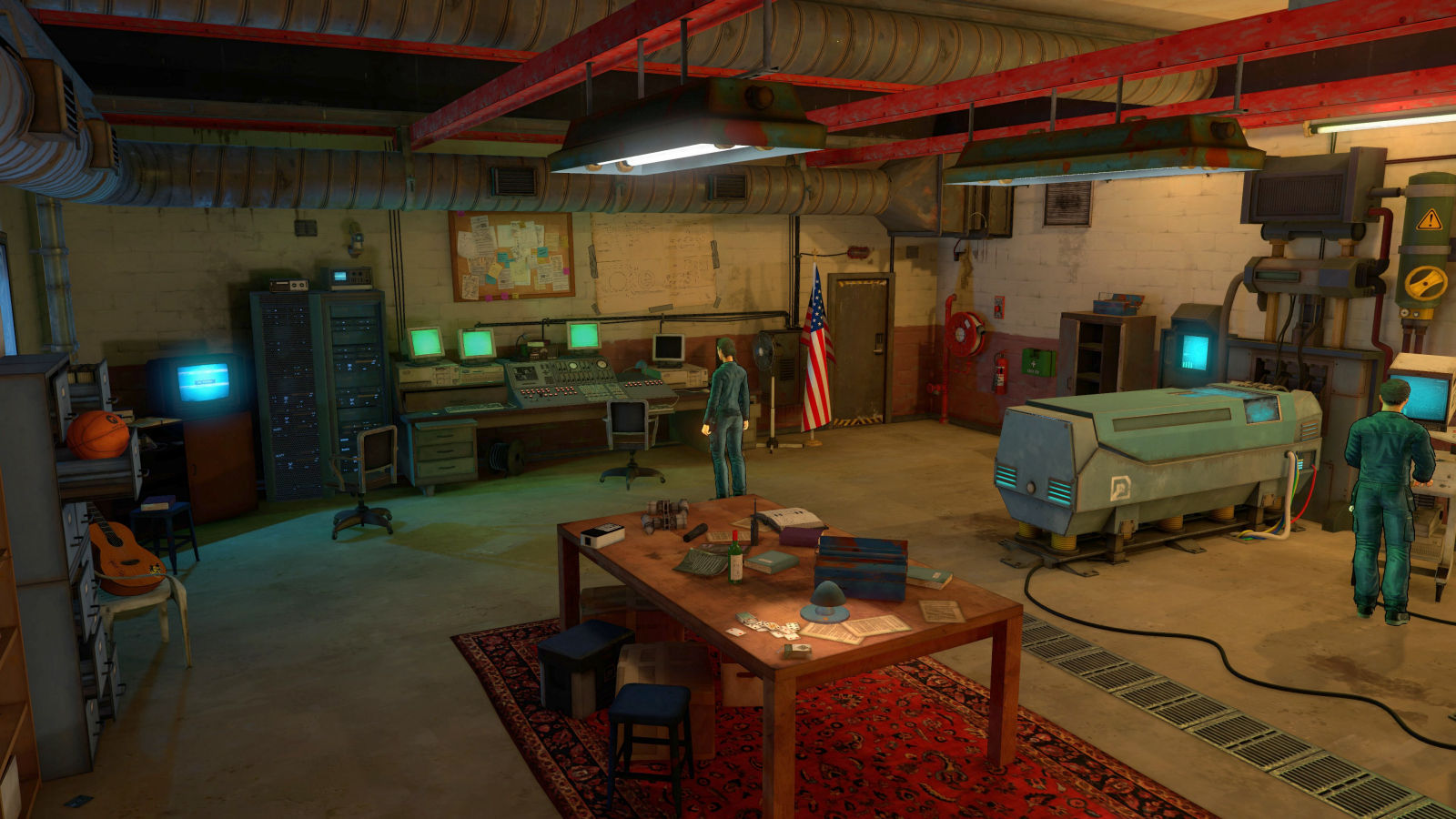 And that’s where I discovered this was not a game I wanted to play. As Mia entered the section with the water heater, her assistant Silas mentioned on the radio that things was going south really quickly. She had ten minutes to fix it or else. I was hoping it was just pure narrative, but after a while he mentioned that she now had seven minutes left. So, there were timed sequences in this game. Bye, bye.

The voice overs were serviceable, although perhaps a bit too macho for Donnie. The camera used a mix of following the protagonist, static view like in an old adventure game, or a fixed view camera like in Resident Evil. There was no inventory; if I grabbed an item, I just knew I had it when clicking somewhere else to use it. There were also no door animations; clicking a door just changed the scene.