Again I’m changing the format a bit since last time. There are now five specific sections, each with a spoiler tag if necessary. Let’s see if this one works.

It’s been a while since I’ve played a game with the kind of puzzles usually found in Tomb Raider games, and The Guardian of Light not only scratched that itch, it also offered challenging enemy fights. Sometimes it felt like an isometric action RPG when the going got tough, but to be fair many of the levels focused mostly on puzzles often based on pushing stone balls or avoiding spear and fire traps. The level design felt very professional and also had a tangible vertical feel to it. It was not uncommon to see several layers of stone bridges below each other, knowing well enough that I would eventually have to go there too. 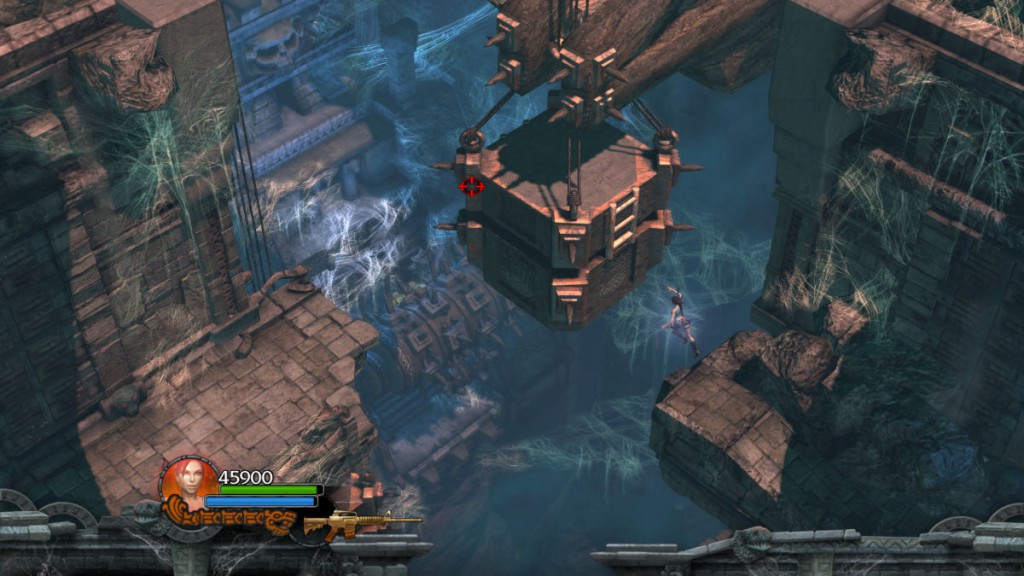 I only completed the game in single player mode, and as always I only used the keyboard and mouse controls. No doubt the game really wanted a gamepad. I don’t think I’ve played a game that made me reconsider my choice of controls as much as this one, but I made it through so it can certainly be done without. That being said, the isometric nature of the level design often required using two directional keys pressed down while jumping, shooting or rappelling. Death was common – there were set pieces where I died more than five times in a row – but the autosaving was quite fair and I never had to redo much.

The difficulty selector had three choices and affected only the combat. The game autosaved and indicated it with a tiny ding when entering e.g. a new arena. Quitting and reloading the game continued from here instead of restarting the level. This was nice because I actually had one graphics driver crash.

I only played single-player, but co-operation play is said to be much more fun. Lara and Totec actually has to work together to reach and solve the puzzles. But because I was alone, Totec just gave me his spear, puzzles changed, and Totec himself only appeared in certain cutscenes.

There was a very nice musical theme on the title screen that reminded me of the work of Hans Zimmer, one of my favorite movie composers. Well, actually it sounded like there had been a solid clairvoyant connection. Never mind, it was still quite nice.

As mentioned before, the isometric view of the game often made it feel like an action RPG when fighting enemies. The isometric 3D graphics could not be rotated, but I rarely felt like I wanted to do so either.

Cutscenes were mostly static cartoon slideshows, perhaps with a few parallax layers to add a little dynamic touch. There were also in-game cutscenes. 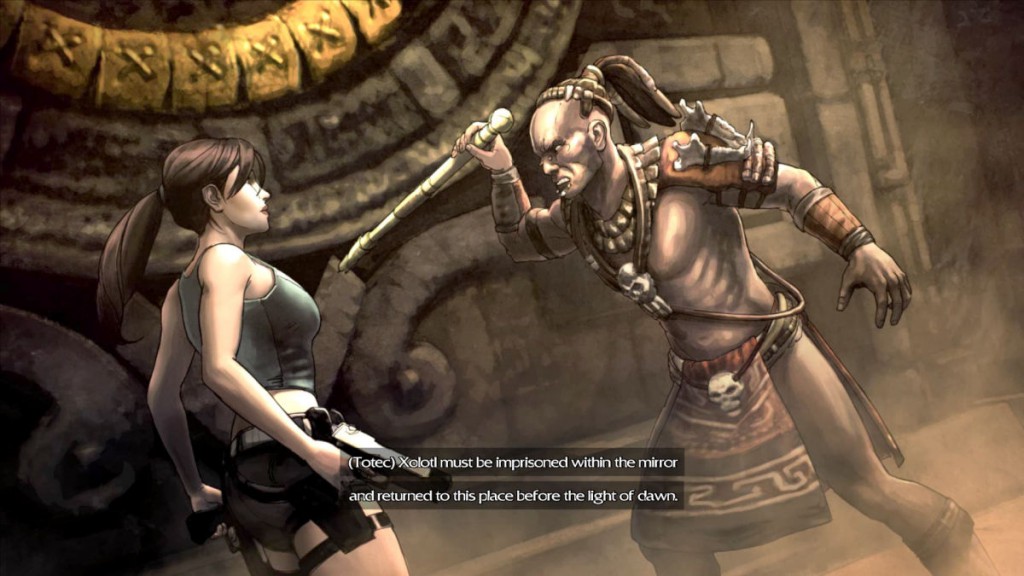 There were some recognizable sound effects from old Tomb Raider games. For example when picking up the score gems. Wasn’t that sound originally used for secret rooms?

Some earlier levels had a fast and slightly monotonous techno tune in the background. Later levels were so busy with fighting that I barely noticed it at all.

I admit that using the keyboard and mouse only was questionable at times. Often two directional keys had to pressed down along with others for an action such as shoot or jump. I consider myself reasonably adept at dancing around on the WASD keys, but there were times when twisting Lara from one rotating platform to another was screaming for a gamepad.

On the other hand, the red cross-hair icon for shooting stuff could be controlled with the mouse. Still, it often felt like the game auto aimed for me – especially when using the spear.

Using the Caps Lock key for dropping and detonating mines was a no go. I felt more comfortable with this on the F key instead. Besides, I can’t stand the Caps Lock light turning on and off for something that’s not relevant to upper case letters.

Death was relatively benign. Often I just had to redo the same arena I had reached. There were even boss fights where I re-entered with the boss still at the lowered health bar state. Imagine that just ten years ago. I experienced some setbacks in the escape levels, though.

Every time Lara died, the music slowed down in BPM. That was a nice touch.

In the beginning I thought the green ground fires were used for checkpoints that would remember my progress for later game sessions. Turned out it was just a healing fountain. It was the small ding sounds that actually autosaved my progress.

There were many optional challenges in the levels – get 10 red skulls, do it under 10 minutes, jump on 7 vases without touching the ground, that kind of stuff. Success gave new artifacts, relics or weapons. 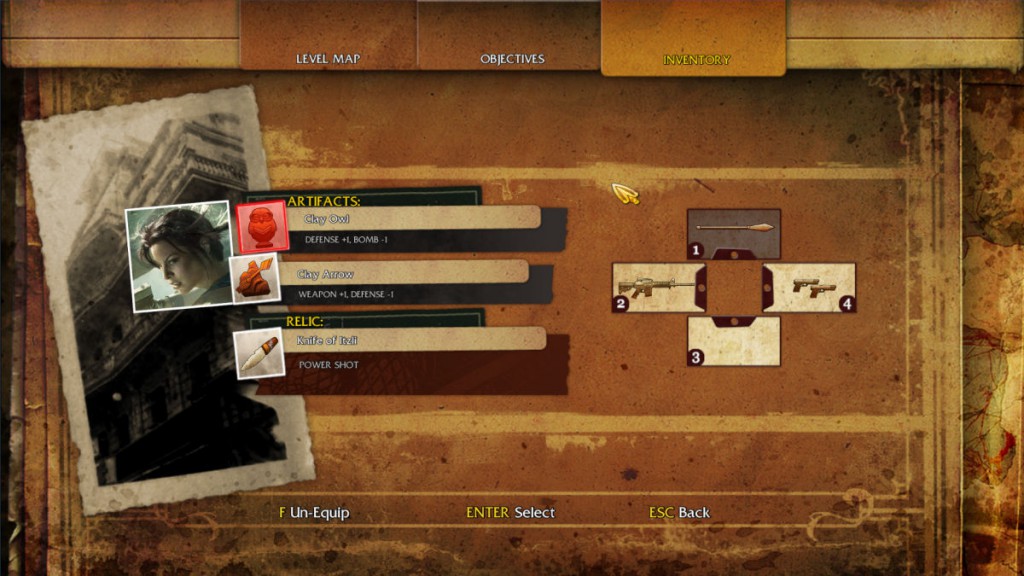 There was an inventory with slots for two artifacts, one relic and four weapons. Artifacts were always activated and gave plus or minus to stats, depending on the quality of the artifact. Relics enabled stuff like e.g. power shot or scatter shot as soon as a power meter was filled up from killing enemies. One hit from an enemy bumped it down again.

The golden spear from Totec could be thrown and pinned to a wall. Up to three could be pinned this way to jump up high walls. The fourth spear would automatically replace the first one.

Sometimes a golden ring signified that a rappel rope could be used here. It was a relatively rare occurrence in this game. Sometimes I had to swing and run across a wall this way, at other times a power-up could be reached below the side of a crumbled stone bridge.

One really forgiving element of the game was that rolling around with repeated right mouse button clicks seemed to avoid almost all of the enemy attacks. Good for a breather, or to reach those blue ammo boxes and green medkits dropped by an enemy at the other side.

A mine could be dropped and detonated – Lara had an infinite amount of these – and it could blow up spear shooting traps, activate switch targets, and more.

There were a ton of puzzles based on pushing big stone balls onto trays, pressure plates or to block a hole with fire. There were no square pushing blocks like in the old days. Made sense – it was more believable that Lara could push round stone balls around. 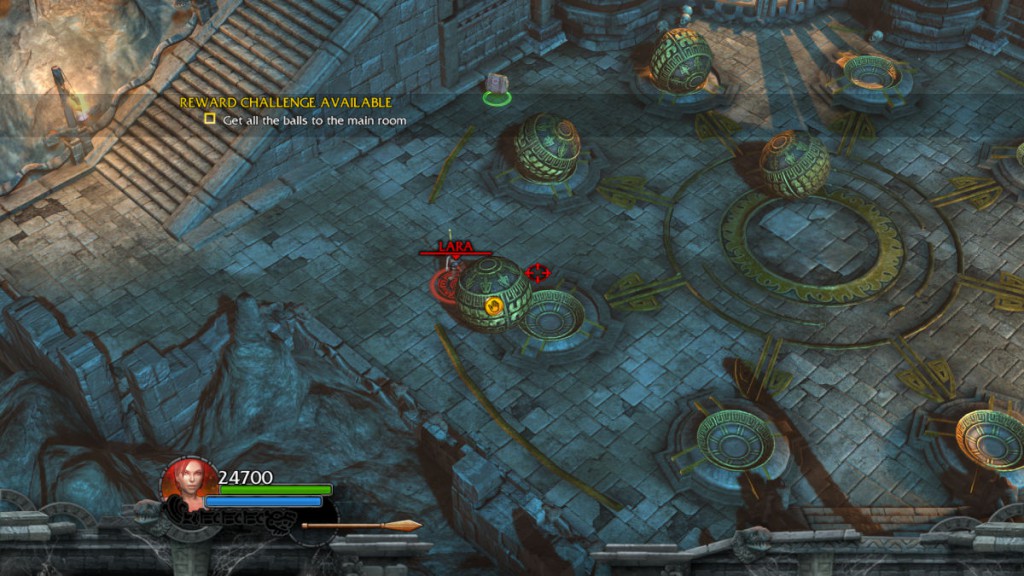 Bright doorways led to challenge rooms with an optional puzzle to earn an artifact, a relic or a weapon. It wasn’t consistently optional though. There were a few exceptions where it lead to a part that was actually needed to complete the entire level.

Levels were of many varied kinds of template types. Some where linear from one end to another, some a frenzied escape (think Uncharted), some a big boss fight in an arena, and some slightly open-ended with an annotated map in the inventory.

A mine could also blast pushable stone balls up in the air, and this was used in a lot of varied puzzles. Sometimes it was used to blast the ball across a gap to another platform, sometimes to land it in a small optional tray to fulfill a challenge. 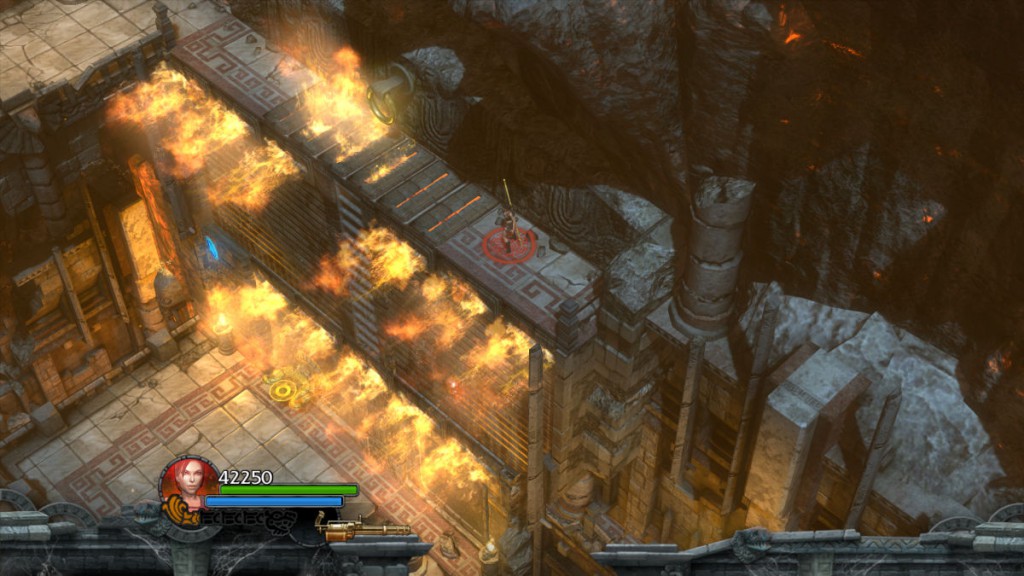 Later levels started using fire traps consistently, typically in the form of fire breathing vents or rotating statues, and these kind of fires could kill Lara in a split second.

Totec sometimes met Lara for a talk in short cutscene, then ran off again. The boss, Xolotl, also sometimes popped up to taunt Lara. No surprises there.

In the fight with the wonderfully fat and ugly dinosaur, I had to lure it into one of four spike traps and then activate a button. Each spike trap only worked once – the dinosaur smashed it afterwards. A lot of smaller enemies were also running around, so it could get quite hectic. I died a few times here, but luckily the dinosaur continued with whatever health level it had. 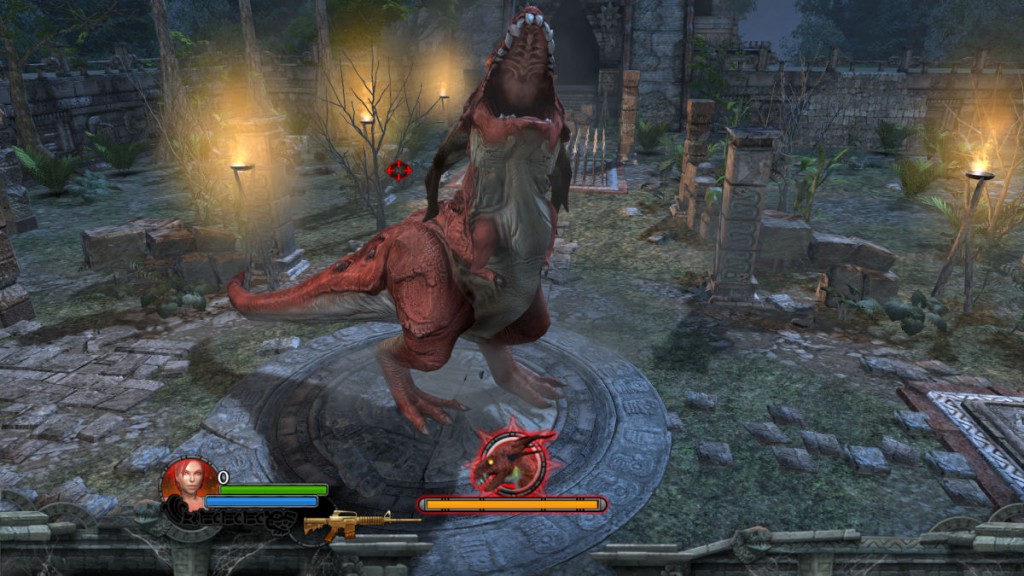 Probably the most annoying kind of enemy among the smaller ones was a skeleton that just never wanted to die. It took me longer to discover the trick here than I’d care to admit, but anyway, I just had to shoot it down, drop a mine, then detonate it. If it was detonated before the skeleton got to re-summon itself in a cloud of black ink, it would blast to pieces.

Among the big brutes, the most annoying type was clearly the one with the shield. Even the mines didn’t seem to impress them much. The best cure here seemed to be using the RPG, but it could easily be messed up by a lot of smaller enemies rushing in from the flanks.

One bridge area had an enormous spike pin rolling over me a few times until I discovered that I could just run of the edge, hold on tight, and wait for it to roll off the bridge. I was much quicker to use the same technique with the rotating fire statues over round platforms. And it was wonderful that this was possible, otherwise those sections would have been gamer genocide. 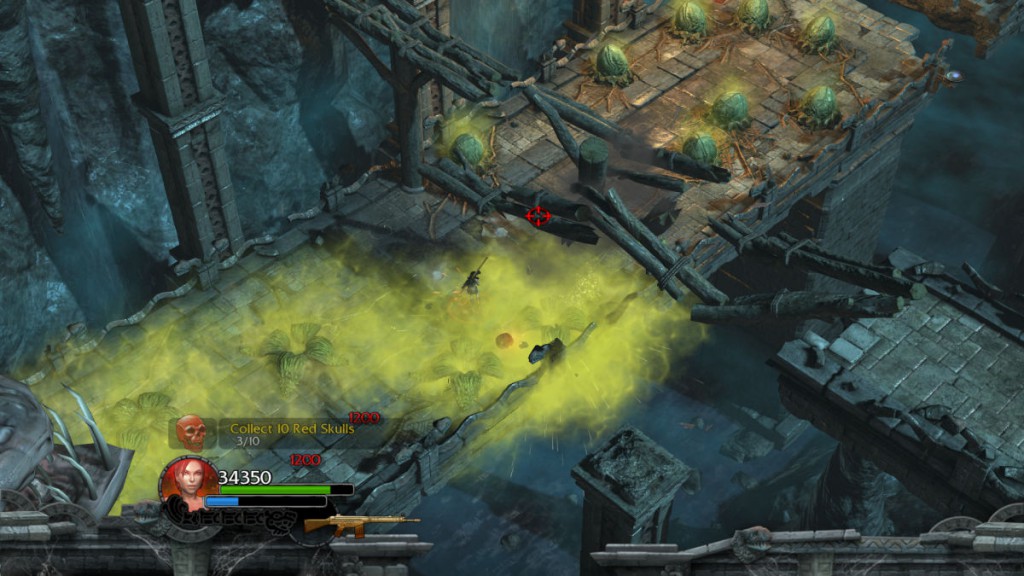 There was a really annoying swamp area with poisonous plants. Getting too close or shooting them aired a portion of green poison gas, but even worse, the bloody plants just grew right back after a few seconds. I could have lived happily ever after without that regrowth rate.

One of the last levels had a nasty puzzle where two stone hands had to be lifted up by a stone ball for each, to stop fire balls from disturbing a ball tray. The ball tray had to be pressed down by another stone ball to turn off fires guarding a mandatory pull switch. I tried mine bombing a stone ball below a stone hand, but the stone hand also had to be mine bombed upwards in the same blast, so it was very tricky. I then gave up and explored further and eventually came back with a total of three stone balls. For each hand, I rolled two stone balls up close to a hand and detonated a mine. At least one of the stone balls had a better chance of bouncing below the hand in the havoc. It seemed to be much easier this way, but was it intended? 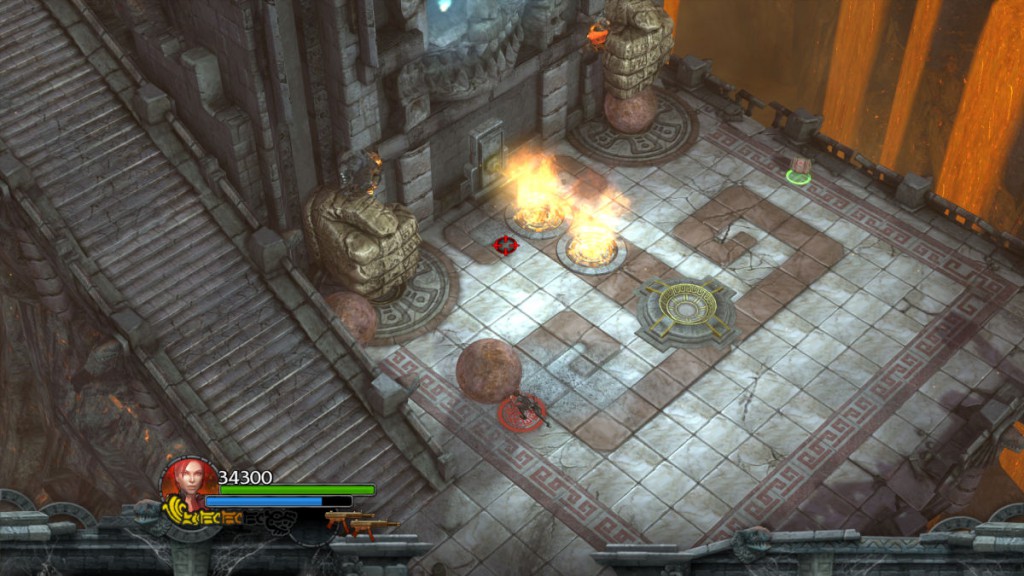 The final level was one big fight against Xolotl, in several difficult stages. First in an arena of spike traps, then avoiding a spike pin, then in an arena with poison plants, and again another arena with fire balls shot at me or even raining down. It was one of those boss fights where you’re wondering how much it really takes to take down this guy for good. It also reminded me of a MMO raid fight. It was difficult, but again the game was quite fair about its autosaving checkpoints.

Again I quite agree with the Metacritic rating – 82 seems fair. The game was quite difficult at times, but the gameplay was still solid and I’m sure it’s even better in co-operation mode.