I’m tweaking the format once again. Although I’ll keep it organized it in the same way as the last time, I’ll refrain from using headers to split up the review. I’ll also try to keep the smaller paragraphs in the minutia list only.

Here’s an adventure game that really succeeded in warming up and grabbing me in spite of a lackluster first impression. At first I thought it felt too much like a kids game. Bright colors, toys everywhere and a childish dialog. But as the first few hours passed by, not only did it manage to come up with a lot of great dialog, it also had that type of equivocal quality that Pixar animation movies also have – something of value for both kids and adults alike. The adventure game atmosphere became very solid across part 1 and 2, and the art style and animation was truly unique. In my mind there was no doubt about it – when compared to Broken Sword 5 or the Deponia trilogy, this was clearly the superior game. I didn’t even think I had it in me to like an adventure game this much anymore. I thought I had become irrevocably jaded.

As you can see in the screenshots, the art style truly was quite unique. It was also supported by a lot of excellent animations. Eyes blinking and gazing just like in Pixar movies (I love that stuff) and lots of extra details, such as only catching hold of a thing after fumbling around, almost dropping it. One thing I thought they overdid was the head scratching animation when choosing a dialog tree question. 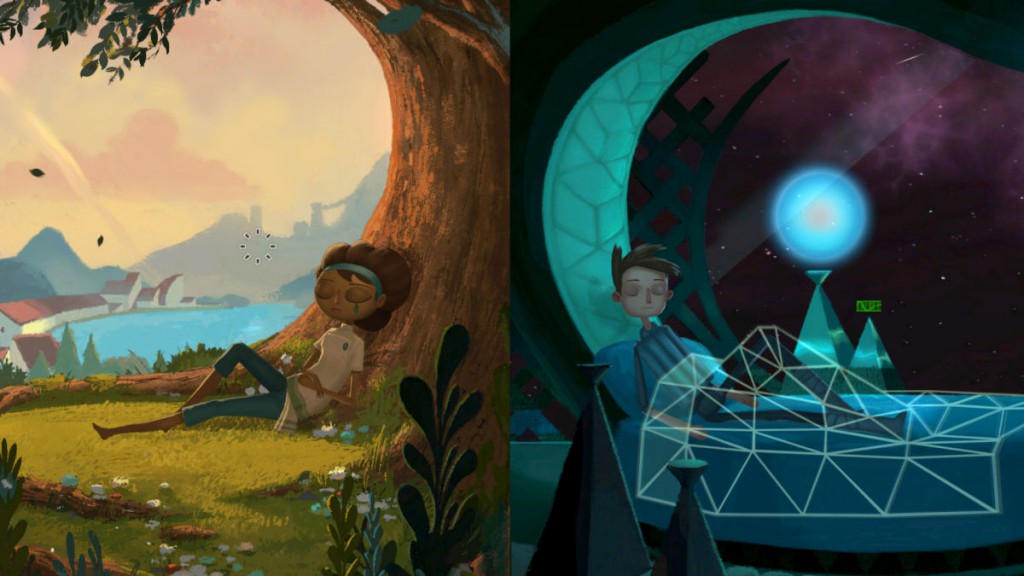 The engine scrolled with detailed parallax and also zoomed very frequently, sometimes excessively when entering a new scene. The music was fully symphonic and of equally high quality. Orchestral music. Voices were delivered by a lot of top actors such as e.g. Elijah Wood, Jack Black, Wil Wheaton and Jennifer Hale. All in all, the presentation was top notch. If I had to put my finger on one thing, it would be the zoom level of characters in cutscenes. It was close up, as if it wanted to cater for the tablet people. On my big widescreen PC monitor, this was a bit much.

As a typical point-and-click adventure, there was the sliding inventory in the bottom where items could be dragged to hotspots or even combined. One thing I would have liked was text labels on hotspots, especially when the hotspots were close. Sometimes I accidentally repeated a dialog tree with a character instead of checking out the item standing close by. 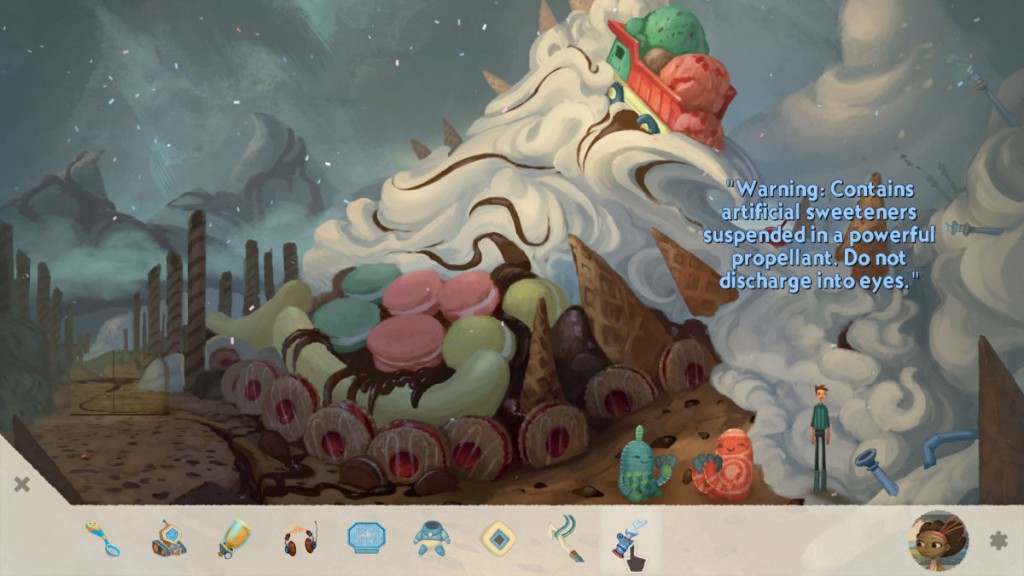 Apart from finding and interacting with hotspots, it also had mechanical puzzles such as controlling a real-time grappling hook, connecting three wires in small hexagonal robots, floating in space, etc. I didn’t think any of them were particularly difficult. No frustrations like e.g. the forced stealth sections found in various other modern adventure games. Some trial and error could sneak in, but even with the hexagonal robots there were tips to find in the game about how to connect the wires.

The game was about the girl Vella in a native village, preparing to be being sacrificed to the mighty monster Mog Chothra, and the boy Shay in a spaceship, being put through ridiculously easy rescue missions. I chose Shay to begin with, but it was possible to swap between them at any time.

The navigation robot in Shay’s spaceship was a knitting master, and there were puzzles about adding additional markings on the tapestry produced by this robot.

The grappling hook puzzle game with the wolf was the casual type where a grappling hook was sliding from side to side, a spot had to be found by clicking arrow buttons, and another click to send the hook down with the right timing. It was relatively easy. 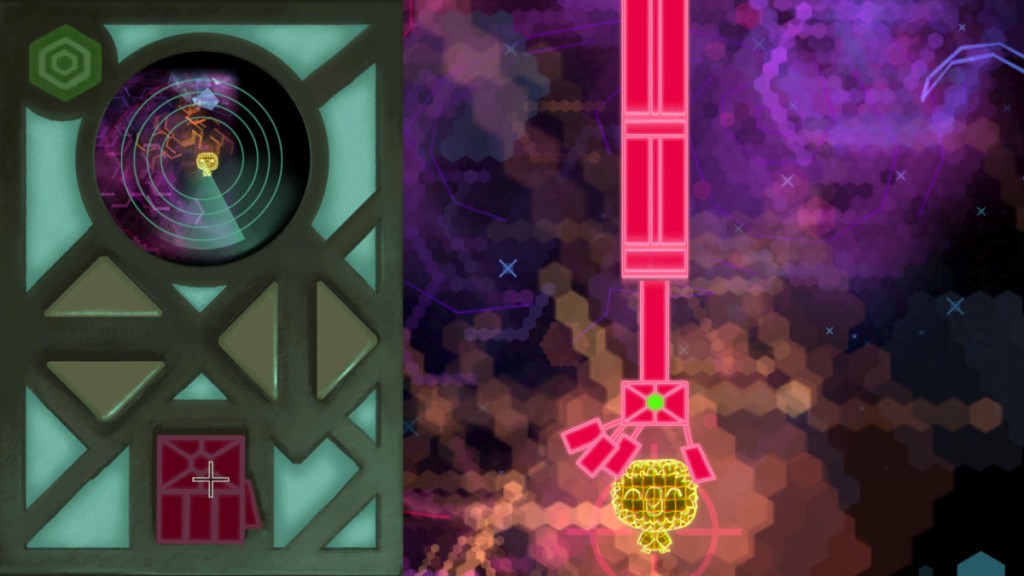 There was a sequence floating through space with Shay using a device to create momentum. Vella also had to go through a similar space floating sequence later. Again, none of them were particularly difficult, and the areas were small.

Meriloft, the village in the clouds, was a marvelous location. So full of imagination and cute ideas, like slowly sinking through the clouds outside the wooden paths, and if slipping through completely, being saved by a bird always present for this one situation. Lots of big birds in nests accompanied by a fitting din. 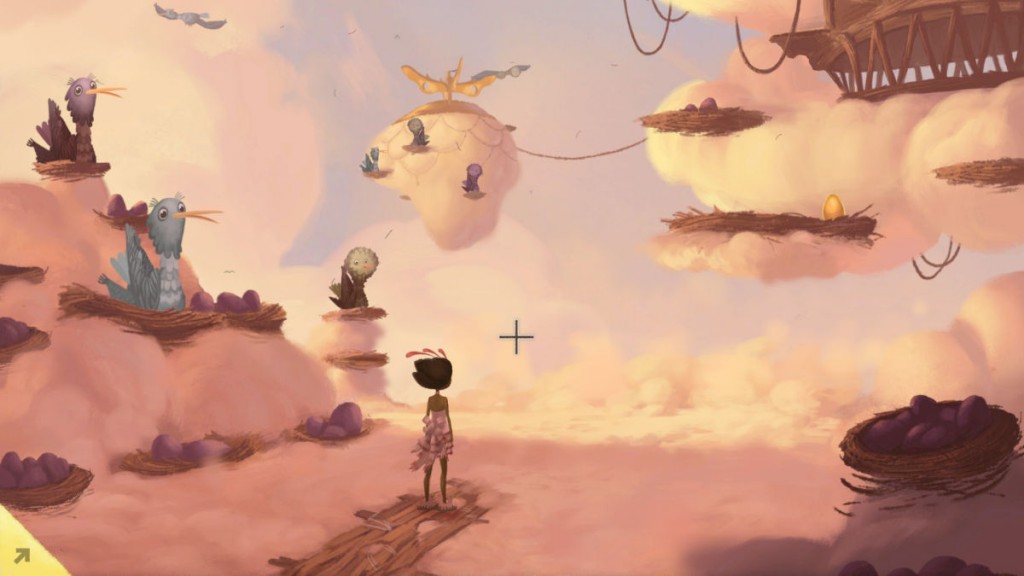 A lot of the dialog merely made me smile, but there were actually a few spots where I really had to laugh out loud. I especially loved the dialog between Vella and the lumberjack about the stool he had to make. And yes, it was that kind of silly.

There were also talking AI cutlery. A knife, a fork and a spoon – evenly distributed between the two protagonists. Trying to use them on something often invoked a cute response. That being said, they all looked like plastic toys to me.

The part where the game really grabbed me was at the very end of the first part, where Vella and Shay switched sides. Vella fell into the spaceship and Shay was now on the beach. Some might think this was a cheap way of reusing the same places all over again, but I was actually quite interested in seeing how the protagonists reacted to scenery the other one had already been through. 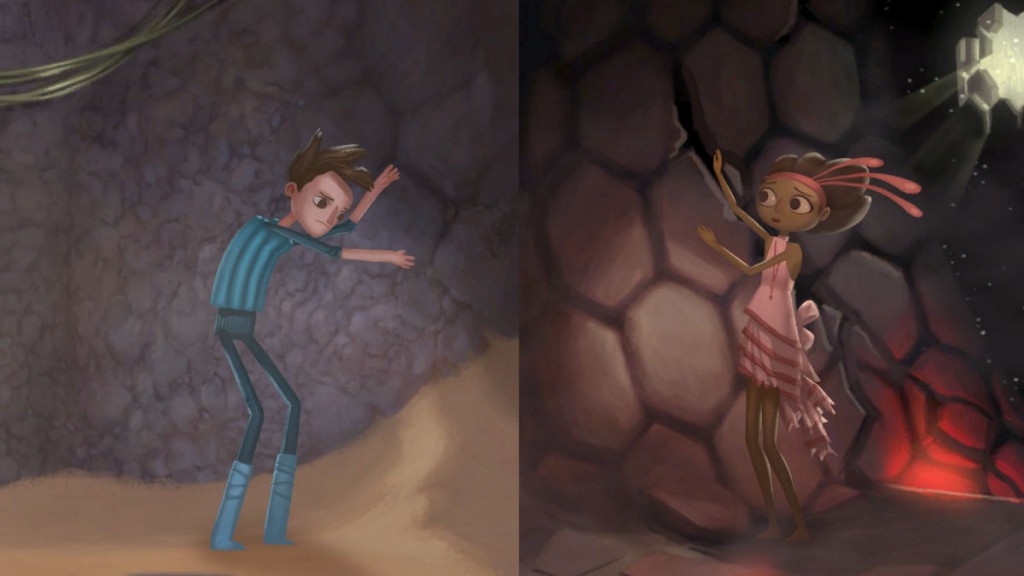 The refugee of the 300 year old spaceship, Alex, actually reminded me of a certain senior animator at Io-Interactive, where I work as a JIRA administrator. Same type, almost the same voice, and even much of the same appearance as well.

So Mog Chothra turned out to not be a monster eating offer girls, but actually the spaceship, in which Shay thought he was traveling through space. The girls that were “eaten” turned up in a locked room later. Of course. After all, this wasn’t supposed to be a horror game.

I wasted way too much time with the knot puzzle in Meriloft, going over a ton of knots and asking the big guy to try poking or pulling this or that. I had started drawing them all down in my notebook and thought I had a pattern coming up. The solution turned out to involve a diagram drawn by the fishing woman by the beach. It was so typically me to expect a puzzle to be much harder than it really was.

The tips for the wire puzzles in the hexagonal robots were actually found across the protagonists. I did expect it – Shay even hinted at as much at one point – but I still thought it was a bit harsh. In the end of the game, Vella even had to just “know” what Shay had just figured out on his part. This didn’t really work for me completely because they weren’t connected in any way at all, neither mentally nor technically. 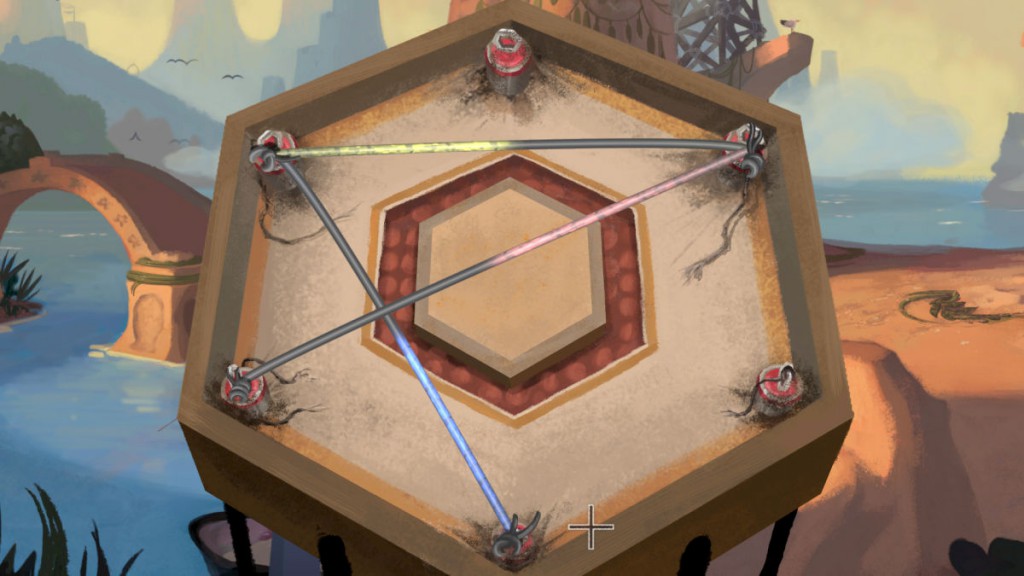 One spot I thought was downright bad design was when Vella had guessed at the wrong pet at mother’s door in the spaceship. The developers clearly didn’t want it to be brute forced, because Vella always cut right to Shay’s museum of toys to research some more. This one was especially bad because it turned out that the pet couldn’t actually be guessed. I had to choose the dialog option about not wanting to do this, after which the mother said that’s just how Shay would have reacted. Bleh.

And how come Vella knew about video games, spaceships, and various other technical stuff? She was never really in awe about this. Maybe the cellars in the native village actually had arcade games and teleporters in them. And speaking of illogical problems with Vella, what happened to her over-sized teleporter head after meeting Shay’s mother!? Did it just fix itself while the mother was talking?

But I really liked the puzzle with the control helmet on, trying to guide the lighting robot through the corridors. It was about clicking the damaged light controls in the right order, and it was refreshing. 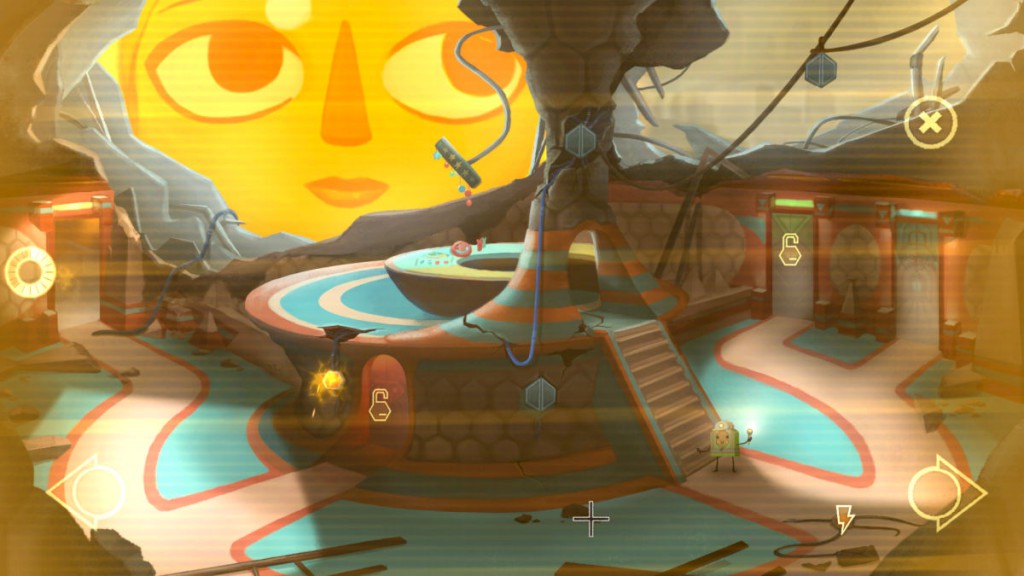 I actually didn’t cheat with walkthrough tips at all, but I sure understand those that had to take a peak or two. I was a little bit stuck towards the end. One thing were the clues for the hexagonal robot wiring, but also stuff like Shay outlasting the snake, using the cloud shoes to walk on the ice cream, or freezing the kitchen robot arm to reach the breakfast cereal, almost got the better of me.

Some of the criticism above may seem like I didn’t always click with the game, but generally the game wasn’t difficult, it was very forgiving about retrying things, and for each annoying thing there were 5 or 10 great ones. Stuff like e.g. a hexagonal robot dancing and playing the harp to seduce a group of rogue robots, the lighting robot tickling the tapestry of the navigation pilot robot, Vella’s hair being all light and fluffy after wearing the control helmet – there were tons of great ideas like these.

The end credits had a truly massive list of Kickstarter backers in the end. It was enormous. Luckily, it turned out that it was possible to type names and find them fast in the ocean of letters. I couldn’t find my name, but I think I also only pledged $30.