This was one of those artsy platform puzzle games with a very distinct style and music. LIMBO was clearly the main inspiration, maybe too much so (it even started immediately too without a title screen) but it didn’t really bother me since it had its own industrial foundation and additional gameplay elements carrying a little brother. The little brother, who broke a leg early, added another layer of complexity to some of the puzzles and also tasted a little bit like the fantastic old PlayStation 2 platform game ICO. The side-scrolling graphics was mostly black and white with a hint of red here and there. Sometimes another color could be seen, like yellow for fire or hot metal. 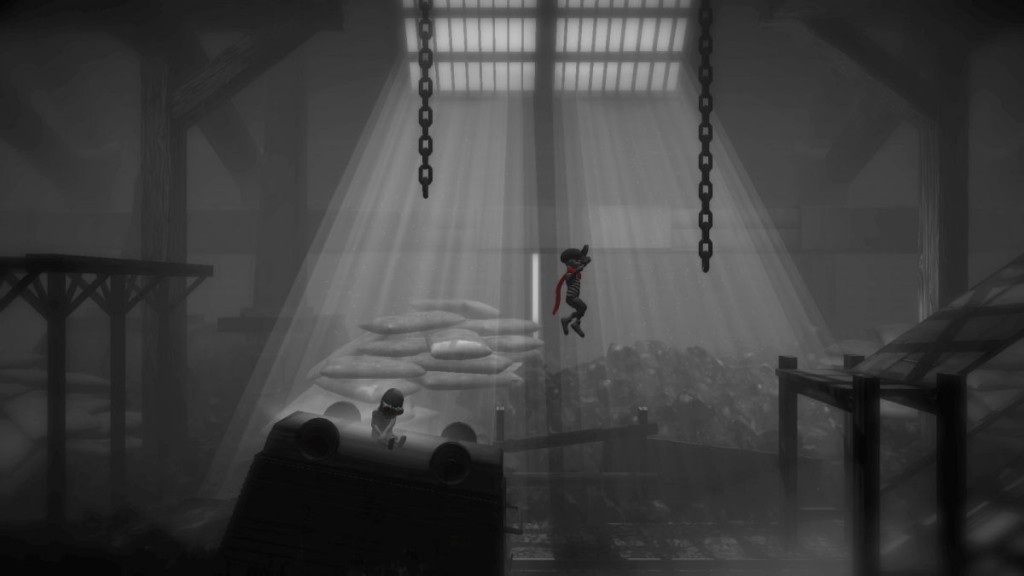 The gameplay had surprisingly long stretches of barely running and climbing, then a room with a puzzle to break it up. Typically of the sort with platforms to raise or slide along with switches. Darkness and rain was prevalent, and it added another gameplay element regarding the little brother. He was afraid of the dark and could only be parked temporarily below a strong ray of light from a lamp. Trying to drop him in the dark just made him shake his head. The big brother could run and jump higher without carrying him, so that could make a big difference in puzzles. There were also ladders to climb, ropes to swing or shimmy along, boxes and small wagons to push or pull, and buoyancy puzzles.

The switches were oddly slow, like they were rusty or required a bit of muscle. Parking or picking up the brother showed a beautiful animation a second or two, but it could be a little frustrating if e.g. a shipping container was slowly being lowered down upon them. Luckily death was merciful. Rarely was I set back far, and it was especially nice to see just coming from The Deer God. Some of the static puzzle locations could be somewhat demanding, like turning switches in a timed manner to jump edges of just reversed elevators, but to be absolutely honest, it still felt fair most of the time. Maybe I was playing a later version that had been patched up, but I didn’t feel that my character was too sloppy while using the keyboard.

The first puzzle I met where a barrel on fire had to be extinguished by pushing it out into the rain escaped me. It was the one with a trap door into a pool of inflammable liquid. Maybe the fire wasn’t indicated well enough on the barrel, but I didn’t get it and kind of only got through the puzzle by being persistent. I then read how that kind of barrel worked in a review, and I made sure to remember it in a later puzzle.

That one was very cute, by the way. A rope up to a trap door had to be set on fire, but it was no small feat getting the barrel on fire to it. First it had to be pushed out into the rain, further inside to a pipe pulled down earlier with periodic fire blowing out, the barrel set on fire here, then pushed back in a timely manner below pallets moving on a single rail in the rain. Not a bad idea. 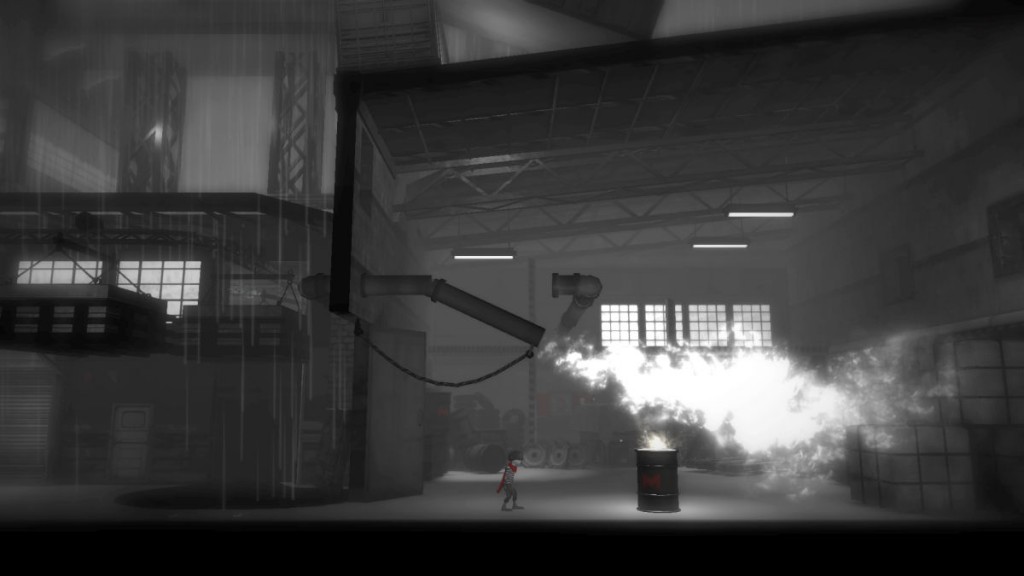 Great joke with the train running past on a neighbor track instead of the one I was running along. I made me jump. As it should too. I bet that one makes most players jump.

A theme worked its way up about an industrial city where children were being kidnapped and put into glass containers. A big brute in a red sweater sometimes popped up (usually as a door swings open) to hunt me down for a few minutes. He could also jump and climb ladders, so getting rid of him often required a solution in motion. It rarely felt very difficult though. I’ve seen worse.

Later, seemingly inactive robots showed up. They could be climbed and then commandeered to drive left or right, or even elevated slightly higher so that an edge could be reached with a jump. The robots never seemed to serve any other purpose than this. They didn’t comment or move around by themselves.

In another cute puzzle piece I had to park the little brother below a series of lamps on a slow conveyor belt, then do my thing before he was dropped to his death. One of the things I had to do was to swing the hook on crane into a window, breaking it. This gave way to a ladder down to a switch that could open a doorway. This couldn’t be done all at once. I had to return after the glass broke to move the brother back. 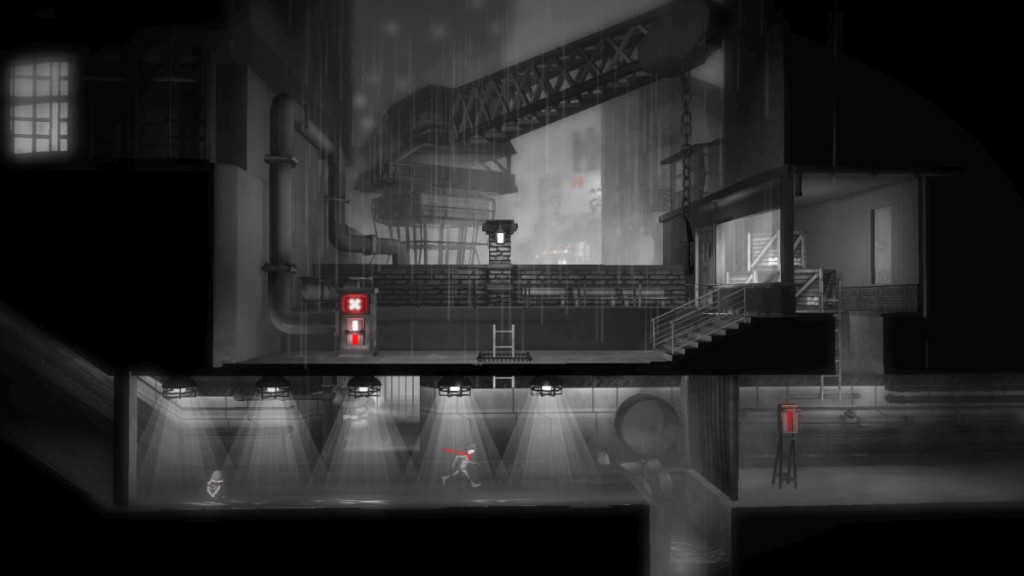 There were two sequences where water was being filled into a chamber and I had to move platforms and a wooden crate to stand on. In both cases, the water was rising quite slowly. It could be slightly frustrating, but again I have seen much worse.

At a later point in the game, something happened that I actually didn’t see coming. A brute popped out of a door (a typical entrance for them) and napped the little brother, then escaped in an elevator. There was actually quite a long stretch of levels where I was completely on my own.

In one of the puzzle pieces while on my own, I had to push three pack wagons of different heights from a right to left side while swapping their order, so that I could use them on the left side as jumping stairs. This required the use of an elevator in the middle where the pack wagons could be temporarily moved down so that another could switch side. When I first saw this puzzle I thought I was going to be in hell. Anything looking just remotely like a Tower of Hanoi puzzle is usually very bad news. I still have nightmares after the one in Reah. I’d rather have a slider puzzle instead, that’s how bad it is. But to my surprise this swapping puzzle was actually quite easy and I barely needed to think about it.

The long stretch alone culminated in a visit in a sort of science fiction child container storage facility with an enormous eye boss. This turned out to be a run-and-cover sequence, a little bit like the Scarecrow levels in Batman: Arkham Asylum. If I was in its line of sight for too long, it succeeded in warming up a red power surge from its eye, instantly killing me. As always with this kind of stuff it felt a little bit too strict and slightly frustrating. The kind where you let out a sigh each time you make it to safety. 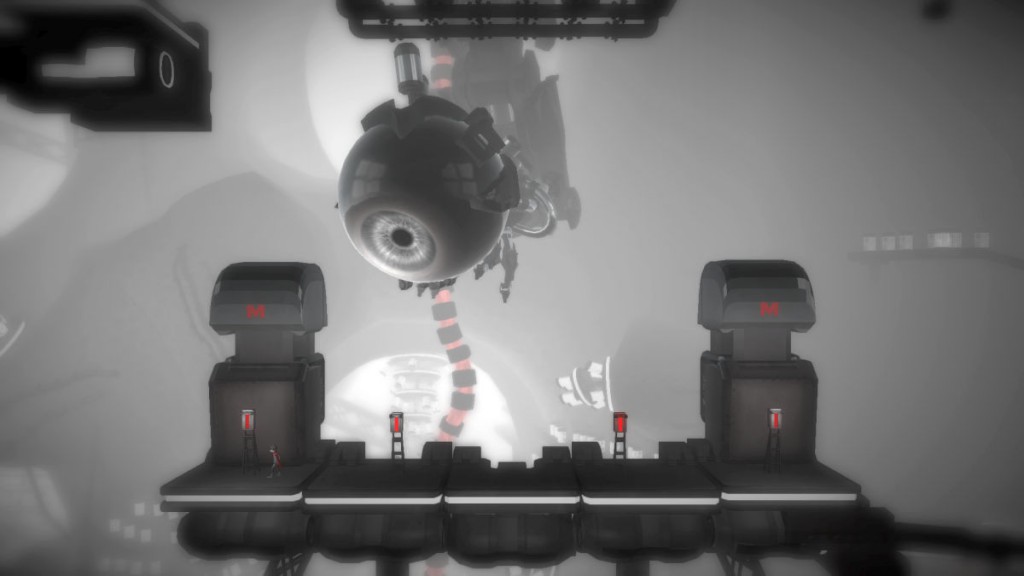 And to make matters even worse, there was a last part where a set of platforms had to be lifted in a very specific order by flicking a set of switches, all while the eye boss was trying to make toast of me. This was probably one of the hardest puzzles in the game.

Shortly after that puzzle I kicked down my brothers glass container and escaped the facility, straight into a snowy landscape. I actually thought this was the end of the game and was getting ready to read the end credits rolling up. It was almost disappointing watching the brothers get captured by another brute just a minute later. And then brought into a zeppelin, through a chamber with true colors. Green trees!

The final stretch after the cell felt a little buggy. Little brother sank halfway through a big cog belt and was no longer reacting to his surroundings, and there was a platform outside the zeppelin that was only in the right position after I died once. It also felt more punishing than usual.

The last switch-and-machine puzzle was the cargo hook above the glass roof. Lots of retries here. Figuring out how to adjust the hook to allow for jumping with the brother on the back was easy enough, but the crosswise jumping on steep ledges down below required a big leap of faith.

And I really wasn’t a fan of that ending with the squid boss on the pipe. Generally too difficult. True, it was possible to learn how to time the jumps away from the telegraphed squid slaps, but then it was also complemented by a tense memory fire trap sequence, and then followed by another round of avoiding tentacle slaps. I completely lost count of how many times I died there, but it was a lot. It felt like being right back in the harder games of about 10-15 years ago, and I don’t necessarily want to go there again. 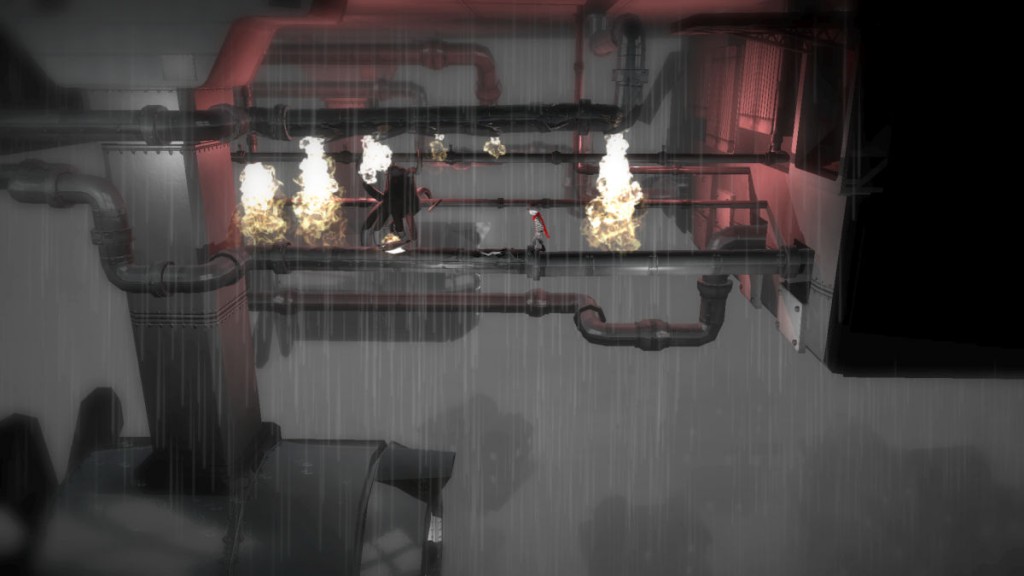 But running back and opening a door for a brute to finish off the game was okay. Pipes and the zeppelin motors crashed and burned. Even the protagonist fell down, accompanied by end credits. It was okay with me, I guess. Somehow it fit the dark tone of the tale, and the little brother was saved earlier by putting him aside on a platform while the zeppelin took off.