I didn’t really like this one all that much. Although I’m fully aware that I played it 9 years too late, it still felt somewhat uninspired. I played the original SiN and its expansion pack back in 2002 – didn’t John Blade used to come with snappy wisecracks? In the less then 3 hours it took me to complete the game, I think he barely said 10 confirming words. The level design was the typical oldskool linear style where the level itself sort of tangled into itself. That corridor or the room I barely saw past that fence or through that window earlier? I knew that eventually I was going to be there in 10 or 20 minutes. 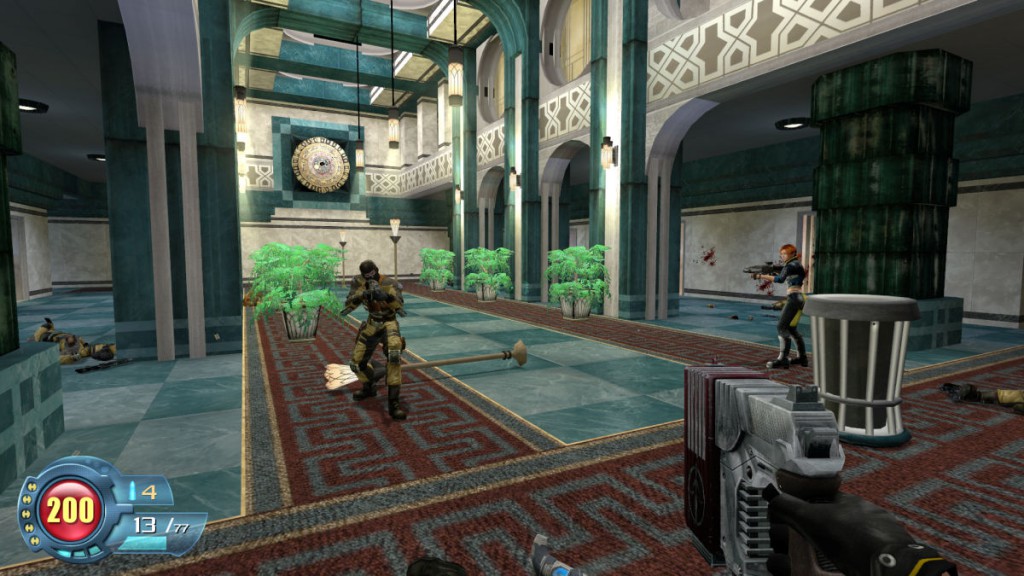 The worst part was the difficulty, though. It was not only rock hard, it was extremely punishing. I was never a fantastic FPS player, but this game certainly made me feel like the worst of beginners. The type of FPS where the enemies always hit you perfectly and drain a good chunk of health each time. Later, bad ass bullet sponge armor soldiers popped up with miniguns, just as I thought it couldn’t get much worse. About halfway through I had enough of that nonsense and turned on GOD mode. It’s funny, because the game did have two of the most intricate difficulty selectors I have ever seen.

The difficulty selectors could adjust both challenge and assistance given, and both of them were completely smooth. It felt strange that the developers had used some time polishing this part of the UI, because the title screen itself used a very boring and static font. It looked like a tight deadline. Or maybe they just didn’t have someone to make the title screen flashy. Well, at least the song there was cute.

The game used the same 3D engine as Half-Life 2 and also loaded its levels the same way – loading in the middle of running across a threshold. Apart from the typical linear level design of its time, it also used medkits as well as medical stations mounted on walls. The latter could even be recharged by replacing a canister. You could smash crates for more medkits and ammo, and it had quicksave. Jump puzzles were few, and barely of the sort of jumping on pipes or across drops outside a tall building. Jessica, a red-haired companion, sometimes came along for the shooting and I never saw her die. There were a few places where I had to make a stand while waiting for a gadget to hack away a force field. 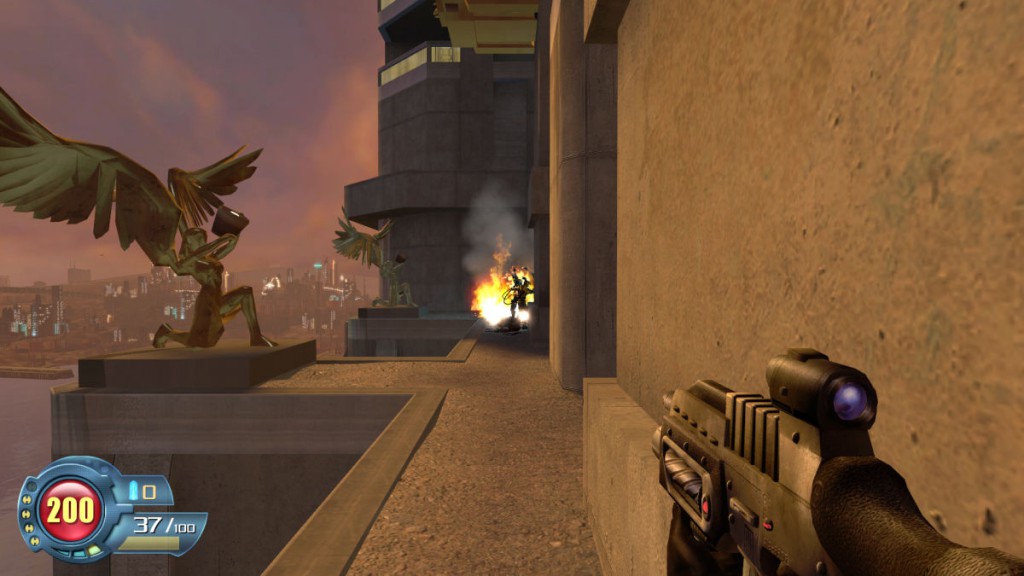 I was really missing some kind of cool powers to counteract the difficulty, but alas, Blade didn’t really have any. Sometimes I could break a container and sniff green gas to enter some sort of heightened state (or worsen it, I wasn’t really sure) but it didn’t seem to make much of a difference. And to make matters even worse, the three only weapons in the game were all meh. A pistol, a shotgun, and an assault rifle. No plasma rifles, no RPG, no rail gun. A thrown hotkey grenade was all right, though. It both exploded and then burned the still surviving enemies. The problem was, these weapons felt like attacking with cutlery against the tougher minigun soldiers, as well as two mutant mini bosses all made out of muscle.

Let’s just say I wouldn’t put this game inside the typical 6-9 range.