This was much more of a platform game than I thought it would be. Descriptions of it led me to believe it was very much an adventure game with just a tiny bit of rare platform action required, kind of like some of the first polygon versions in the Broken Sword series. But platform action turned out to not only be quite prevalent, it also made the levels feel bigger than they really needed to be. The platform action was very light, as in definitely not difficult, but there was a lot of walking up and down ladders, jumping ropes, and pushing objects. It often felt a little overwhelming.

Three switchable characters had to be navigated independently, adding a lot of backtracking. Sometimes the two others automatically joined across certain level thresholds, but most of the time I was yearning for some kind of “recall party” or “follow me” function. The collaboration between them was quite good, though. There were lots of puzzles where two or three characters were required in different locations to make it work. Because of the big levels and the abundance of ladders and corridors, there was a long stretch between the few NPC that lined up what needed to be done in that particular area.

I only played the game single player and chose the scientist, the monk and the time traveler. They each had special abilities. The monk could do close area telekinesis, the scientist could hack computers to open doors, and the time traveler could zoom through metal bar doors. The abilities were rarely used except inside a personal level for each of them, though. Most of the time things had to brought together and puzzles solved that any of the seven characters could do. Tasks could be like gathering three mine karts for a crazy miner, or pushing a boat across an island through underground tunnels.

There was a funny narrative start – the cave itself was talking and also had a sense of humor. Humor was rare, mostly because of the long distance between NPC, but it was often spot on and made me laugh several times. Graphics was great and looked a bit like an ant farm, especially when it came to the water pools. The characters themselves never spoke, but they could at least utter “uh-uh” when trying the wrong interaction. Choosing the three characters felt strangely open, until a bridge collapsed below three characters brought on top of it. From then on those were the three chosen characters. 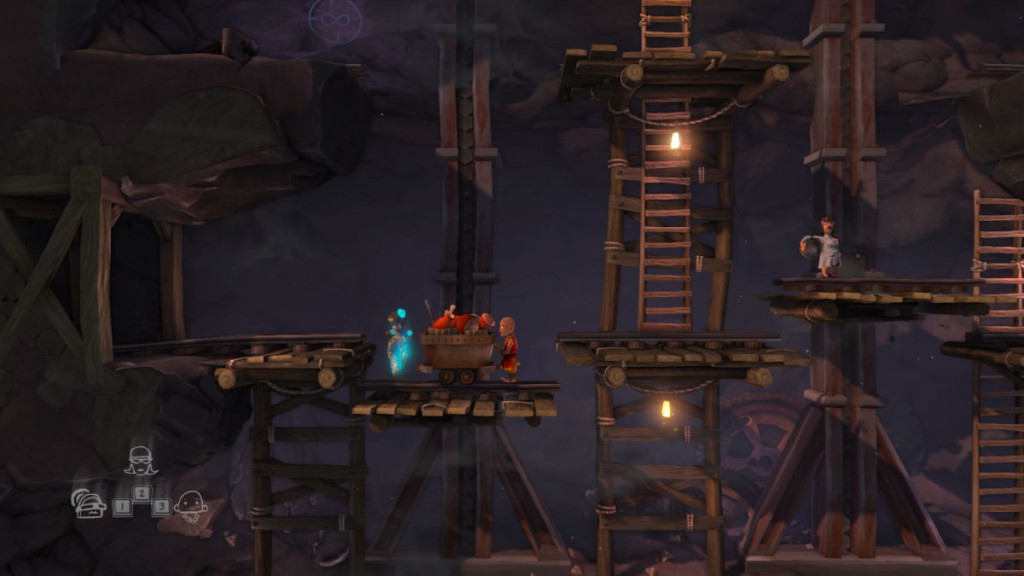 There were bright decals here and there that, when clicked, showed one cartoon strip window. The story itself wasn’t really all that interesting, but I liked the personal levels for the characters. The monk had to climb up a mountain and go through three tests, the scientist had a nuclear missile to launch, and the time traveler had to navigate her level in the stone age, the present, and her own future. Only one item could be carried by a character, but luckily the areas in the game always supplied the items needed. No need to bring that bucket along. And death was just a respawn a few corridors away.

I never cheated in this game but I was stuck a few times. The first time was the third mine kart. Took me a while to see that I had to ride it and then maintain view on that riding character, in order to use the shovel for flipping a switch. The way the camera just swayed back to the other entrance kind of threw me off. 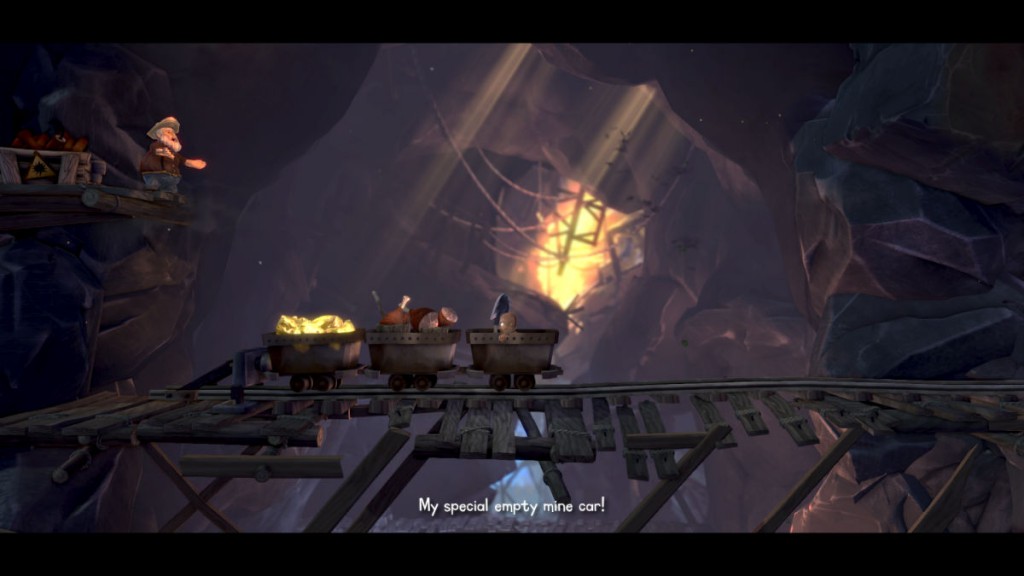 There was an exit part – I think it was when leaving the time traveler area – where a key had to be used for three doors in a row. I was silly there and dropped the key after each door, believing it was a one time use. The developers had thought of this specifically, because one of the other characters always picked it up and brought it along until all three doors were opened. I love foolproof design like this.

I was really surprised when my scientist was grabbed and eaten by a dinosaur! At least I thought she was. It turned out to just be part of another puzzle. The dinosaur was laying in a spot and always flung my characters behind it. The dinosaur itself had to be lured onto a fragile bridge. You can probably guess why. 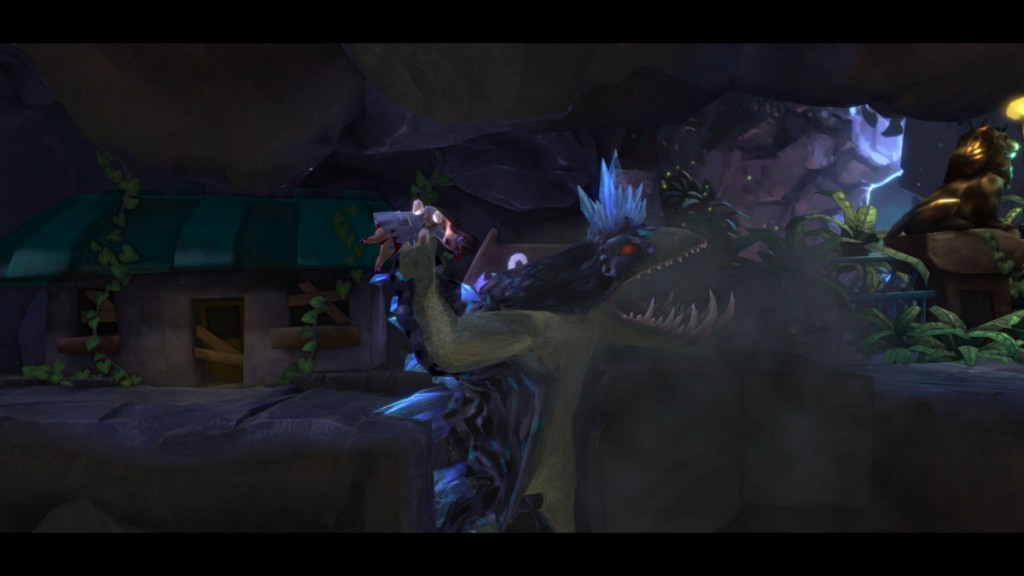 There were repeated puzzles about reproducing sound. One was getting batteries for a tape recorder, then recording the growl of a dinosaur to get the attention of a hunter. Another was keeping a parrot close to a dog to learn its barks. The latter was the second time I was really stuck for a while, by the way.

Some puzzles were a little too far out for my liking, like making the scientist hack a vending machine to open a secret passage. Others were just up my alley and made me more than just smile, like moving a sign about a wet and slippery floor to another location, after which the male scientist there slipped off the edge. It felt like that idea came straight out of a Pink Panther cartoon.

I was glad I didn’t have to do the door codes puzzle in the scientist area, though. The proper code for the correct day of the week illogically still didn’t work, but then I saw it guarded an iron bar door. Not a problem for my time traveler. Bye bye, illogical door code puzzle.

The first monk test carrying the flower was extremely demanding, perhaps too much so. When you know what to do, it’s all right – but I agree it’s a lot at once. Not only did I have to walk slow, I also had to turn my back to the wind, and then close to the pedestal I had to telekinetically close the window. At first I thought I had to close the window first of all and then “hurry” by alternating running and walking. I could get awfully close that way, actually. 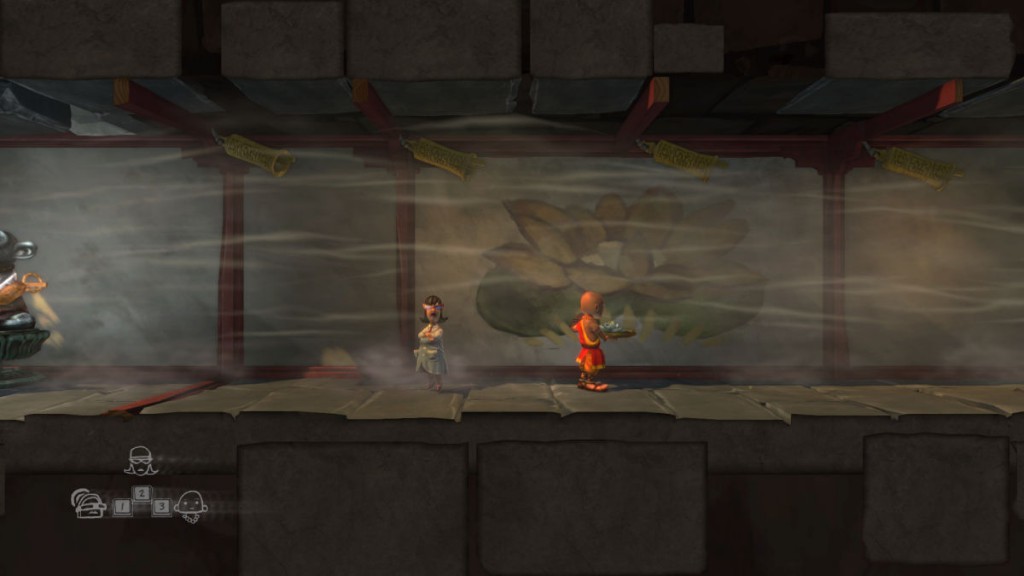 I totally rocked the water jug puzzle, though! I’ve probably seen this puzzle too many times, both in older adventure games and in movies, but I’d still like to boast about solving it in seconds. No need for a web site solution here. And yet the cave narrator claimed I did visit it! The bastard.

All in all a nice light platform game with adventure game puzzles instead of requiring twitch and jumping skills. The levels were a bit too overwhelming at times – especially in the beginning – which kept me from wanting to complete it more than once. I probably missed out on some cool personal areas, but I also have a massive backlog of other games to play.