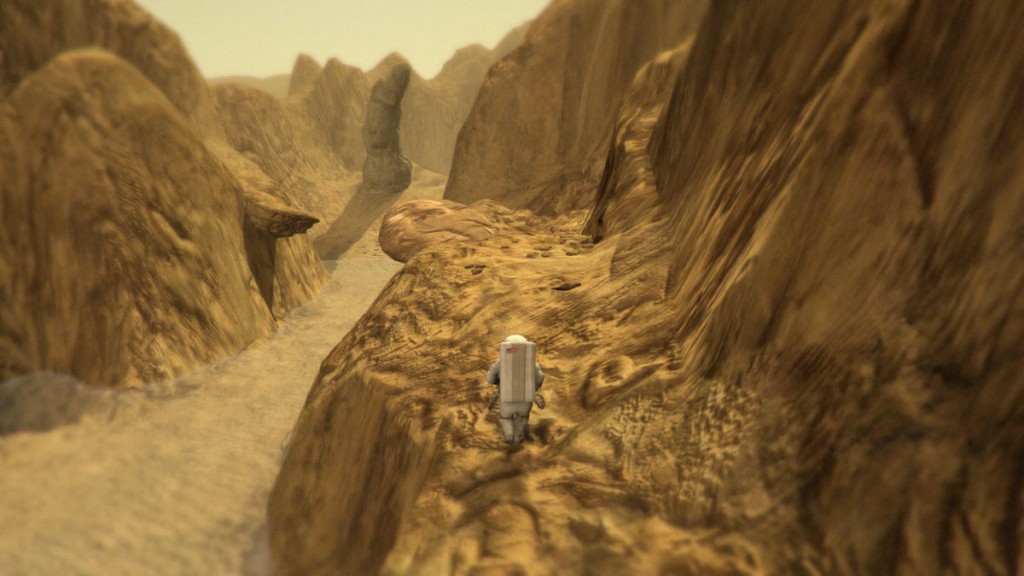 The astronaut sometimes ran out of oxygen and had to find e.g. a pressure flask, but this felt strangely infrequent. There was a very large stretch at one point where I wondered if the developer had completely forgotten about this mechanic. And each time a low oxygen warning finally appeared, it was typically in the beginning of a new level with a refill within sight. There were a lot of Russian logs to find, green foot prints to follow, and sometimes the astronaut muttered a few concluding words to himself. Areas were quite varied – it wasn’t always just a barren landscape, and sometimes it was also night or inside caves.

It didn’t take long before a theme occurred with Russians having arrived earlier through a portal leaving behind now abandoned towns, structures and electricity lines. The story was told by the Russians in found audio logs, but the story wasn’t really all that interesting. The epic atmosphere and the exploration completely eclipsed it for me. 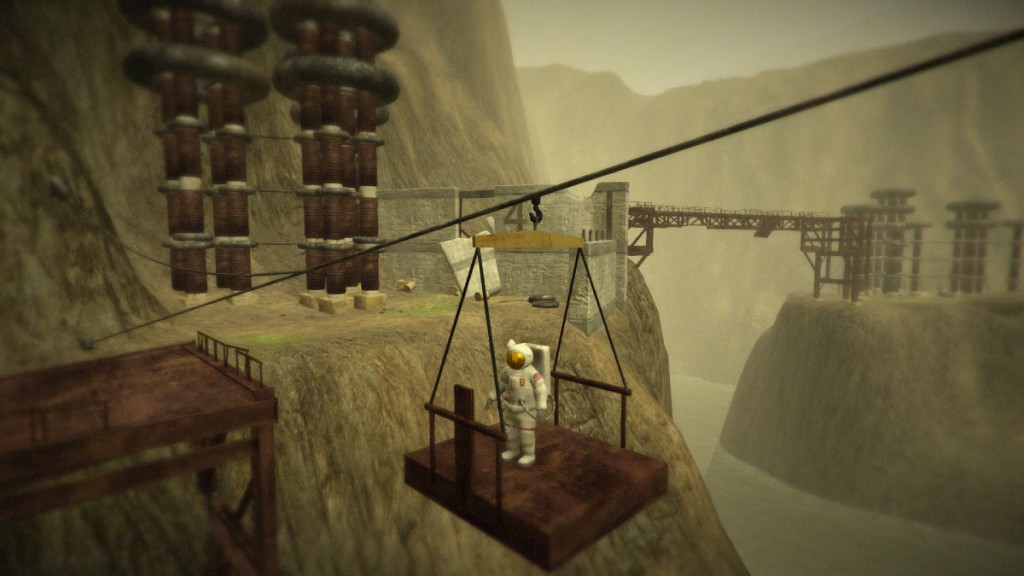 The game was good at offering new strange alien life, pretty much all of which was stationary, like plant life. Some were dangerous, like plants grabbing or shooting up sticks, while other shot out horizontal tree branches that could be used to cross over.

There were also big thistles to jump on that would telegraph a red glow and eventually close around the astronaut, but the duration here was curiously long. I actually had to stay still for many seconds at one time, just to verify that it would actually do this.

There were smaller puzzles about pushing a stone on top of a geyser to make another gain enough pressure for jumping higher. At another place, in a lava maze that was harder to navigate than normal, a lava geyser had to be blocked to create another that would topple an electrical tower. 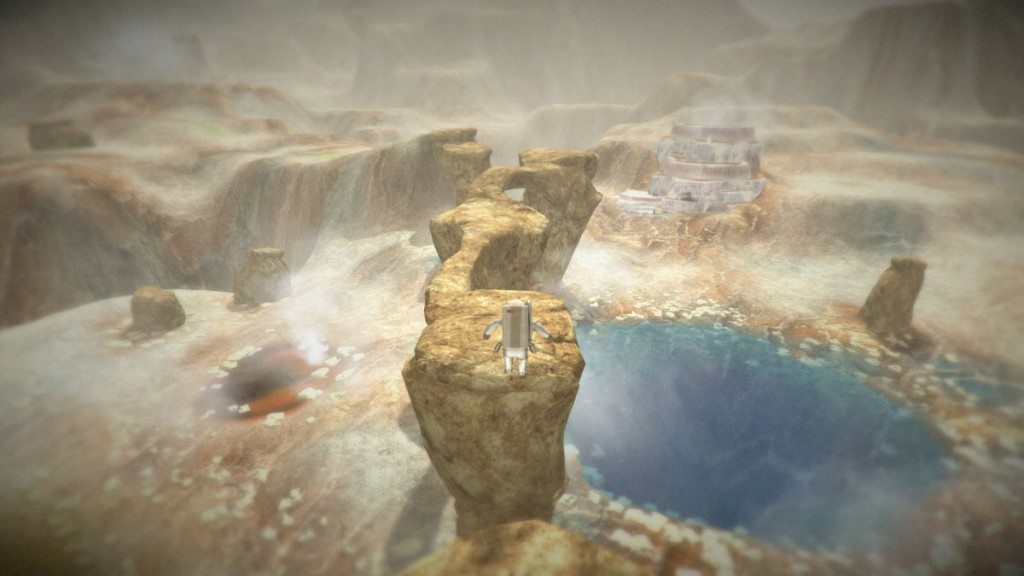 The areas were big and usually had mountain edges or very deep chasms to prevent me from going exploring where I wasn’t supposed to. It generally worked well. Nevertheless, I actually managed to find one invisible wall in the game! It was in the big crater level not far from the end. One of the crevices had a clear invisible wall in it. What a sad exception.

I had a wonderfully lucky death then respawn combination in that same crater. There was an elevator line where the button was down in a deep crater crevice. I went down and clicked it. I then knew I had to make a lot of exhausting jumps back to the edge where the elevator was, but I fumbled and fell down from the first jump. Then I respawned right next to the elevator platform. Thanks! 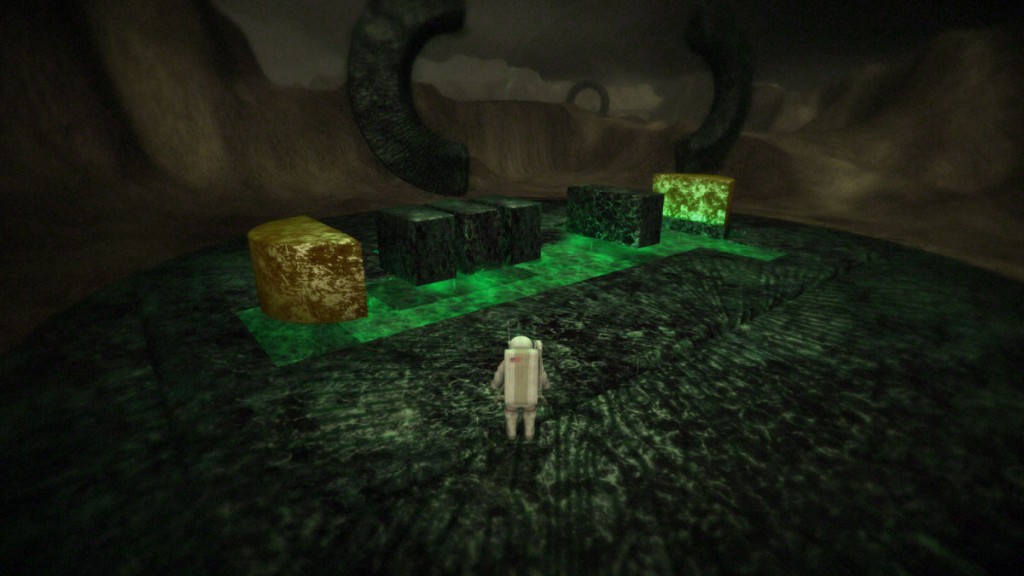 Most of the actual puzzles in the game were extremely easy. Stuff like e.g. press the three correct buttons on this alien door. Took less than a minute to figure out each time. There was one exception that stood out as a genuine trial, but even that wasn’t particularly tough – just unexpected. It was the one where stone blocks had to be pushed into placeholder sides to clear the path for two circular stones. Pushing those stones together then turned on an alien light bridge structure.

This game got 59 on Metacritic!? Don’t you like jump puzzles? Oh, wait. Most don’t, that’s true. Still, this game had an awesome atmosphere and I had a good time completing it. More like this, please.