Completed this visual novel in three sittings and about 4-5 hours, including a small extra story.

Apart from a brief experience with a Phoenix Wright attorney game some years ago, I’ve never really tried a visual novel before. I always wanted to though, to see what all the fuss was all about. I finally decided upon this one because of its science fiction theme, and because it had received a user rating of overwhelmingly positive on Steam. Also, I bought it cheap in a sale.

I must say right away that although the story and dialog was well written, the game itself was too easy and non-existent for my general liking. I want some more influence over my games. I think this visual novel was close to be called kinetic, i.e. you just advance the dialog and make no choices. This one did have a rare choice once in a while, but it felt like 98% pure storytelling, advancing self-typing dialog lines.

The story was about me, a teenager in 2050 (which looked exactly like today only with androids) who finds a hi-tech female android in a garbage dump, gets it repaired, and brings it home to spend some time with it. Originally he hates androids just like his father, but Lucy Valentine, as the android is called, is remarkably well engineered and soon changes his mind. 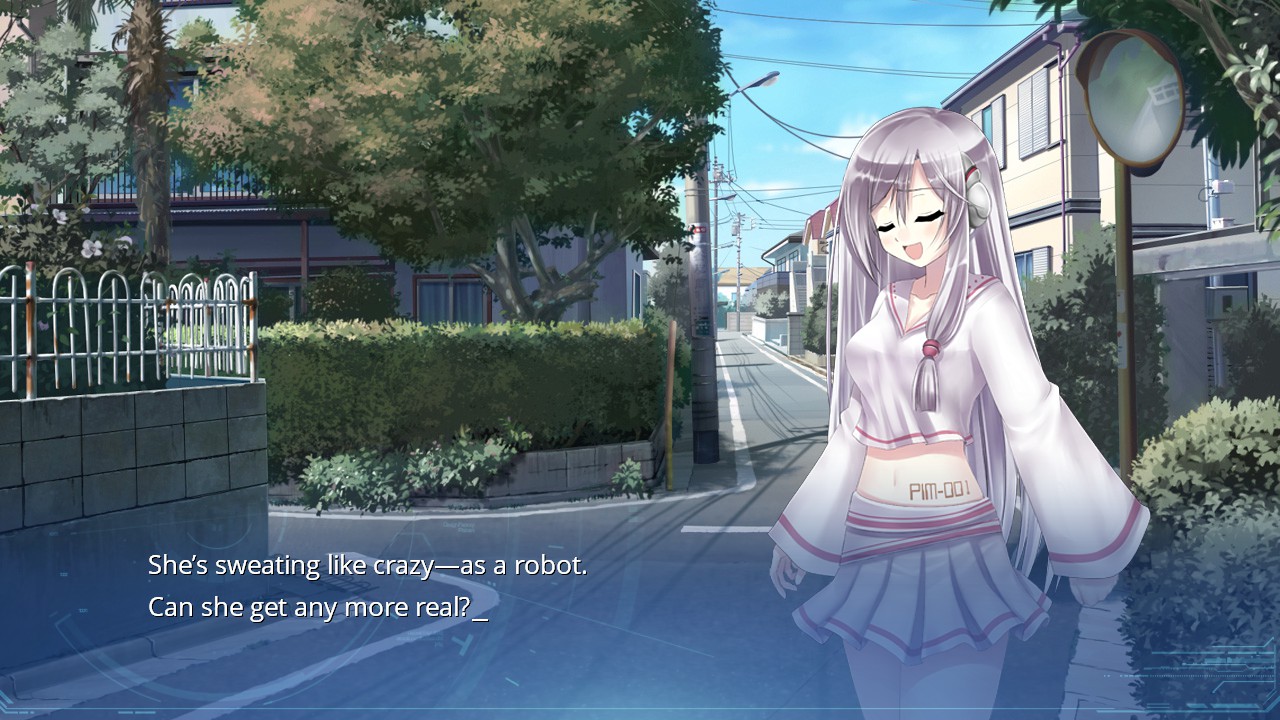 It’s only a superficial dating simulator and doesn’t have any sex. There’s even some philosophical dialog at times, usually as the teenager thinks to himself, or in long debates with the android so eager to please her master. The father, however, absolutely despises androids and instigates several quarrels with his son. Without spoiling too much, the story has a sad ending that even moved a mountain like me.

Lucy Valentine sometimes made me think of the Ray Kurzweil book, I had just read.

Although the dialog itself was well-written, it was also a bit much. Sometimes I was thinking, you’ve already said that several times in a row now. Let’s get on with it. Yes, you’ve already told your farewells. Only Lucy herself actually had a voice-over. It was in Korean, but simultaneously translated in the self-typing dialog line. It was emotionally well acted and it worked fine.

The backgrounds were well drawn but void of animation, apart from one or two persons superimposed on top of it. At times some kind of action was supposed to take place, like Lucy preparing food, but the table was always empty. You just had to imagine it being done as described by the dialog, and sometimes by the excellent sound effects. I especially loved the sound of the repairman typing on a calculator.

The background music was usually calm and relaxed – enough to be viable for elevators.

The screen transitions were amazingly varied. Sometimes it was fading in a circle, to the side or in a spiral. I especially like the blinds effect that looked like something straight out of a Commodore 64 demo.