This is another post in my series about the odd games that I have decided not to complete, although I will at least try them out for up to an hour or two. Sometimes it also includes games that I did complete, but were too short to warrant writing a separate blog post about them.

I actually completed this one – but since it didn’t even last an hour, I decided to put it here anyway.

It was an old fashioned node adventure – that is, moving node by node, like in the classic Myst. It only took place inside a small wooden cabin. Everything was browner than Quake. All I could do was click on things to hear the protagonist talk about Serena, his wife now for some reason absent. 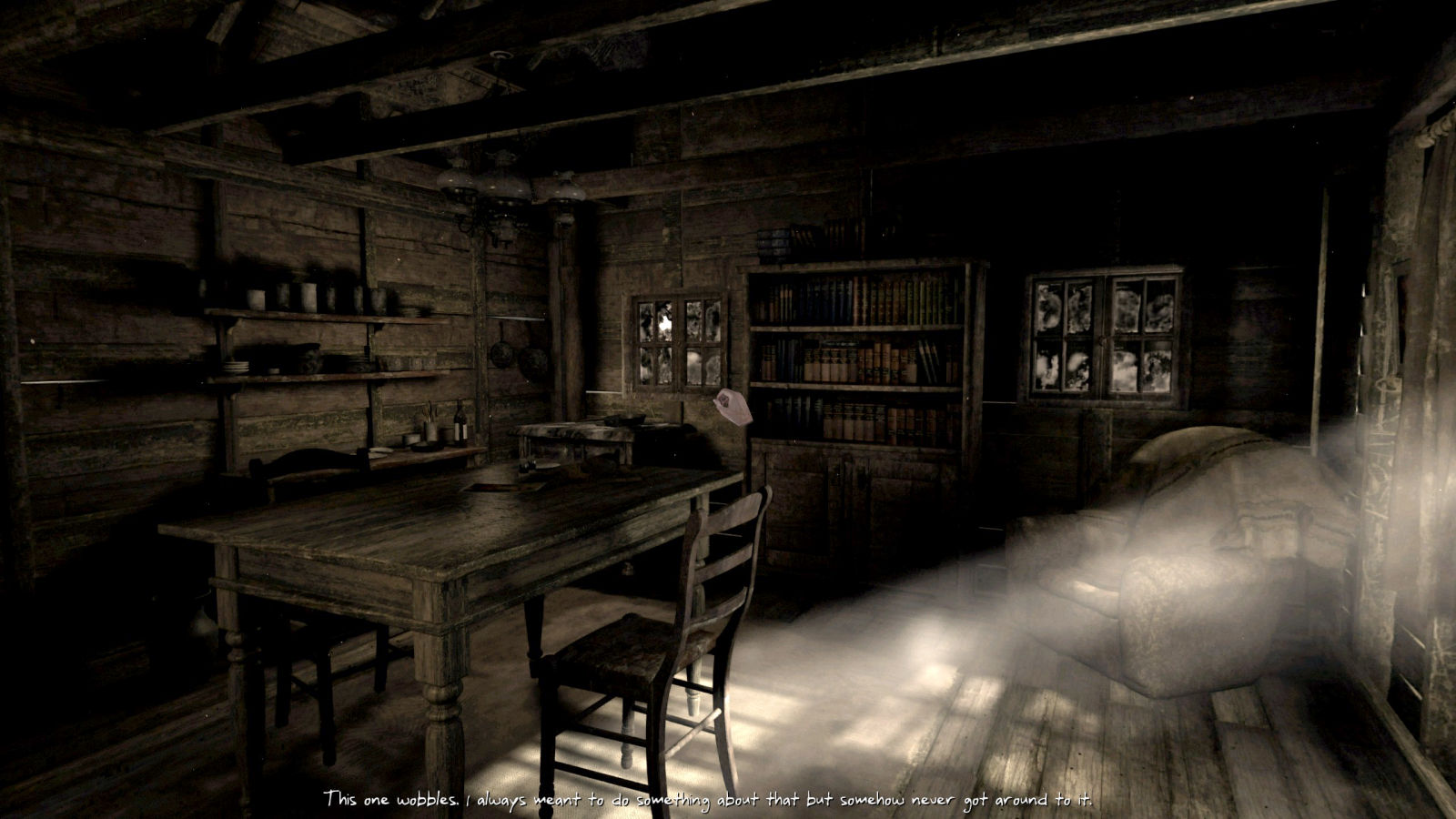 There was some progression, however. After clicking on everything in the cabin, the protagonist changed his mood and now had an entirely different opinion of Serena, which in turn changed all the descriptions. It even had two occurrences in the end I didn’t see coming.

Still, it was a shallow experience. I’m not even sure you could call it a walking simulator, as all I could do was walk three steps to the other end of the cabin. Perhaps linger simulator would have been more apt?

This War of Mine

I’m going to have to skip this one. It looks fantastic and the user interface is solid. I’ve heard great things about it. But alas, I’m not into stealth survival simulators with resource management.

I’m not even sure why it was in my Steam library. Did someone gift this to me?

I played about half an hour of it. Everything was viewed from the side and the graphics reminded me of Mark of the Ninja. I was immediately thrown into a simulation of crafting, lockpicking and digging through trash piles. Lots of action icons all over the screen. I could switch between three persons – one was slightly sick but a great cook, another a fast runner, etc. The animations were very smooth, truly excellent. 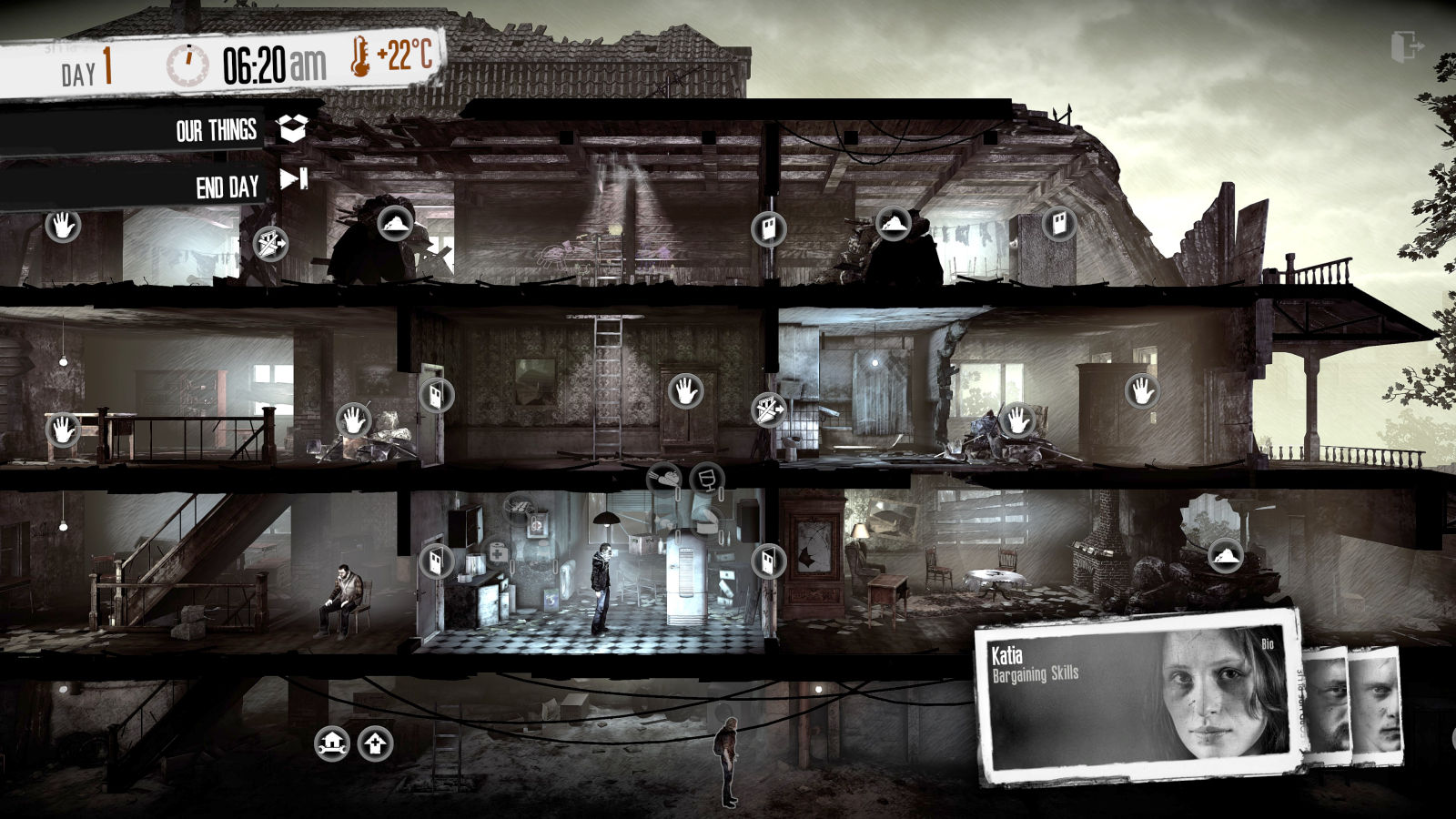 I kept acquiring resources and then night suddenly happened. I chose the woman (Katia) to break into a house, hoping not to meet anyone. I searched a bit for valuable resources – and then I quit the game.

In another universe – one where I’m into these sort of games – I would probably have loved it.

I’ve always been curious about this game ever since it was released. It signaled so many elements that was just up my alley. A dirty science fiction city. Climbing like in Tomb Raider. Interesting memory puzzles. It looked like Messiah meets Beyond Good & Evil – both games I completed and liked a lot.

I played almost two hours of it before I decided to abort.

I did actually like a lot about it. The story was captivating right from the start with what looked like memory rape. The huge city of Neo-Paris in 2084 was incredibly detailed and dashing in all its density and disrepair. Climbing around was outright Tomb Raider navigating the edges and ledges almost everywhere. The cutscenes were well directed and the lip sync used by the 3D models was quite good. 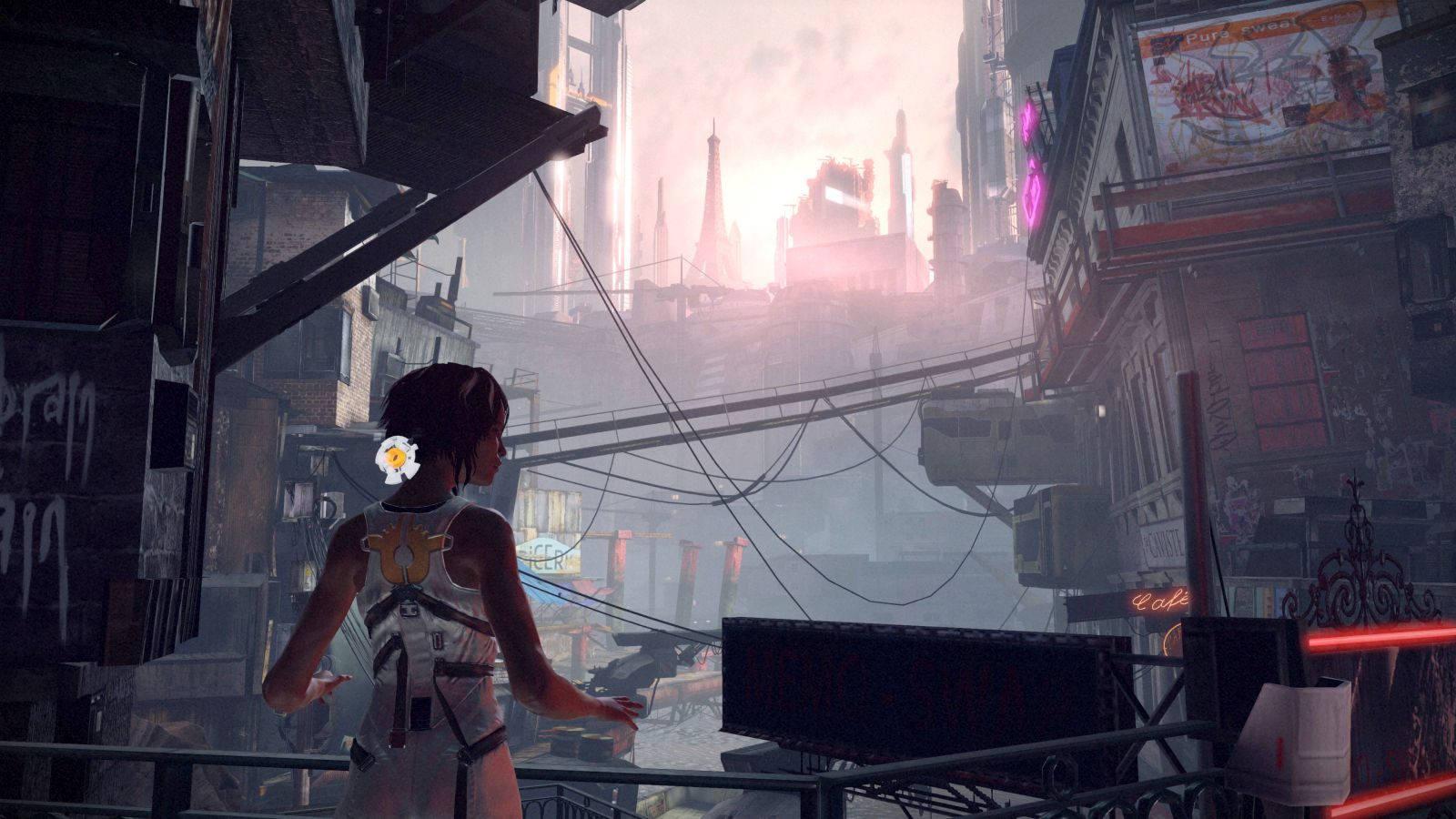 The first and only memory puzzle I got through was “Remix Olga” – changing a woman’s memory of her boyfriend being cured by a doctor. I had mixed feelings about this one. I had to rewind by rotating the mouse and activate “glitches” to change her memories, eventually making the doctor kill him instead. The controls seemed a bit clunky, but I also learned to be patient spotting and activating glitches.

Some things were disappointing, like how extremely linear the city was. There wasn’t much room for exploration at all. But the one thing that eventually made me quit was the combat system. It did look good, making for a nice first impression. Fighting against a group of baddies felt like the fighting in Rocksteady’s Batman games. The heroine I was controlling easily cartwheeled around her opponents. 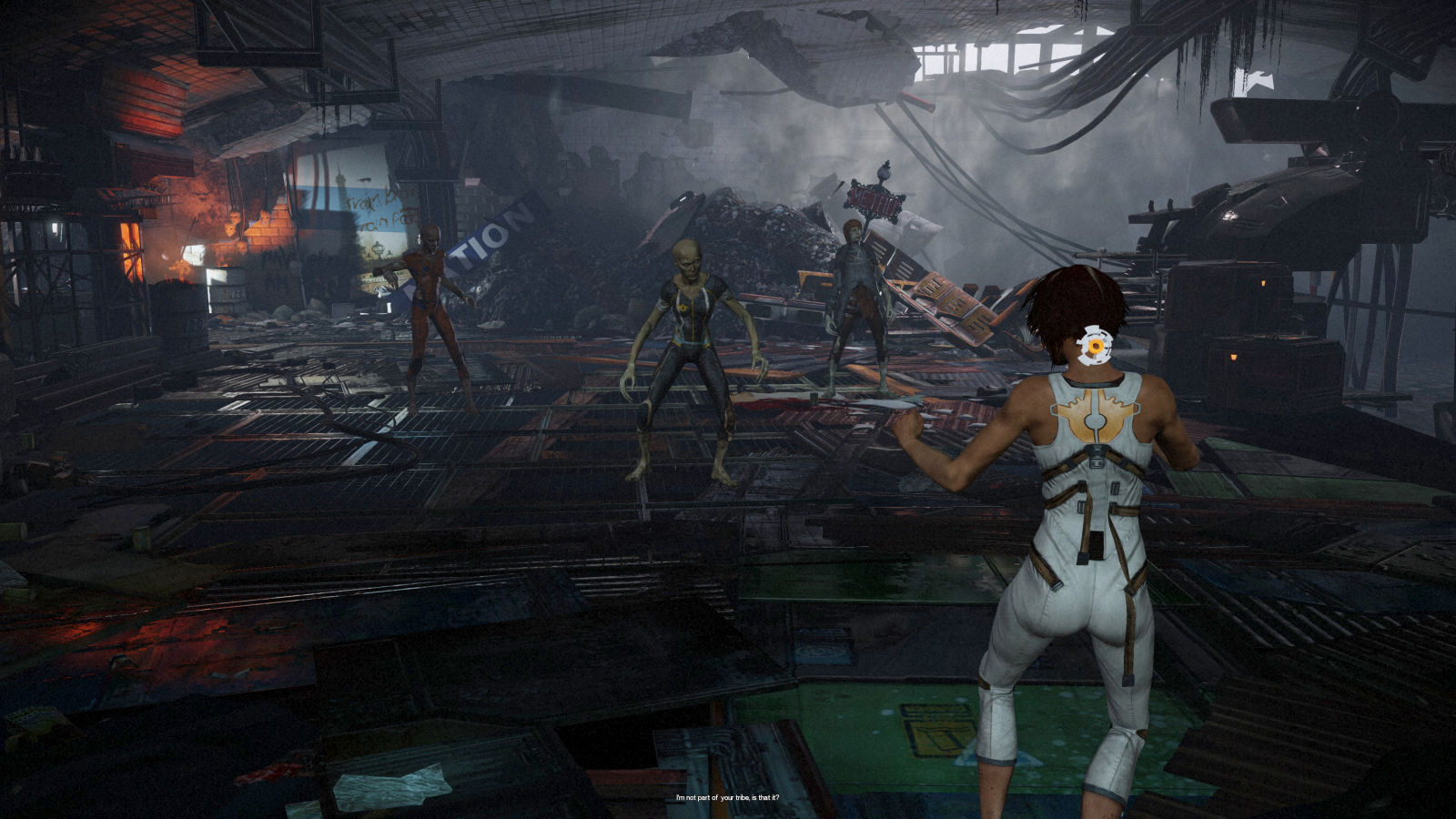 However, the combo system seemed convoluted with a lot of icons to be managed and selected.

I did reasonably for a while against city dwellers mashing buttons, but when I lost twice against two waves of cops, I decided I didn’t have the patience for this combat system. The way the opponents were sponges made the fights take forever, and in spite of playing on the lowest difficulty setting I still died.

Maybe I could have learned it. I could see there was something about timing the combos right. But never mind. I decided the game wasn’t enticing enough to make me put up with that combat system.

This one was very simple – just fly in a wingsuit through procedurally generated maps. The longer, the more hazardous, the closer the calls, the higher the score.

And the only sound to keep you company is the hissing of the wind. 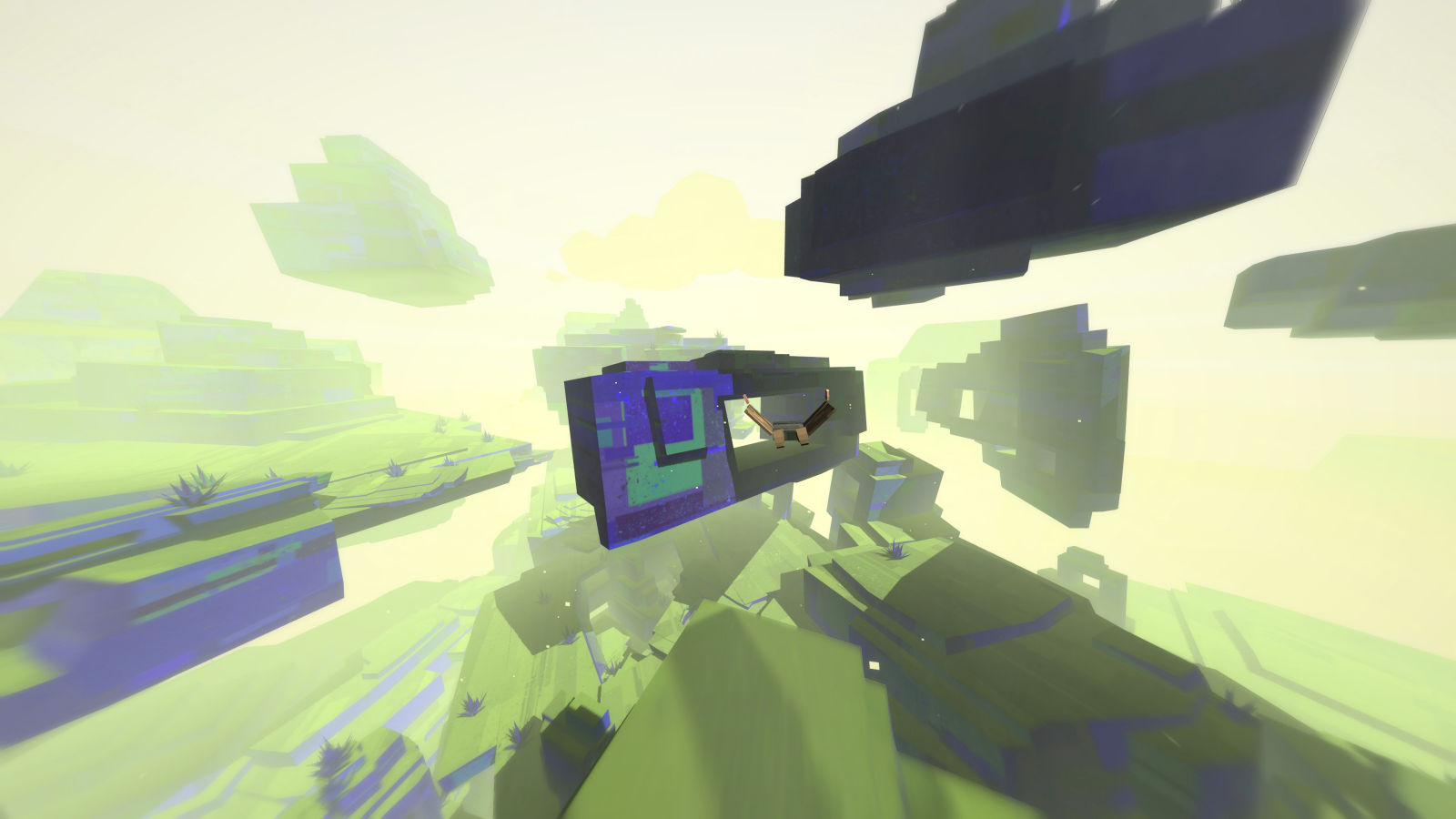 After the initial disappointment that I had to use cursor keys instead of the mouse – and that continuing away from the cliffs blacked me out and reset the game – I quickly caught the fun in it. Using the cursor keys was okay, and I learned that it was better to go down or around the cliffs than to steer away from them. There were also swirling rocks to portal me to a different map.

It’s not a game you complete, but rather return to from time to time to have another go.

This is one of the most overwhelmingly praised games in existence. If you look it up on Steam and browse user reviews, you’ll find pages of pages of pages of damn near exclusively blue thumbs up. I didn’t find one red thumbs down before I gave up browsing. Everyone and everything seems to love this game.

Except me. Too many things just didn’t click with me here.

First, the low polygon cartoon graphics with few details rubbed me the wrong way. I remember how much in awe I was about exploring the alien planets in a vehicle when I played the first Mass Effect. There’s much of the same kind of exploration here, but somehow the cartoon graphics just zaps that feeling away.

The game started near a camp fire. After talking to the local aliens in the village, I could lift out of the tiny planet in a shuttle and land on any planet in the solar system. The shuttle wasn’t easy to control and it was easy to die from crashing back down on the planet, or at one point even into the sun. There were leveling and auto pilot controls, but somehow I was still wishing for it to be easier to control.

The above combined with the ease of death by falling, not replenishing the oxygen, or one of a multitude of other ways to die, soon revealed another gameplay element that I really didn’t like.

Rewinding back to the very first moment by the camp fire. 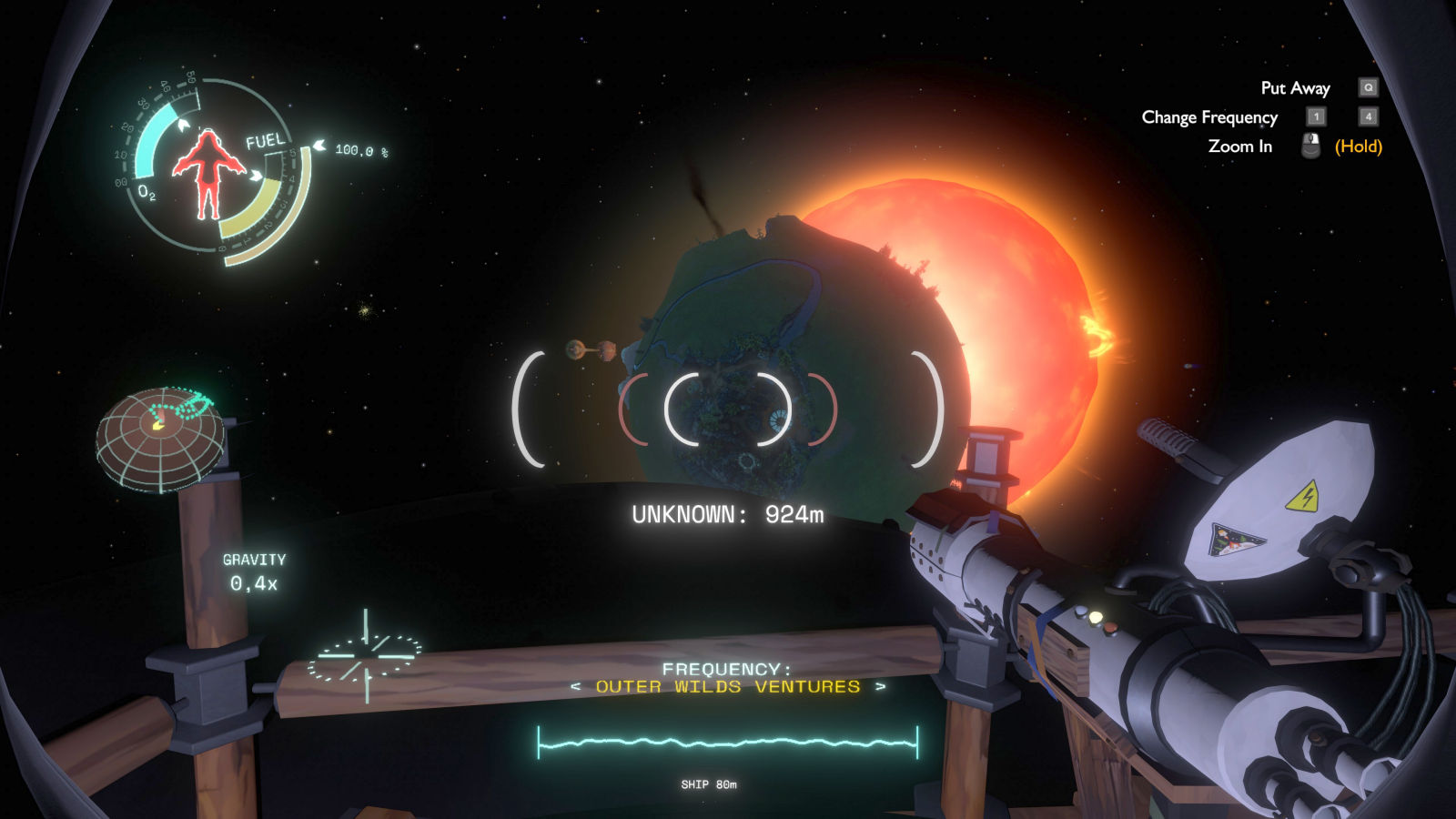 So I have to run up to the shuttle again, sit in the chair, thrust into space, and awkwardly land on the moon again, then run back to the spot I was exploring. Most reviewers claim this is sort of a charming Groundhog Day mechanic that fits into a game where the sun goes supernova after just 22 minutes, but I just couldn’t help being annoyed by having to redo all this every time I died.

It felt too much like it had a touch of roguelike.

I did like a lot of the other gameplay features, however. The tiny size of the moons and planets (often small enough to sense it when navigating them) was charming. The signalscope made it possible to pick up radios on other planets. And entering an area with trees automatically replenished my oxygen. I also liked when translating spiral lines on walls into text, and the 3D planet minimap was awesome.