As always, some stray observations from my first ~8 hours with the game.

The very first thing I was worried about was, believe it or not, the true LEGO colors. Fallout 3 used a heavy color filter which I felt help improve the strong post-apocalyptic atmosphere. But after a few hours of wandering about I can see that it doesn’t hurt it all that much. It does change the atmosphere somehow, but it repays it with epic sightings in true color, and it has also been awesome seeing the Sanctuary Hills buildings in the spot-on light blue color I often associate with plastic from the 50’s and 60’s. 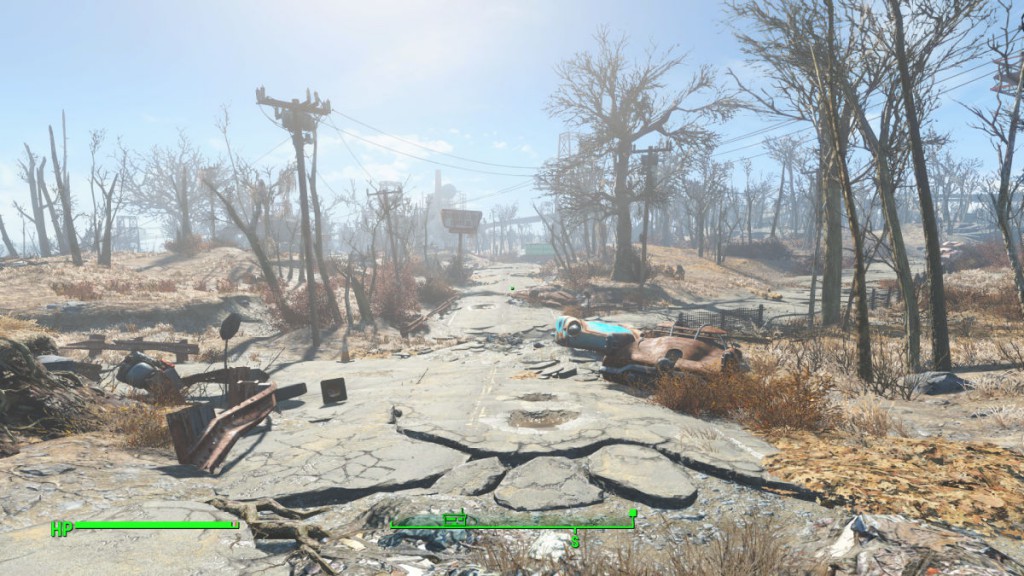 I haven’t done a lot of quests – barely one or two so far – and also limited dialog. The game now uses a dialog wheel much akin to the one used in e.g. the Mass Effect series. I’ve read a lot of negative opinions about this change in various forums, but personally I’m leaning slightly towards it being okay. That sort of dialog wheel have always felt like having associative cues in the head of the protagonist of what to say. I also really like that the protagonist is talking now. I’m so tired of mute protagonists in games – that mechanic deserves to die in games like these.

Level-up sure has been simplified. One measly point to spend on everything – attributes or perks. Talk about dumbing down. It seems to work well enough in expanding the character, but I’m not fan of the enormous perk poster that has to be pulled upwards to see all the perks available. Surely they could have made it all fit onto one screen?

And regarding the UI, every negative vibration on the internet is pretty much correct. It really is a mess. You could argue that the lists are divided in the Pip-Boy in a way that fits the style of the device and the game, and I guess the transfer lists for crafting and shopping are also okay, but the keys for the PC version are completely baffling. Sometimes Esc quits a menu, sometimes Enter (luckily E doubles for that) or even Tab. Arrow keys are used for settlement crafting and dialog wheels instead of just WASD. It feels like the keys used depends on what part of the team was working on it. Absolutely not okay. 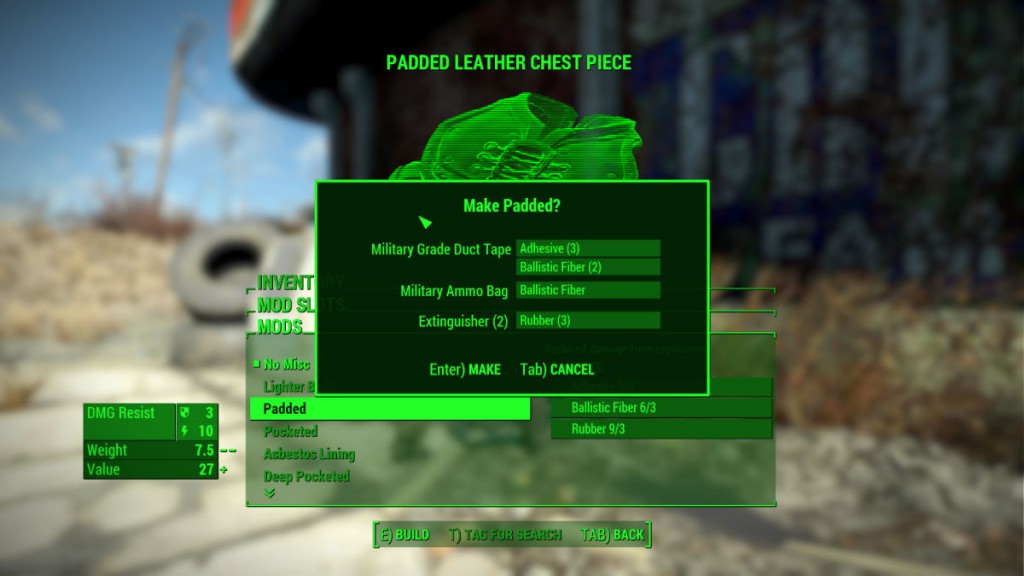 And what’s up with melee attack and throwing a grenade on the same key, only distinguished by the time I hold it down? I foresee a lot of silly accidents happening here.

I wish Bethesda would stop relying on modders to fix their UI and make a decent one from the start. It’s so annoying that they can always get away with crap like this.

Animations during dialog scenes have been improved a lot. I especially like the realistic eye animations. I bet Mass Effect served as an inspiration there.

The thing I like the least in the Pip-Boy is probably figuring out the armor pieces that the protagonist is wearing. The list quickly makes it a nightmare to cope with, which in turn just makes me want to sell or scrap unused armor pieces as fast as possible. A simple categorization mechanic would have worked wonders here, and I can’t imagine it would have been difficult to do either.

I have used the crafting tables a lot for modding my weapons and armor, and as such it works okay. I can get used to getting in and out of the sub menus, and it’s also very nice that all the junk can be dumped into the table with one key. So it’s not all bad. 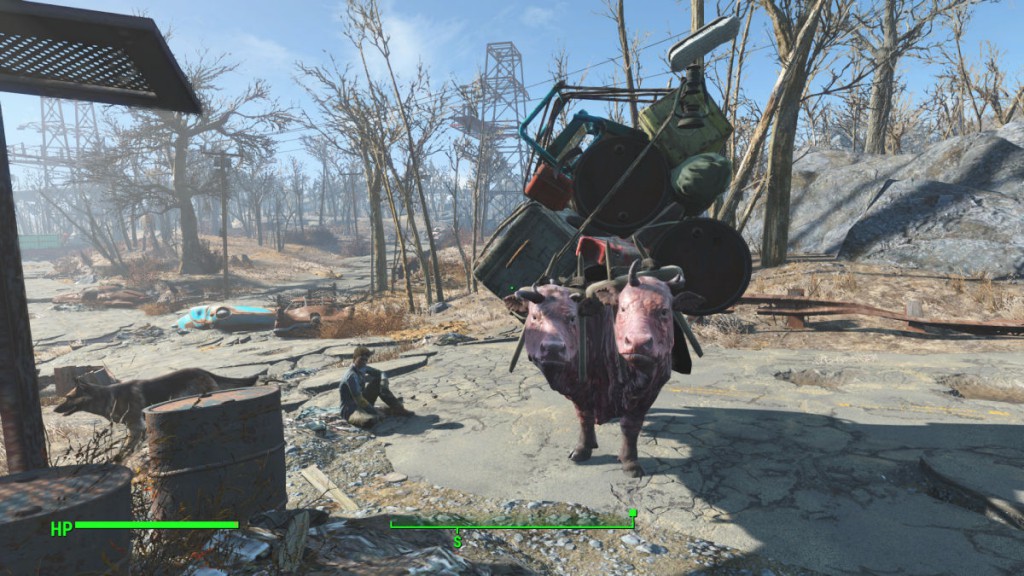 The thing with so much junk now being useful for crafting is both a curse and a blessing. It makes much more stuff useful than it was in Fallout 3, but it also has the danger of turning the game into too much of an junk collection simulator. I hope it’s possible to learn what items can be skipped later without having to learn all the crafting recipes in and out.

I’ve decided to totally park the settlement crafting for the time being, however. It seems to be another UI nightmare, and I’ve never really been that much a fan of housing in RPG anyway. I’d much rather like to explore the wilderness. Maybe when there’s not much else to do in the game I’ll briefly toy around with it just to see what the fuss was about.

Getting the dog as my first companion was way too easy. I barely left my vault and walked a few hundred meters down the road to a gas station, and there he was, immediately my friend as if I had raised the dog myself. I still remember finding the first Dogmeat in one of the first Fallout games. It was much later in a village, and I also had do a quest first. I’m all for making games a little bit easier than they were 10 or 15 years ago, but this is too much of a good thing.

At one point I stashed a lot of armor and stuff in one dresser at the first gas station. I then went on exploring for a few hours. When I came back later, the dog suddenly barked once and there was a message on screen about the dog having found something useful. I ran to find the dog with great anticipation. Maybe I had overlooked a treasure! Then I found it staring right at the same dresser I dumped a lot of armor and stuff into earlier. Bad dog! 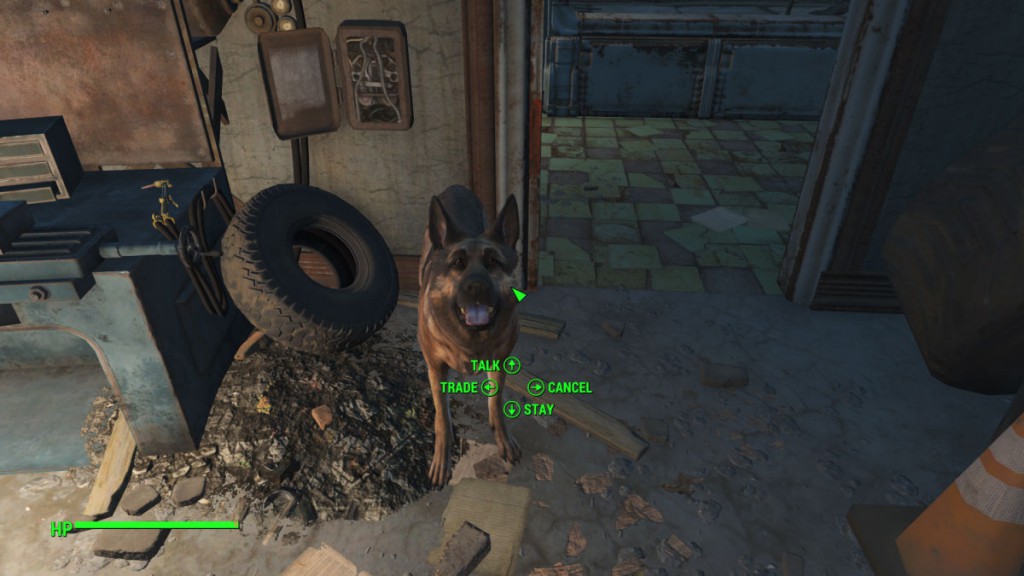 I must say that the dog is generally well done, though. It feels like Bethesda spent some time really studying how a German Shepard moves around and sounds. Lots of panting (which may get old soon enough) with a few smaller whimpers as if goading me to get moving. It can hold an inventory, be ordered to find things, and sometimes it will even do so by its own. I can see that this dog could be an awesome companion for dog lovers. I’ve also had him along all the time so far, but I’ll probably dismiss him soon anyway. I’m more of a cat person myself.

The shooting feels much improved compared to Fallout 3. Apart from now using slow motion in V.A.T.S., it’s possible to aim down the guns like in Fallout: New Vegas, grenades can be hauled by both sides, and the gun play feels more tight. Feral ghouls plunges toward me, and mole rats pop out of the ground.

By the way, it’s no longer possible to fast travel when encumbered in Fallout 4. Although an annoying revelation, I grudgingly have to admit that it makes all kinds of sense. But why did they remove repairing for all weapons and armor, yet still require it for items in the power armor? Shouldn’t it have been an all or nothing? It’s already enough of a hassle having to find fusion cores to keep the power armor running.

There will be spoilers from the first ~8 hours of play here.

The settlement crafting table in Sanctuary Hills initially doesn’t seem to serve much purpose the first time I found it. No real incentive to use it. Later, I rescued a team of Minutemen from Concord and they walked up to Sanctuary Hills, asking me to come along and help them rebuild the town. At least that was some incentive, but I still went in the opposite direction. As mentioned above, I’m don’t really care much for housing in RPG. Exploring is much more fun.

In Concord, the Minutemen gave me access to a power armor. It was again one of those moments where, just like with the dog, I wondered why it was given to me so early and easily. It was changed to a mech style of armor to enter from the back. I stood on the roof of a tall building and shot at the incoming raiders, but in hindsight that was probably a dumb thing to do. I had a hard time hitting them and used up all my minigun ammo in the process. When the deathclaw finally arrived, I was all out. Hitting it with melee didn’t seem to make much of a dent in it, but luckily the leader on the balcony could drain it with his laser rifle. All I had to do was endure. That “brilliant plan” ate my entire pile of Stimpaks, but I survived. 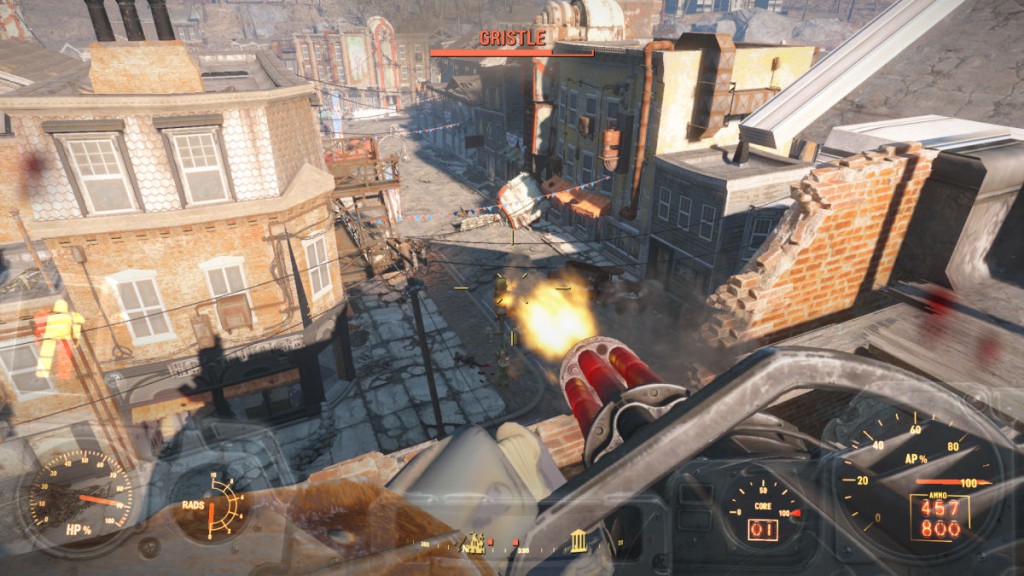 In the first vault, there was a Cryolator weapon in a box that required master lockpicking. Normally this is only possible to get after level 18, but I read on the internet that a bug could make the dog get it out effortlessly just by asking it to get me an item. That was too much of a temptation, so I went down and did exactly that. Then I discovered that I had no ammo for the damn thing. Luckily the dog had some in its inventory, but I only found out about that hours later when it was mentioned in a forum. I imagine it was some sort of meticulousness test, and I actually failed it.

I have had surprisingly few bugs, by the way. I’ve heard tales of sinking through the floor, low resolution textures, the Pip-Boy disappearing, and so forth – but I haven’t seen any of these things myself. Yet. Maybe I’ve just been lucky?