I tried this classic for more than half an hour. No doubt this was truly groundbreaking in 1997, when the game first appeared. It has real time events occurring aboard a train whether the protagonist is present or not – even a rewind option. The drawn graphics are clear and stylish, although how the characters are animated varies a lot. Sometimes it’s smooth, sometimes just two or three images.

Nevertheless, I’ve decided that too much water has passed under the bridge.

I should have been played it back in the end of the 90’s, or a least when I was visiting so many other classics some twenty years ago. I was always uncomfortable about the real time aspect of it. It kept me from buying it then, and even today I’m still not comfortable with it. Even with a rewind option, I always fear I’m missing out on something – it’s like I have some kind of anxiety about it.

Although the game controlled well in the cramped train with the use of direction arrows and contextual action icons, I wish it had spheroid node movement like other games of this time period. Sometimes it was a lot of work making sure I’d seen everything in a compartment. But that is probably my only complaint when it comes to the user interface and game mechanics.

The inventory was detailed, I could zoom in on objects in it (probably quite impressive in 1997) and the voice acting was excellent. At one point a conductor asked me to go to the restaurant car and meet up with someone. Knowing how the real time system would probably make him leave if I made him wait, I dropped everything I was doing and made haste. He didn’t seem impatient, but still.

This is probably all on me, but I’m just not keen on the idea of missing out on stuff if I’m not at the right place at the right time. Back those twenty years ago I would probably have played it anyway if I’d bought it, but now I just can’t be bothered anymore. Gentlemen, you may start your flamethrowers.

This third person action adventure with quests and RPG elements reminded me a little of the second Two Worlds game, which I enjoyed completing ten years ago.

Unfortunately, the game wasn’t quite up to my demands when it came to the quality. It felt both insipid and unpolished, like a budget game. My character had the power to use both terraforming and telekinesis, but they felt somewhat unsatisfying.

The game had the same problem as Gemini: Heroes Reborn by not offering any default weapon. When an enemy appeared, I had to run back or around to look for a stone to pick and throw. Sometimes I picked up a rock in advance to be ready for the next enemy. That’s not a cool way to do this.

I was also really missing the obvious ability to fetch edges of platforms I was trying to jump onto. At one place I had to use terraforming to create a hill up to an edge, but it kept sinking back, making the edge harder to reach than it needed to be.

There were a lot of other details that contributed to the budget feeling of this game. Most of the NPC voices were overacting, the NPC kept talking even though I was obviously running away, and the prefabs looked like they had been modeled and placed in a hurry.

Cute game. A retro, flip-screen RPG with turn-based battles using either fighting or negotiation. It had good humor too, often of the unexpected kind. I could certainly see why everyone loves this game.

I was about to bail out within the first minute when I saw that the game appeared in a tiny window. Luckily a hotkey switched it to full screen. Only three keys were used apart from cursor keys – select, cancel and menu. A tutorial with a friendly guide showed me the ropes. The game had light puzzles, like pushing stones on buttons, and battles could spawn from anywhere while traversing the screens.

I didn’t play much further than past the big field of hidden holes. There were a bit too many drops down to the lower floor and making my way back for my liking. The holes in the field were just pure guessing.

Nevertheless the game did seem to be quite varied, and the music was also great. But it’s not really the kind I want to play on my desktop PC. It feels more casual, like it belongs on a mobile device.

This game is no longer available on the Steam store.

Several problems with this one. It felt crude and uninspired, and it was also bugged.

It was a sandbox game much in the same mould as Minecraft, a genre that’s not really me in the first place. It was gifted to me by a friend. This one took place at the bottom of the ocean after a submarine accident. Nearby I found a small base with an air pocket and a cooking apparatus. Now I had to find and excavate resources for expanding the base or getting something to eat. 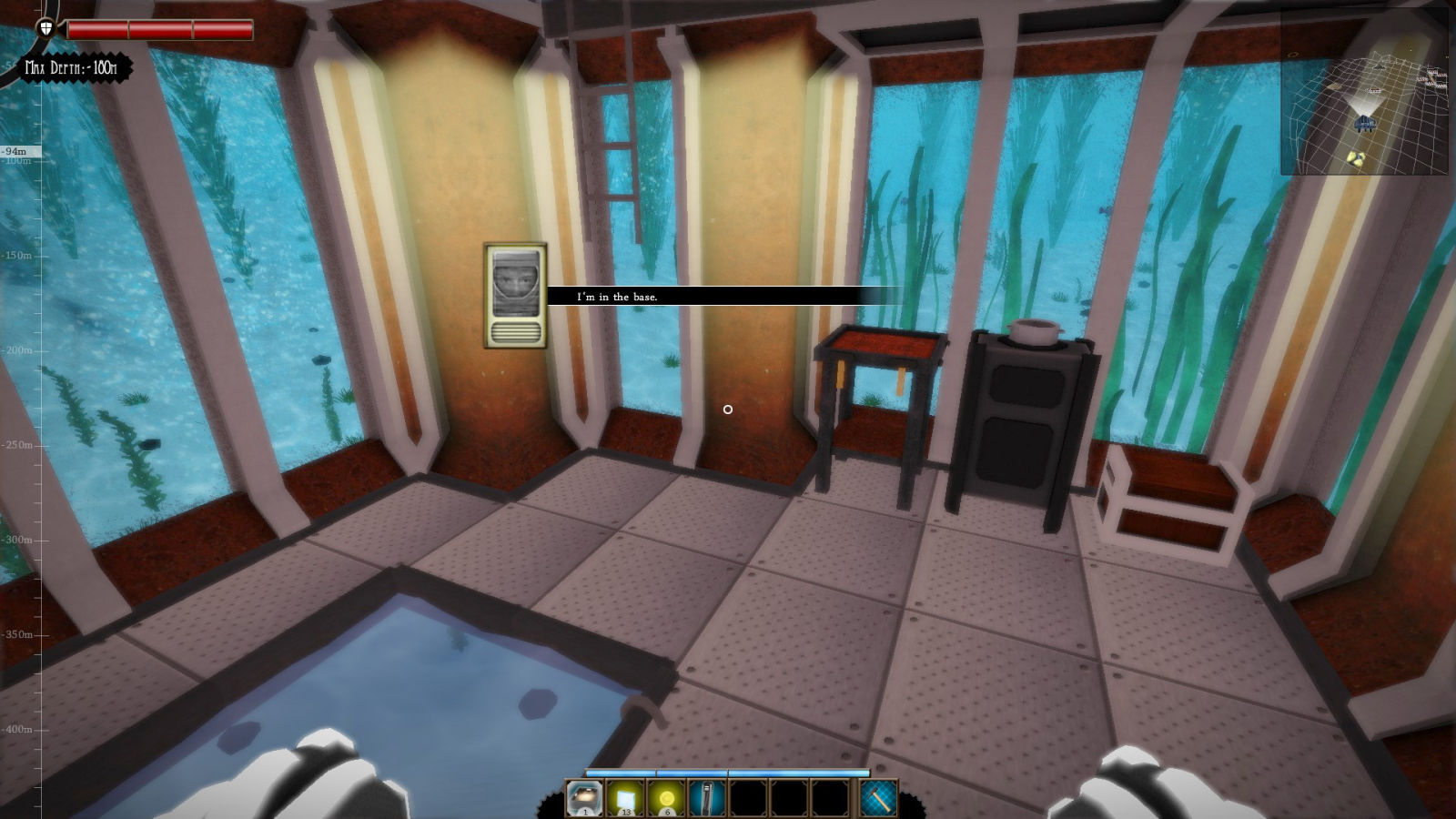 The first disappointment was that Java was required, so I had to download and install that first. Next, the full screen mode of the game only showed a quarter of it, which meant that I couldn’t see my action bar nor buttons to click in the options. I had to quit and start the game in a window if I wanted to see this.

I’m also not sure I really liked the movement. Instead of swimming around, I could only sort of jump up in stair steps about half a dozen times before I had to sink back to the ocean floor and recuperate.

It wasn’t all bad, though. The underwater environment was convincing in spite of the mediocre graphics, with lots of sea weed and fish. I also liked how my view cracked apart when I dropped down too deep.

Really interesting puzzle platformer here, which good steampunk 3D graphics seen from the side. I was playing as an inventor that looked like a grumpier version of Rufus from Deponia.

I really liked the way he used the ladders in this game. Bad ass.

Rufus had invented the watery fluros, which made havoc in his lab but could also assist in puzzles. These beings could be born in machines receiving water, after which they jumped around the platforms seeking intense light. This was typically used to lure them onto buttons for opening doors. Later, I also got the ability to drop a fluro seed where water could hopefully reach it and spawn another fluro.

The levels were often slightly bigger than a screen and required a little bit of scrolling. Lots of steampunk handles, big wheels and buttons matched by excellent “beefy” sound effects. Some of the wheels required me to circle around on the four direction keys. I didn’t have a problem with that, but no doubt this game would be much more suitable for a gamepad.

I played for about an hour, until I got to a big level with lots of spiky pads dropping down as fluros activated them. It was also the first place where I experienced dying. This restarted the level from a checkpoint.